A member of the godlike First, Evinlea has enormous power, probably more than has been revealed. She is stronger and more durable than she appears, with a far longer lifespan than mortals. She can:

She has shown herself able to encase a small area in a telekinetic field. It can hold in enough air to allow her and a small number of others to survive in a vacuum for a short period.

Evinlea is one of the lesser members of the First, the Godlike beings who claim to have created the planets. She was abducted by a hidden force, and sent to another universe. There she found herself stranded on a planet with 99 other individuals. These came from various parts of her own universe (the Bright Universe as the residents of the Negation referred to it).

Like the other powered prisoners, she found her powers didn’t work properly in this new universe, sometimes backfiring disastrously. But she also learned that one of the Sigil-bearers in the group, Javi, could prevent the backfiring and boost her power. She took him as a lover. As the most powerful of the prisoners, she established a hierarchy, with herself at the top.

One of the powerless prisoners, Kaine, convinced her that they had been brought here for testing by hidden observers. Thus, Evinlea eventually acquiesced to his tactical abilities. She commanded the rest of the prisoners to follow his lead. His lead led their captors to bringing them into the prison proper.

There the commander, Komptin, knew to separate Evinlea and Javi after her initial outburst. He put Javi in solitary.

Allowing Kaine to again take the lead, they broke out of the prison, freeing Javi as they went. They seized a craft, but it lifted off before most of the prisoners were aboard. Evinlea managed to take herself and a few others off planet in an air bubble. That was just before the Negation destroyed the planet to try to stop their escape.

They were rescued just in time by a passing vessel.

They stumbled across the other group of escapees on a lifeless planet. Evinlea immediately attacked them for their abandonment. But she found herself outmatched though. When Javi refused to help her she tried to use her powers without him, destroying her hands in the process.

Javi healed them. The hostility was then cleared up as being due to the stolen ship’s automated systems.

Before they could decide on their next course of action, they were attacked by Lawbringer Qztr, one of the elite of the Negation. After easily handling even Evinlea, Qztr apparently slew Javi. Qztr was distracted from killing them when he discovered baby Memi to be completely immune to his attacks. He abducted her and took her to the Negation god, Charon.

Evinlea and Iress surrendered to the Battle Group as a ruse to acquire information. Evinlea ingratiated herself to Murquade by apparently betraying Iress. She claimed that she was willing to trade the location of the others in exchange for a way home. 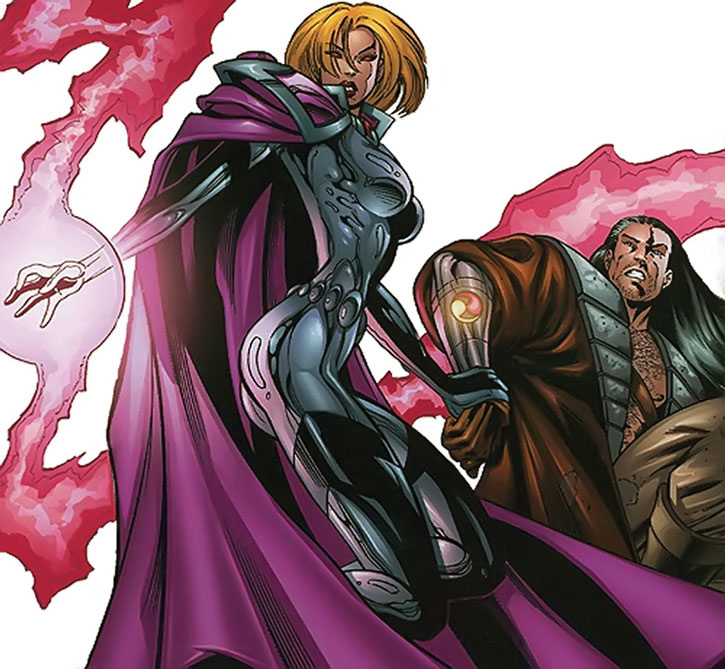 When Murquade contacted Charon to relay the offer, they could see Memi with him. Evinlea immediately sent a telepathic message to Kaine, which Murquade and Charon unfortunately overheard.

She duped Murquade into blasting Iress rather than her. Then, before Murquade could do anything to her, the Battle Group came under attack from the Australians it had been hunting. Taking advantage of the confusion, Evinlea found a portal back to her universe in the ship. However, Iress destroyed it before she could use it.

Iress rebuked her for her betrayal of Memi. She kept the scar Murquade’s attack had left her with as a memory of this, even though her half-First blood would allow her to heal it.

Allied with the Australians, the escapees rescued Memi, along with the Atlantean Gammid. However, Kaine was lost for a while.

Rescuing Kaine, they learned of a resistance movement against the Negation. But its head was imprisoned, and Kaine convinced them to try breaking him out. They attacked the prison, but found the resistance leader guarded by Lawbringer Lkqr. Lkqr proved devastating in battle, easily batting Evinlea around. He was only overcome when Matua sacrificed his life to slay the Lawbringer.

Finally freeing the prisoner, they discovered he was a renegade Lawbringer, named Blyq. He left with a number of his followers, thanking them for their aid. However, the cost of the mission further embittered most of the escapees against Kaine.

In the confusion, Evinlea slipped away from the others. She found the prison warden, and allowed him to escape to carry a message to Charon offering a partnership.

While re-supplying, Evinlea was separated from the others by a group. Charon had marked these people with Sigils similar to those on some of the other escapees. The group was led by Javi, now a fervent agent of Charon.

Catching her off-guard, Javi drained much of her power and life-force, soon drawing the attention of the other escapees. Battle was soon joined, but both Javi and Gammid were killed in the conflict.

Most of the escapees were now tired of Kaine’s leading them on an apparently impossible crusade against the Negation. They decided to find a quiet planet where they could try and make lives for themselves. This left only Evinlea, Lizard Lady, Zaida and Memi with Kaine. Evinlea then left, declaring she was going to make an alliance with Charon.

Destroying an entire city on one of the Negation’s inhabited worlds, Evinlea quickly gained Charon’s attention. She eventually seduced him into making her his consort. Evinlea then offered aid against one of the strongest impediments to his invasion: The First.

She joined him at the forefront of the invasion, enjoying herself by beating on a Superman-type Sigil-bearer on one of the first worlds. She was then assigned to lead a group of Lawbringers to the First’s homeworld, to deal with her kin.

Proud, arrogant and domineering, Evinlea expects obedience from her lessers. Thus, she only reluctantly agreed to follow Kaine’s ’suggestions’, when he appeared her best chance of escaping.

Prone to fits of temper, she’s often argumentative with the other escapees. Yet she did pass on a couple of opportunities to betray them in order to help herself.

She was initially reliant on Javi to keep her powers protected from the effects of the Negation Universe. As a consequence, Evinlea was one of the last to adapt to the changes.

“The name is Evinlea. But surely you already know that.”

“My kind created the universe ! Why should I listen to a common footsoldier ?!”

“The First kindled the stars and set the planets spinning. Ours is the power and the glory. Do not question my divinity. Consider it a blessing that I show any interest in you.”

[Facing a Lawbringer] “Time to die, you cosmic abortion !”

“Speak plainly, lest I un-create you.”

“Good luck, Obregon Kaine. Do not cross my path again if you wish to go on living.”

A collection of refugees from the mysteriously vanished New Genesis and Apokolips found a new planet on which to live together in an uneasy truce. There they renamed themselves ’The First‘.

Bonuses and Limitations:
Sealed Systems is Contingent on Telekinesis (-1), and has Area Effect (+1).

When she first arrived in the Negation universe, her powers were subject to the wild energies of the place. That lasted until she became used to them, or had Javi to rely on.

During this time, any attempt to use a Power runs the risk of a Catastrophic Burnout. The Burnout of an offensive Power results in Area Effect (1 AP Range) Energy attack centred on the character at the AP level of the Power, to which they are also subject.

Prior to allying herself with Charon, she didn’t have the Connection to him. She also had the Mistrust Drawback in the Negation universe. She only acquired the Language after being abducted. 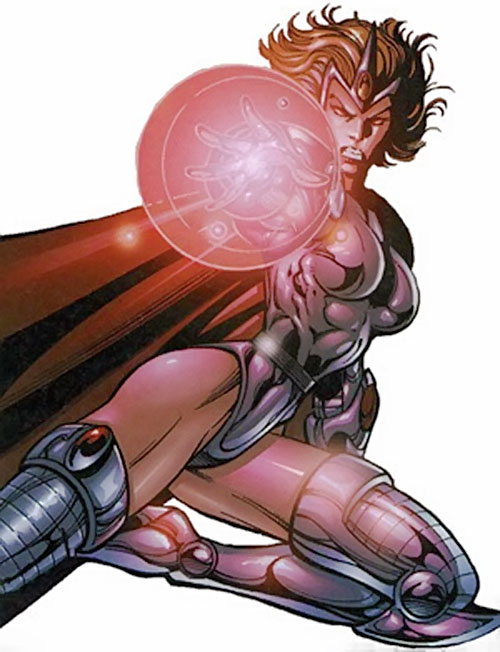 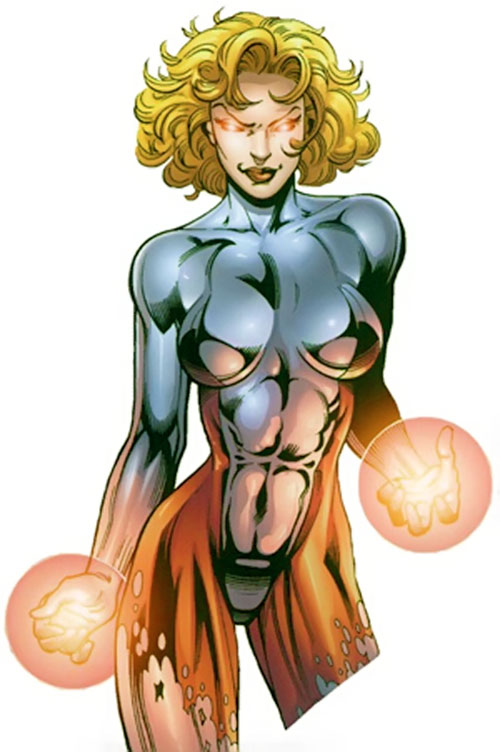 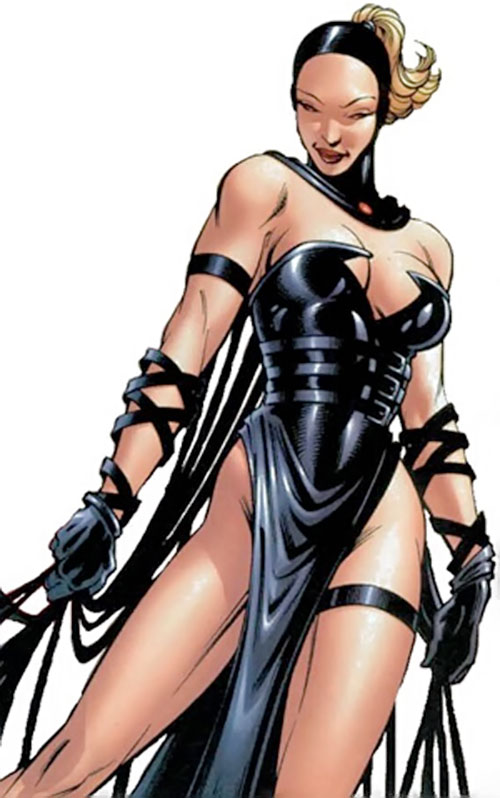