The Executioner has “the heart of a serpent, the power of a goliath, and the eyes of a hunting falcon”. His hybrid physiology makes him radically stronger and more durable than even a god of Asgard – not to mention taller and more massive.

The Executioner clearly isn’t as strong as Thor Odinson (or even Wonder Man (Simon Williams)). But he’s strong enough to challenge him in melee combat.

He was clearly stronger than the Valkyrie or Balder, and seemed to be in the same ballpark as the Thing (Benjamin J. Grimm).

His powerful physiology makes him nearly immune to disease, fatigue and temperature extremes.

Skurge’s odd hybrid eyes can discern details over great distances. Furthermore, he can process what he sees at a superhuman speed. Thus, spotting a specific face among a teeming crowd can be done within minutes.

Another since-forgotten minor power is making ordinary people around him run away in fear of his supernatural brawn. You can tell it’s supernatural because there are squiggly lines drawn around him when he does that.

The Executioner is a master of low-tech battle, an expert axeman and a solid but not overwhelming hand-to-hand combatant. He’s not as accomplished in melee combat as Balder the Brave, though. He’s markedly slower.

Skurge is impossibly stealth for a guy weighing a thousand pounds. He was also taught to fly Zemo’s aircrafts and to drive cars soon after Odin exiled him to Midgard.

The Executioner’s huge battle axe is made of impregnable, sharp Asgardian steel. It reportedly weighs 280 pounds. Its enchantments further give it magical powers :

The axe is tough but not indestructible. Hercules once broke the handle with thine enchanted adamantine mace, and a powerful sword strike by Balder also proved sufficient to the task. Destroying the blade would presumably be a different matter, though.

The Executioner’s gloves have their striking surfaces reinforced with “meteorite metal”. His big helmet has lil’ ornamental horns.

During his time as Casiolena’s co-ruler, Skurge was granted magical powers. The one he displayed was shooting heat beams from his palms, which felled Namor. He also had a magical axe that could shoot energy beams from the top of the haft.

These assets apparently did not survive his departure from Casiolena’s realm.

Skurge is the son of a goddess of Skarnheim (the same species as the gods in the city of Asgard) and a storm giant.

Reportedly ostracised by giants for his size, he took his revenge by becoming a great warrior and giant-slayer.

His merciless killings earned him the name of Executioner. As a giant-killer he became an ally of the military of Asgard.

(The data above is not mentioned in period stories. It appeared in his 1983 OHOTMU entry.)

The Executioner, with his grim disposition and mixed race appearance, wasn’t popular in Asgard. He kept to himself, living in an odd house in the countryside he presumably built himself. He apparently never mingled – since he did not remember such basic Asgardian facts as the worthiness enchantment on Mjolnir.

Skurge fell in love with the surpassingly beautiful Amora – aka the Enchantress. However she had little use for the brute’s unrequited adoration. Still, she occasionally asked boons of him, which he always granted in the deluded hope it might result in her affection.

In 1964, the Enchantress had Skurge go after Jane Foster in New York City. This was part of a plot against Thor. With his keen eyes, Skurge easily found Foster and banished her to limbo. Thor faced and defeated him, but the greedy Executioner said he would only bring Foster back if Thor gave him Mjolnir.

Thor complied, but Skurge discovered that he couldn’t fully lift the mighty magical mallet. Since Foster was back despite the Enchantress’ orders, Amora vindictively cursed the Executioner and would have killed him had Thor not intervened, sending both his foes back to Asgard.

They launched a series of classic plots against the Avengers, which bedeviled the heroes during 1964 and 1965. The Executioner and the Enchantress were also part of the army of villains that attacked the marriage of Susan and Reed Richards, but Mister Fantastic and Uatu the Watcher retconned  that out while the battle was still going on.

In 1966, the Hulk was cast into a distant future. There a more powerful Executioner was leading a high-tech army in conquering a futuristic city. The Hulk interfered, but was returned to 1966 before enough context emerged to understand what was happening.

When the Executioner next encountered the Hulk, he remembered the gamma giant. This means that Skurge was also a time traveller during their previous battle. From his words, it is possible that while in the future the Executioner won a limited right for him and the Enchantress to return to Asgard. Perhaps he was acting as a deniable asset for Odin.

For months the Enchantress left the Executioner behind in favour of other strongmen. First it was Power Man (Erik Josten) then a mesmerised Hercules (Herakles).

They were reunited in 1967 when the Mandarin recruited them both for a grandiose plan of global blackmail. The Executioner had recovered his signature axe and helmet, and was put in command of an army of Asgardian trolls.

Fed up with the Mandarin, Skurge and Amora abandoned the plan so they could duel Hercules (Herakles) and the Scarlet Witch (Wanda Maximoff) instead. They lost, but retained their new assets – including the army of trolls. 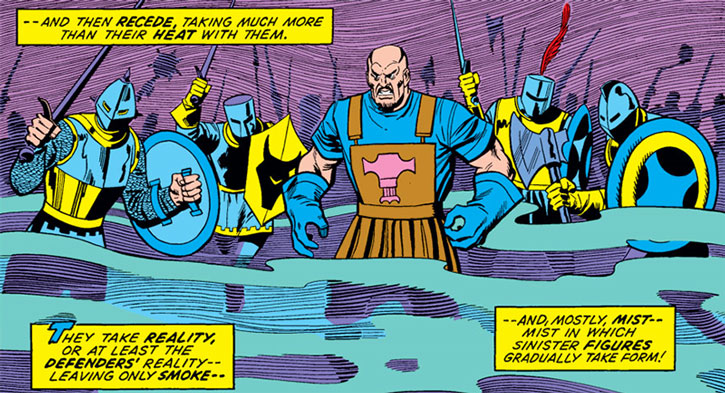 They soon led their forces in a surprise attack against the city of Asgard. The attack worked fairly well until the Hulk (Bruce Banner) intervened, wrecking the whole plot. The Executioner and the Enchantress were again banished by Odin, this time to a barren prison dimension.

In this dimension, a mysterious woman came for Skurge. She told him that she admired him and wanted to make him king. Having grown jealous of Amora’s attraction toward Hercules, Skurge took the offer and left the Enchantress behind.

This queen was one Casiolena, possibly the descendant of exiled Asgardians. Skurge co-ruled her kingdom until 1973, mostly concerning himself with training her army.

However the Enchantress, the Black Knight (Dane Whitman) and the Defenders (Dr. Strange, the Hulk and Namor) invaded. Skurge and his knights initially beat and captured them, but the newcomers broke free and prevailed – and the Enchantress defeated Casiolena.

Unwilling to command a defeated army, the Executioner agreed to leave with the Enchantress.

The Executioner is one of the few Asgardians not to wear a cape, since he carries his huge axe on his back.

The early Executioner is a sullen, arrogant brute. He likes masterwork Asgardian melee weaponry, bragging about his strength and immortality, and the Enchantress.

Though he personally prefers raw brawn, the Executioner often goes for crafty and underhanded when that better serves his interests. Notable examples include ransoming Jane Foster against Mjolnir, or stalling Thor by telling him that a battle between the Avengers and the Masters of Evil in the middle of Manhattan would surely kill many civilians.

However, if there’s a choice between his strength and the Enchantress’ magic he will go for his strength, presumably in the hope of impressing her.

The Executioner is also big on being merciless and willing to kill at the drop of a hat, as his name implies.

Though it’s not implied in the vintage material, later information reveals that Amora and Skurge were sex buddies. Or rather sex partners, since the feelings on Amora’s end probably didn’t even amount to friendship back then.

Skurge was aware that he was but a heavy and a sex toy for Amora when she didn’t have a better man handy. His violent emotions roamed all the way between adoring her anyway – to treating her with overbearing macho contempt. He would never actually leave her or harm her, though, and remained toxically dependent on her.

“Away, puny mortals !! Let none crowd about me ! Where the Executioner walks — he walks alone !”

“Mortal fool ! Your so-called treasure is meaningless to us !”

“Brute strength is the only answer ! The strength of the Executioner !”

(Fighting a giant) “I, who have slain the two-headed troll Travasaak, am not impressed by an oversized clod !”

“Hear me, Thor ! You have vowed never to harm a mortal ! But *think* ! Think of the scores of humans who will be injured if an all-out battle between our forces should take place here in the streets of the city !”

“Fall before my matchless battle axe !”

“The most savage warrior of all shall strike without mercy !”

Silver Age stories tend to feature one-off powers that are never demonstrated again. Here we have kept some of these abilities in the stats block, such as Superspeed and Aura of Fear. These are very situational and limited, so having the Executioner only use them once is logical. Having him do that again would just be a touch of colour.

Some one-shot wonders were kept out, though, due to the “that looked real useful, why did he never do that again ?” factor. The notable one during this era is as follows.

Skurge once slashed with his axe, releasing a strange invisible force that staggered the Hulk and started draining his strength. This effect is modellable as Numb: 17, with the target getting the Numb Recovery Check every Phase if the Executioner drops his axe. Its Range was probably limited to 0 APs and it presumably was Serious Marginal.

The Executioner’s Axe ● 26 points (Easily removable) ● Descriptor: Asgardian blacksmithing and enchantment
– Strength-based Slashing Damage 3.
– Quirk – the haft has a Toughness of 12 (the head would be closer to 22-ish).
– Slashes through space and dimensions — Array

If you’re using our uncapped scale: 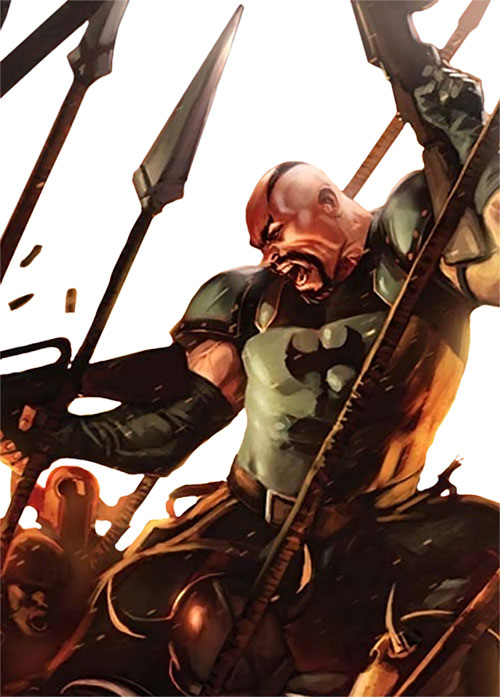 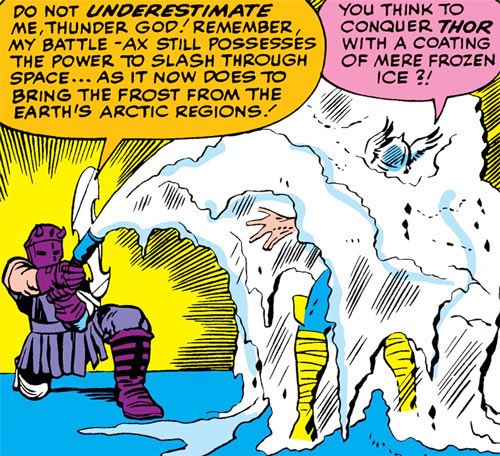 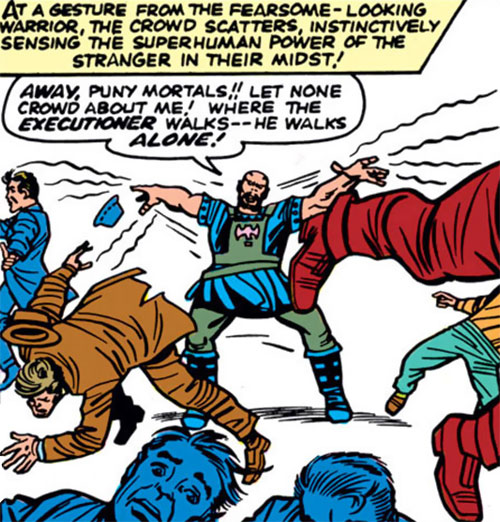 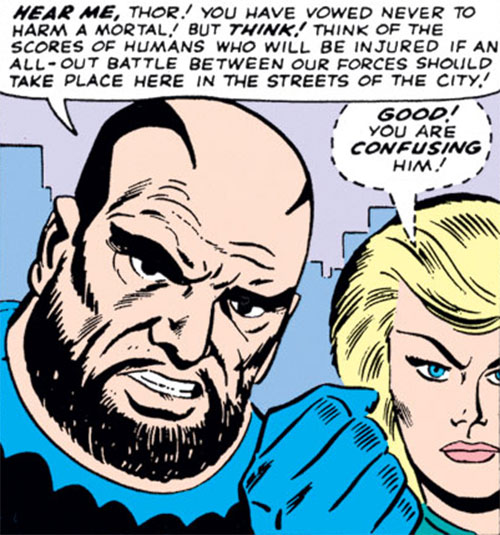 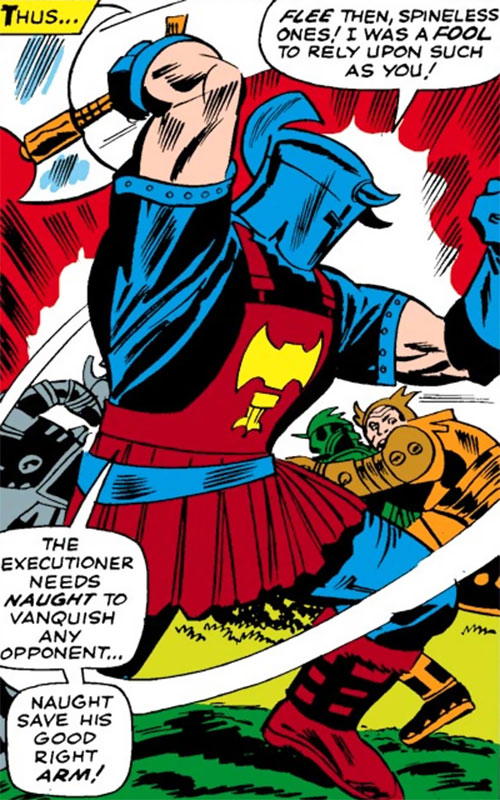