The Faceless One appeared to have some military and fighting experience. Its spherical body could move and climb rapidly using insectoid legs. Furthermore, said legs were sharp and able to inject a paralysing poison. The alien seemed to be undiminished when two of its legs were cut off, and there was no apparent bleeding.

The Faceless One called Humans “mortals”. Thus, it may have a very long or even perpetual life span.

The Faceless One’s main asset is its technology. It knows a lot of beyond-Earth-tech engineering, and can adapt to local resources. The technology it brings with him seemed to be about Victor von Doom– or Reed Richards-level. Howbeit, the equipment it can build on Earth is not to those standards.

Decades after its first appearance, the Faceless One remains a mystery. It was repeatedly stated that it had a plan for “[our] primitive world”, about which little is known.

It may have been just an umpteenth attempt at conquest from a megalomaniac space alien. Or it may have been more involved. From its actions, it is possible that the Faceless One is some kind of galactic arms dealer.

When it was first discovered, the Faceless One was secretly behind major political trouble in Latveria. Namely, it supported the 1970 Rudolfo coup attempt. Prince Rudolfo, the previous ruler, had been gunning for his successor, Victor von Doom, ever since Doom had taken power. Doom had even used a robotic duplicate of Rudolfo in a crowning ceremony, to give the impression of legitimacy.

Rudolfo had a significant number of supporters in the tiny country. But Doom’s troops, and especially his robotic guards, were undefeatable through conventional force.

The Faceless One armed and supported the rebellion. It :

Apparently, it desired to become the power behind the throne in a Rudolfo-governed Latveria.

You say you want a revolution

Thanks to the Faceless One’s technology (and the small size and centralisation of the country), the 1970 rebellion was successful. The rebels destroyed Doom’s robot guard and invaded the castle.

A key asset had been the discovery by the Faceless One of the Doomsman. This was a very powerful robot built by Doom and harnessing the Power Cosmic. The Faceless One convinced the confused Doomsman to fight against its creator. The mighty robot’s contribution to the assault was decisive.

But Doctor Doom proved to be a redoubtable opponent – even against Rudolfo, the Faceless One and the Doomsman. After the rebels all but conquered his castle and the Faceless One acted its systems, the undaunted Doom had it all self-destruct. This denied the rebels most of the resources they needed to rule.

In the wake of that move, the Faceless One considered that the Rudolfo ploy had failed. It disappeared into the Latverian countryside.

But the Faceless One didn’t renounce to his take-over of Latveria, though. It just changed allies.

The alien identified or triggered discontent among a sizeable number of Doom’s robots. Soon after the Rudolfo failure, the Faceless one was building up a robot army hidden in the countryside. All were former servants of Doom who desired a regime change.

Four of the Faceless One’s android allies fled to the US. They disguised themselves as Black guys and lived in a New York City African-American ghetto. The idea presumably was that Latverian secret agents were all White, and would be easy to spot if they approached.

Dr. Doom learned about this. One of his military officers hired Luke Cage to find the robots, confident that they would then attack the Hero for Hire. While that was a tough fight, Cage did prevail. But Doom weirdly refused to pay him, which led to Cage briefly associating with the Faceless One’s robot rebellion to obtain his payment.

In Latveria, Doom had replaced the defectors with human guards. But those men were no match for the rebellious robots when the Faceless One had them attack. The robots stormed the castle. They were accompanied by Cage, who was after his money.

However, when the Faceless One tried to kill Doom, Cage opposed it. That forced the alien to flee, leaving Doctor Doom to deal with the robot uprising. Doom prevailed, of course, and retained his power.

The Faceless One then apparently turned its attention away from Latveria. It would seem that it monitored Earth’s orbit for his next scheme. The alien rescued astronaut Salia Petrie after the explosion of the space shuttle she was on. Then it started monitoring the space station Drydock.

Apparently needing another human trained in aerospace work, he sent Salia Petrie (now under his mental control) to Manhattan. She was to bring back her best friend and former colleague, Carol Danvers.

But unbeknownst to the Faceless One, Danvers was secretly Ms. Marvel. She allied with the sole Guardian of the Galaxy on Drydock (the future version of Vance Astro) to thwart the Faceless One and rescue Petrie.

Though it was but seconds away from reaching Drydock’s computer core, the Faceless One was forced to warp back to “its own space”. The alien swore that it would return and have its revenge.

As of this writing, we’re still waiting.

The Faceless One looks like a smooth, opaque glass sphere (unless its legs are extruded).

It rode a headless android body. That gave the impression of being a dude with a large opaque fishbowl helmet à la Mysterio.

Manipulative mastermind manifesting massive megalomania. The Faceless One is completely convinced that it is intrinsically superior to feeble low-tech, soft-skinned Earthlings. Even after its defeats, it had trouble seriously considering the idea that some of them had technology and/or powers ably countering its best-laid plans.

It seems to only respect technological achievement, such as Doom’s top work. And the Faceless One was much more familiar with powerful robots than with powerful living beings such as Ms. Marvel.

As can be seen in the quotes, it talks real big. Bring a thesaurus . Though it can back its big speeches with technology and a solid store of Hero Points, the FO has no compunction against retreating to try another scheme whenever needed. It’s not a big fan of being hurt more than is necessary.

This profile didn’t originally include information from the species profile in the Marvel handbooks. We’re a bit reluctant to use information that isn’t in the actual stories. But not having anything at all does look odd, so here’s the skinny :

“You shall see my face soon enough, fool… when you grovel at my feet in the dreary dregs of total defeat !”

“Doomsman — this is the man who gave you life — the only man who might ever destroy you ! Smash him — defeat him — and if he will not yield then kill him !”

“Your cries are wasted ! The android has been conditioned by forces beyond your mortal ken, to obey none but — the Faceless One !”

“It won’t be long now. Your human will is a fragile thing — easily broken, provided one knows how.”

“You have forced me to return to my own space — my plans for your primitive world thwarted for the [third] time ! But I am a patient being. I will watch, wait, plan — and when next I return to Earth it will be in triumph !”

Bonuses and Limitations:
Acrobatics and Thief (Stealth) cannot be used whilst riding an android body.

Equipment:
The following is the Faceless One’s core equipment:

We got the gun

Beyond his core equipment, the Faceless One built or had access to a number of mission-specific weapons and equipment for his allies. Those included:

[BODY 04, AV 04, Projectile weapons (Scattershot): 09, Sharpness (Projectile weapons): 02, Ammo: 10, R#03]. Some sort of advanced firearms firing a high performance APEX round. Gunfire from those could reap Doom’s standard robotic guards. The ammunition exploded on impact with devastating result, often taking down two opponents at once if bunched together. Even inexperienced shooters had excellent results with those guns.

The pro-Rudolfo troops numbered at least two hundred and quite possibly more, so it is likely many of those guns and ammunition are still around. Those weapons couldn’t hurt Doom with his force field on, though.

[BODY 02, Flight: 06, R#02]. Flash Gordon-style jetpacks, called “flying belts” for some reason, used to equip Rudolfo and his elite partisans. The vast majority of the footsoldiers was just walking or riding jeeps.

[BODY 03, Force field: 06, R#03]. Apparently a weaker version of the one used by the Faceless One, given to Rudolfo. It efficiently protected the Prince from Doom’s robots’s return fire.

[BODY 03, Force shield: 04, R#03, Limitation: Force shield is only effective against Ranged Attacks]. This module was installed in the POWER ARMOUR  [/STR/ 10 /BODY/ 10] the Faceless One gave Salia Petrie.

[DEX 06 BODY 02, EV 12, Flight: 08, Grenade drawback, Limitation : Flight can only be sustained for nine Phases (-2)]. Persistent missiles that will chase their target around, but are intended for short range use and can operate in relatively confined environments. Petrie was equipped with at least two of these.

[BODY 04, Control (No Range): 14, R#02]. These small devices are implanted at the base of the skull, where they instantly wire themselves into the central nervous system and turn the subject into a slave of the module’s owner. Yes, it was a Claremont story.

Humanoid body ● 35 points (Subtle) ● Descriptor: Technology, robotics
– SIZE M, STR 09 Speed 2 Defense 10 Toughness 10.
– Personal force field — Protection 8.
– Heavy — Feature 1 (3 Ranks of body mass).
– Quirk (prevents the use of Stealth, Athletics and most of the Xenospheroid body Effects.)
– Feature 1 (includes a space for a powerful self-destruction charge. This will normally be empty unless the Faceless One adds one as part of a specific plan.)
– Feature 1 (can be remote-controlled without visible equipment by the Faceless One).

Omnisphere ● ? points ● Descriptor: Technology
A flying, spherical ship looking a bit like the Faceless One itself. Performances unknown, but it could emit fog to disguise itself as a cloud and had strong Concealment (Only vs. radar) plus various sensors, including telescopes, as well as loudspeakers. It is at least capable of reaching orbit.

Unexpected escape ● 12 points ● Descriptor: Technology
Variable 4, Slow, Limited (only to escape), Limited 2 (one use per adventure).

Psychic control module ● 13 points ● Descriptor: Technology
Affliction 13 (resisted by Will, dazed/compelled/controlled). These small devices are implanted at the base of the skull, where they instantly wire themselves into the central nervous system and turn the subject into a slave of the module’s owner.

* Without Defensive Roll.
** When riding the Humanoid Body.

Beyond his core equipment, the Faceless One built or had access to a number of mission-specific weapons and equipment for his allies. See the DC Heroes stats for additional data.

Each missile is a Minion with Close Attack 9, ballistic Damage 11, Flight 7 Dodge 10 Parry 10 and Limited 2 (can only do one attack then disappears, and will disappear in any case after 9 rounds) ● 14 points 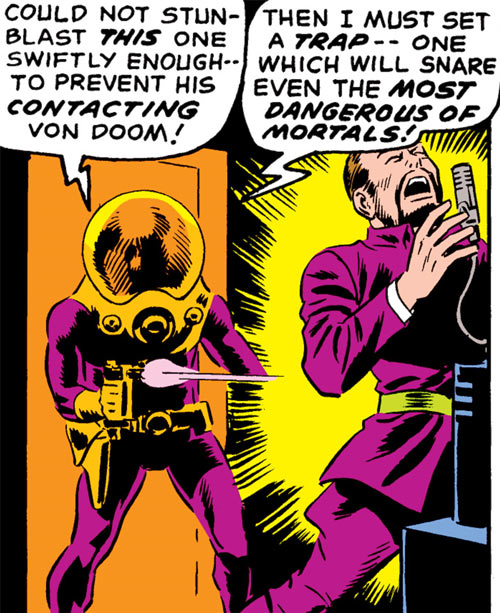 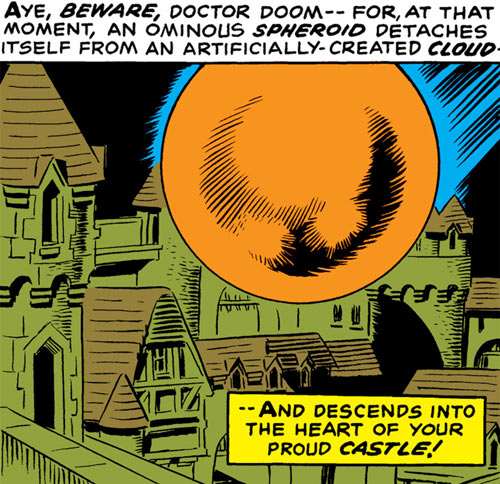 Rudolfo rebels with Faceless One guns : 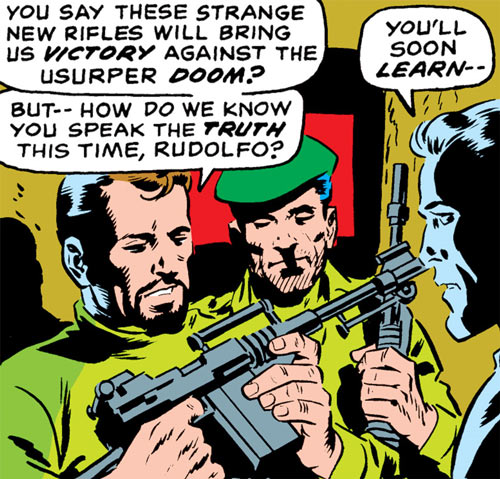 Latverian robots serving the Faceless One : 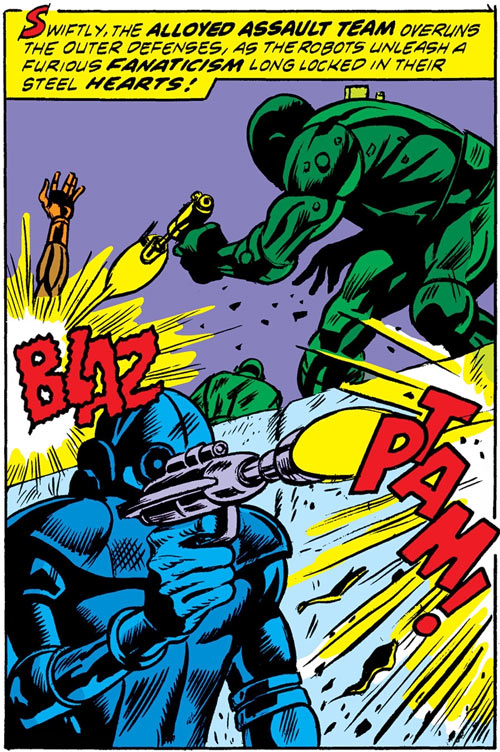 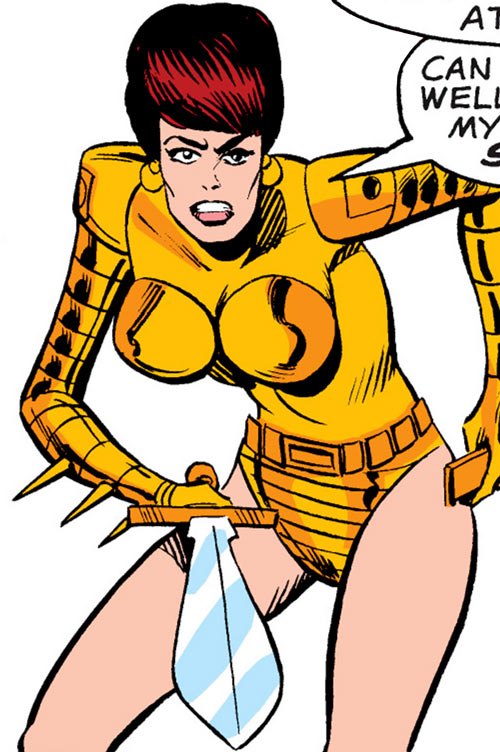