Whereas most objects exist at one point in time, Fade exists as a wave packet. He’s spread out over a period of three seconds. Thus, Fade is semi-transparent and intangible unless he concentrates.

This also gives him a limited form of precognition (in DC Heroes RPG terms, Danger Sense) and the ability to attack while dispersed, albeit with a delayed effect.

Fade is a Bang Baby. That is, a gang member who received superhuman powers in the wake of the Big Bang. The Big Bang was supposed to be a rumble between all of the major gangs of Paris Island to settle their turf wars, once and for all.

However, the Dakota City Police Department learned of the impending showdown and developed a special tear gas that also contained a radioactive marker. Their plan was to use the gas to break up the Big Bang and then trace the gang members down the next day by tracing the radioactive “tags.”

Instead, most of those exposed to the tear gas died. And the handful of surviving gang members that lived had all developed superhuman abilities.

One of the Bang Babies, Rolando Texador, took the name Tech-9 after his favorite type of pistol. He gathered his fellow survivors together with a proposal. Tech-9 wanted to form a new gang, the Blood Syndicate, with the aim of achieving substantive positive social change. They took over an abandoned door factory, which they simply dubbed The Factory.

Operating from The Factory, the Blood Syndicate smashed crack houses throughout Paris Island. They were trying to rid the neighborhood of the dealers while taking the money captured in these operations to fund their activities.

In the course of their work they would acquire new members, and put an end to many threats in Paris Island. Fade and his sister Flashback were two of Tech-9’s first recruits.

Fade’s time with the Blood Syndicate was emotionally turbulent. He was trying to rebuild his relationship with his father, with whom he was estranged. Carlos was also watching out for his sister, who was struggling with an addiction to crack. And all the while, he was trying to come to terms with his sexuality and the fact that he slowly fading away. 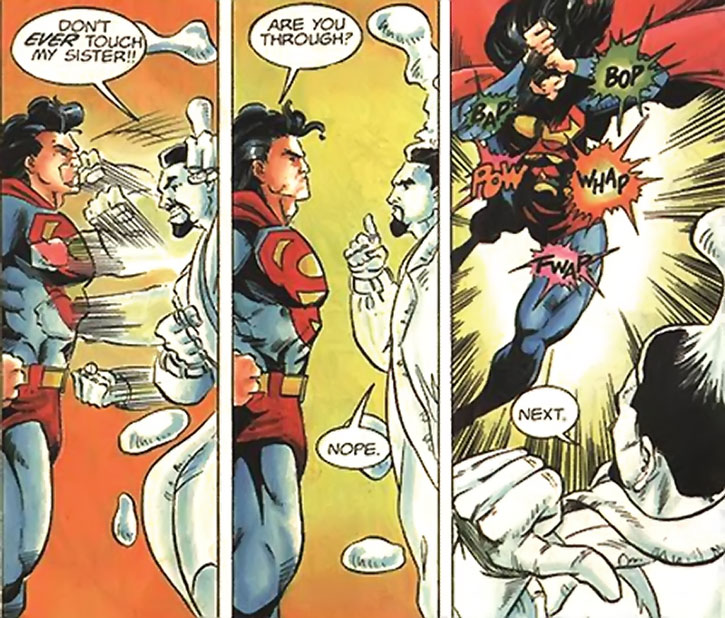 The conflagration consumed Holocaust, leaving naught but a skeleton behind, while leaving Wise Son unharmed. Having earned the Blood Syndicate’s respect anew, Wise Son took leadership of the reformed team with a promise to focus on fighting for justice.

Fade is a handsome Hispanic man with a neatly trimmed goatee and flattop haircut. He tended to wear white suits with a white trench coat.

Fade is protective of his friends in general and his sister in particular. He has angry outbursts at times due to:

Fade’s altruistic nature is readily apparent to those who spend any time with him. Icon believed that of all the Blood Syndicate members, Fade had the most potential to be a hero.

Fade: “Yo !! That’s my sister you’re messing with ! Don’t EVER touch my sister !”
(Throws a flurry of intangible punches at Superman)
Superman: “Are you through ?”
Fade: “Nope.”
(Punches take delayed effect, pushing Superman back slightly)

Fade and his sister Flashback could be encountered individually, perhaps as metahumans who acquired their powers during one of DC’s numerous temporal disturbances (The Crisis, Zero Hour, the upcoming Crisis in Hypertime , etc.).

Advantages:
Area Knowledge (Paris Island), Expansive headquarters (The Factory, though the Blood Syndicate may have a new base of operations after its disbanding and subsequent reformation), Language (Spanish), Sharp Eye.

Fade’s dispersal is a cumulative process, growing a little more every day. If you wish to represent this gradual fading in a campaign, have Fade make an attack once each day with half of his current Dispersal score, rounded down, as AV/EV and his MIND as OV/RV. Any RAPs he takes as a result are added to the *HPs* of Dispersal.

When he reaches enough HPs to raise Dispersal to the next AP level, apply them and continue. When Fade reaches Dispersal: 18, he will completely and permanently dissipate. Fade cannot use HPs to boost his OV/RV or for Last Ditch Defense when making his daily roll.

Due to the temporal nature of Fade’s powers, he occasionally has Power Complication Subplots relating to time. These often involved him returning to his past, albeit in a completely incorporeal and invisible form where he is naught but a helpless observer.