Fahrenheit’s general abilities have not changed. However she has grown in experience, power and competence.

She’s no longer a rookie, but a proficient super-heroine.

Henry Bendix then returned as Weatherman. He reorganized StormWatch. Fahrenheit was promoted as the leader of a unit called StormWatch Red, commanding Flint and Rose Tattoo.

She barely had time to slip into a new, white and red body suit before StormWatch Red and StormWatch Prime (Winter’s unit, tasked with taking down major threats) were deployed. They were sent against Father, a thoroughly insane artificial German superhuman whom they eventually had to kill.

Though things were never “good” for StormWatch, they started turning into a new kind of bad. It slowly became apparent that Bendix had a sinister and possibly insane agenda.

Furthermore, it emerged that the UN was partially controlled by a secret cabal of billionaires called the Special Security Council. The SSC was the only reason why the chronically underbudgeted UN could afford StormWatch and SkyWatch.

Further, to Pennington’s distress and anger, StormWatch started getting into conflict with the American administration. And it slowly apparent that StormWatch Red had been assembled to eventually serve as a weapon of mass destruction.

When the High woke up and decided to change the world, StormWatch Red was on leave. They were immediately reactivated by Bendix, and participated in the catastrophic battle against the High’s allies.

To her dismay, Pennington was then heavily involved in countering a series of American terrorist plots involving bio-weapons plus spooks, police and soldiers with low-level genetic enhancements. The International Operations intelligence agency was behind most, if not all, of those. During that time she became romantically (or at least sexually) involved with her colleague Hellstrike.

StormWatch ran into a crisis after they confronted a version of themselves from a parallel universe, and was left shaken. While Fahrenheit was not personally affected by those events, these were a strange forerunner of the impending destruction of StormWatch.

In space, no one can hear you scream

A StormWatch human crew was planting explosives on a large asteroid on a possible collision trajectory with Earth.They were attacked and killed by xenomorphs, and several aliens at the facehugger stage were taken into SkyWatch for analysis. Soon, aliens slaughtered everyone inside the station, popping up so fast that the troops and superhuman operatives did not have a prayer.

Fahrenheit was disemboweled and killed by one of the aliens. The creature kept her corpse and somehow started replicated her DNA, giving itself the ability to belch streams of flame.

The only survivors on SkyWatch were Battalion (then the Weatherman of the organization), Synergy, Winter and about 30 soldiers, technicians and scientists. The WildC.A.T.S. teleported in and helped rescue the survivors. Then Winter sacrificed himself and destroyed the alien infestation by piloting SkyWatch straight into the Sun.

StormWatch was eventually reconstituted by Battalion and Synergy, with a limited budget. Since the WildStorm universe went through a “soft reboot ” at that point, it is unclear as of this writing whether the events in The Monarchy and StormWatch Team Achilles were in continuity.

The tiny StormWatch team had Strafe, Cannon and Blademaster as their operatives. They were assisted by a small Stormforce unit of human commandos.

Later on, the new Doctor contacted Battalion. He told StormWatch that he could bring Winter back. The Authority had previously discovered Winter was still alive and had been turned insane by the power he had absorbed while within the sun. Their first attempt at rescue had failed.

However, the new Doctor thought that he could achieve what his predecessor could not. The second attempt took place, but the Doctor discovered that three other people were somehow linked on a quantum level with Winter. He had no choice but to bring back Fahrenheit, Fuji and Hellstrike, all as they were moments after the fatal blows struck by the aliens.

The Doctor saved everyone, healing these wounds. Fahrenheit stated that she had felt the presence of a mysterious man as she died, linking her existence to Winter’s.

The four miraculously recovered operatives and the previous three members formed a new StormWatch superhuman field team. However, Fahrenheit would soon ran into yet more trouble.

Pennington joined StormWatch since she felt responsible for having powers and having been born in a “really safe country, a good country”. She thought that she had a duty to assist less fortunate people over the world.

Both her well-meaning nature and her feelings for her country were roughed up by her time in StormWatch Red, and she started becoming somewhat bitter. She hated the games of death and deceit run by organisations such as I.O. in her country’s name.

Perhaps to compensate, she started spending a lot of time trawling for men in Manhattan, along with her team mate Flint. She seemed quite successful in those endeavours, and generally enjoyed an active sex life.

After the fights with IO, she became even more disillusioned. She came to profess a blanket dislike of patriotism, spooks and soldiers. She reacted angrily whenever she discovered American agents working on criminal or anti-UN goals, feeling personally betrayed. It later receded, presumably as she realized IO did not represent the whole of the US administration.

“How many people have you killed today, you bastard ?”

“Anger ? You think this is about my being angry ? I’m ashamed !”

“I don’t know if I can do this. This isn’t what I joined StormWatch for.”

“Yeah, well, I’m American too, Vicky, and I’m sick of us being the easy target in these things.”

“Don’t move ! You’re impeding an official United Nations security action — you will not radio in or — don’t MOVE goddamn it !” (FWOOOSH !!) 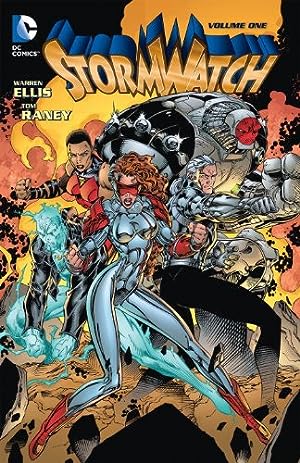 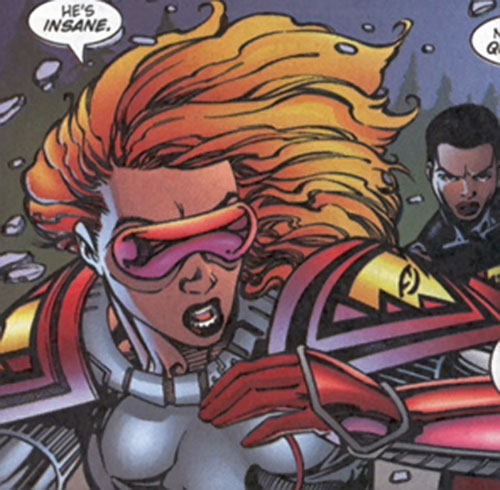 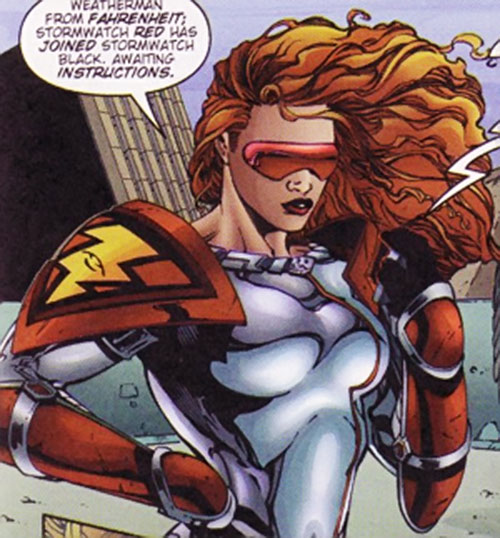 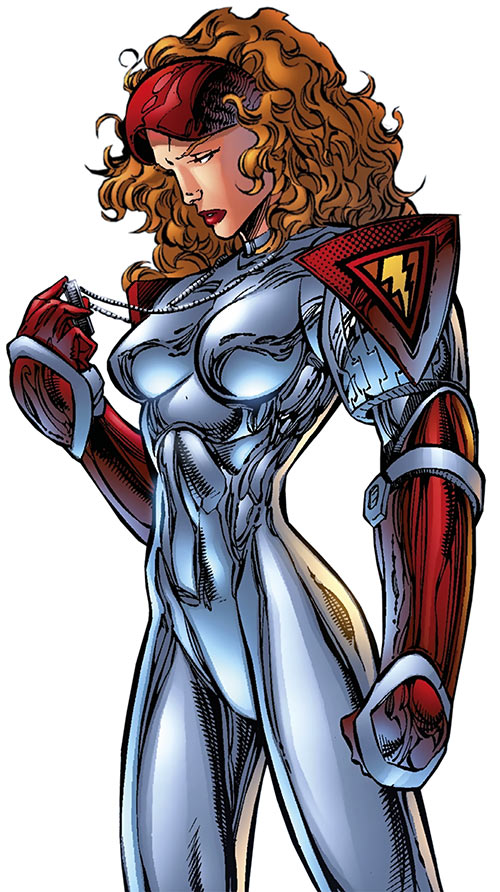 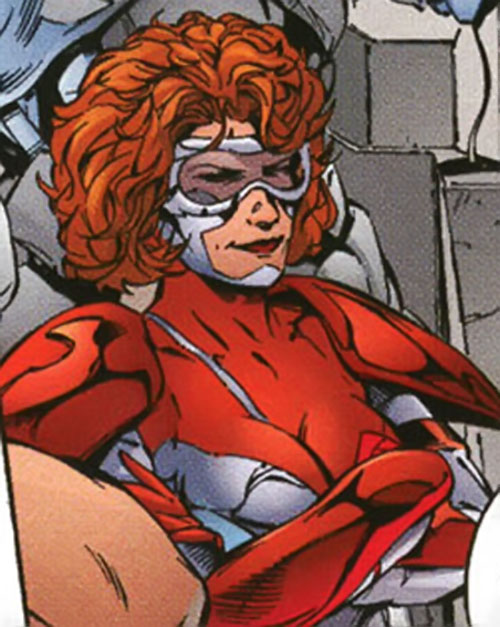 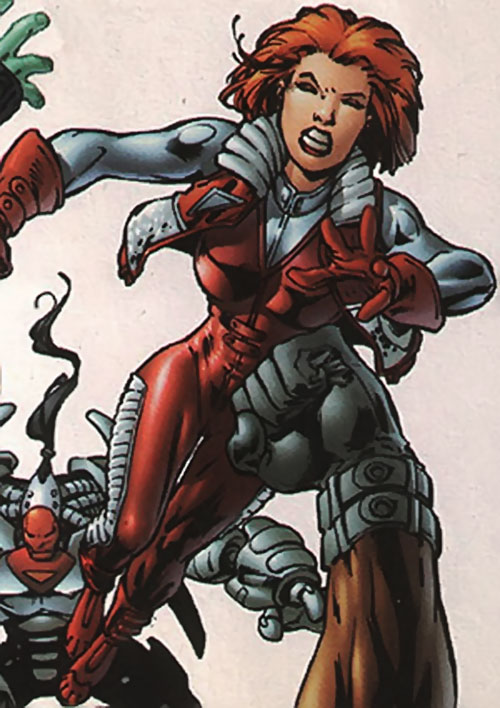