Fairchild is a Gen-Active 2nd generation, child of a member of the Team 7 who were the first exposed to the Gen-Factor. The manifestation of her powers developed her body to superhuman proportions, giving her extraordinary strength, agility and resistance. As a side effect she gained a highly idealised physique.

She shares a bond with Freefall, when one is hurt, the other knows it.

Caitlin Fairchild was living with her relatives, as her father had supposedly been killed in action. Once, instead of spending a summer with her aunt, she decided to take part in a special training program the government proposed her. This was called project: Genesis.

As she was a high school student in computer physics, she saw it both as an opportunity to earn some cash and to get an easier access to college. At this time, she was just a shy, glasses-wearing computer geek.

The more she got involved with Project: Genesis, the more she suspected something wrong. Eventually she got so frightened she manifested her powers. The manifestation turned her as the hottest 6’4″ Amazon ever, with endless legs and everything.

Trying to escape I.O.’s compound, she and her four Gen13 teammates teamed with one Threshold. He wanted to put them under stressful situation for everyone to manifest their powers.

Threshold thus convinced the others to go back to I.O. to take them, but Caitlin thought it better to stay off. This lasted until the link with her Freefall kicked in, making her feel her distress, and she got back to save their butts.

(Fairchild and Freefall would later learn that they are sisters, explaining the psychic link. Well, for some values of “explaining”. You know what I mean.)

This time, veteran intelligence officer Lynch guided them through their escape and accompanied them on the run from I.O.’s goons. They settled in one of Lynch safehouse in La Jolla, California.

Caitlin wanted to know about her father’s death, and started to dig I.O.’s and Lynch’s dirt. This led her and her party to the lost Isle du Mystère near Madagascar, where she confronted a Coda shrine. Needless to say, the Amazon was not out of place there.

She didn’t find her father, but she had contacts with pirates that passed the word to Alex Fairchild.

After the “Fire From Heaven” crossover, where Alex Fairchild reappeared, he told her that he was her father. But she could never get along with him, not accepting his excuses for abandoning her. Furthermore, it went ugly as he couldn’t find the words to sort it out, and stuck to his old mercenary’s ways. They parted again.

Lynch paid for them all to attend the local college, where Fairchild was dragged in a campus sisterhood that looked down their nose on her (metaphorically, of course). This lasted until I.O. found them and they went on the run again, thanks to the sacrifice of Anna, the android maid, who stayed behind to cover their escape.

They ended up on another island, where Lynch’s contact had lost men in unexplained circumstances. The island was populated with gigantic specimens of Earth fauna.

This was due to the presence of an alien spacecraft in the volcano of the island. While investigating the craft, Grunge, Freefall and Fairchild were abducted by the aliens. They manage to escape their grasp, had a first encounter with the D’rahn, and came back to Earth… 20 years later.

In this time, the D’rahn were launching their final assault on Humanity’s last rampart, the I.O. building in NYC, under the command of Lynch, helped by Sublime of DV8 and the remnants of Team 7.

Lynch had an angle to get rid of the D’rahn, launching a virus that would kill them all, and the humans as well. Fairchild teamed with Grifter, Rainmaker’s and Burnout’s children and other superbeings to defuse Lynch plan. In the process, they manage to take Lynch’s place through a time portal to go back to their time.

Back to the present

They arrive in I.O.’s building of NYC (of course, time travel doesn’t make you move an inch) in the middle of an assault led by Lynch to try to delete I.O.’s files on Gen13. As it was turning FUBAR, they aborted.

But since her witnessing of Lynch’s actions in the future, she could not trust him anymore. Caitlin further ordered Grunge and Freefall to keep quiet to prevent the team from falling apart.

When Freefall and Rainmaker went back to NYC to see Roxanne’s mother, they were trailed by I.O., and Lynch sent Alex Fairchild to save their butts. That’s when Roxanne’s mother recognized the father of Freefall. She and Fairchild are thus half-sisters.

Lynch wanted to take some distance from the teens and let his buddy Alex Fairchild take the lead, so he could, at last, have time with his daughters.

Then Caitlin was the target of the crippled mad scientist Tindalos, who fell in love with her at first sight. She had to fight his alliance with I.O. and the alien technology he had provided them.

Furthermore, Alex Fairchild was in the middle of an abduction at the hands of Cordelia, a Coda leader who had allowed him to free himself from I.O. in the old days. As he hadn’t paid his debt to her, she was getting him back. Fairchild and Gen13 were disposing of the Coda when Tindalos struck.

In the final fight, Alex Fairchild let go of his powers to destroy Tindalos, but it killed him too. Fairchild took over after the death of her father, but had much more difficulties about it than Roxanne.

Then the life of teenager superheroes went back to day to day business.

Fairchild is the ultimate babe of the Wildstorm Universe. When fighting, she wears a green and violet body glove – a garment that is quickly torn to pieces after she got the first shot/punch/blast… Half of Lynch’s budget must go to buy her spare clothes, as she can keep them in one piece either.

Caitlin is smart, calm, dedicated and caring. As she spent most of her life in studies, she had very little contacts with other people, especially boys. She’s the kind to trust people at first glance. But she’s a vestal virgin, and intend to stay right that until she finds Mister Right.

As leader, she feels responsible for the well and wrong doing of her teammates. And it’s because Lynch felt it that he appointed her leader.

“But now, at 6’4” and superhuman, any temper tantrum of mine could kill people”

Her Dex, Str and Bod are powers given by her Gen-Factor manifestation. They could be Neutralized as such, down to her pre manifestation form. Her Mystical stats comes both from the self confidence and the attractiveness she gained with her increase in size and physical appearance.

Her former size, weight and appearance cannot be regained anymore, even if her Gen-Factor is completely neutralized (it happened several times and she stayed tall and good looking).

These were the stats for Fairchild before she manifested her Gen Factor powers. She was shorter, underweight and not as attractive as she is today. 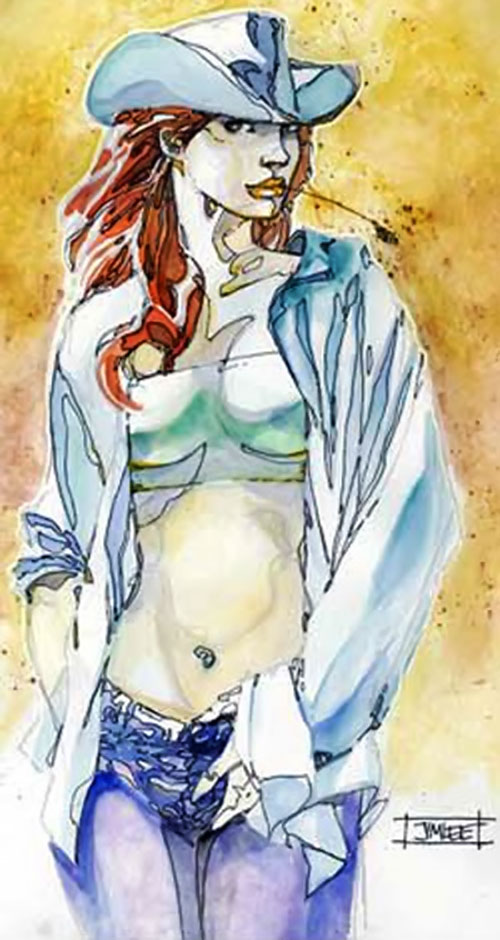 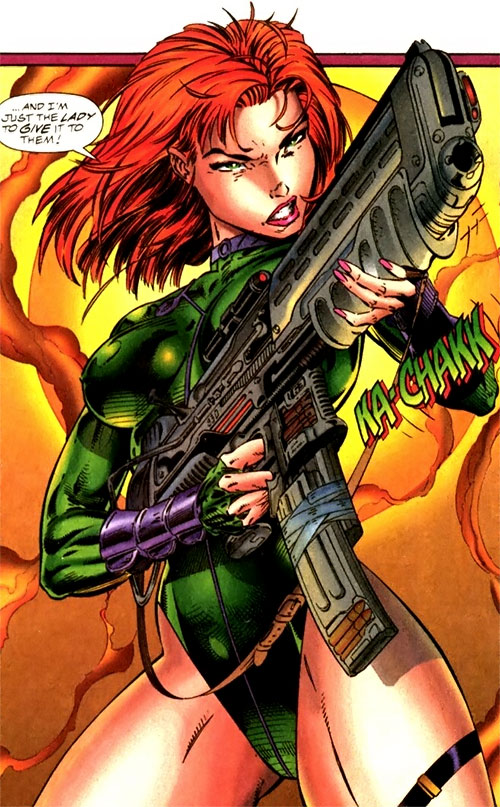