Faker was He-man’s evil duplicate in the 1983-1984 He-man and the Masters of the Universe cartoon series.

The header photo depicts a much more recent — 2019 — version of the figure. It’s from Toy Ark News  .

In Faker’s original design, he was blue-skinned and wore armor like Skeletor’s. His back-story was that he was a robot built by Skeletor.

Yet, when Faker appeared in the series, the ever-financially conscious Filmation changed the design. He would be an exact replica of He-man with glowing eyes and a hollow voice. In this way, they could use existing He-man character slides instead of creating new ones.

His action figure, on the other hand, caused confusion. It kept the original blue-skin, orange hair, and purple armor.

A near-exact copy of He-man, Faker claimed to have power equal to He-man’s. And when they clashed, he did prove that his strength was a match.

He even used similar moves and fighting techniques.

At a distance and low lighting, Faker can act well enough to fool even He-man’s close friends. 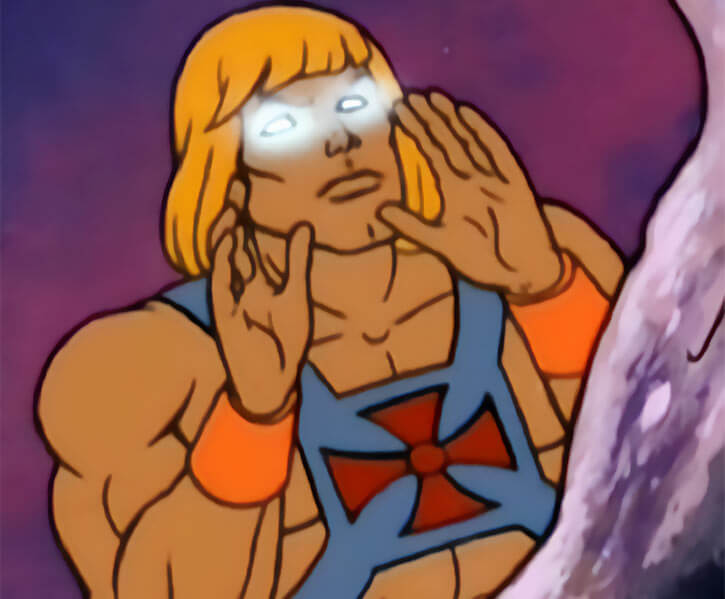 Skeletor’s magic created the being Faker from nothing. He followed Skeletor’s commands and pretended he was He-man.

Faker lured the Sorceress of Grayskull out in the open. Evil-Lyn then ambushed her, using the Shaping Staff to transform her into a tree.

He-man telepathically conferred with the Sorceress. His words gave her the confidence she needed. The Sorceress fought back and freed herself of the Shaping Staff’s spell.

She then released He-man from the staff’s power, as he had been transmuted into gold.

He-man and Faker grappled briefly before Faker tossed He-man aside. He-man responded by throwing a boulder. Faker punched it into rubble, mid-flight.

He-man charged and was duped into falling into the bottomless abyss. However, he caught the ledge. Faker glared down at him.

He-man reached up and grabbed Faker’s leg, tossing him aside and making space. Then he climbed up.

Faker lunged at He-man. But a quick move sent the impostor into the Bottomless Gorge.

Skeletor mentioned he could bring Faker back using the Shaping Staff. However, the staff was broken. Faker was therefore never seen again. 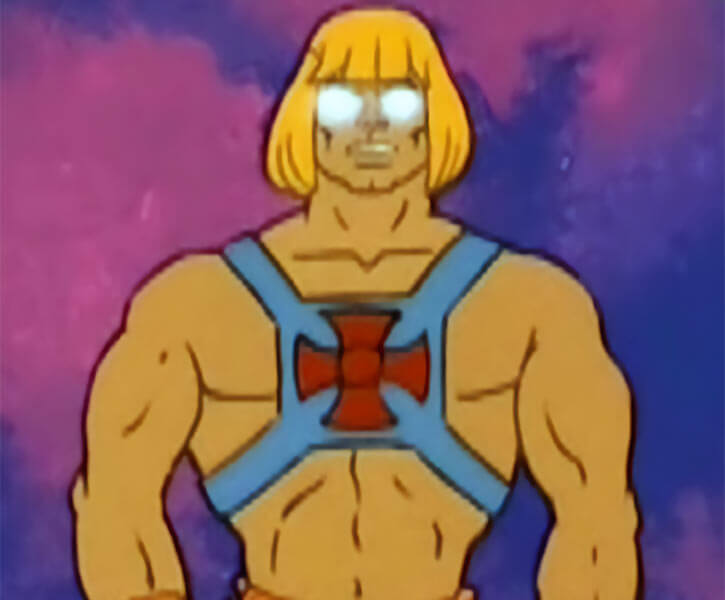 Faker looks just like He-Man – a doppelgängerEerily exact double of a person. Often supernatural and evil.. He doesn’t have the Power Sword or its scabbard. His eyes have a slight white glow around them betraying his true identity.

Faker’s voice sounds almost mechanical but still like He-Man’s. Perhaps a nod back to his planned origin as a robot.

Faker fell right into his role as minion. He took Skeletor’s orders well and did his best to defeat He-man.

His short screen-time revealed little in the way of Faker’s personality.

Skeletor: “I will make another He-Man, an evil one called “Faker” !” (laughter as his creation appears out of thin air) “I have done it ! A perfect likeness of He-man, sometimes my power even amazes me.”

Faker: “You forget, He-man. I have your power too.”
He-man: “Let’s see how well you can use that power.” (Tosses a boulder at Faker. Faker smashes it with a single punch.)
Faker: “How do you like that, hero ?”
He-man: “I don’t like it Faker, and I like you even less.”

For those who like the character, here is a well-made fan-made movie called “Return of Faker”. It seems to be a work in progress that may never be allowed to be completed. Produced by James Eatock (Dusan Mitrovic).

The Will of Skeletor. 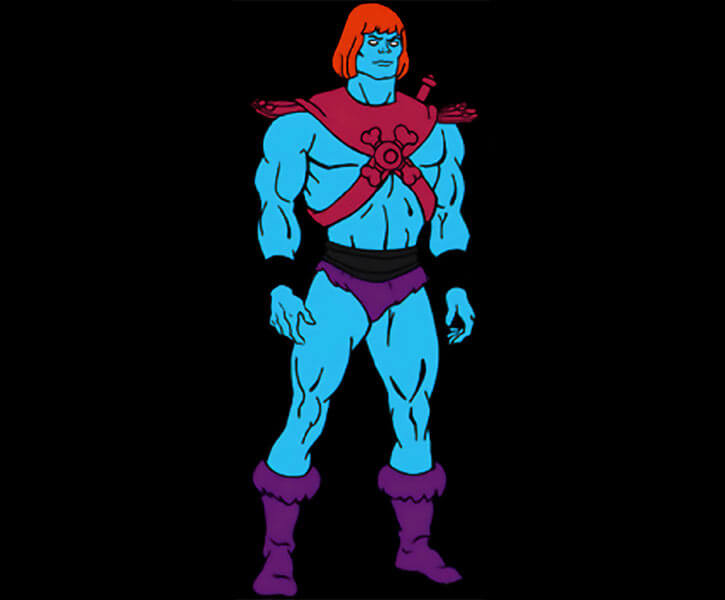 Faker likely has similar powers to He-man. But with his short appearance, it’s unknown. He only appeared for the last 5 minutes of the episode “The Shaping Staff”.

I had Faker’s Artist AP level at 03 APs but decided to add some detail with a limitation about his eyes. The Sorceress couldn’t see Faker very well. Skeletor mentioned the shadows would help in his fooling her.
So, I raised his Artist skill equal to He-man’s but gave him the -1 CS if an opponent is looking at his glowing eyes.

Faker’s prototype action figure had red eyes but when released they were black.

The Indian Leo Toys variant had very different eyes and also came with an orange Havok staff. Really, I can only guess at why Skeletor would give Faker a fake Havok Staff.

Source of Character: The 1983/1984 animated series He-Man and the Masters of the Universe Season One Volume One. Voiced by John Erwin.