Sam Wilson is an accomplished scientist in numerous disciplines, including biology, chemistry, and engineering. He is highly intelligent, capable of quickly coming to terms with alien technologies, and is especially talented at drawing accurate conclusions from quick observations, whether scientific or otherwise.

It is for this ability, as a “science detective”, that S.H.I.E.L.D. sometimes calls him in for specific operations.

He has also spent time in the Amy, and is an accomplished combatant, experienced in using firearms.

One of his main achievements is his wing harness, a lightweight set of mechanical wings which allow him to fly, and which have a sharp edge which may be used as a weapon. They also have an onboard computer, to which the wearer has a neural interface. The harness and wings have self-repair systems, which allow them to recover from all but the most serious of damage.

After serving in the Army, where he first came into contact with Nick Fury, he left to do scientific research. He kept connections with Fury and S.H.I.E.L.D.. Wilson was on their payroll, but allowed to do his research independently. If his research discovers anything useful to them, he passed it along.

While travelling along the Amazon he was contacted by Fury, and called in to help on an assignment. Wilson accompanied Fury, Captain America and the Black Widow to a secret complex in the Tunguska area of Russia, which had been detected as the source of broadcasts that had engulfed the world in nightmares.

They discover an abandoned scientific research site that the Russians had built, using technology recovered from a spacecraft which crashed a century before, to augment humans. The monstrosities that survived were locked within the complex, and had all, by this point gone insane.

While fighting their way through them, they meet a group of X-Men (Wolverine, Colossus and Marvel Girl). The two groups come into conflict. When Colossus grabs Wilson and threatens to squeeze unless he surrenders, Sam realizes Colossus wouldn’t be able to see if his eyes were transformed into metal.

After poking them with his thumbs to test his theory, pulls his gun and holds it to Colossus’ eye, threatening to shoot unless Colossus surrenders. Colossus gives in.

When they reach the source of the broadcasts they discover a mechanical being, the Vision, which had been in the craft that crashed. The Russians had been cannibalizing his body for the technology they had been using. It was only when the military abandoned the complex that he had time enough to recover enough to send out a signal.

The Vision had come to Earth to warn of the approach of Gah Lak Tus, who had been a hundred years behind him, and would now soon arrive.

S.H.I.E.L.D. recovered the Vision from the site, and Wilson was assigned to work with it. He learned what he could about it and the approaching threat.

Sam continued to work with the Vision at the Triskelion, and this project increased to include Captain Marvel and Reed Richards, as Gah Lak Tus continued its approach to Earth. Sam then partnered with Captain America in investigating a silver skinned being in the middle of Manhattan, which turned out to be a herald of Gah Lak Tus.

The work on the project intensified as Gah Lak Tus was detected entering the system. As it entered Earth orbit Sam joined the defence of the Triskelion against the clone assassins of the Enclave. These were defeated, with the help of the X-Men, and Gah Lak Tus was driven away from Earth.

Falcon continues to work for S.H.I.E.L.D., and acts as partner to Captain America.

While not as battle-hardened as Fury and Cap, Sam is experienced operating in combat. While he is a loyal soldier, he does question his orders, and is not entirely comfortable with the secrecy used by S.H.I.E.L.D.. Although he regularly questions Fury, he seems to have a bit of hero-worship of Captain America, despite their growing friendship, and is reluctant to question Steve’s decisions.

“Excuse me, General, but if I’m on a S.H.I.E.L.D. Hellicruiser for a black ops mission into the middle of Russia, I think I’m cleared for whatever I damn well please.” (pause) “Sir.”

Falcon: “What interests me is that these take the form of messages from the dead. It’s kind of why I was in the Amazon. Down there are people called ayhuasqueros. Tribal doctors, mystics, medicine men. They take this stuff called ayahuasca, this awful muck they brew up out of vines and stuff. It’s a psychedelic. They hallucinate all over the place – but it’s their belief that the visions are actually another dimension. When you ask them why they take it, they say it’s for working with their ancestors. They’re necronauts. They travel in the place of the dead. And what they bring back are messages from the afterlife. That’s what these messages could be, you know. The dead have made real-time contact with the living through prime-time TV. There’s a headline for you.”
Black Widow: “The dead appear on American TV all the time. I’ve seen game shows.”

Captain America: “They told me you were a scientist-type, Mr. Wilson. What were you doing down in the jungle with the loincloth brigade ?”
Falcon: “Um. Do I call you Captain ?”
Captain America: “Cap is fine.”
Falcon: “Cap, you’re a machine. I’m a machine. Our parts are made out of water and meat and minerals, but we’re walking pieces of engineering. Everything’s a machine. Plants, everything. When we eat a plant, we disassemble it, junk what we don’t want and plug the parts we need into our machine. What if these jungle drugs are machines we can ride ? I’m on a S.H.I.E.L.D. retainer. If I come up with anything good, S.H.I.E.L.D. gets a shot at it. I’ve seen dead soldiers, Cap. What if I could make a machine that brought them back ?”
Nick Fury: “…Damn.”
Captain America: “Call me Steve.”

Before his tour in the US Army, Sam attended NYU long after the conclusion wide-awake era. The original Starman had stayed on as a teacher after the implosion of the metahuman project (see Ultimate Xavier for details). For Wilson it was a life changing experience.

He learned to question all the answers. Magic, science, machines, and faith all became elements of a puzzle to him. The idea that nothing was unknowable, only unknown, sent him in many fascinating directions of study. During Sam’s tour in the Army he gained the moniker of Science Detective because of the ways he could make facts fit together.

It is thought that it was a combination of secrets learned from Starman and his stunning puzzle solving mind that led to the development of his wings. Wayne-tech offered a fortune for the designs but Sam instead made a deal with Fury and Steel. He would share with SHIELD any interesting developments of his research, and they would fund his junkets.

At one point in the late 90’s Sam went to the rescue of his old friend. Starman, despite his powers, his grown quite old.

When he had been targeted by the children of his old WWII era foes, Sam used his Wings, brains, and a .50 cal Barrett sniper rifle to save his old mentor. It was during this point he came into contact with Hawkman and Batman.

Sam left veiled comments that he knew Batman’s identity by psychological reverse engineering of Batman’s methods and technology. This did not make the Dark Knight happy.

After a short stint with the Ultimates during the Gah Lak Tus episode Sam, like Captain America had grown uncomfortable with the methods and goals of SHIELD. Unlike the Captain however Batman would not trust him in the counter-cabal.

Starman, in his last meeting with Sam introduced him to the ever-suspicious Charles Xavier, Sam learned something in that meeting with Xavier that turned him away from his old friends at the army and in SHIELD. Falcon at last report was investigating Starman’s death, and his Rod had disappeared. 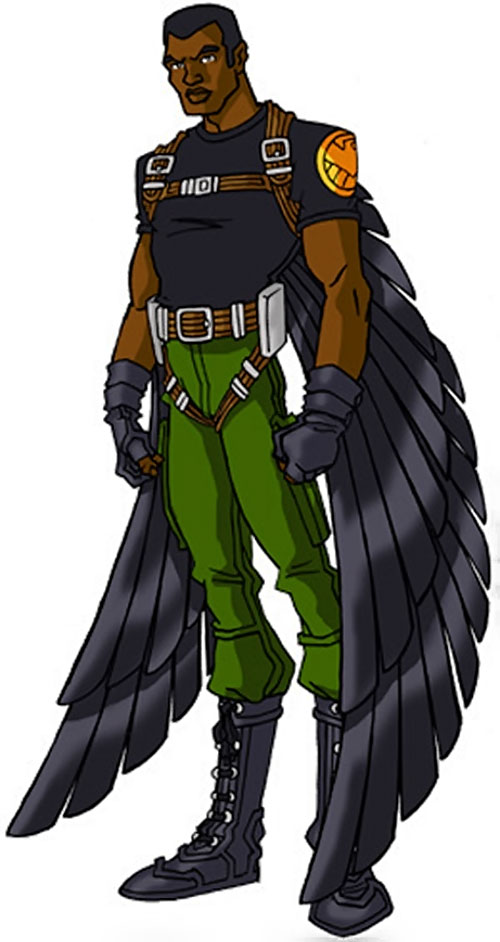 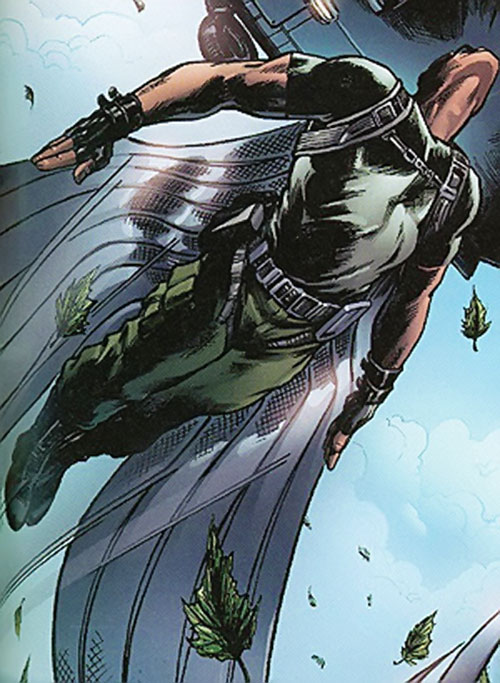 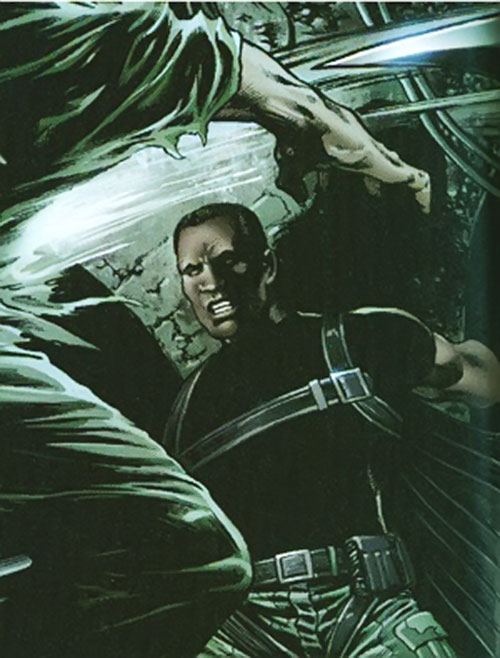 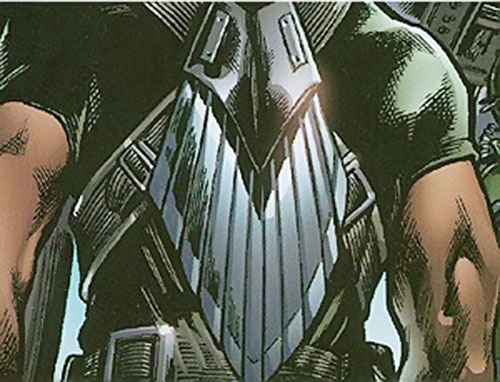