K-9 is a character in the classic 1998 video game Fallout 2. If you’re not familiar with it, we suggest that you first read our sample Vault Dweller character profiles, which also explain the setting.

K-9 has but the barest development, but subsequent games have more information about cyberdogs. He also plays a significant role in our example FO2 playthrough, featuring our sample Chosen One.

This profile may be revised once I’ve played the later Fallout games featuring cyberdogs.

The illustration comes from this mod by Ma-1025 , with some quick edits.

A cyberdog is a selected (and often specially bred) large dog that has been extensively rebuilt using cybernetic and robotic parts. They are usually built for a variety of police and security roles, though some models work as frontline auxiliaries for the military.

K-9 is reportedly a personal security aide. And his sprite has a visible red cybernetic sensor à la Deathlok. 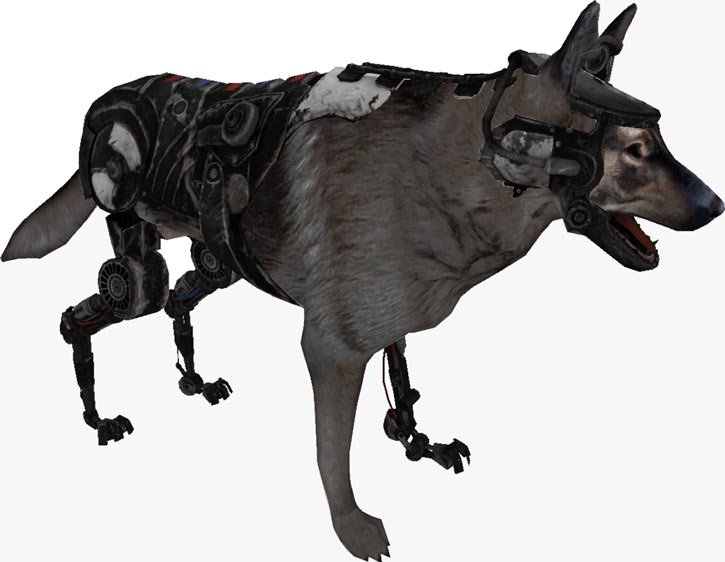 Our game stats therefore assume thermal imaging and an ability to scan for metal and explosives.

They also highball K-9’s persuasiveness, which is based on the take on the character that appears in our sample playthrough.

K-9 is combat trained, but his default combat behaviour in Fallout makes him passive when paired with a ranged combat character. Since K-9 normally enters the game very late, he likely realises he has very little to contribute given how heavily armed and armoured the opposition is at that point.

K-9 is the product of a special project by Dr. Schreber, of the Enclave. The Enclave is a descendant of the Federal government of the US, attempting to recreate the United States of America out of the wasteland. They employ murderous, totalitarian, militaristic means.

Schreber appears to be a specialist in uplifting . He played an important role in turning a cadre of deathclaws into sapient, talking shock troops for the Enclave.

It is unclear how much of the cyberdog technology is Schreber’s, but he may have created or recreated the core of it. This technology spread beyond the Enclave when Schreber’s colleague, Dr. Henry, defected to the New California Republic.

One remark from Schreber gives the impression that K-9 used to be his pet dog, and was the first cyberdog uplift. Later Fallout games have cyberdogs date from before the world’s end, so it likely was just a self-aggrandizing turn of phrase on Schreber’s part.

K-9 is an example of Enclave uplifting tech conferring both higher intelligence than planned, and ethical standards that are higher and firmer than most humans’. The same thing happened with the uplifted deathclaws.

As a result, after becoming a cyberdog K-9 could understand the research that Schreber was conducting. He also could understand that his master was a sadistic son of a bitch (so to speak) who routinely tortured his subjects. A disagreement escalated to K-9 biting Schreber, who disabled the dog’s robotic limbs (presumably through a remote failsafe).

Doctor Schreber kept the immobile K-9 alive in his lab, where the dog had no choice but to watch his former master’s horrible experiments.

In the canon Fallout 2 events, K-9 is taken away from the Enclave by the Chosen One. However, he and another cyberdog built by Dr. Henry are later on taken apart by the New California Republic to analyse the technology.

In our sample Fallout 2 playthrough, the Chosen One kills Schreber and adopts K-9 as her pet, sidekick and conscience. K-9 and his mistress eventually drive away in the sunset and are never seen again.

Most cyberdogs seem to be German Shepherds. The sprite for K-9 is too small to tell the breed, however.

His fur seems to be a dull, dark grey. This would be unusual for a German Shepherd, but apparently not unheard of.

K-9 has but a handful of lines, and these mostly seem to address “stupid” versions of the Chosen One (the gameplay changes when the Player Character’s  Intelligence is below, IIRC, 4). One gets the impression that there was some characterisation envisioned but it was never added to the game-as-it-shipped.

From these few lines K-9 seems highly intelligent and rather sarcastic. He also seems to have a strong inborn sense of ethics. Since he’s similar to the deathclaw uplifts he might prefer using an ample and precise vocabulary.

This aspect was developed in our sample Chosen One profiles.

K-9 seems to also have a strong need to belong to a master. Perhaps it was programmed in by Dr. Schreber as an early response to K-9’s ethical concerns.

“One; I am a dog. Two; I am communicating with you vocally using the common English language. Therefore it is safe to assume that I am a talking dog. Now, do you intend to answer the question that I posed to you a moment ago ?”

Bonuses and Limitations:
All Powers above are Form Function.

Connections:
The Chosen One (Low).

Drawbacks:
Creepy Appearance, SIA toward finding itself a master, Misc.: K-9 is a dog, Misc.: body mass is 1 AP.

Writeup completed on the 8th of February, 2017. 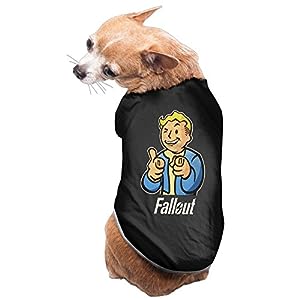 Fallout dog clothes (not an hoax, not a dream, not an imaginary story).