“Raider” is a generic name in the Capital Wastelands for those more-or-less human savages who derive most of their living from preying on others.

Raiders live in squalor and callousness, tend to be radiation-damaged and slightly mutated and most of them heavily abuse chemicals such as jet, psycho, alcohol, cocaine, etc. They take whatever they want, torture and murder are their idea of fun, and it’s not unusual for them to be brain-damaged.

As can be expected their lives are nasty, brutish and short, and death can easily came from another raider in a fit of rage or substance abuse. 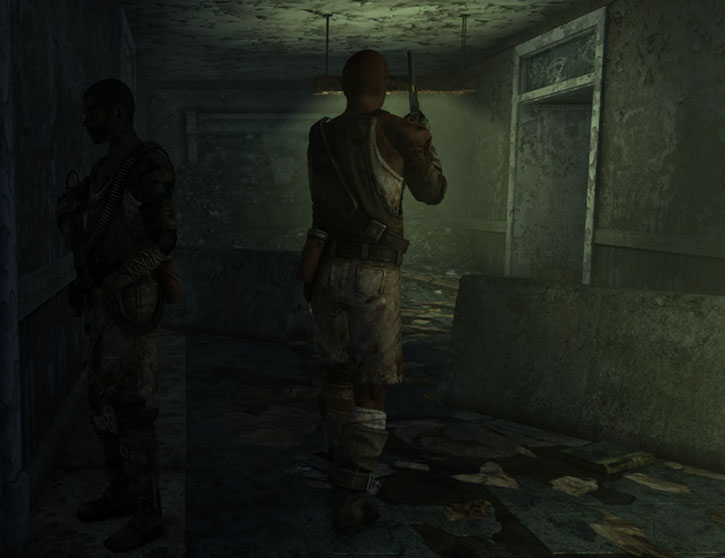 Raiders patrolling the ruins of the Springvale Elementary School.

Dismembered, mutilated human corpses are usually hoisted around a raider encampment using chains, hook, ropes, etc. This may be meant as intimidation, but in practice it chiefly serves to warn onlookers that they are approaching raider turf.

From observing raider dwellings, one gets the impression that most raiders are cannibals and eat their victims – the corpses may simply be kept around as meat. Cannibals are not a rare thing in the Wastelands.

Some raiders have an unusual skin colour, and many raiders have something unusual about their eyes – often a reddish eyeball colour. Their armour is chiefly leather with scavenged bits of metal and plastic as reinforcement, and many wear scary helmets and masks such as welding masks or executioner-like cowls.

Their hygiene is terrible, and they favour punk-ish hairstyles. The aesthetics Fallout raiders are generally derived from the gangs in Mad Max movies. 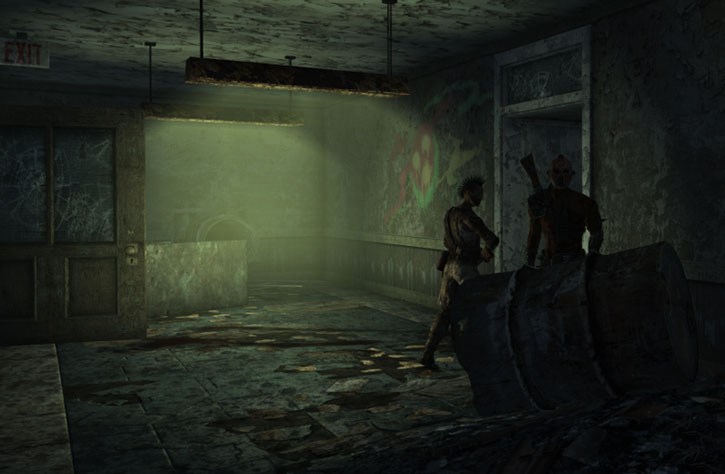 Raiders patrolling the ruins of the Springvale Elementary School.

Raiders can take a surprising amount of damage, especially if attacks hit the best-armoured parts of their attire. A lot of this resilience is presumably the result of being under the effect of combat drugs when encountered – this is already factored into our game stats.

A raider charging you with a tyre iron may not seem too dangerous if you have a gun, but one medium- or small-calibre bullet probably isn’t going to stop them and they have friends. Well, allies. And you probably haven’t got a lot of bullets.

Raiders who can conquer and fortify a robust building tend to be the strongest communities, especially if the building gives them access to some resources even after the scavenging is done. Such a “settled” community might have 12-15 individuals or more.

Unusually strong communities, like in Bethesda or Fairfax, can control a few small blocks of still-standing ruins, which they will fortify and patrol. In the Capital Wasteland, the largest raider stronghold is the Evergreen Mills factory, with more raiders living in the caves underneath. 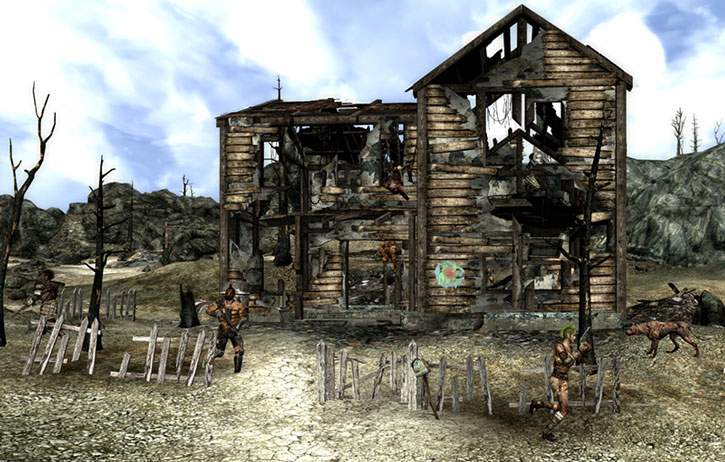 Kaelyn’s Bed & Breakfast near Arefu, now the HQ of a raider gang.

In contrast, small communities with just a few raiders might live in the middle of nowhere with a “hideout” that is a literal hole in the ground with random sheets of corrugated iron and pieces of wood and metal to turn that into a mediocre shelter.

Most raiders seem to share a symbol — a spray-painted yellow, red and green tag on the walls of their building(s) — and it doesn’t seem that they habitually attack other raider turf. They also speak fluent English, and some of them can somehow read and write.

This may mean that the Capital Wasteland raiders share an origin, much like the Khan raiders and others in California originally come from Vault 15. 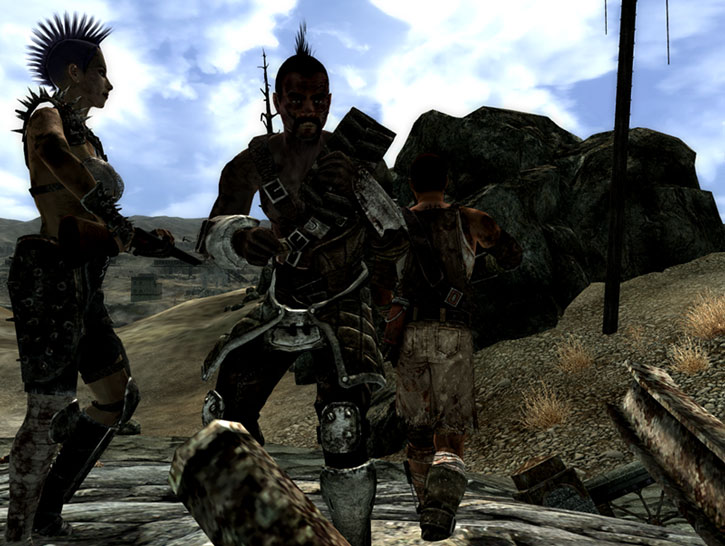 Raiders react very aggressively to any intrusion on their turf, charging and firing recklessly – one gets the impression that part of the loot and food rights is on a first come, first served basis.

If they outnumber and outmuscle the opposition they are not concerned about tactics or ammunition conservation, with melee fighters rushing in while those with guns open up. Presumably the expect outmatched victims to run rather than open fire.

Raiders do not seem to be generally capable of sophisticated reasoning or long-term planning, but this is seems more due to impulsiveness and lack of long-term perspective than a genuine lack of intelligence. 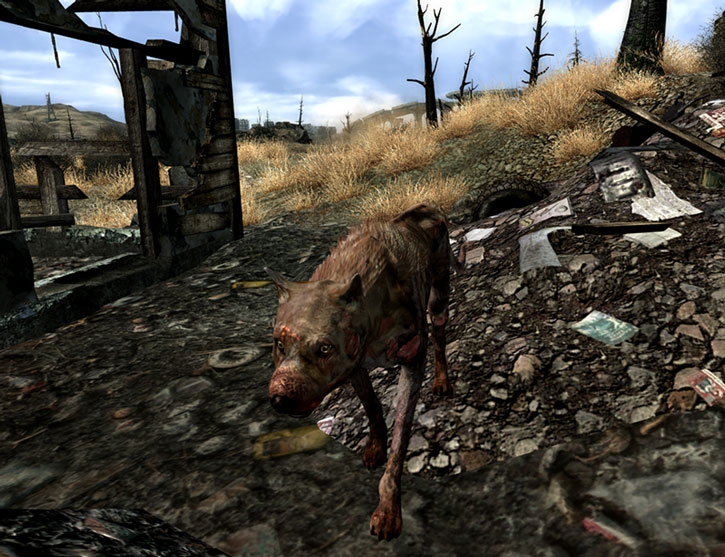 Some raider communities have a member whom the others call a pit dog. These are always men, wearing a robust metal armour and wielding a large sword. Though the weapon and armour are made of welded scrap metal, the general design is always the same and these men seem to all have the same general training in swordsmanship.

Pit dogs clearly share a common origin, and their name evokes some sort of gladiatorial melee deathmatch circuit, which would explain the standardised armour, weapon and training. Though they eschew firearms, pit dogs are quite dangerous as their armour will usually defeat small-calibre gunfire.

The two most likely first encounters with entrenched raiders for the Lone Wanderer are in the ruins of the Springvale elementary school, and the ruins of a Super-Duper Mart west of Megaton, close to the Potomac. 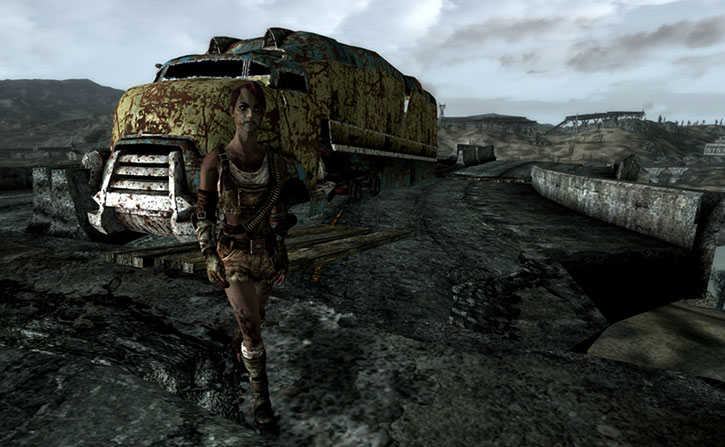 The Springvale elementary settlement is dangerously close to Megaton, but attempts at raiding the fortified village were bloody failures.

The raiders then attempted to dig their way into Vault 101, but their use of explosives angered a colony of giant ants who invaded their tunnels and forced them back to the basement of school, which they could defend against the ants. Without these setbacks and the death of their leader, they would presumably control the whole of the Springvale ruins.

The raiders at the Super-Duper Mart use the small supermarket as a base, though the shelves have been practically empty for centuries. The key asset is the pharmacy room, whose stout walls and locked steel door are completely intact. They use this strong room to store their loot, and have set planks atop the supermarket shelves to patrol within their building. 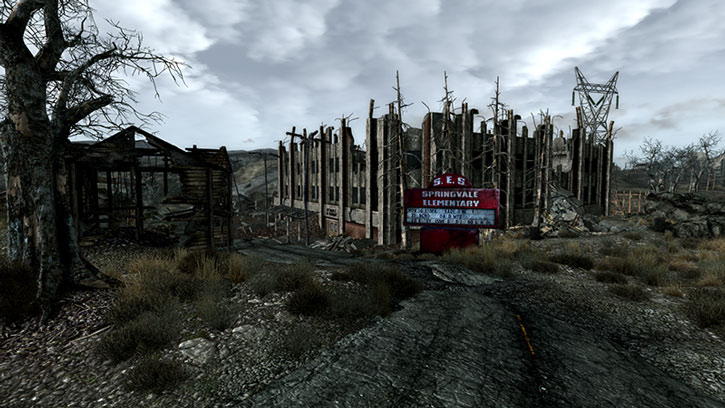 A view of Springvale Elementary. Click for a larger version.

Bonuses and Limitations:
Sealed Systems only vs. radiation.

Equipment:
Typically one or two among the following :

Bonuses and Limitations:
Sealed Systems only vs. radiation. 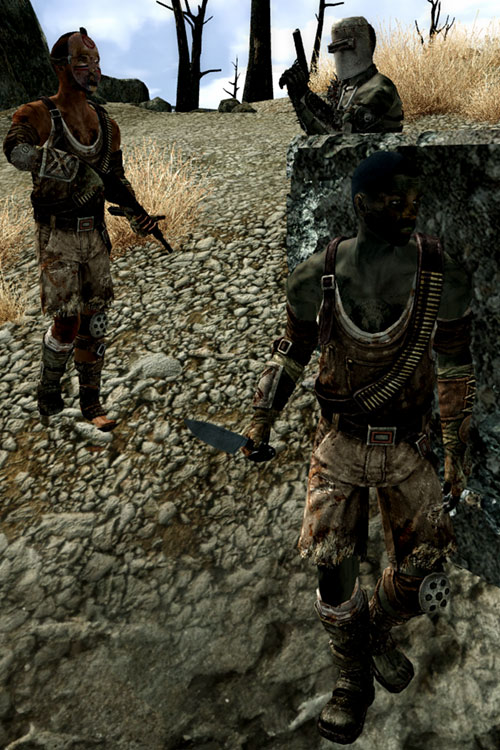 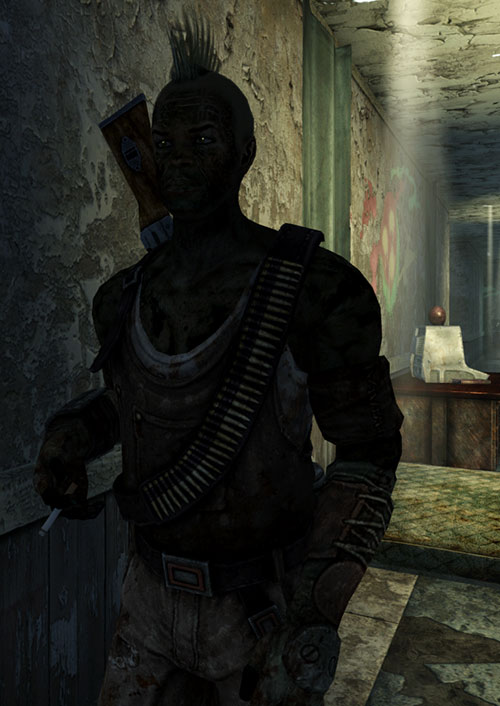 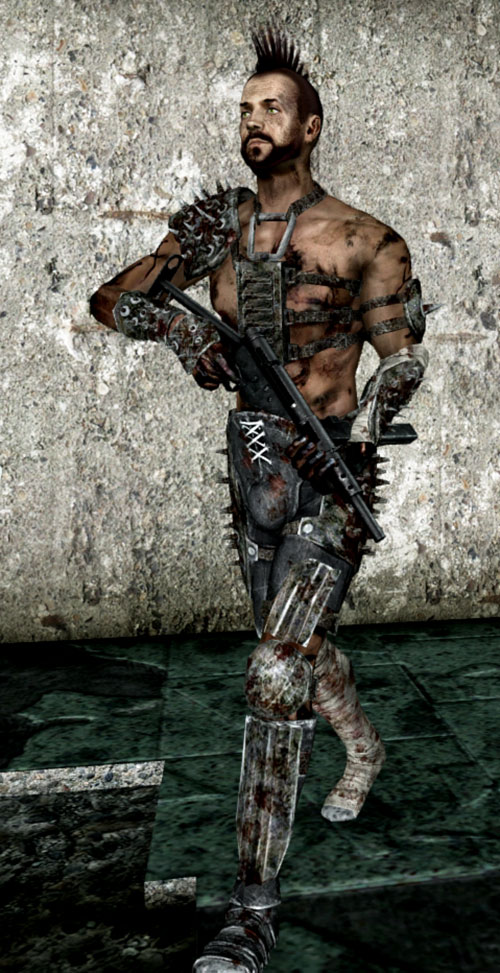 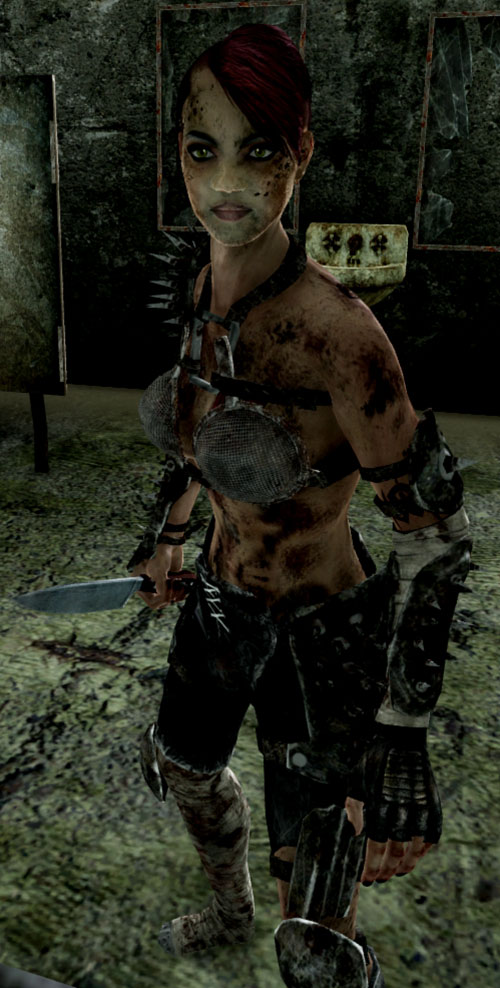 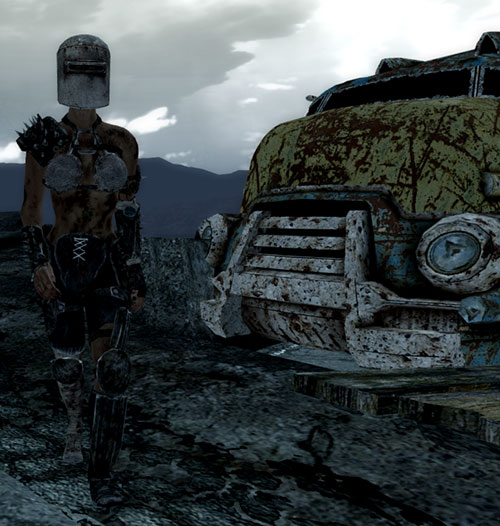 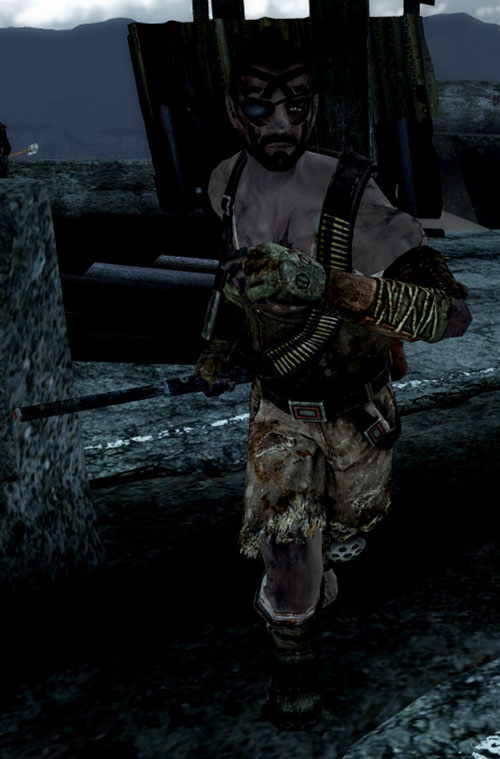 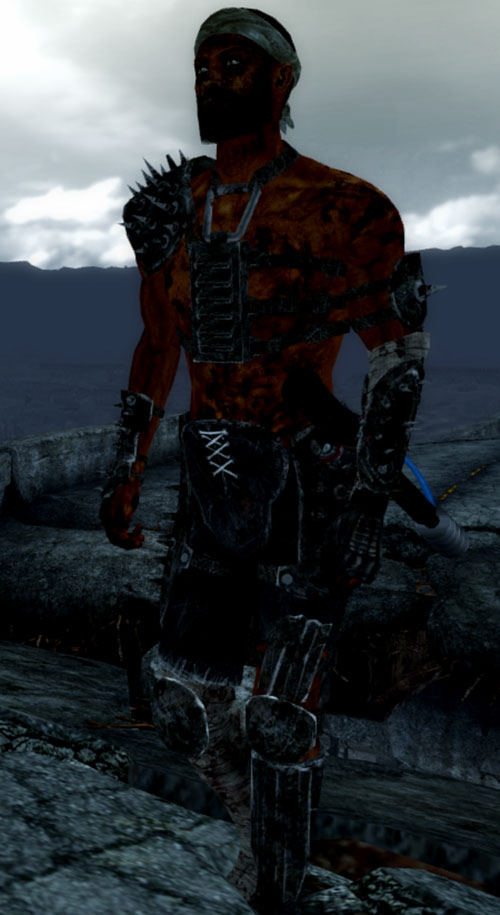 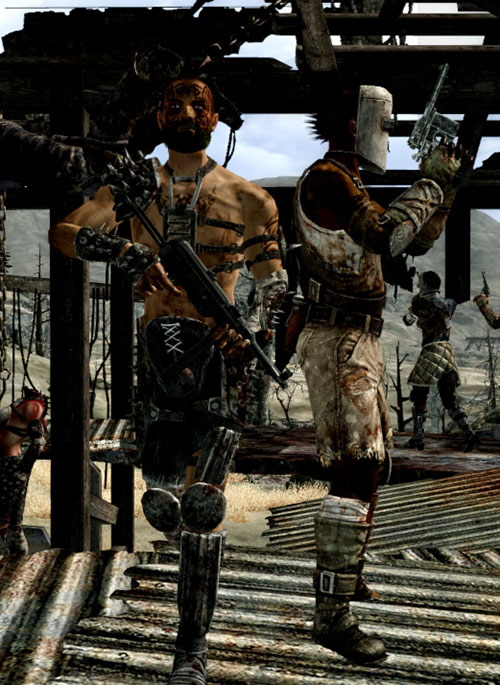 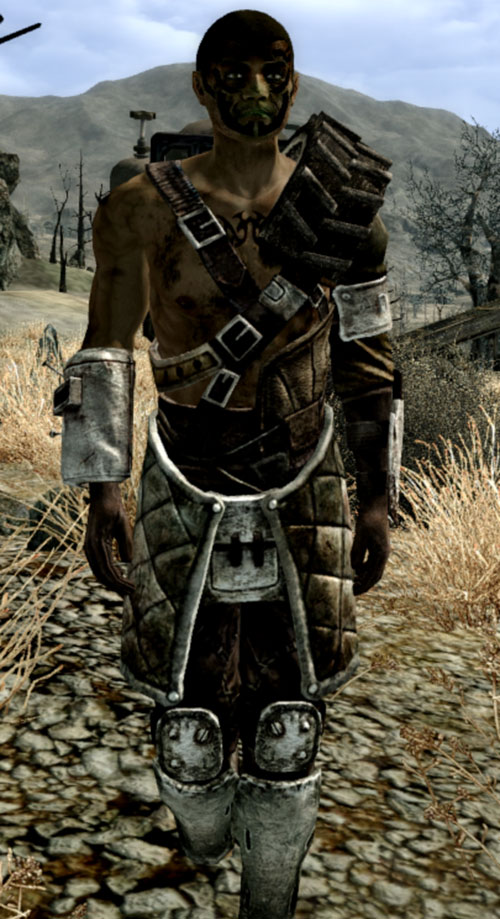 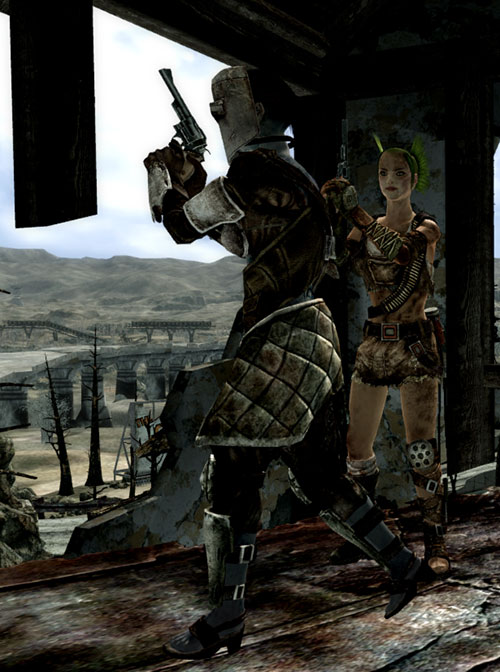 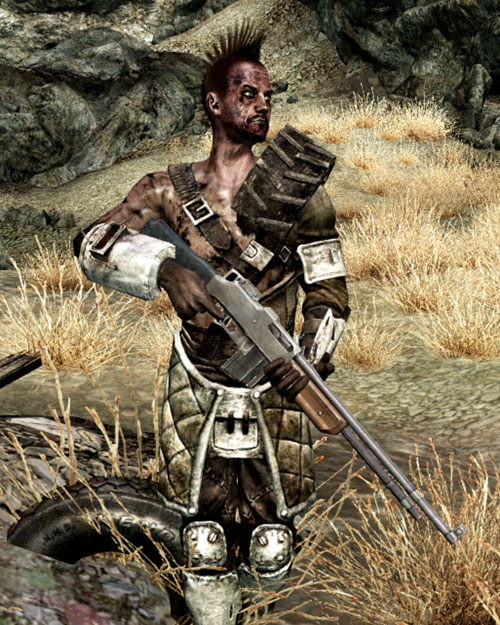 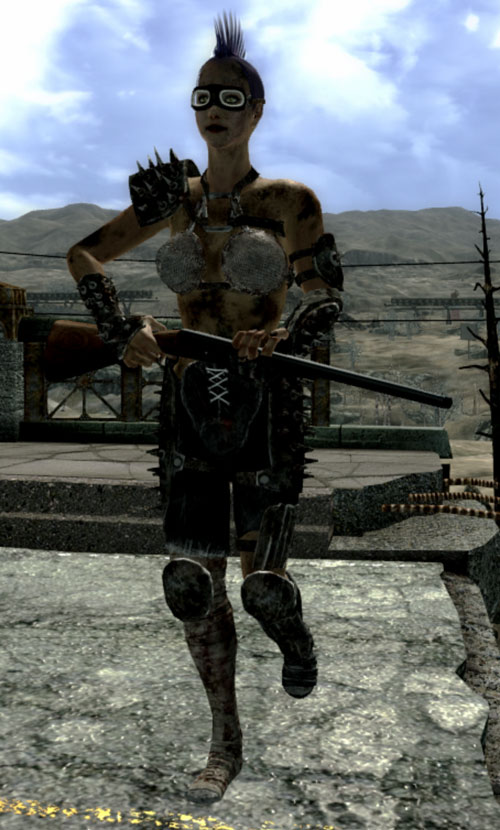 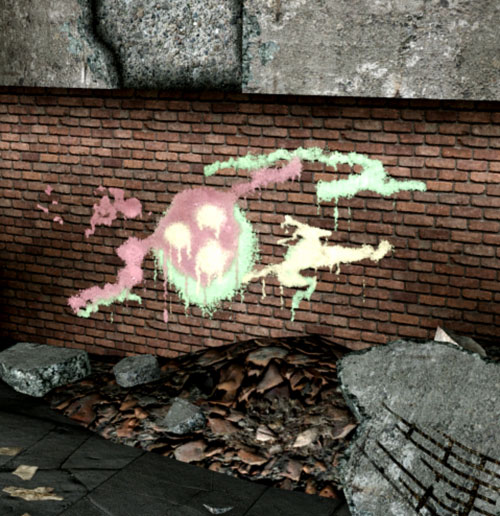 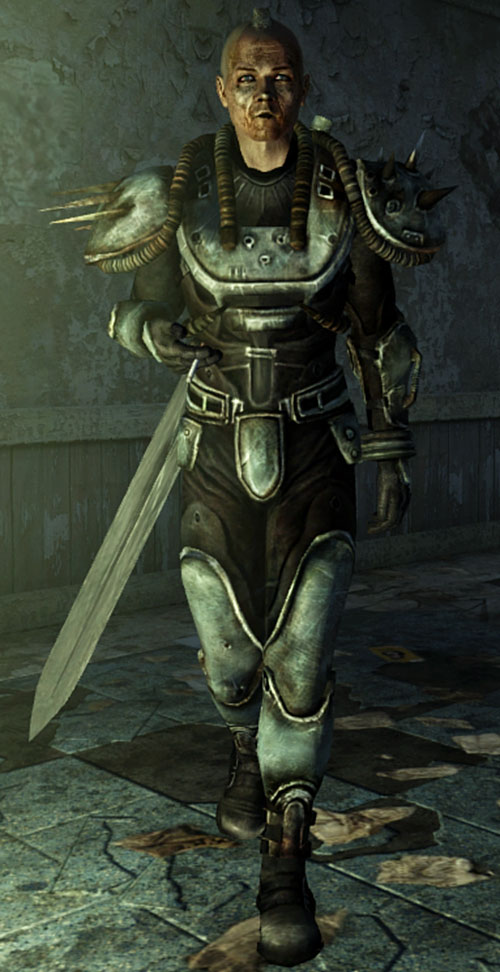