These nightmarish creatures are large and remarkably robust. They’re not bulletproof by any mean, but they can take significant gunfire.

They have been known to detect opponents from a surprisingly long way away. Our game stats assume a sharp sense of smell, and thus posit that discrepancies in detection range are caused by the wind. But this is hypothetical.

Centaurs do not appear to be able to communicate. Their intelligence level is indeterminable in the field.

Centaurs can spit disgusting, radioactive projectiles over an arc. These can cover dozens of metres. These missiles like a small-calibre bullet (plus the radioactivity buildup). But while accurate they are slow and easy to dodge if one is paying attention. 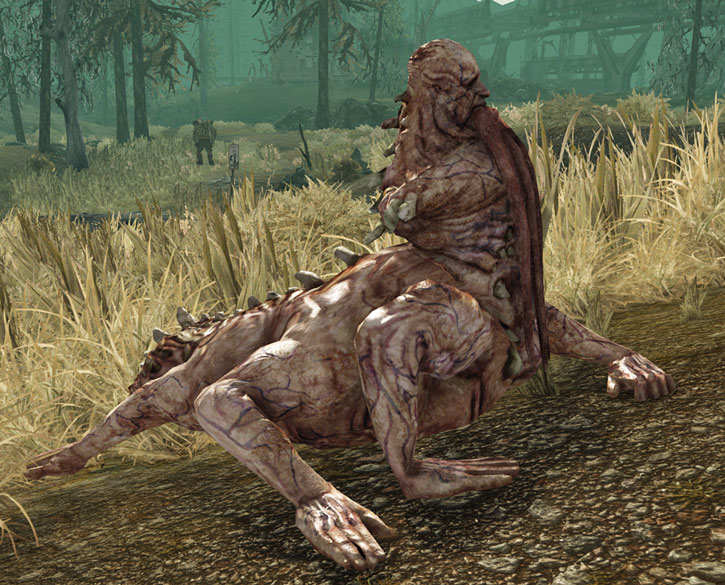 They can also lash out at close range with their tongue.

In themselves centaurs aren’t much of a problem for highly-trained, armoured, well-armed veteran infantry with lots of ammunition. But precious few people in the Wasteland match this description. And centaurs seldom come alone.

Centaurs are abominations produced by a variant on the FEV treatment used to create super-mutants.

These chimeras have a human torso and head, and their “legs” are actually human arms, but they have various animalistic parts – hence their name. They are not quite as monstrous as the centaurs once created by the Master in California, but it’s still pretty bad. 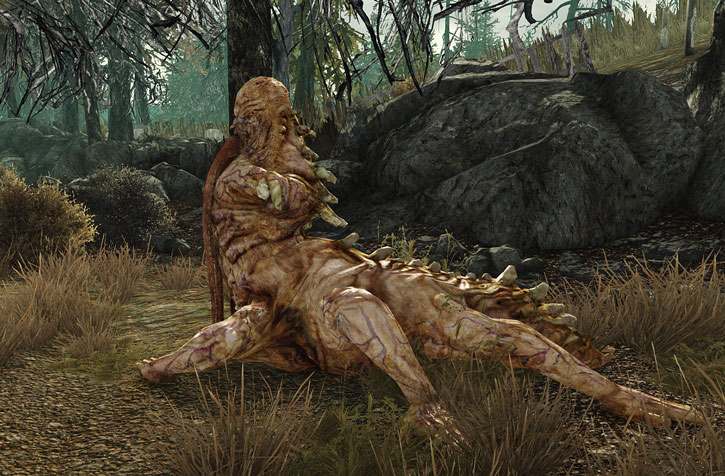 How centaurs came to be and whether their creation was deliberate is unrevealed. One does not quite see why centaurs would be created instead of super-mutants.

If centaurs do have useful senses, they might be a close equivalent of K9, only monstrous and much tougher.

Bonuses and Limitations:
Accuracy isn’t usable against a moving target (-2).

My original estimates for the durability of centaurs were pretty high. But extracting numbers from the GECK (Fallout’s built-in editor) doesn’t support this. These game stats have been aligned with GECK numbers.

Perhaps the hit box of centaurs is odd, leading to shots that seem to connect but actually go wide as far as the engine is concerned. Or perhaps I just suck at shooting centaurs.

The game stats represent a heavily-modded version of Fallout 3.