Mirelurk are as large and significantly heavier than an average human person, and have a robust shell. Their nasty crab-like pincers can easily kill, and they are fully adapted to the heavily radioactive water of the Capital Wasteland.

Though armoured, mirelurk aren’t bulletproof. A 5 or 6 rounds center-of-mass burst from a 5.56mm assault rifle will normally kill them. However typical Wastelanders (in DC Heroes terms, with AV/EVs circa 03 or 04 and no Hero Points) will find them very dangerous.

(See our deathclaws profile for more about these computations, and note as always that it reflects a modified version of Fallout .)

The face of a mirelurk isn’t armoured. In game terms this weakness is handled normally via Critical Attacks or high attack rolls. 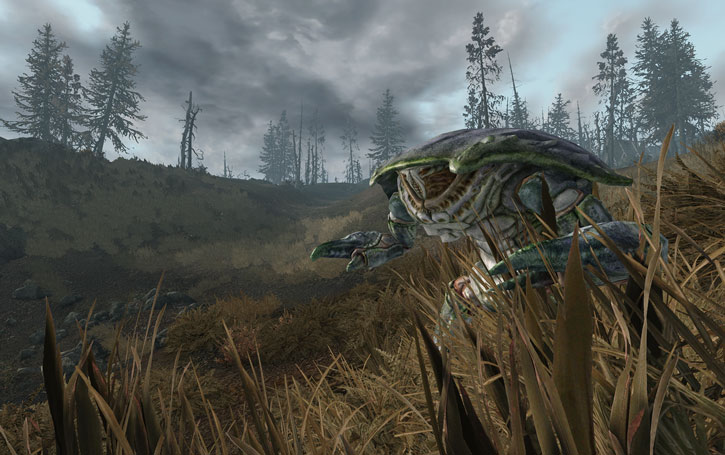 Mirelurks normally live underwater, and are prone to suddenly surfacing to rush nearby intruders. This can easily blindside the non-paranoid.

A mirelurk will usually perform the equivalent of a shoulder rush (ramming with the top of its shell, above its face), hoping to knock their opponent down then shred them with their pincers.

Moira Brown in Megaton  thought that mirelurks might be intelligent and have a society, but she’s the Capital Wasteland’s leading space cadet. There are no actual signs that mirelurks aren’t simply social crustaceans.

Some mirelurks have been called “hunters”. They are larger, stronger, and have two extra pairs of pincers (albeit these pincers and arms are much smaller).

Since they also have brighter coloration it is possible that “hunters” are simply male mirelurks, though it may also be a different mutation. 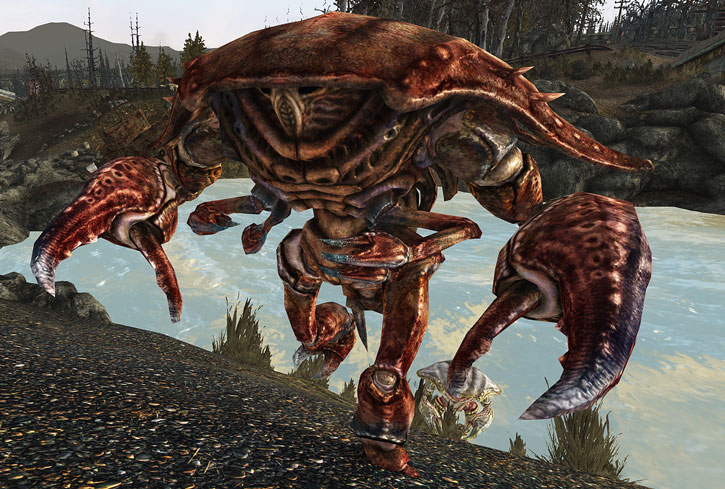 Hunters seem to have a wider territory they’ll defend. There are reports of hunters leading small “raids” of mirelurks to get food (for instance by attacking a cattle herd).

There have been reports of even larger hunters with a darker coloration, who can breathe fire. Though these “firelurks” sound like a tall tale, autopsies do show that “firelurks” secrete a highly flammable saliva they can spark alight and spit several metres away.

Mirelurk are heavily mutated animals. They have an humanoid shape and a distinctly crustacean appearance. Like other Fallout “monsters”, they are the product of 1950s Atomic Horror-style mutation, and possibly the Forced Evolution Virus.

Analysis show them to be thoroughly altered horseshoe crabs , and their proposed scientific name is Scylla serrata horridus. 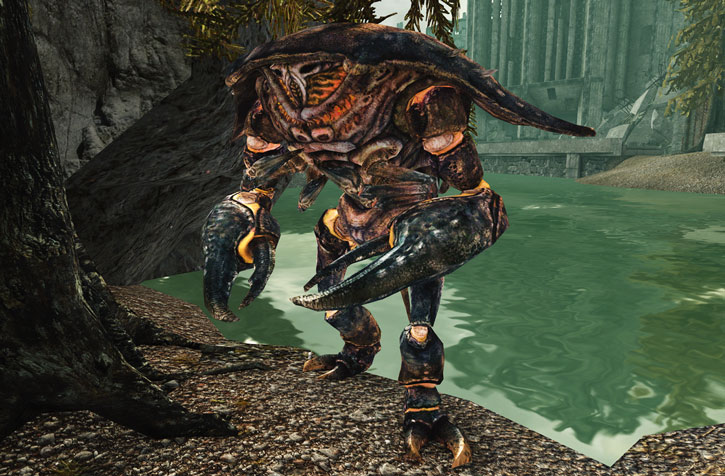 Mirelurk chiefly live in the Potomac river and other watery areas. Some have settled in partially flooded underground ruins. They seem mostly concerned with feeding, reproducing and protecting their egg clutches. But they are also highly territorial, and quite dangerous to people who aren’t heavily-armed professionals.

Some ’lurks live in the ruins of a plant in Virginia that once produced America’s #1 Soft Drink, Nuka-Cola . Unlike other mirelurks, they have a blueish colour caused by the Nuka-Cola ingredients mixed with the radioactive water in the plant.

Their meat is also reminiscent — in taste and properties — of Nuka-Cola, the All-American Beverage.

Mirelurk meat is often considered one of the top foods in the Capital Wasteland, and by the modest local standards is a major industry.

During the 2270s, a group of Wastelanders in the Western ruins of Washington D.C. herded a cast of mirelurks underneath the Anchorage War Memorial to farm them there. How they did this is unrevealed, but presumably mirelurks can be frightened off in some way, perhaps by using fire or extremely loud sounds. 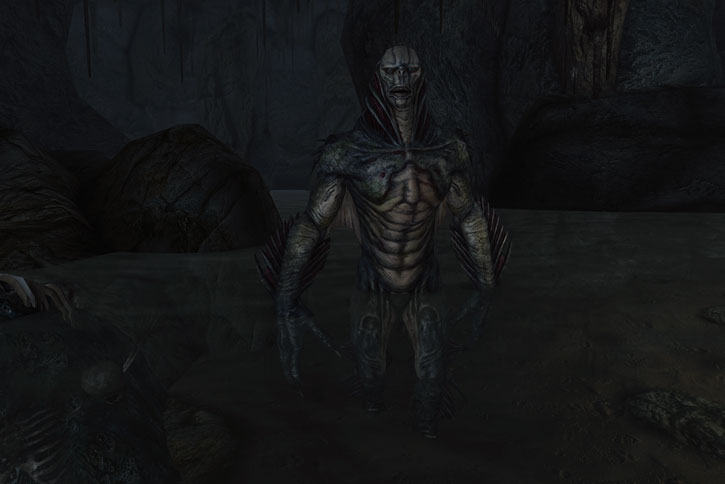 A mirelurk “King” (not yet covered in this article).

The War Memorial has partially flooded, very dark and humid sections that hold the mirelurks. The “farmers” likely threw them food and let them live and reproduce, coming in from time to time to get almost-mature eggs and meat. Their signature mirelurk meat cakes sold very well.

This came to an end when mercenaries paid by rival mirelurk meat merchants raided the place. They accidentally freed the mirelurks, who killed everyone in the complex underneath the Memorial.

Most mirelurks tend to be coloured in off-white, dull grey-blue and/or grey-green tones. Hunters are often red, like a crab, but other colours are possible.

”Firelurks” tend to be black and burnt orange.

Bonuses and Limitations:
Sealed Systems only protects against radiation.

Treat these as Hunters, except that they have Damage Capacity: 03, Accuracy (Flame Project): 05 and Flame Project: 04, albeit Flame Project is Double Diminishing.

The game stats represent a heavily-modded  version of Fallout 3.