Protectrons are clunky humanoid robots, perhaps 5’6” in height. They are slow and ungainly, but seem about as strong as most men.

They are equipped with light lasers (one in each hand and reportedly one in the head). Howbeit they can only use one at once. And their fire is neither particularly powerful nor particularly accurate (though it’s not terrible either).

Protectrons were never meant to be combat monsters. They are more akin to mechanical security guards and patrolmen.

Many have survived the Wasteland on their own for centuries. They don’t look or smell edible, and attacking them isn’t normally worth it. Unless one knows how to extract their batteries before they burn out, and even then this is modest loot. Furthermore, one assumes that their laser fire scares away most animals.

Protectrons are tactically inept. They just walk slowly toward the hostiles, never deliberately taking cover. And they open fire from too far away to have a decent chance to hit.

Protectrons have artificial intelligence, plus either a voice synthesizer or (more likely) a repertoire of pre-recorded phrases. Their speech is context-appropriate but comes in a synthetic monotone. And they can only follow simple, rigid procedures.

These robots have some sort of wireless communication capability, much like wifi. They use it to query nearby servers feeding them with information – and to report. But very few hotspots remain.

They can also be equipped with small ordinary equipment for their mission. Typical examples would be a scanner to remotely read employee badges, or a device to inspect metro tickets.

When not active, protectrons can be stored within a maintenance pod.

The US National Archives  employed protectrons as tour guides. They programmed their robots to emulate the personalities of famous historical figures.

By the 2270s, one such protectron’s programming had so degraded that it believed itself to be the person it was imitating, 18th-Century American politician Button Gwinnett . This robot exhibited the mannerisms and behavior to match. 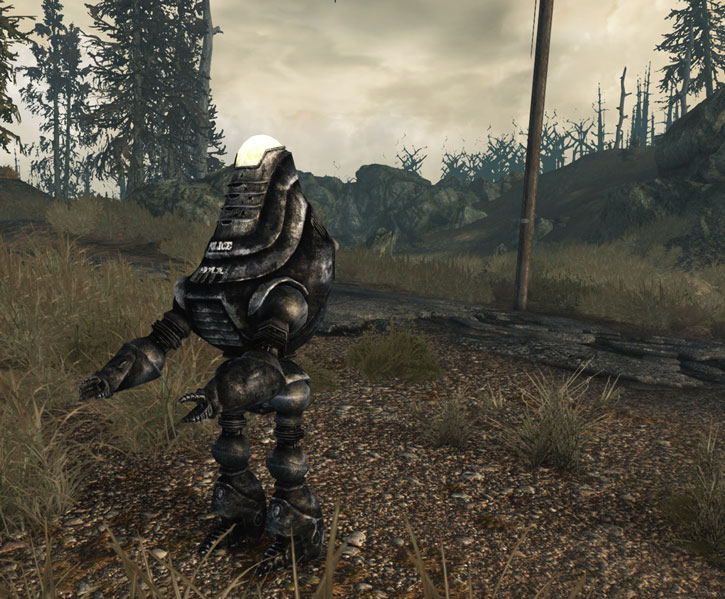 Some tour guide protectrons were programmed with more generic personalities. Examples include Primm Slim  at the Vikki and Vance Casino  in the Mojave Wasteland.

Primm Slim’s normal programming had him speak like a stereotypical western lawman. He also conveyed historical and recreational information regarding the town of Primm. But under certain circumstances additional protocols in Slim’s programming could be triggered to make him assume the actual role of a law enforcement officer.

Likewise, back in the Capital Wasteland, the protectron dubbed “Deputy Weld”  was given a cowboy hat and programmed to speak like a cliché Old West sheriff. But this was a much simpler job that relied on uttering some stock sentences.

Protectrons are a class of robots that seems to be cheap but reliable security patrollers. They were used by the police for routine patrols, but also by various public and private companies.

Though their AI is far from formidable, they can also be programmed to do other repetitive, simple tasks. Therefore, some heavy industry plants bought a protectron workforce. This may have been a consequence of the wartime draft.

Protectron workforces also show up in the Pitt  and numerous Mojave Wasteland locations. This indicates that their use for menial labor was widespread. Protectrons that were employed as labor rather than security still possess the standard weaponry suite. 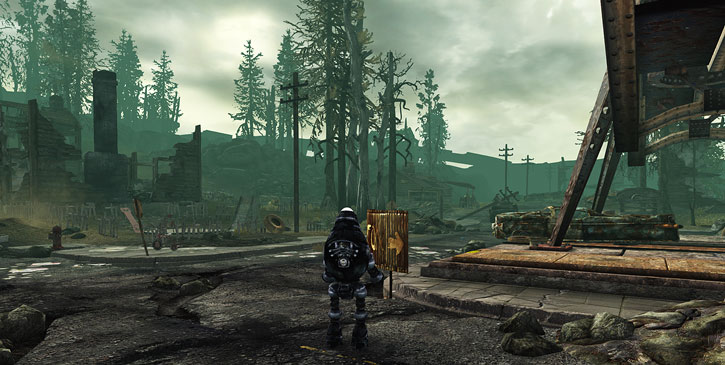 Many protectrons are still up and running more than two centuries after the war. Since Fallout features tiny atomic generators that can provide energy practically forever, one assumes that protectron run on those. This would also explain how they withstood centuries’ worth of radiation – shielding works both ways.

It is thus not rare to see a protectron patrolling the Capital Wasteland and shooting at random small animals. It has no understanding that its patrol route has long since reverted to ruins and wilderness.

In the Capital Wasteland, most protectrons were apparently built by RobCo. This company was the equivalent of IBM at its height.

Protectrons are reminiscent of Robby the Robot . They do clunky mechanical noises when moving. 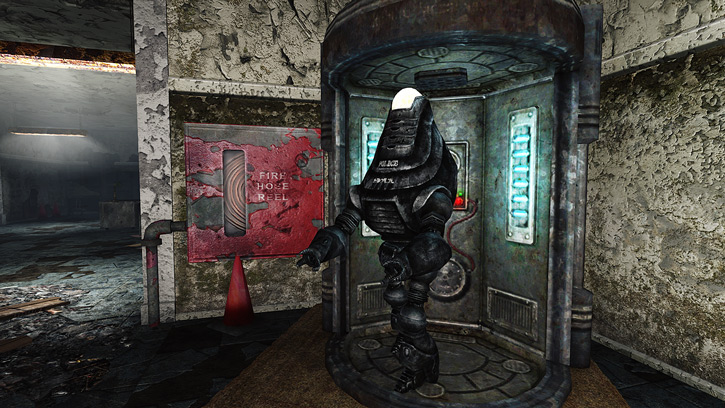 They are usually painted to match the organisation owning them. A common example is a black paint job with a white POLICE 911 inscription on the front, like old police cruisers.

Being old-school robots, protectrons always give status updates and state their intentions out loud.

Protectrons fight to kill. They only seem equipped with lethal weapons. The shoot people with lasers even if the infraction is being in the metro system without having a ticket.

That might be their actual programming. After all, pre-War American society in Fallout was remarkably callous and violent. Or it might be an unintended consequence, such as :

“Do… not… attempt… to… flee. Justice… will… be… administered… fairly… and… swiftly.”

Advantages
Life Support (a protectron’s atomic generator can keep it going for centuries).

Drawbacks:
MPR (Protectrons have no sense of touch, taste or smell), MPR (movement speed is 0 APs).

Tour guide protectrons programmed to emulate personalities will have Artist (Actor): 02 and an Expertise relating to either the general character type or specific person they are mimicking.

The game stats represent a heavily-modded  version of Fallout 3.

Protectrons have numerous complications (can’t run, can’t touch, can’t taste or smell, limited by their programming, mediocre mobility, decayed infrastructure…). But on the other hand they can’t use Hero Points, so…

Tour guide protectrons programmed to emulate personalities will have about 7 Ranks in an Expertise about playing their role. It also provides data about either the specific character they are “playing”, or something related to the archetype they are “playing”. 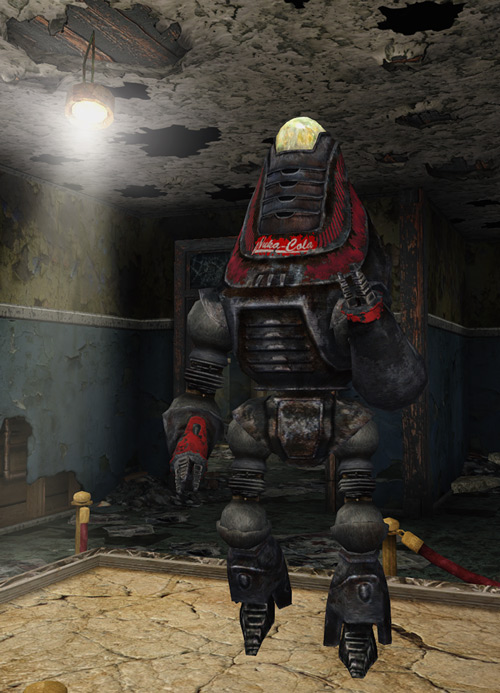 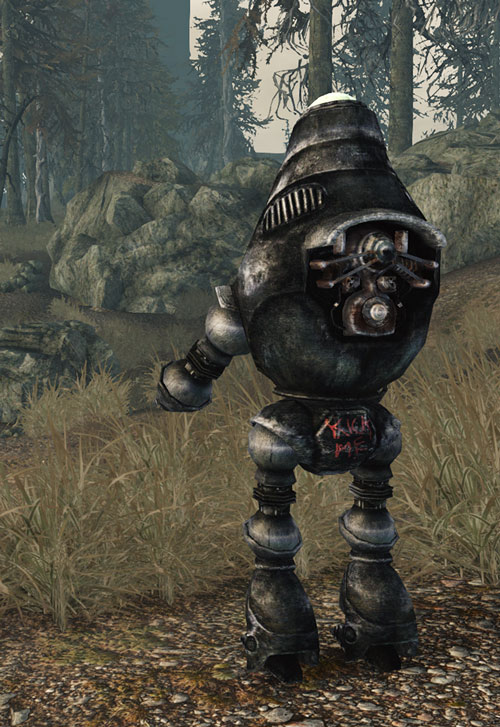 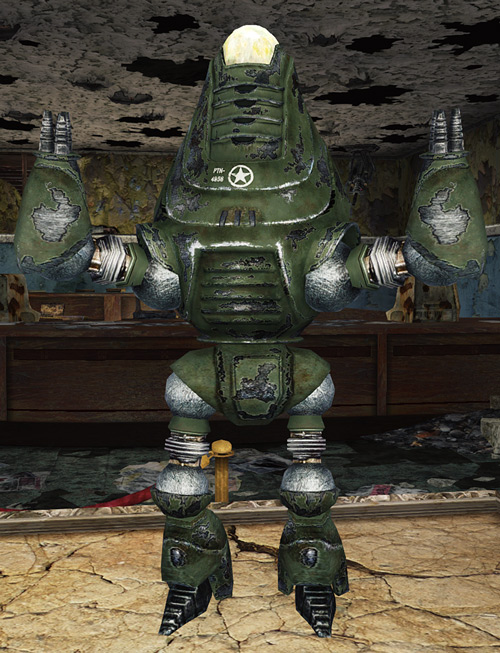