Fantomah probably was the first super-powered comic book heroine, and was one of the features of Jungle Comics during the early 1940s. Yes, *all* the stories in these comics were about the jungle.

She is a magical spirit of vengeance — not unlike the Spectre or the Ghost Rider, but with a 1940s glamour hairdo and a négligé. She kinda is the Black Widow (Claire Voyant) mixed with Lee Falks’ Phantom (aka the Phantom of the Bengal) and a huge dose of Rima the Jungle Girl.

Though the stories are signed by the pseudonymous “Barclay Flagg”, Fantomah was actually one of the creations of Fletcher Hanks, a rather… peculiar writer and artist. Our Amazon recommendations explain and reprint his comic books career (and have awesome titles).

This profile only covers the “Barclay Flagg” stories – Jungle Comics #2 to #15.

Fantomah wields powerful and versatile magic-like powers. She’s one of those “can do whatever she wants” characters. 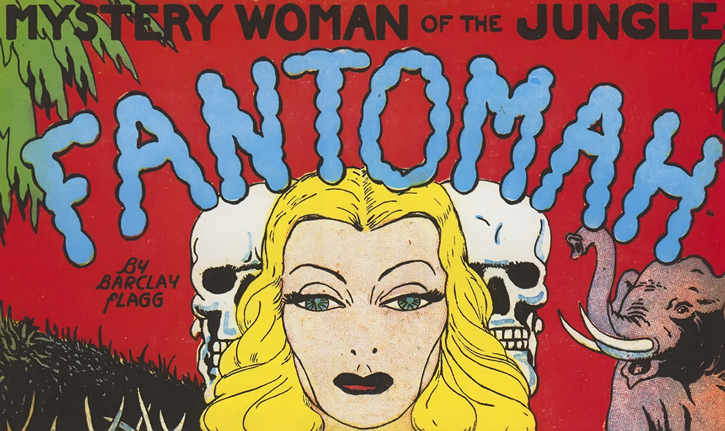 On the other hand, outsiders routinely ignore her. Even when she’s an obviously supernatural death-aspected manifestation, the bad guys always ignore her warnings and treat her as a non-entity… until she strikes. The fools !!

In some captions, Fantomah’s powers are described as mental abilities such as “super-thought rays” and “super-willpower auras”. However, other captions describe it as “wizardry” or “magic will power”.

Fantomah seems to operate most of the time as an ethereal projection – an intangible apparition that can fly around, and appears and disappears at will. She can fully use her magic to affect the world around her, even though no mundane thing can touch her.

This intangibility is *not* explicit in the stories, and may not be the authorial intent. But people react to her as if she weren’t quite there (unless they know of her power), she seldom physically interacts with anything, and early on her attire seems translucent (which is… odd given the era.).

More tellingly, few people ever try to attack her even when she’s just standing there. My guess is thus that people can see that she’s a sort of ghost or hallucination and treat her that way, but the relatively simple colouring and printing techniques of 1940 couldn’t convey that – albeit the captions never mention it either.

The only recurrent physical interaction is when Fantomah grabs an evildoer and carries them to their doom (note that nobody ever tries to struggle free when that happens).

I assume that she’s doing that telekinetically, levitating her victim next to her astral form and only appearing to physically grab them out of habit. When taking several victims, they just float in an aura of light surrounding the flying Fantomah.

When Fantomah is affected by attacks, these are exotic energy onslaughts – and even these have very diminished effects on her compared to a normal person. She did magically knock out a guy trying to attack her with a knife, though (perhaps out of general caution).

The Pit of Jungle Horrors

Deep in the jungleland, there is a gigantic pit where troglodyte monsters from an “unfound world” reside. Fantomah — and perhaps the local judiciaries — sometimes send killers there to be executed. 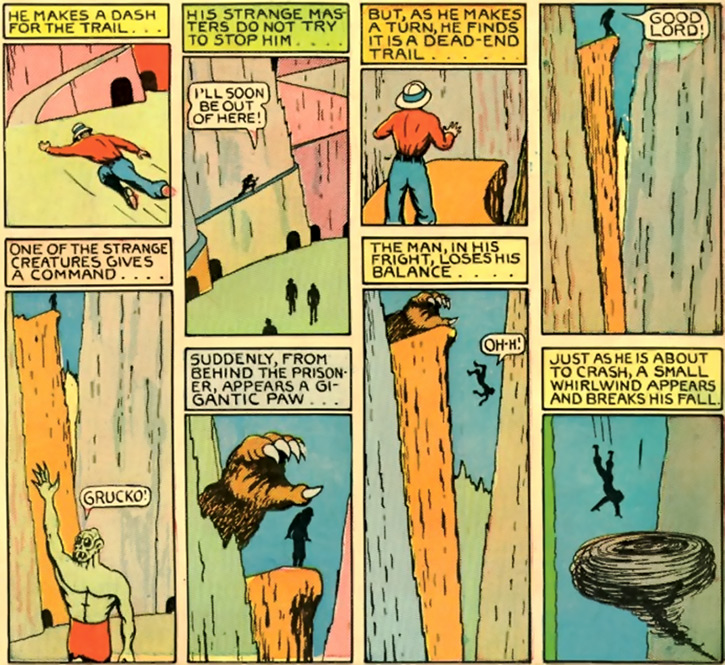 The green, fanged humanoid residents have many caverns all filled with monstrous animals (such as throngs of giant white cobras), and can animate the very rock at will, usually to form giant clawed hands. The topography is irrational, the cliffside ramps never lead anywhere, and there are hostile gusts of winds (which the masters of the pit can also command).

It seems possible the the Pit is actually another dimension.

The “jungleland” also had a volcano where stony-faced silent humanoids lived without any belongings, and without ever doing anything except eating rock and magma. This may be related to the Pit, and Fantomah could turn men into such creatures.

Fantomah demonstrated knowledge of, and power over, the Southern American jungles but they did not seem to be part of her turf.

“The jungle” had many species of giant animals – usually twice the body weight of ordinary specimen, give or take. Giant lions, panthers, vultures and snakes were seen.

Fantomah is a mysterious entity who protects “the jungle” from outside depredation, and particularly the greed of White imperialists. Nothing is known about her nature or her history.

Apparently, Fantomah wasn’t active 2,000 years ago, since she had only heard second-hand of an attack against “the jungle” back in these days.

Welcome to the jungle

“The Jungle” seems to be an indeterminate mishmash of various African and Indian elements (and elephants), with occasional Middle Eastern bits thrown in.

In Jungle Comics #12 we briefly see a map that indicates that Liberia is part of “the jungleland”. It also confirms that the story takes place on Earth (or rather, on a Earth).

It is also endowed with some sort of “primal purity”. The later is not explicit in the story, but “the jungle” keeps being presented as a place of innocence, peace and communion with nature.

Fantomah’s “cases” were short, and include : 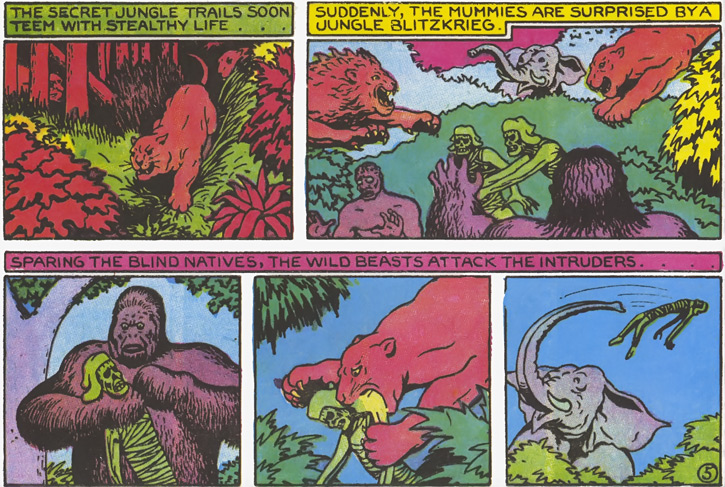 This is a 1940 US comic book, so Fantomah simply has to be White – even though she clearly considers “White men” to be unwanted outsiders who are probably going to cause bad trouble (see our Ace Harlem profile for an atypical example of a 1940s Black comic book hero).

She is originally clad in a dress that seems at least partly translucent (though of course her body isn’t actually detailed in the art, since this is still a 1940 US comic book since the previous paragraph). 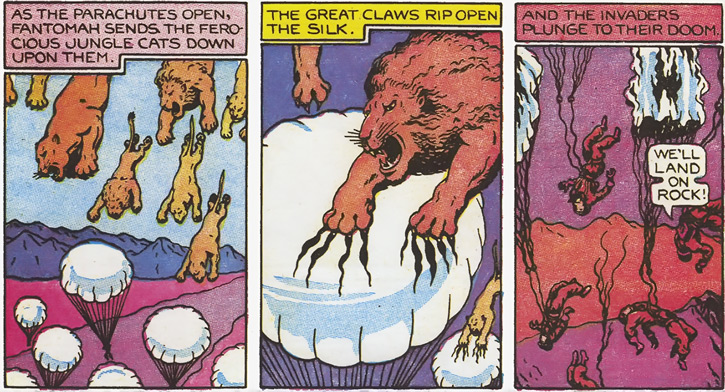 This soon evolves into a very short LBD with a translucent skirt extending the minidress’ length to the knees – perhaps a sort of négligé. Sometimes the translucent part is tinted red. From the rest of Fletcher’s history, one suspects that the changes to Fantomah’s dress were requested by editors.

One of her schticks is to turn her face into a skeleton – sometimes a green or blue one, and often giving off a sinister magical glow. Her hair is unaffected, resulting in a odd and ghastly sight. She often manifests as just a floating head and hair with the skeleton face.

When Fantomah goes macabre, this means that she is about to strike or, at best, give a final warning (that will be stupidly ignored).

Fantomah’s usual modus operandi is to assess what is happening with her mystical senses, appear on the scene as the criminals are about to commit the deed or are in the early stages of their rampage, and warn them of terrible consequences. 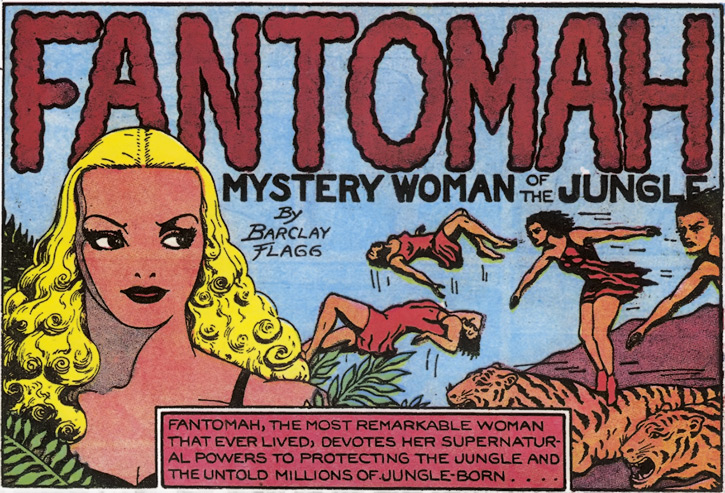 People almost always ignore her warnings and do bad things, at which point she turns her face into a skull and uses her magic to enact grotesque retribution. She only acts once damage has been done (though she’ll sometimes use her spells to repair most of it).

It thus seems likely that she is bound by some sort of mystical rules of engagement. She might only be able to act in the name of vengeance, so somebody has to actually do a bad thing first.

It seems possible that she cannot act against the bad guy until an innocent has been killed, though some animals apparently count. She can act to prevent carnage if she can reach the scene in time, but apparently she cannot strike against the evildoer until someone actually died. The story aren’t consistent about that, but it’s a decent approximation.

Though Fantomah once saved New York City, her dialogue indicates that her goal was to save the captured giant panthers of the jungleland, not New Yorkers – who are presumably not her responsibility. She stated a few times that her role was to “protect the jungleborn”.

An important aspect of Fantomah are her elaborate, cruel and sort-of-poetic vengeances upon evil-doers. She usually has the jungle kill her enemies (often through wild animals), and they always die terrorized and in great pain.

“Behold the arch ! Your only way to escape is now closed to you ! Closed by Fantomah !”

“Fantomah wills it !” (her catchphrase when casting a nasty spell, albeit in just one story)

“You have defiled the jungle’s sacred city, so you shall fly back to your own land as objects of disgrace ! Fantomah wills it !”

“You fiend ! You shall die by your own evil creation !”

“You cannot harm Fantomah ! Now you shall feel the secret power of the jungle ! You are going to the secret pit of jungle horror !”

“You shall never steal, for here you’ll find nothing to steal ! Farewell, you fool !”

“That’s the end of all of them ! The invaders have felt the power of the jungle !”

“That is Zomax, the demonized marine scientist ! He is seeking an unjust revenge !”

Fantomah would be an unusual form of a Ghost Rider, since there were many such skeletal spirits of vengeance across the centuries and continents.

Fantomah is very reminiscent of the Spectre, and she’s an exact contemporary of his (by cover date they debuted on the same month of the same year).

One possibility is to push her adventures to the turn of the XXth century (say, 1850 to 1935) and have her be the first host of the Spectre before Jim Corrigan, after Eclipso’s fall. She eventually chose to pass on, and a few years later Corrigan was killed and became the new host.

Bonuses and Limitations:
Animal Handling is presumably limited to animals of the jungle.

The Socially Inept Drawback allows for giving Fantomah robust Mystical Attributes, yet model the fact that all sorts of idiots routinely ignore her Character Interaction attempts and brush her off. The fools ! 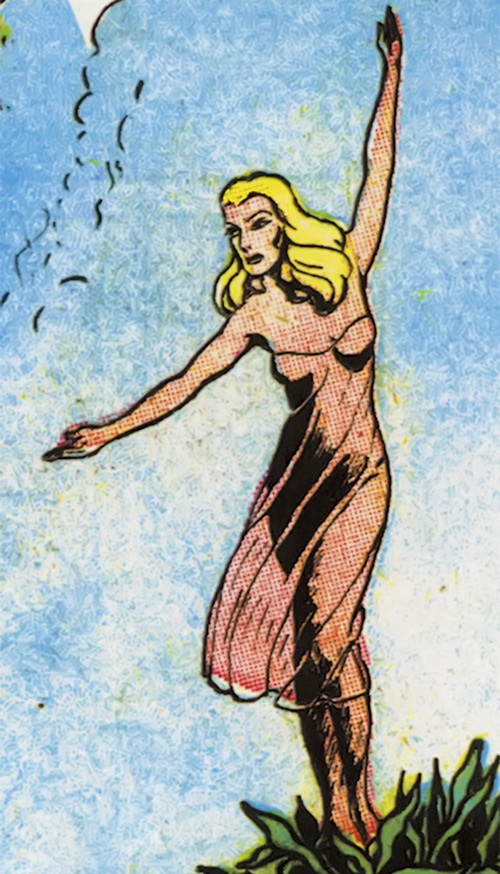 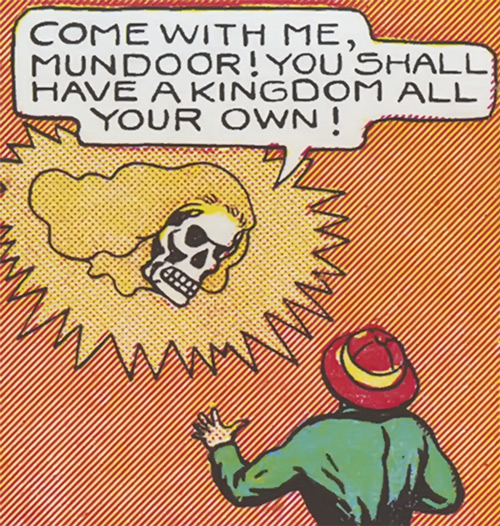 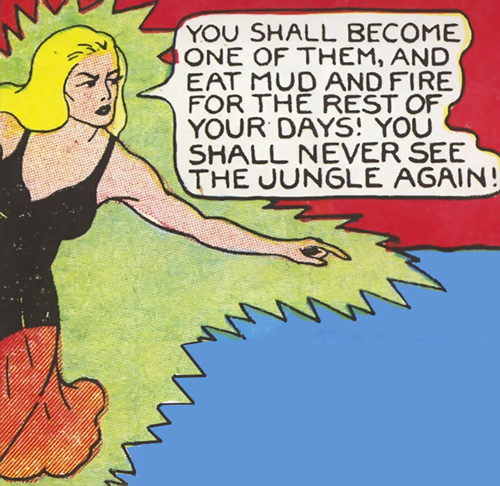 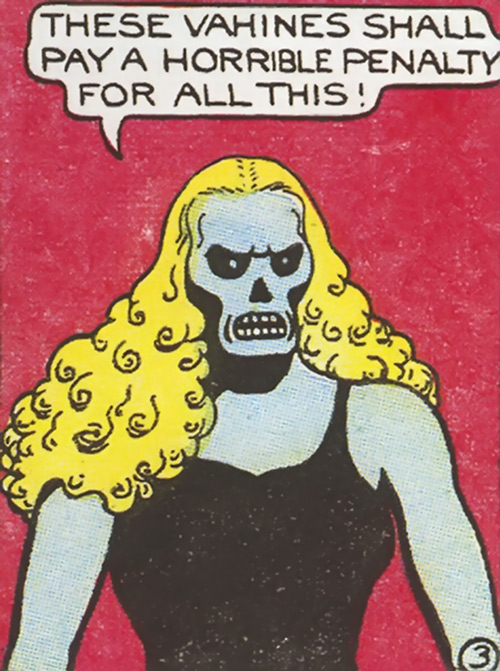 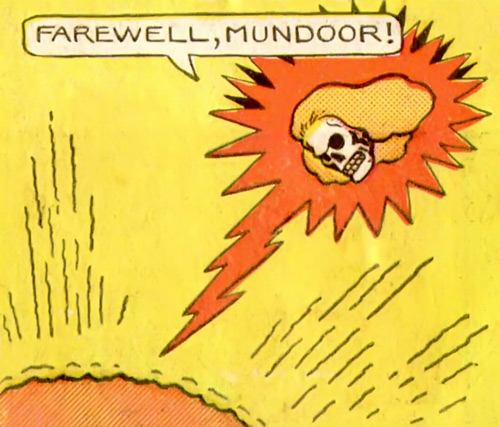 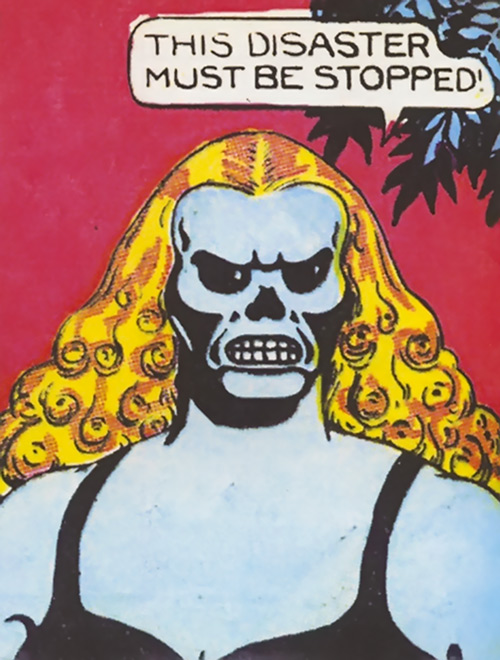 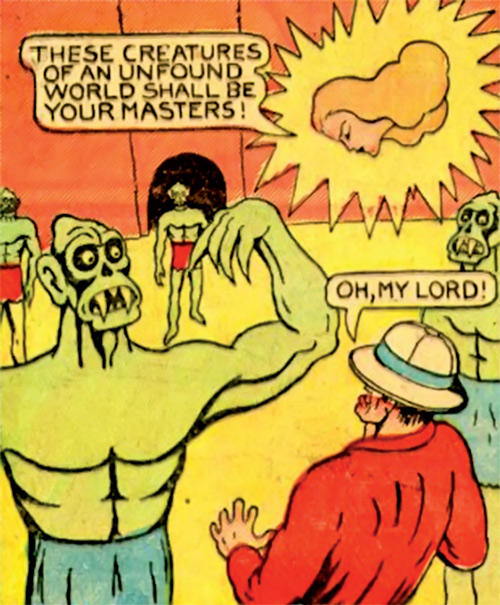 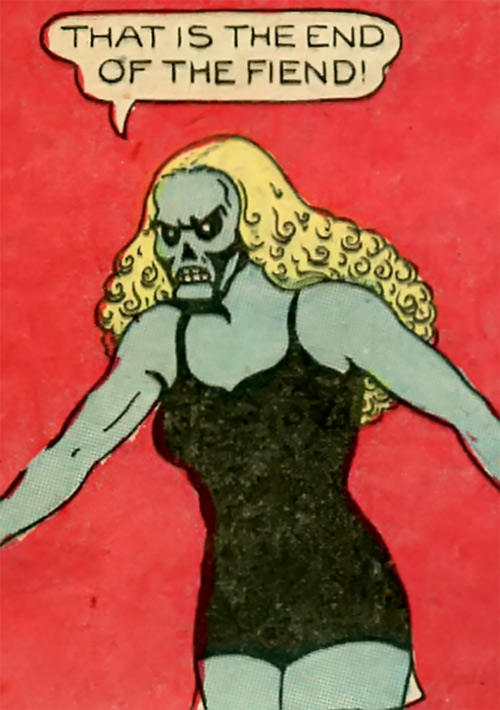