Writeups.org (WORG for short) is the content archive of the DC Heroes online community now working from Groups.io.

It is a fully independent, non-corporate site.

That it’s from the late 1990s is important. The Internet back then was very different. It was envisioned as a free space of expression and sharing – not platformized, not monetized, not corporatized, not weaponized.

This screenshot is the homepage in May, 1999. You could open and close the folders, subfolders, sub-subfolders… That imitated the way Windows ’98 worked back then.

Among other ancient bits of design, the thing at the bottom is a web ring. That’s what we did before powerful search engines. Web sites about a same theme linked toward each other, and readers could discover new sites this way. This made finding content much easier.

The content existed on a personal homepage – that was before social media, and the idea of “blogs” was still recent (1998, give or take). Its URL was http://perso.club-internet.fr/dc_hero.

It’s still here on the Wayback Machine  . But nigh useless since the cgi-bin couldn’t be saved.

The site launched with 200 profiles, which was totally huge. 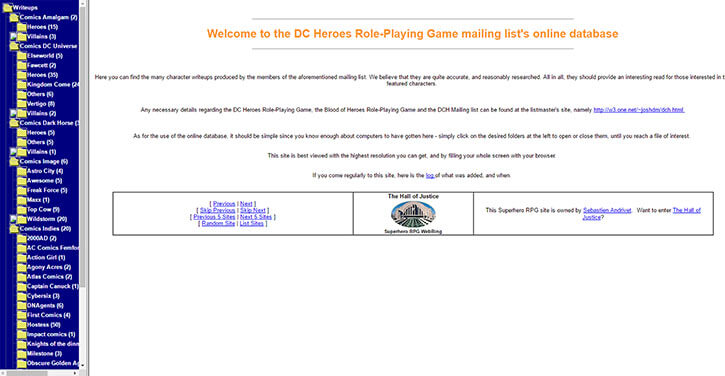 This homepage is from June, 2002. The content is now in a SQL database and the writeups.org domain had been created. These were two critical technical advances.

The design is still very much home-carved – without any design competence or technical skills.

It’s here on the Wayback Machine  . Though again I don’t think you can do much with their save.

As you can see there are almost 850 profiles at that point, which was totally huge. 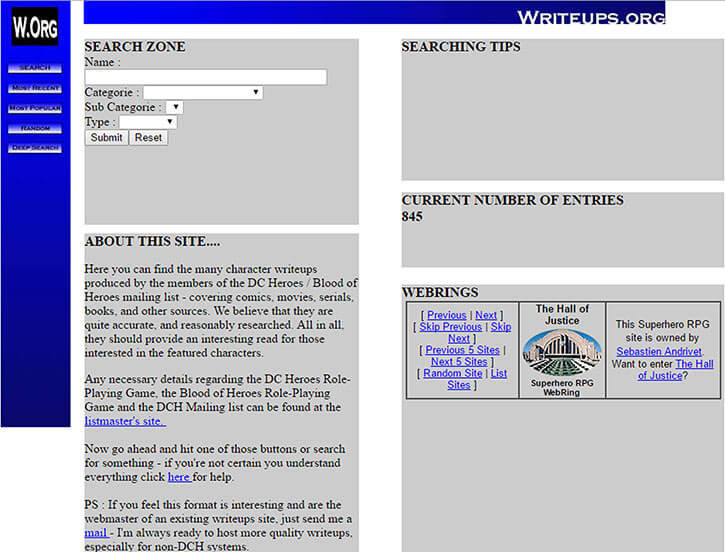 This screenshot is from October, 2005.

Some painstaking design improvements, but at this point the site is clearly looking low-tech compared to corporate sites. Having the blue bars fade out was the zenith of my graphic design skills.

This was the second-longest-lived look-and-feel for the site. It’s still here on the Wayback Machine  , albeit useless.

As you can see the headcount is above 2,300, which was totally huge. 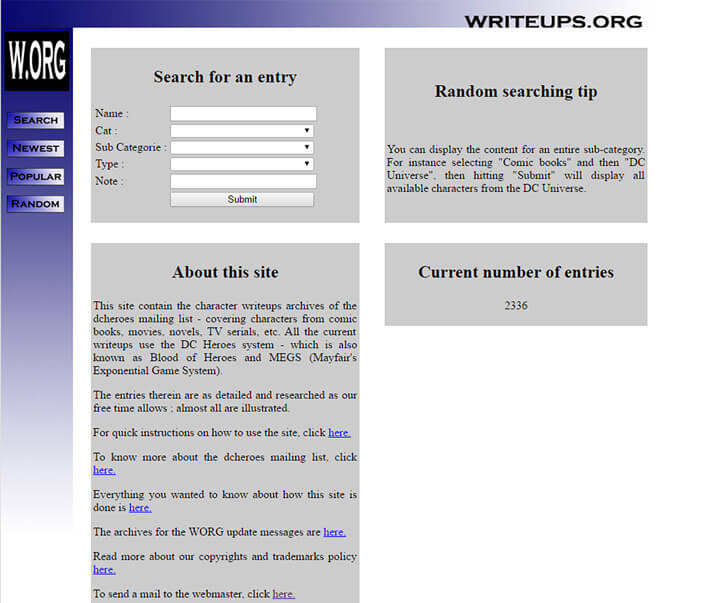 After months of hard work, in April of 2009, the site switches to a much more credible layout.

This is the “gamma-powered” version. It was too busy though, and web design trends would soon evolve away from this approach.

It’s here on the Wayback Machine  and is more or less usable (though I doubt most profiles are saved).

The announcement for the 2009 evolution is still on the site.

It had 3,991 entries at that point, which was totally huge. 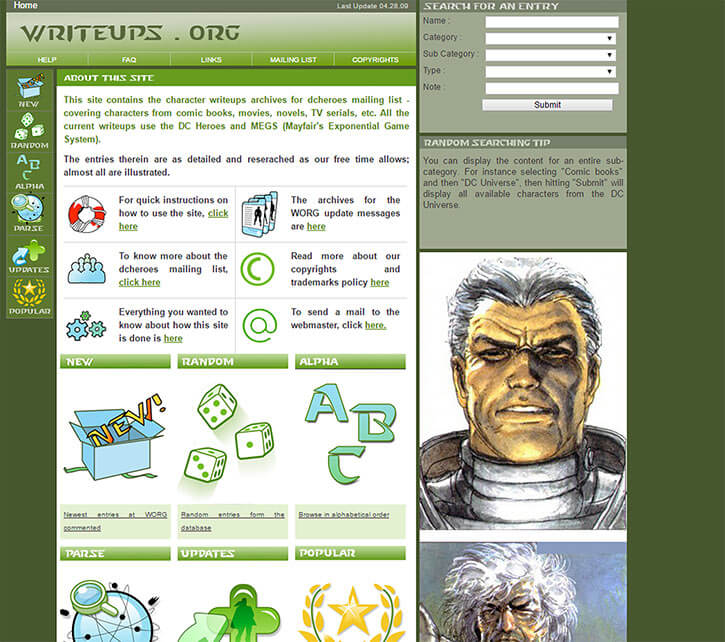 An almost entirely cosmetic change. The “gamma powered” layout felt too stuffy and behind the times.

In order to hide my complete lack of UX and design skills, the new layout goes for a minimalistic-ish, airy, flat-ish appearance to limit the opportunities for mistakes.

It was deployed on the 22nd of September, 2012. The bulk of the work was about cleaning the HTML and reorganizing the images. This took years.

The Amazon recommendations appear during this era, in part to clearly indicate the material in which the characters appear. We also greatly improved the typography, and the quality and size of thousands of images.

The first use of video also dates from there.

The announcement for the 2012 evolution is still on the site.

This version of the site reached 5,459 profiles, which was totally huge. Especially since hundreds and hundreds of old profiles were fully redone during this era, explaining the apparent slowdown. 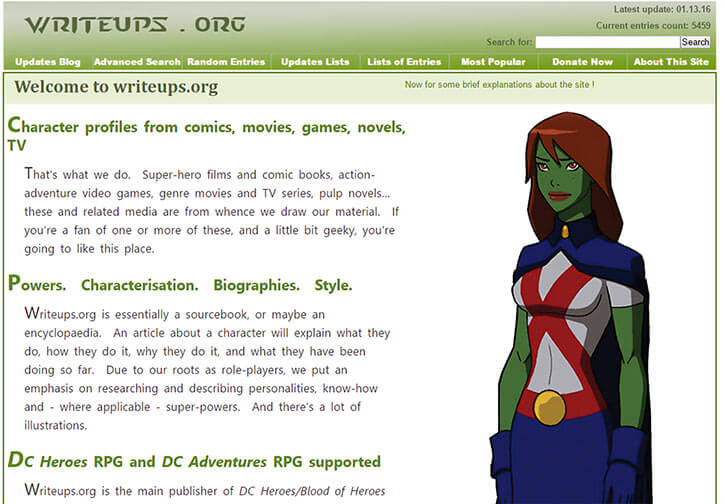 In early 2013, the site took a nasty hit in traffic. For reasons having to do with Google, that I never elucidated.

We recovered over the following months. But it was now obvious that the site needed a full overhaul – for visibility, stability, design, user experience, readability, searchability, reader engagement, etc.

This would result in the first version of the site with professional UX and design, a modern code base (WordPress), a faceted search engine, taxonomies, semantic structure, a sitemap, etc.. We caught up with years and years of best practices and technical standards.

Huge improvements all around.

There was a welcome post explaining all the 2016+ changes.

It took 2½ years until I could find enough time, data and free consultations with professionals to have definite specifications.

From there it took two years — Summer of 2014 to Summer of 2016 — of cleaning up and preparing the content. Lack of budget meant it had to be done by hand and via light scripting. Mid-2016 is when we could actually deploy the new version.

*Then* another editing pass, called the Big Sweep (a pun), took place over three years. At the close of August, 2019 I announced :

The Big Sweep is a process where all articles get a Context section, hyperlinks, no overlong paragraph, a blurb (the ones you see on our Random page or our home page) no or few overlong sentences, etc.. Quality and user experience improvements.
Right as of this writing, out of 5932 articles, there’s 99 left to sweep. And these are the most obscure entries on the site, with far fewer readers than the average. So the odds of you getting an article that doesn’t yet have the minimal features are darn low.

Over 2020 and 2021, there was a new sitewide sweep. The first batch of tags was deployed through every. Single. Entry. 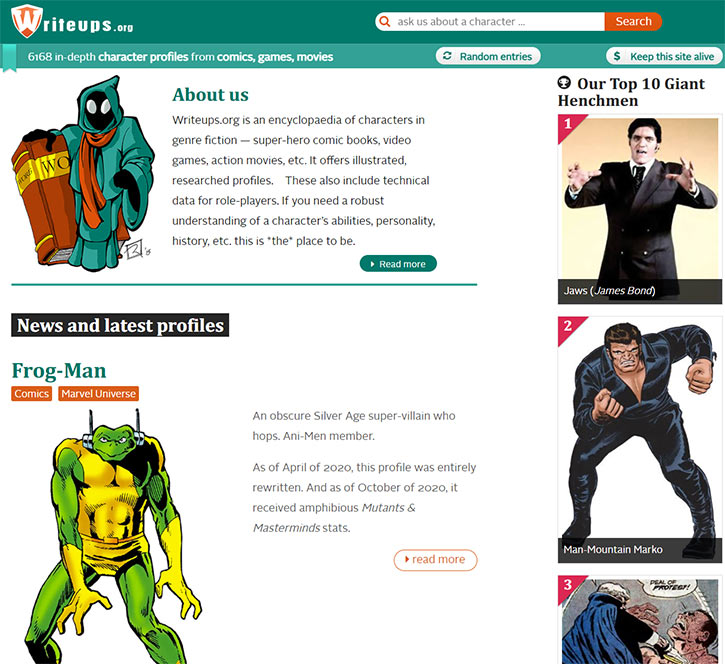 After 5½ years of this, a new version was designed that :

There was a mini-blog explaining the 2022+ changes.

This era too will be a multi-years transition from the pre-2022 article format to the 2022+ article format. These things can only be done by hand, entry by entry, image by image.

As of this writing (2022), the full transition is expected to be over by 2034. Everything is getting rebuilt to better quality standards, and a lot of text and images is getting redone from the ground up.

It also corresponds to the point where the site is sophisticated enough that we need people with expensive skills to get stuff done. In fact, the next upgrade will likely require a web site consultancy, with a cost in the low four figures.

The very first version of this site was based on a javascript kindly written by Mathieu “Casio” Charreyre.

The second version was the first version as an actual database, and was kindly hammered out by Yann “POV” Coupin and Aymeric “Mric” Barantal.

The third, “blue fade” version had code done by my friend Joël “Joekid” Marcadet. However I was the one to blame for the layout and integration (if you can call them that).

The fourth version (aka the early 2009 version, or the Godot Version) was done thanks to Ann Sophi Digsmed’s Photoshop templates based on my crowded, amateur design. She delivered those come Hell or high water (literally, in the case of the high water), and I cannot thank her enough for that. Some of the pictograms were drawn by Sara Crubellier when Annso ran out of time. The brand new code was energetically written by the inimitable Emmanuel Magnier.

Evolutions from 2009 to 2012 were mostly coded by me, with technical advice from Greg Rushton. Much of the Open Search Server implementation was done by the master, Emmanuel Keller.

WORG 2012 (aka the “Clean Green” version) is mostly my fault. The PHP adaptations that required actual skill were done by Bryan Gittens, a sleuth who solved such mysteries as the All-Conquering Input Field or the Non-Euclidian Resource Pathing.

WORG 2016 had its theme designed and built by Jacques Martinet  . Search engine developments by the dauntless Emmanuel Keller  . Great big advice and consulting by my buddies Fleur Marty and Nicolas Duteil.

To avoid clutter, all our thrice-yearly situation reports have been moved to a single, rather long page.

So that’s a pretty detailed history of what was going on, why, what was on our mind, the evolving priorities and projects, etc..