For more context about the Warframe game and its setting, see our Warframe primer.

This is just a repository of my current roster. It’s mostly meant for colouring and details inspiration for WF players. And for folks who like peekchurs of baroque space cyborgs, I guess.

The images are simple (but high-resolution) screenshots, since I can’t justify the time it would take to erase the background and do basic adjustments.

Just about everything is free in-game, except for (IIRC) one colour palette (extended basic, for plat) and a Tennogen helmet for Rhino (my one indulgence). Everything else is obtained with Nightwave cred, promotional drops, etc..

In rough order of most to least played in me current roster.

My main. Having red is the obvious choice given the themes. 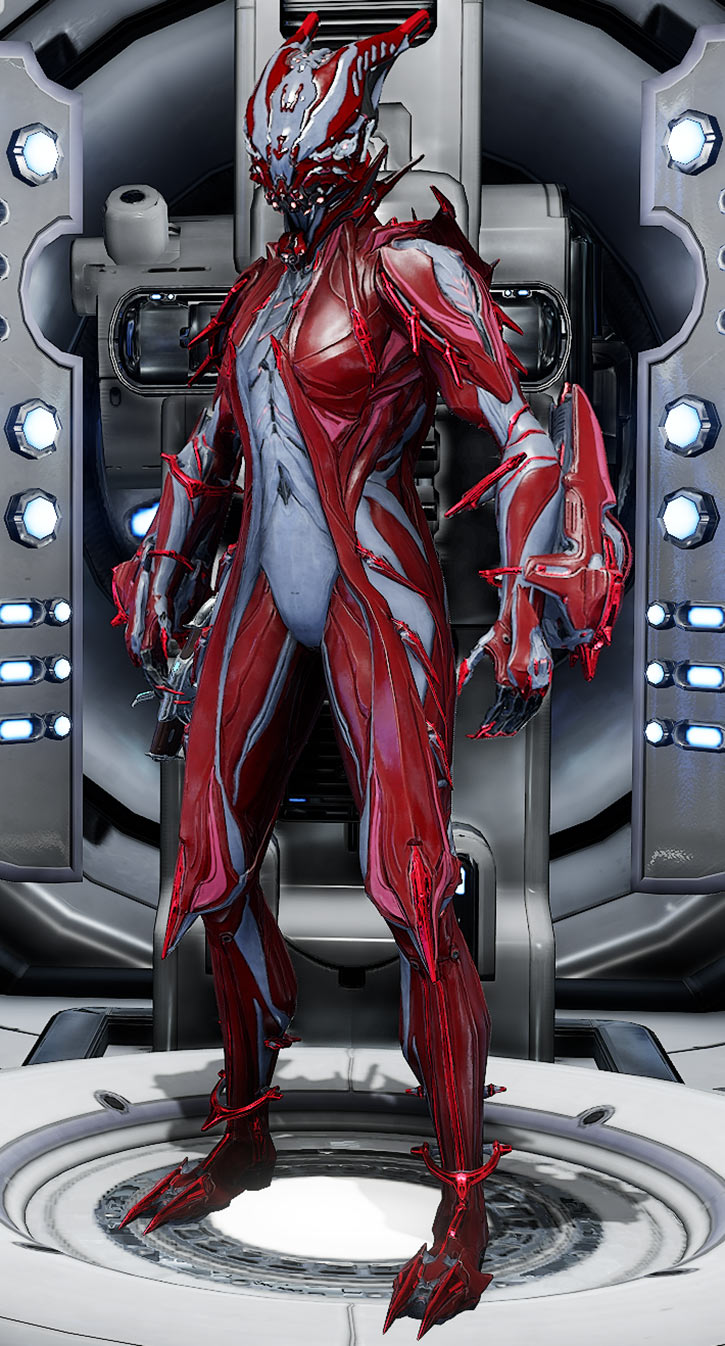 My main for defensive applications. There too going for an obvious “cold” colour themes, though with more blues and using the metallics as warm contrast. 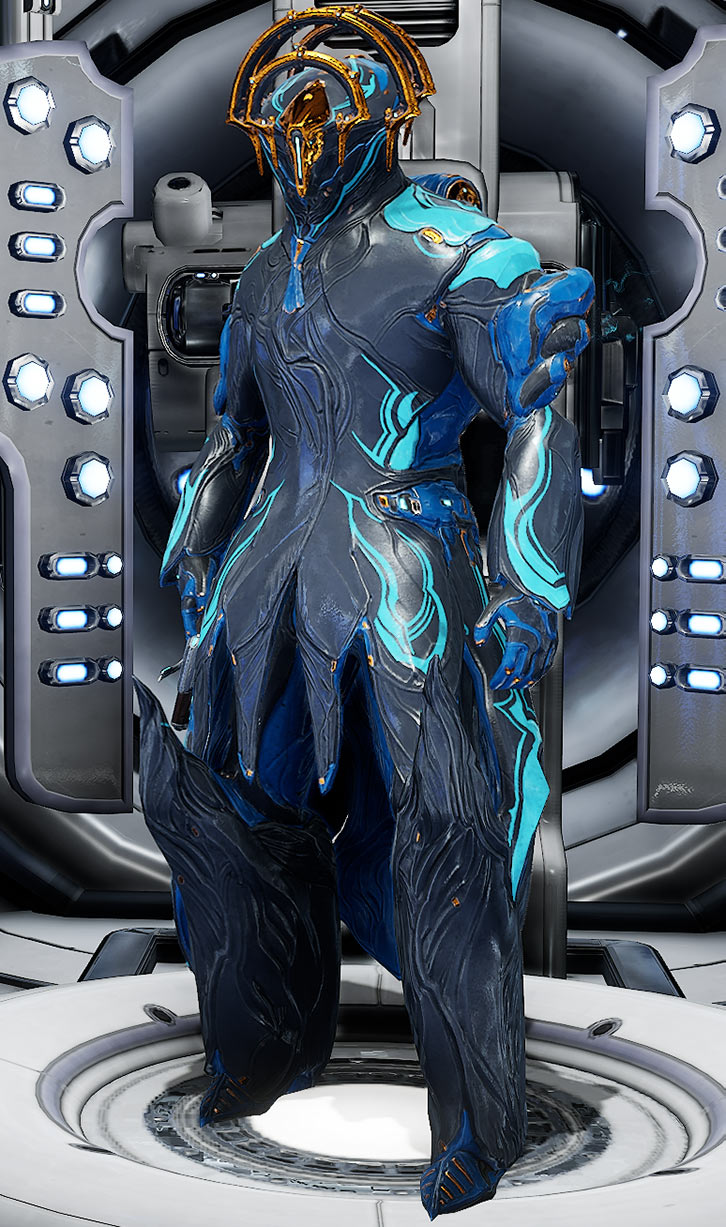 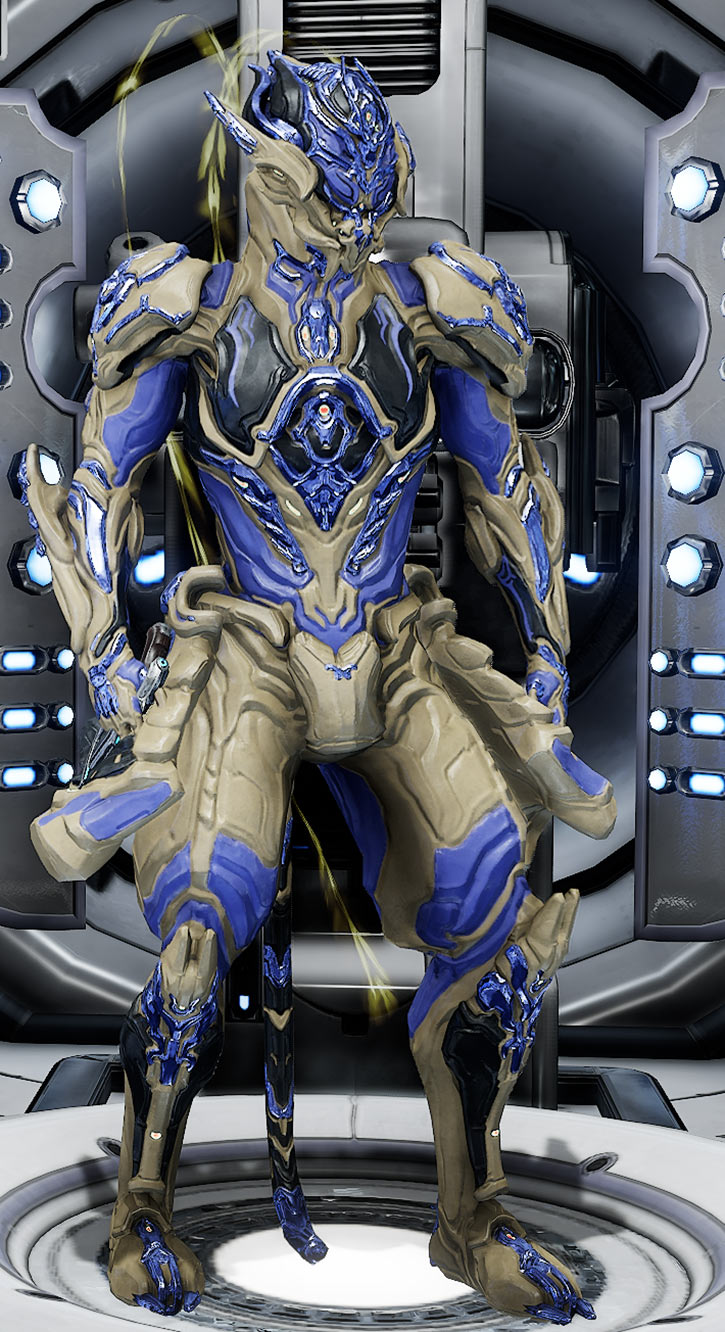 Routinely used to cheese Corpus spy missions and especially Lua\Pavlov. Quick and easy way to kick-start weapons and pets before levelling them in the field. I’ve stuck with the “Baron Samedi” aesthetics, with a smoking-and-skull-face core. 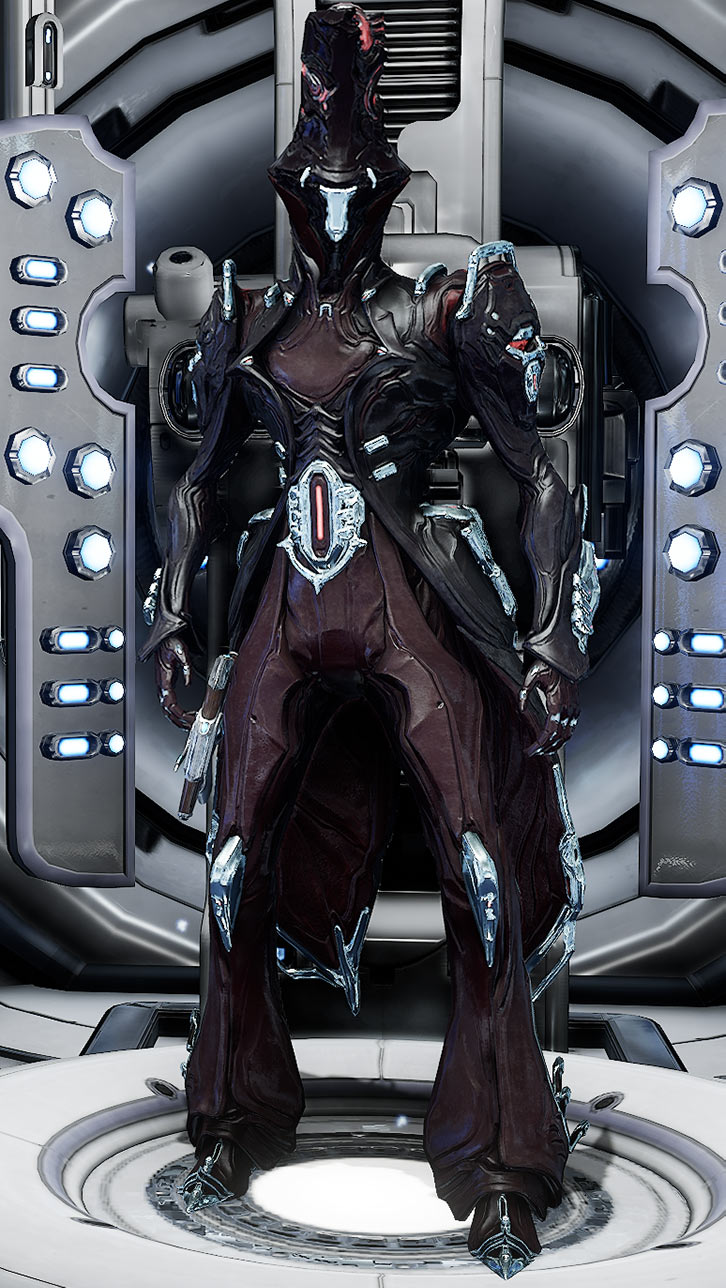 Khora is fantastic at controlling the environment – in a slaughterhouse fashion. She’s pretty hard to recolour, but this old god and blood tones more or less works. 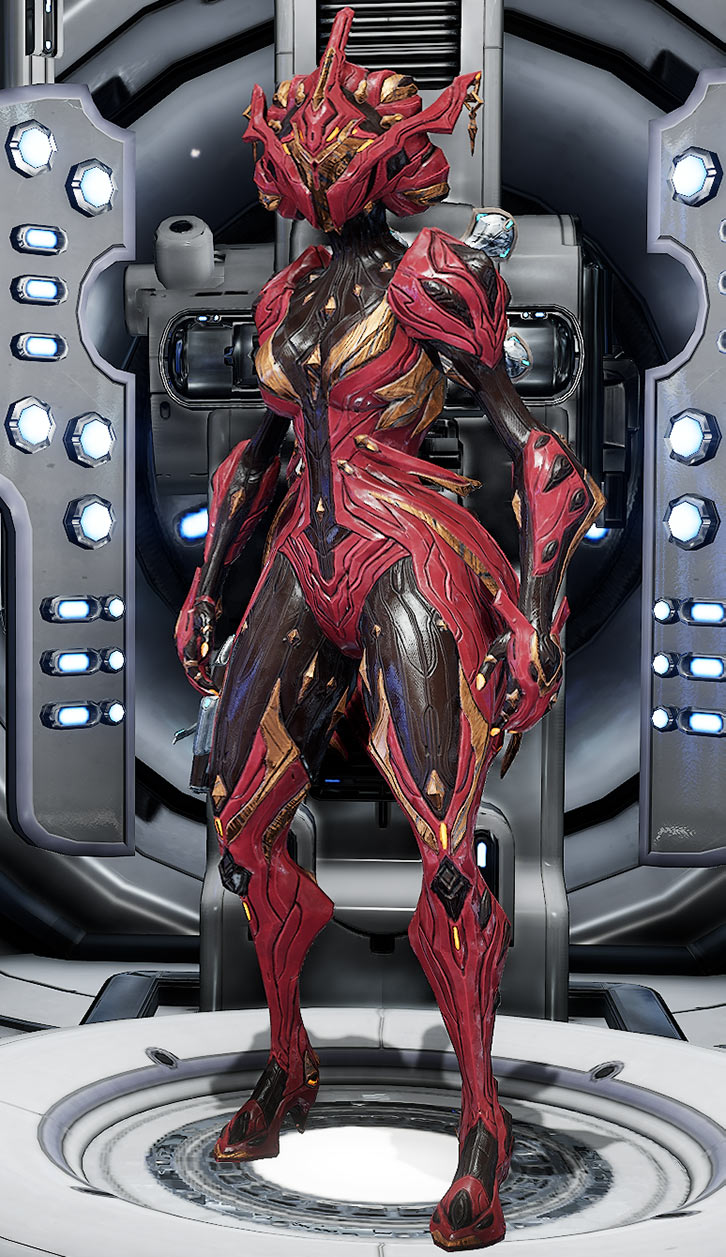 I can’t invest too much since her prime is on the horizon, but she’s a favourite. Chiefly used for Maroo’s weekly, low-ish-levels open world, Jupiter, and cheesing a number of mastery rank tests. The “yellowjacket” colouring is also an obvious one, but it works. 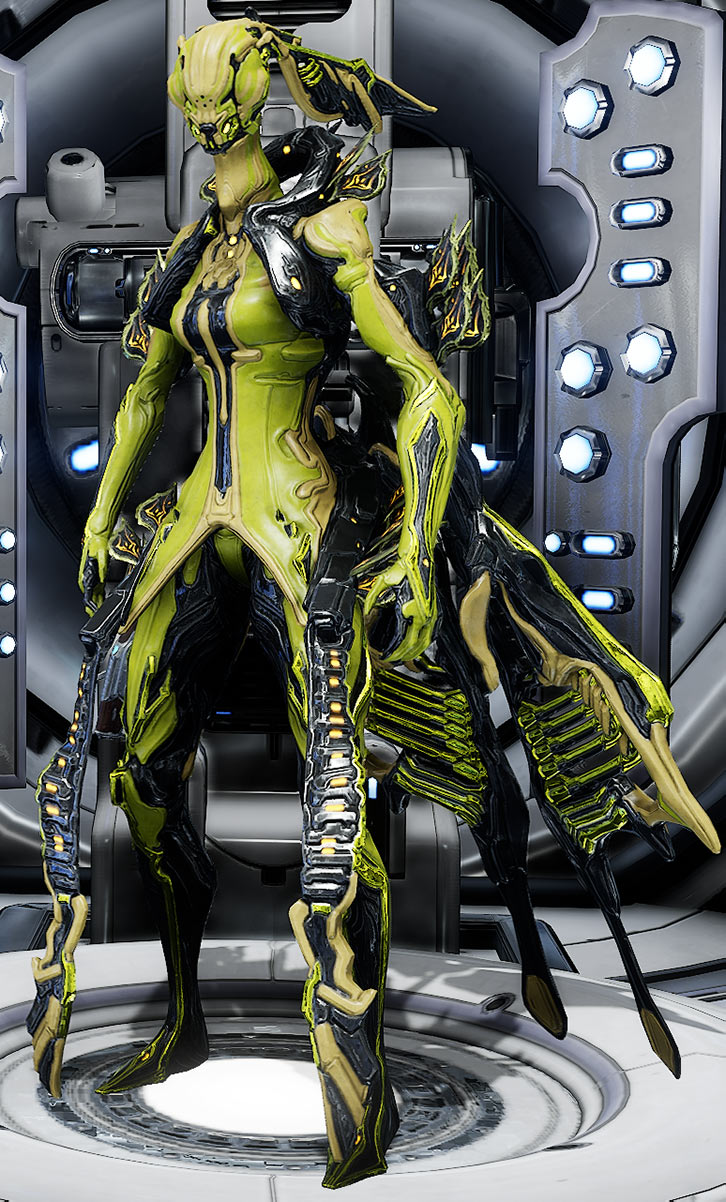 I don’t find him as tanky as most, but he’s tough and straightforward. I went for a faded, time-worn mummy look to match the theme. 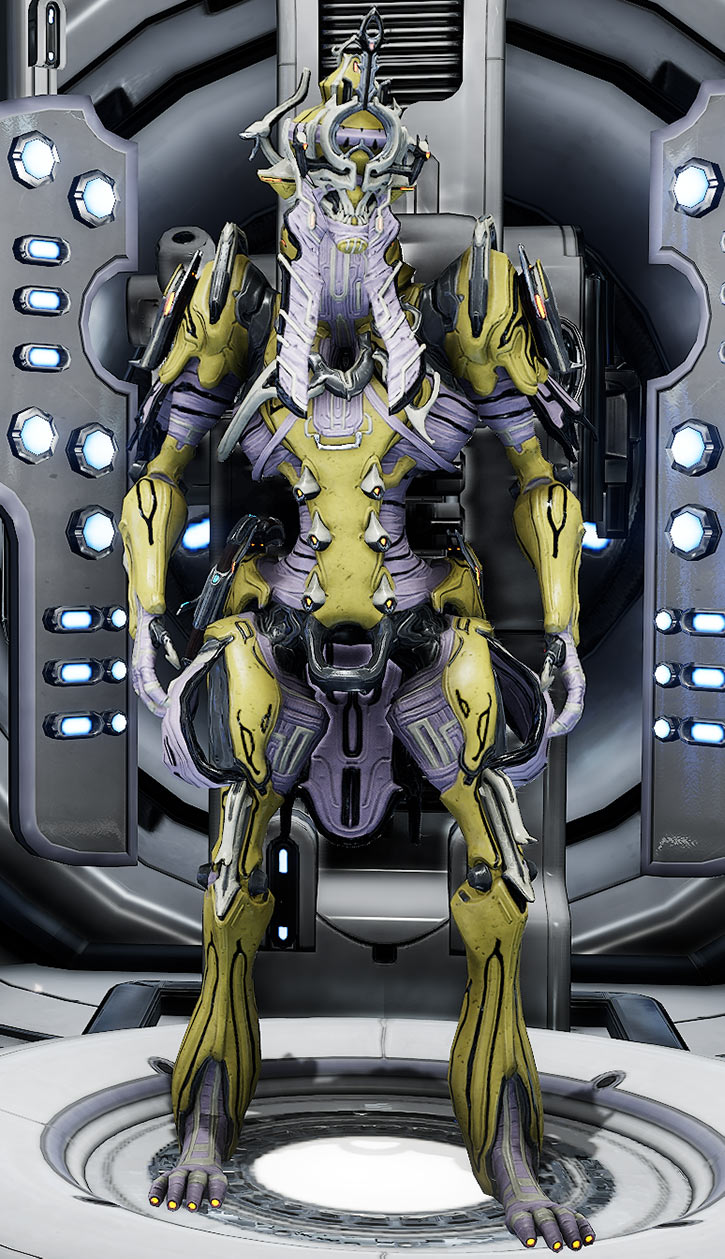 My capture expert, also used in open world situations (especially to ignore enemy gunfire in the Vallis). I’ve themed her after the Brazilian flag, by idea association with tropical birds. 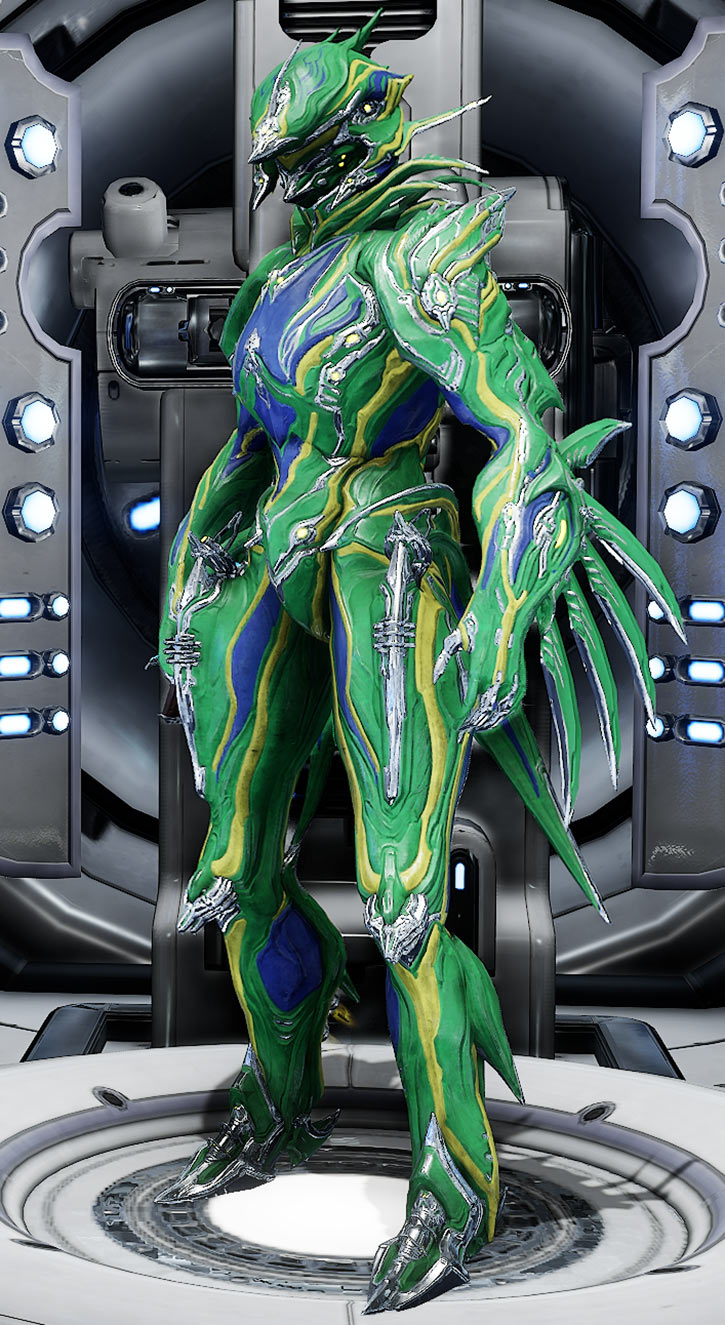 My interception expert, she mostly works to get Axi relics on Eris\Xini. Here again I went for something in-theme, with colours evoking some mantises. 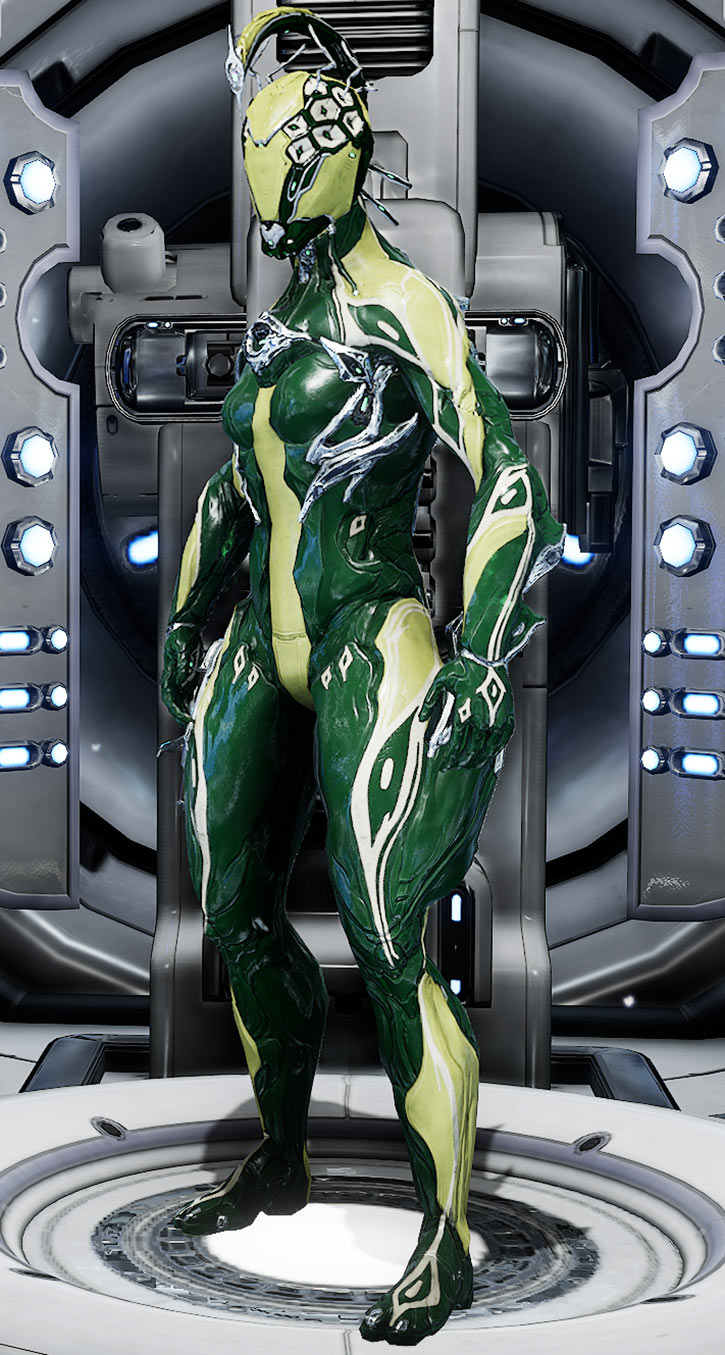 Straight-up fighter with powers that fight so you can fight more. I ended up going with “grim avenger of the night” colours, which make me fond of him. Midnight Rhino ! The rhino wot roars in the night ! Avenger of sundry things ! Stomper of crime ! 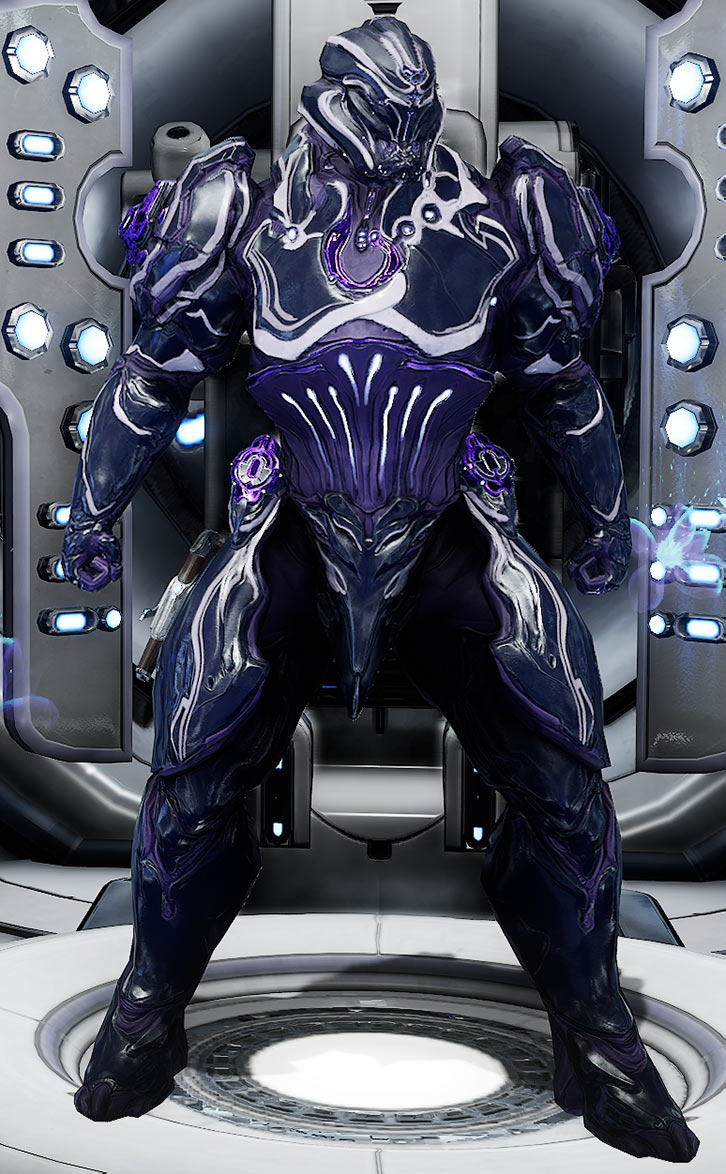 Chiefly used as my Onslaught expert for Nightwave challenges. To stick with her Infested theme I went for unhealthy, unnatural colours and additional asymmetry – without being loud. 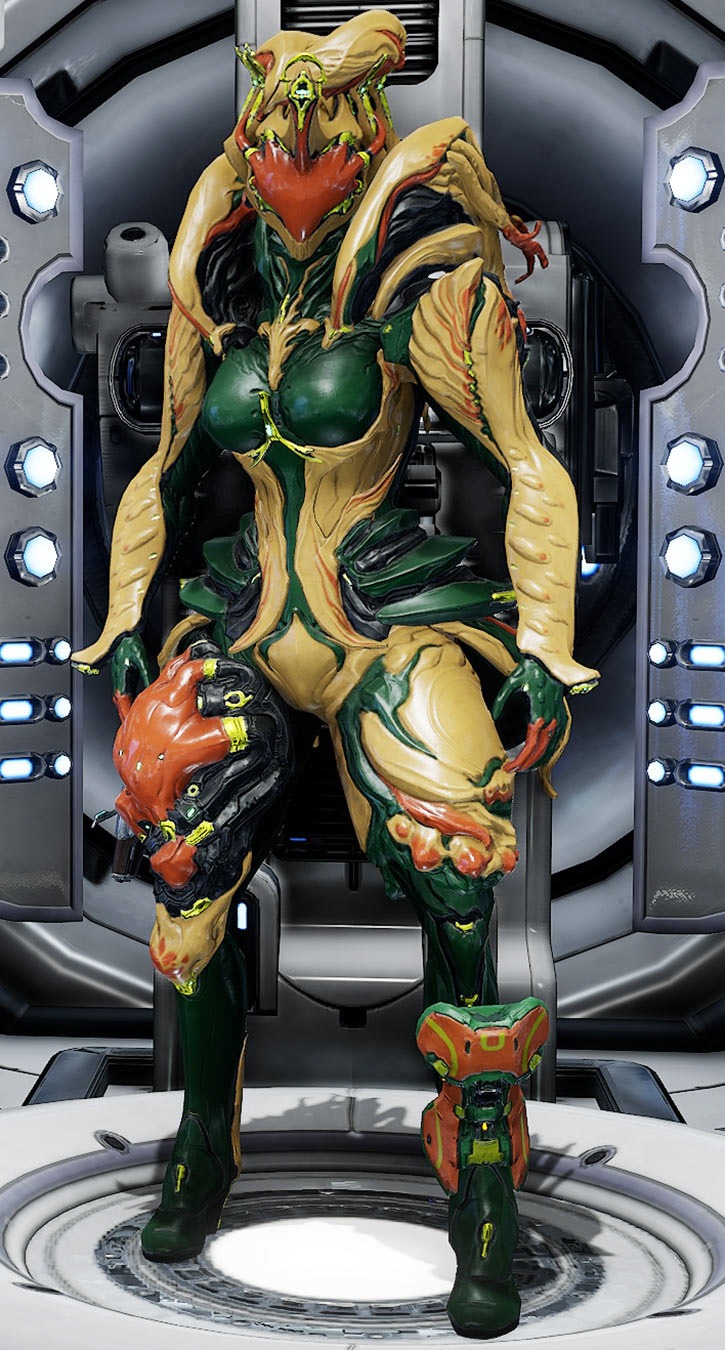 He’s fun ! But since there are so many frame, I mostly used him to solo thermia fractures. He also sees action when rushing Phorid invasions – the way Mesmer Skin reflects Phorid’s killer missiles feels great. Here I went for a spectral colour theme I’m quite happy with, simply aligning with the default energy colour. 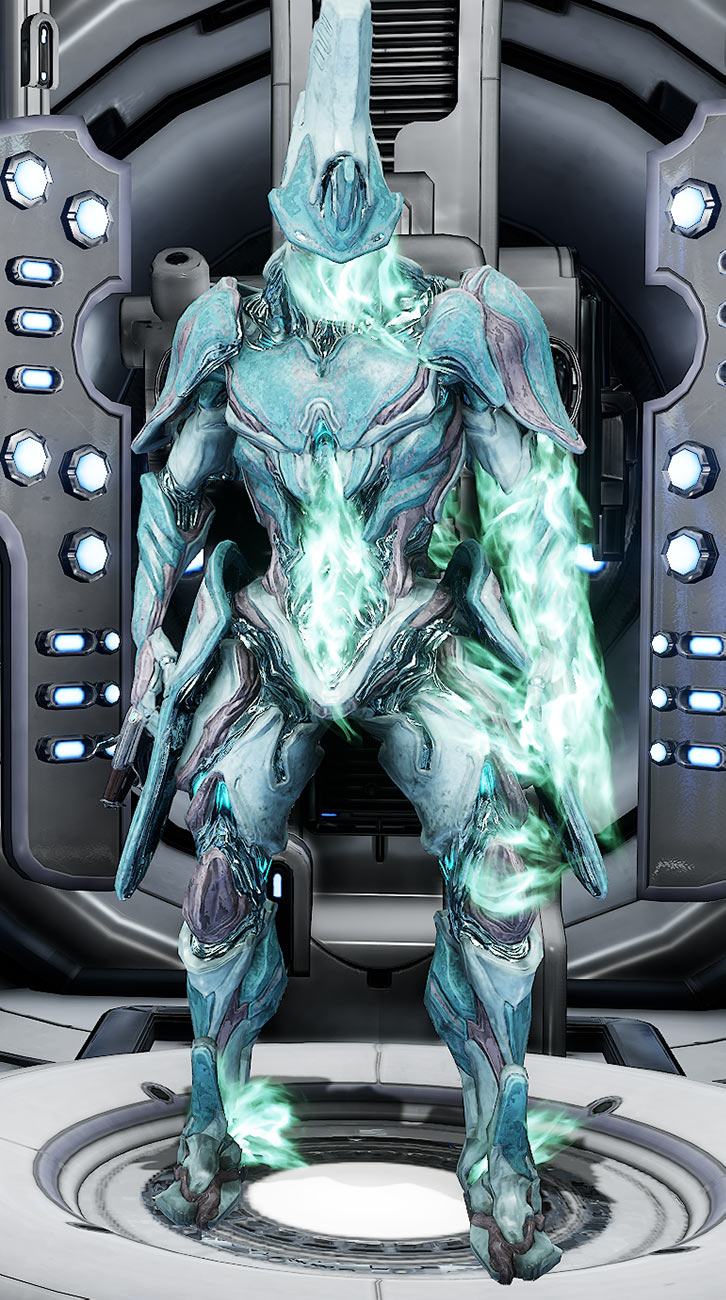 I’ve only levelled recently (with a build that’s big on durability) but she’s becoming a favourite. I think I’ll use her to level most of my secondary weapons in the field. I’ve stuck to her cowgirl/pistolera theme by using brownish leather tones and earthy copper highlights. 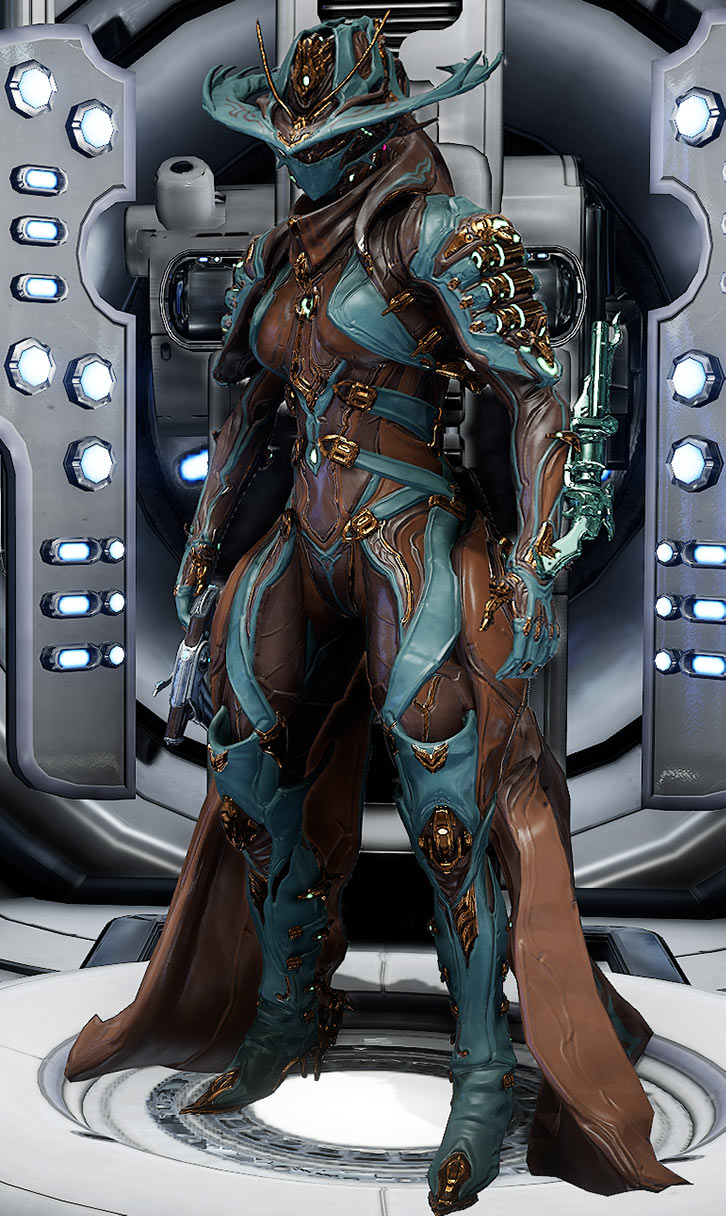 He was chiefly used to farm Condition Overload on Saturn\Ophelia, and similar. I went for a “skeletal over-the-top necromancer” thing – again with an in-theme, simple approach. He’s my only frame with a cape to stick with the theatrical looks, and the existing ornaments. 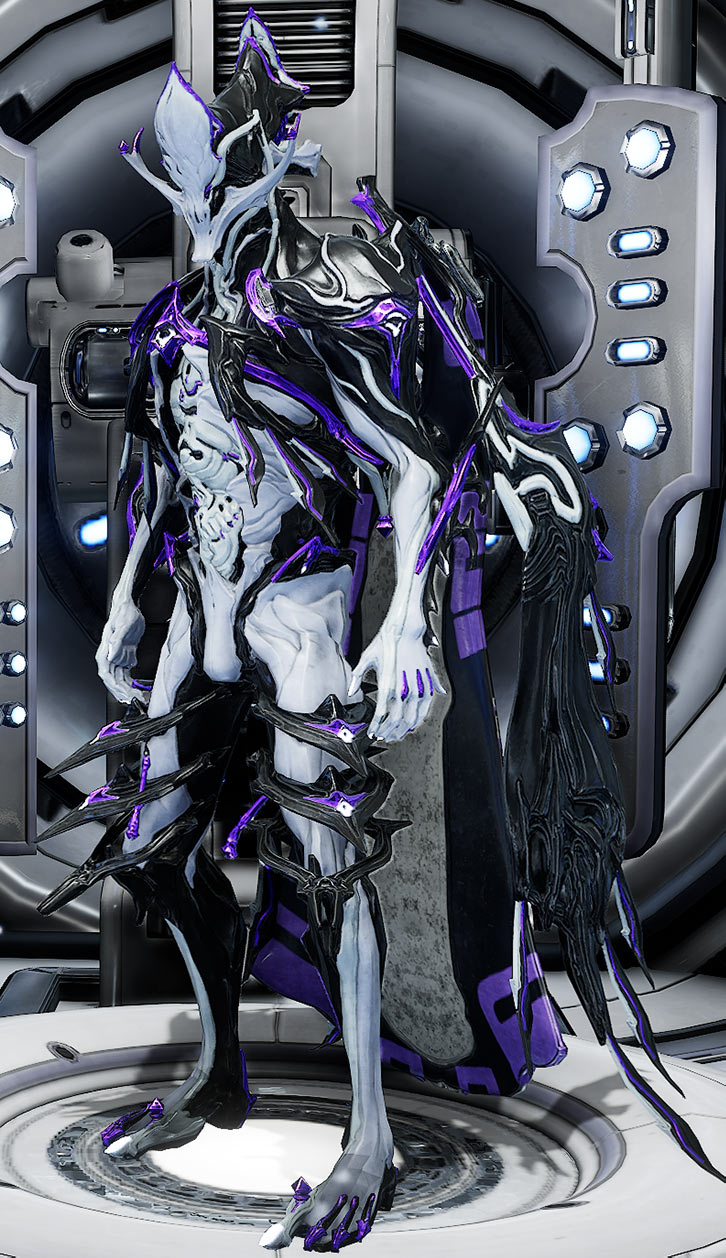 Ember was used a lot early on, and then to get the rare mods from the Hive Sabotage mission (which she excels at). I still do some Grineer or Infested exterminates with her out of nostalgia. There too a simple “fire” theme with dark industrial orange. 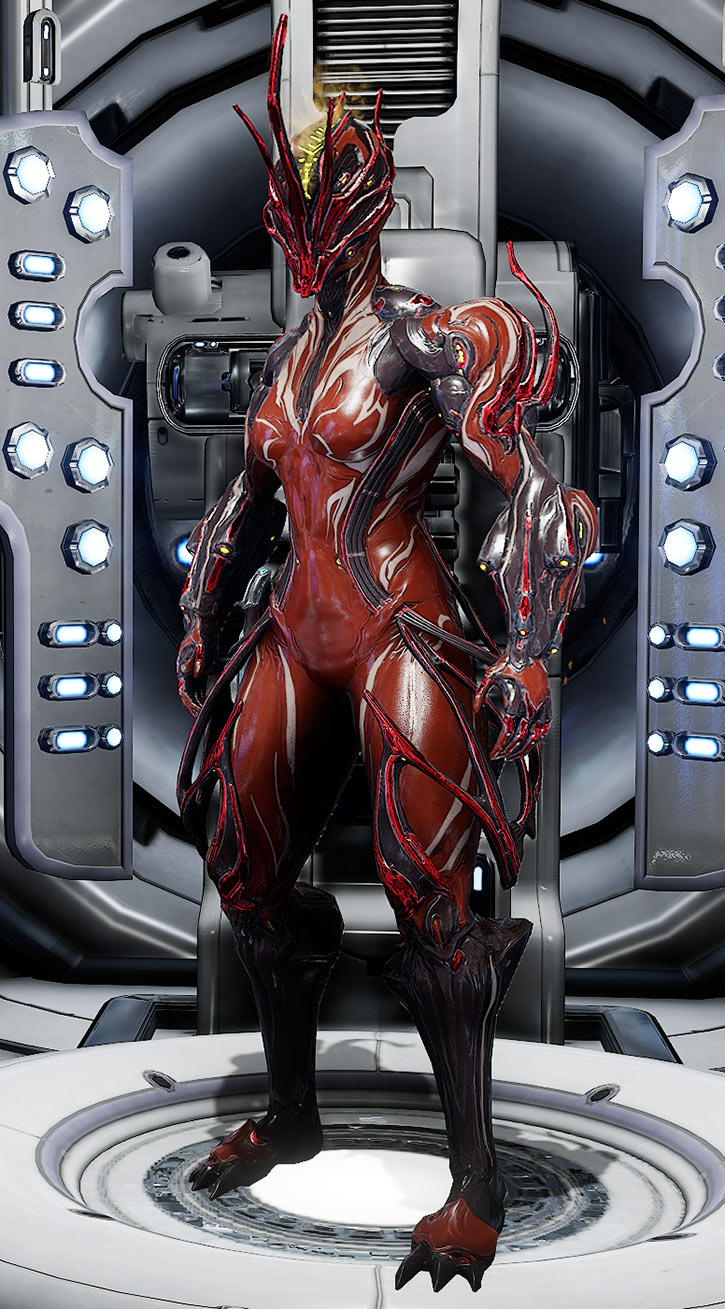 Oberon is a good generalist frame. Which is in a way a weakness, since there’s usually a specialist for the job. He chiefly saw action in Defection missions, which he makes much easier. 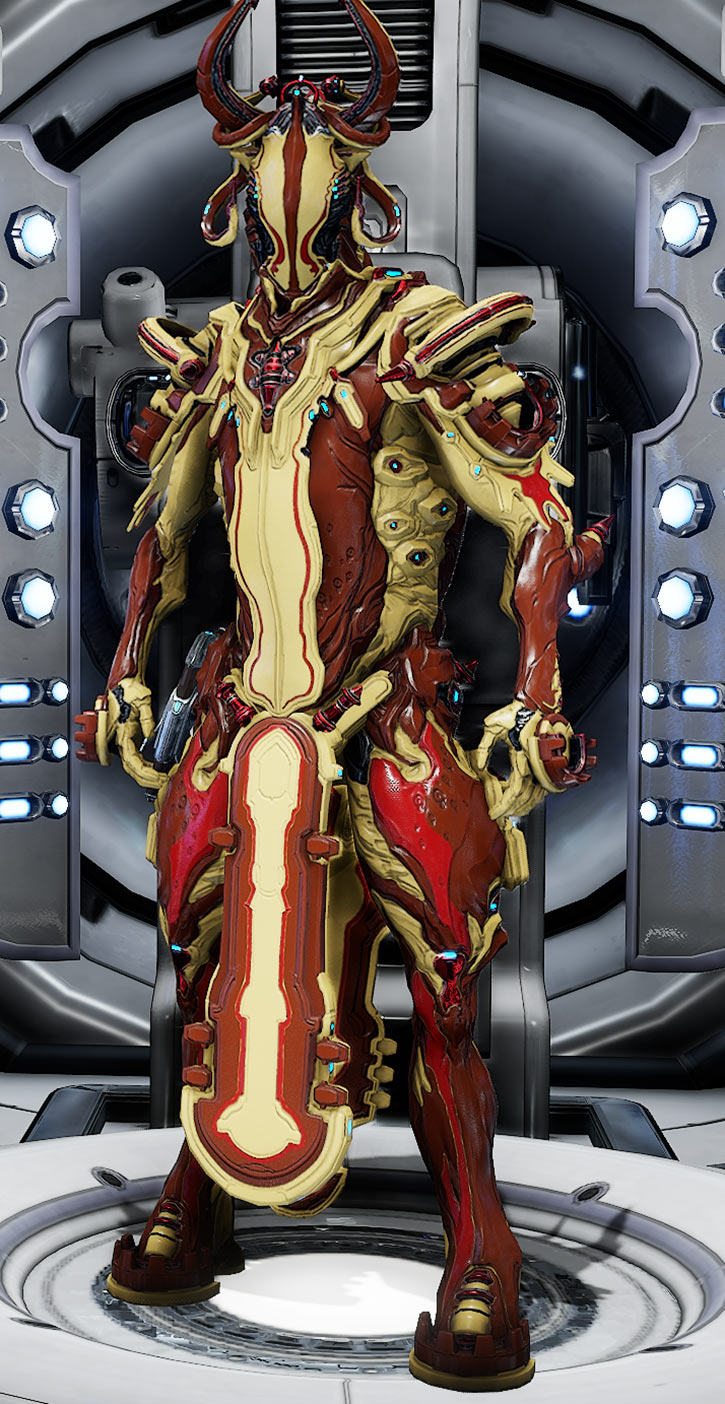 Chiefly used to run Void\Marduk missions so i can run quick, uninterrupted searches for caches, kill the robot and get out. I’ve used a low-flash, temperate cammo theme with military overtones. 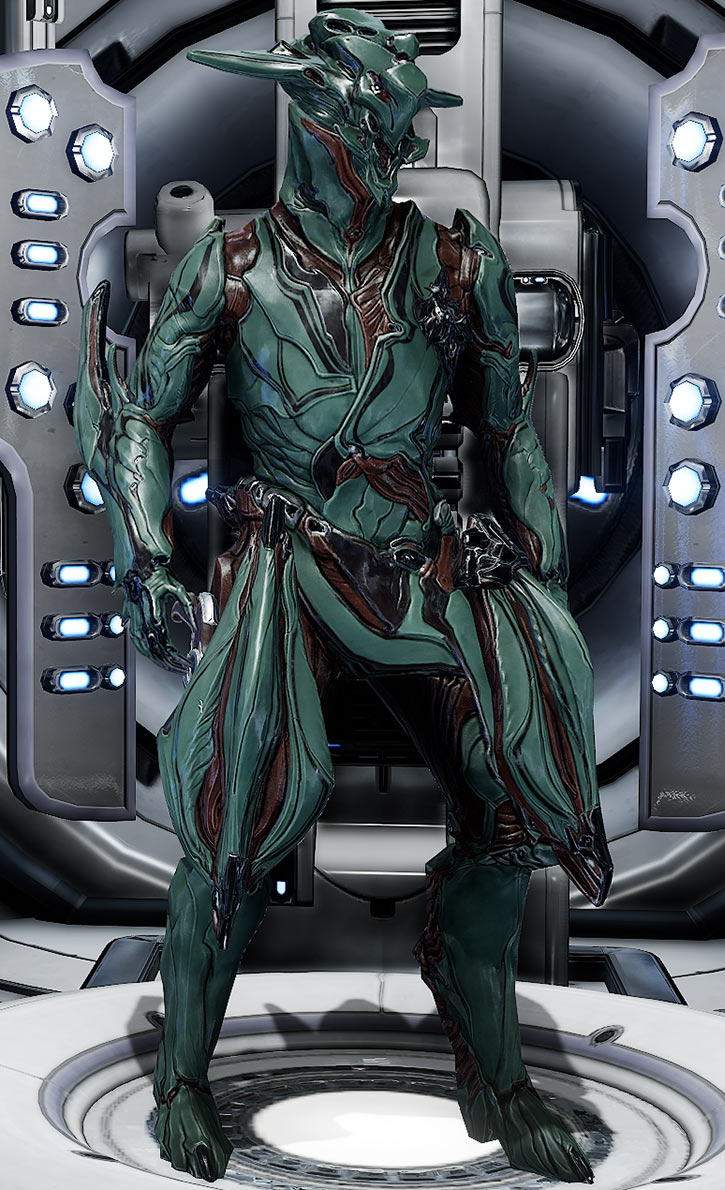 Mostly used to farm the Lua survival mission for Sentient parts. Tough, high-damage frame with simple and straighforward play (run and slash). The colour theme came from random experimentation, and I quite like it. 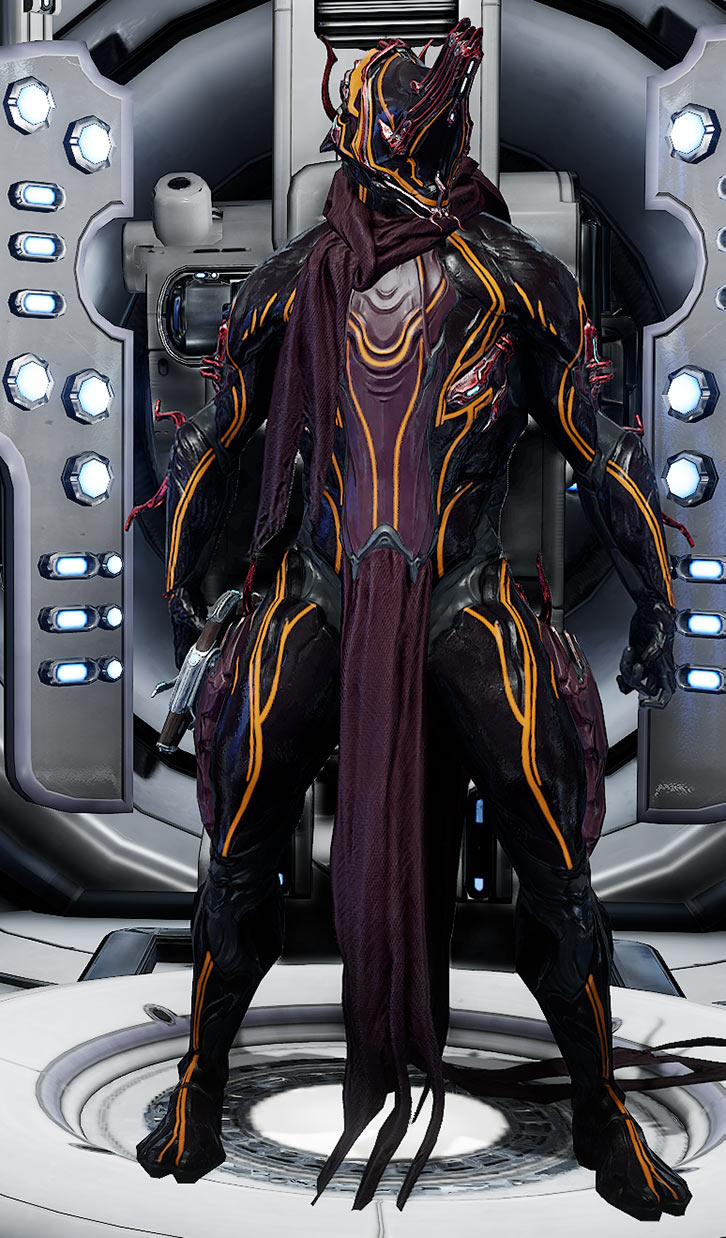 I’d love to use Trinity more, but there aren’t that many occasions where there’s so much damage she’s needed. The more common one would be a bad group when running Axi fissures, but you can’t predict that. I went with TRON-esque colours, but kept it quiet. 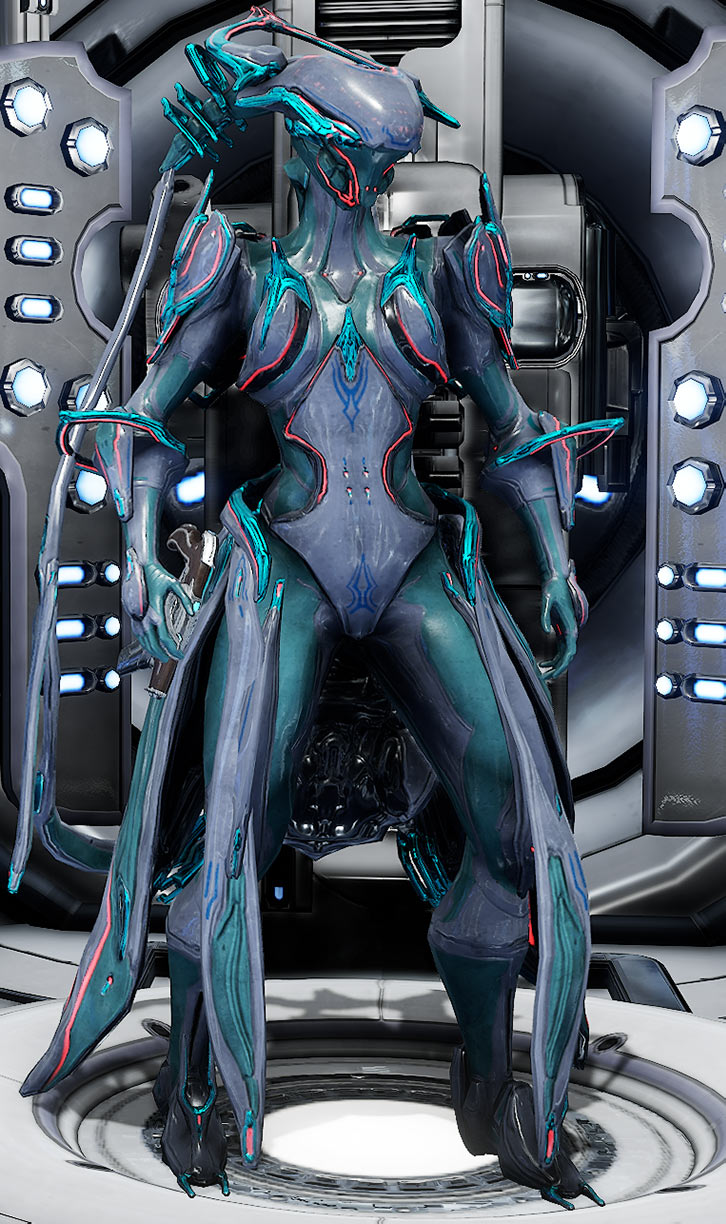 I like her, but haven’t found much time to use her. The plan is to use her to level precision weaponry (semi-auto rifles and the like), as her molecular fission makes aiming so much easier. 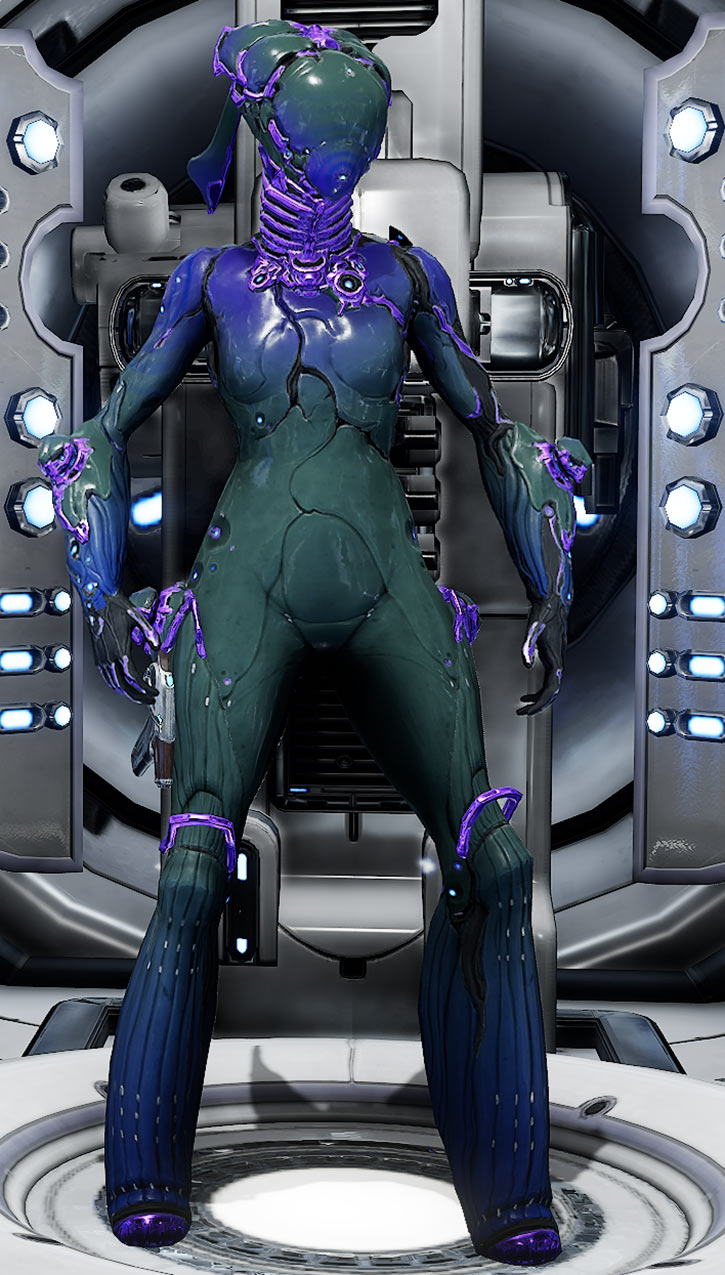 As with Titania I’m not using her much as I prefer waiting for her prime. Mostly I’ve had fun with her doing high-level Grineer spy missions and some Riven unlocks. I went for a winter cammo theme. 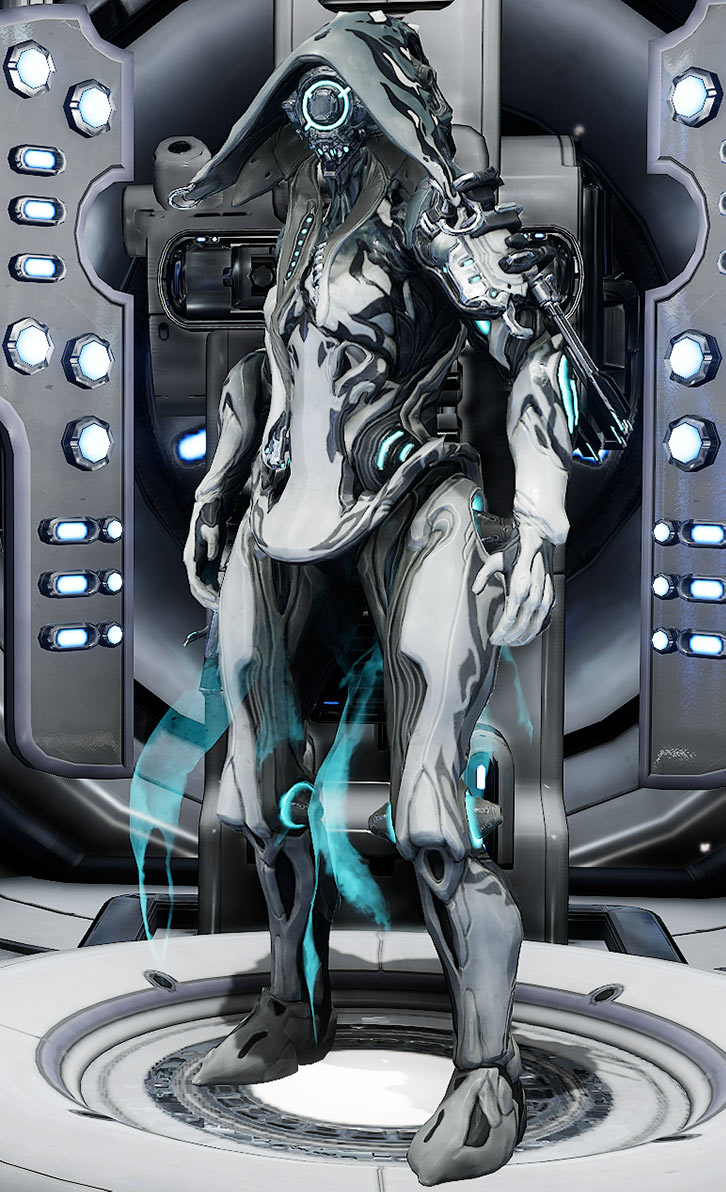 She’s difficult to use for me, so I chiefly deployed Octavia when farming for Nidus parts. 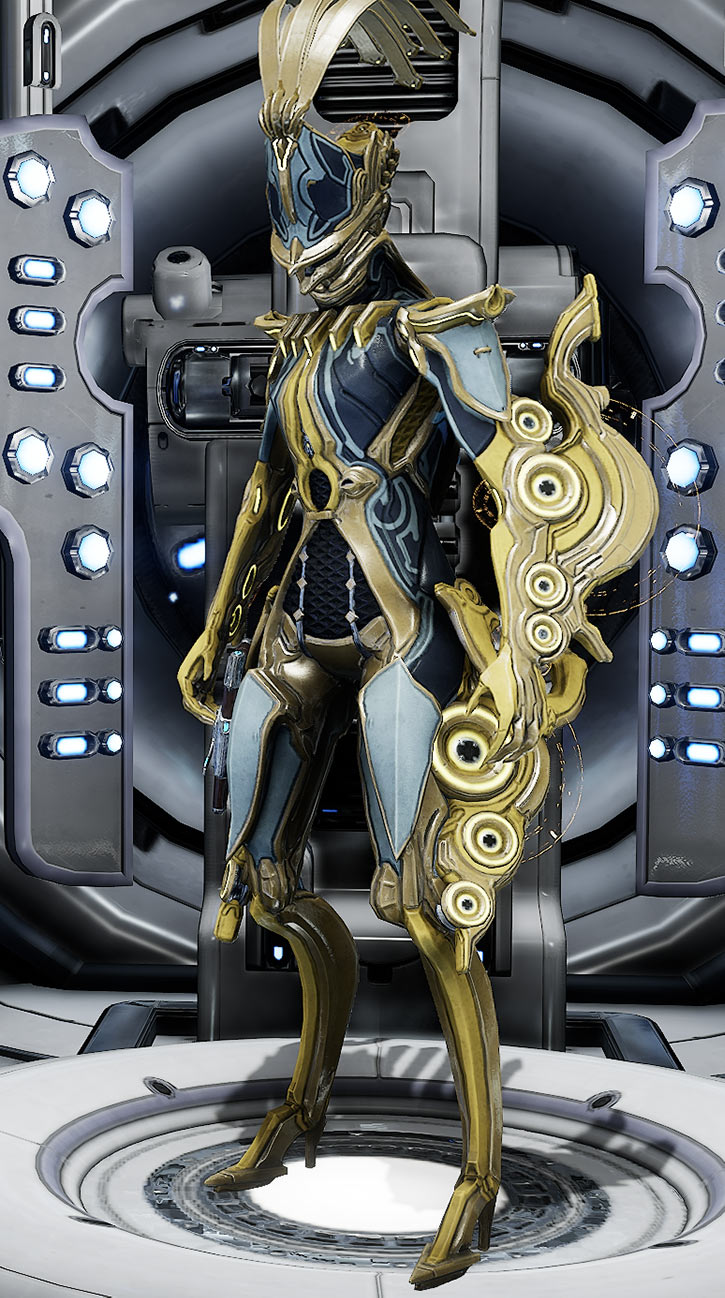 Currently levelling him. A static farming frame, so it’s hard to find him thrilling. I mostly want him around to expedite some repetitive stuff, such as farming for some stances and the Grove Specters. 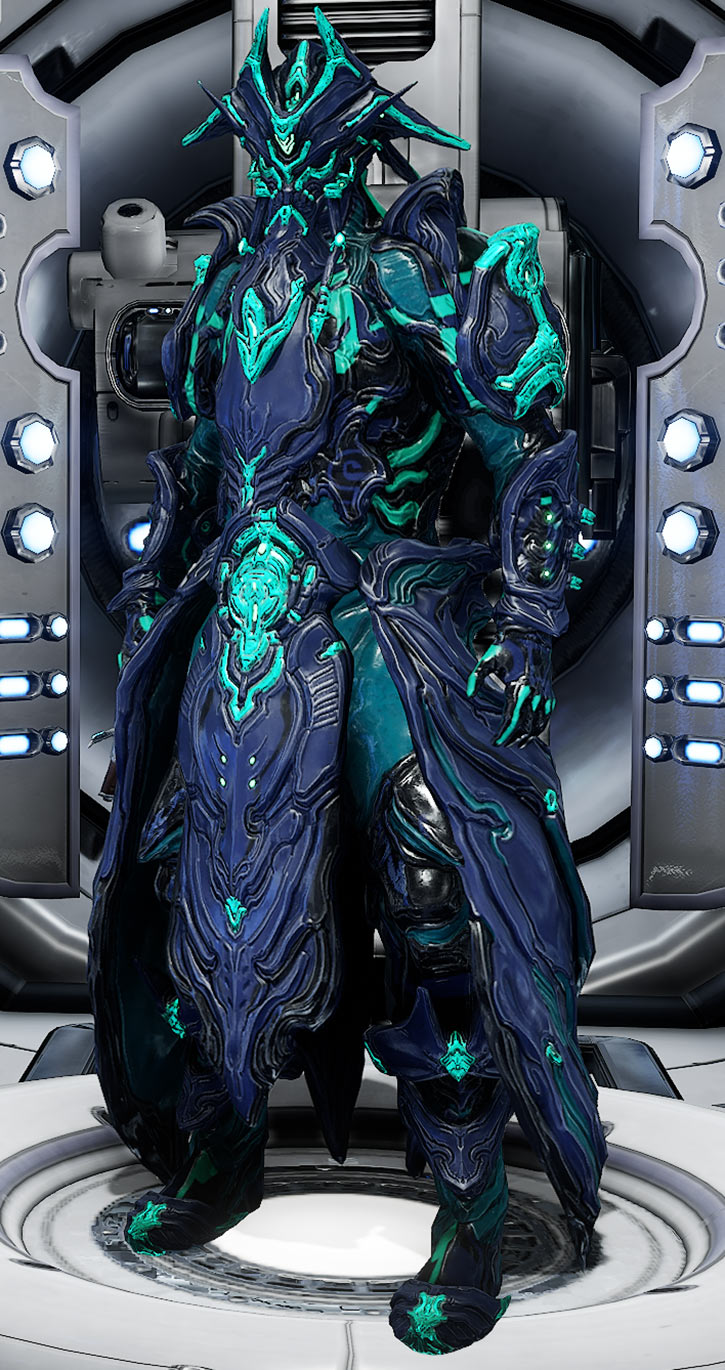 My reflexes prevent me from playing glass cannons – or speedsters. So Banshee and Gauss are the only two frames I have little interest with. Though I’ve been thinking about aim-gliding stuff for Banshee. Mostly I levelled her to cheese stealth-based mastery rank tests I’m bad at. 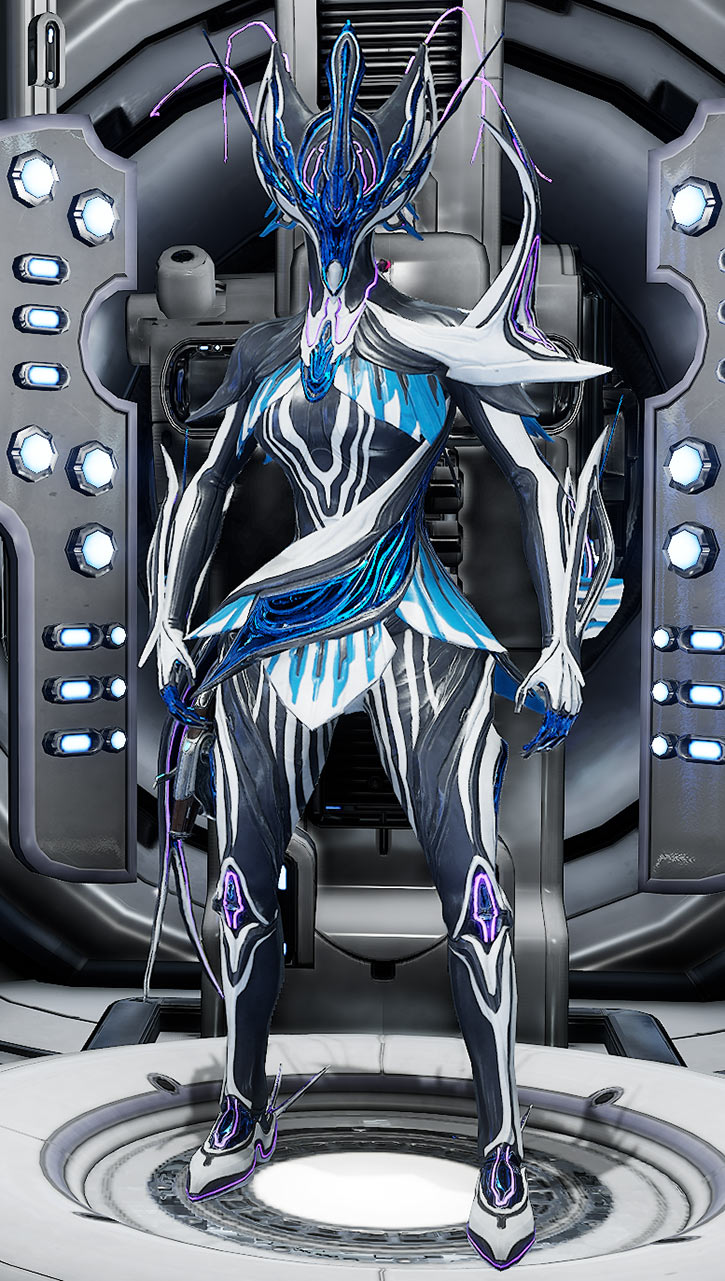 Just started her, but soon found good colours. Which means I like her even more. 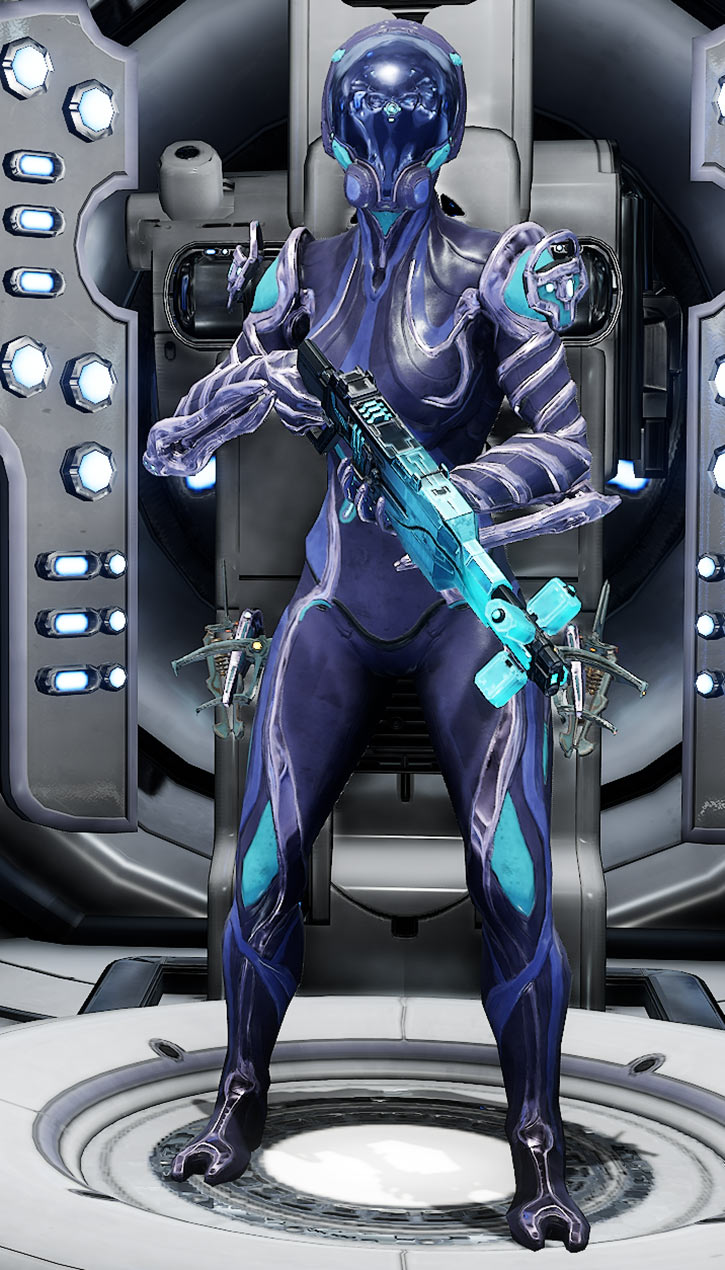