She appeared in “The Maltese CupCake,” a story which makes little sense, but was published in Adventure Comics #450.

Mr. Astor asks Wonder Woman to find the Maltese Cupcake. As WW leaves, (and while Astor listens) Petula Lorry tells WW that it is in the hands of a shady man in the “Uh-Oh” district of town.

Petula leads WW into a trap. “You were looking for a shady man ! Instead you find a big lady who throws a big shadow—HA-HA-HA-HA-HA-HO-HO-HO…And now… you’ll promise to give up the search for the Maltese Cupcake ?” asks the Fat Lady.

WW spots the Maltese Cupcake up on a shelf. She leaps up to get it, but knocks it off ; it smashes on the floor. Mr. Astor arrives with lots of Hostess™ Cupcakes. WW decides to lasso all three NPCs (as they eat the Hostess Cupcakes) and take them off to jail.

She’s really fat. Her black hair is pinned up, and she wears loose flowing purple clothes.

The Fat Lady aka the corrupt Cindy Bluestreet 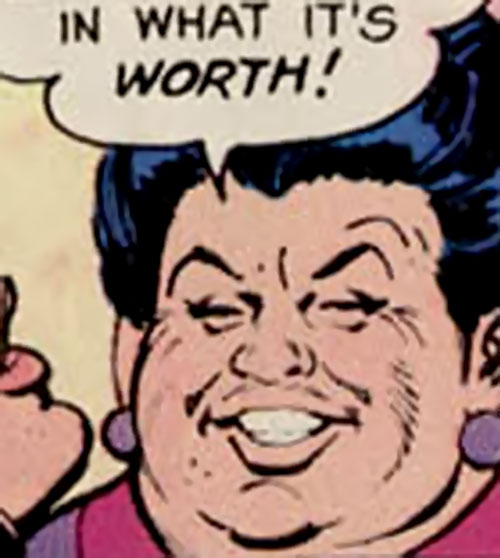