Fatality has been trained by the Warlords of Okaara. As a result, she is thus a stupendous master of armed and armed combat, and a great warrior. Her alien physiology also gives her superhuman endurance, which was in fact her main tactic against Green Lantern. She would fight them for hours while staying on the defensive, stalling until they exhaust their 24 hours charge.

Her main asset is her speed and accuracy. She’s very hard to hit, and pretty much never misses. Being extremely fast, she can easily mount a savage assault before her opponent can react.

She tends to toy with her opponents, and rarely strikes to kill (Martial Artist for EV, in DC Heroes RPG terms). Fatality prefers her targets to last. This doesn’t apply to robots and the like, though. Combined with her polearm’s armour-piercing properties, this allowed her to ambush and kill a Superman robot in but one blow.

Going for the jugular

This strike may have been helped by Fatality’s capability to see weaknesses. This ability is of unknown origin, and might be a mutation over her alien heritage. Weak zones appear highlighted to her eyes. This ability is rather weak, however. It has trouble penetrating ordinary clothes, and is unlikely to significantly help against most opponents.

She may use it just in case when ambushing someone. And she just might get lucky with it, as likely happened with that Superman robot.

Fatality has researched the Corps very well. She knew whom each of the Lanterns was (barring secret identities and the like).

After her clash with Kyle Rayner, her left arm was replaced by an artificial one made of some sort of liquid metal. It could morph  to look like her normal arm, which was the default mode.

Her Terran-made other prosthetic, though, is obviously artificial and much less advanced.

Yrra Cynril is originally from the planet Xanshi. She’s a member of one of the quasi-Human races among the numerous forms of sentient beings living there.

Her claim to fame was that, as the eldest child of a royal family with a gift for warfare, she was the first of her kind to be educated off-world. She was sent to become a student for the Warlords of Okaara. She apparently was there roughly at the same time Starfire was.

However, during Cynril’s education, Xanshii was destroyed in a tremendous explosion. Bereaved, Yrra eventually learned that the destruction was due to an error by a Green Lantern. Leaving Okaara in defiance of the Warlords, Cynril became the avenger Fatality.

She finished her education in the arts of fighting. The she started tracking down every sentient who was, or once had been, a member of the Green Lantern Corps.

Her sole goal became to eradicated the GLs just as the GLs had been responsible for the eradication of her entire world. Among other GLs she managed to kill Stel.

During her crusade, the Corps went through several crises and great upheaval. As a result, Fatality was mostly left with former Green Lanterns. On Earth, she eventually located the last bearer of a ring – Kyle Rayner. She fought him using her usual tactics. However, she retreated when she realised that Rayner’s ring didn’t work as the previous GL rings did.

Thinking she was after other Green Lanterns, Rayner flew to the rescue of John Stewart. Stewart, unbeknownst to Fatality, was actually responsible for Xanshi’s destruction. But the devious Fatality was actually still after Rayner. She tracked down and confiscated Rayner’s GL battery.

During their next clash, Fatality switched tactics and went on the offensive. She steamrolled Rayner, but he was saved by John Stewart. Still holding the battery, she fled to her starship and flew away with Green Lantern in hot pursuit.

Fatality presumably hoped that he’d run out of charge while in the void. But Rayner managed to destroy her ship and crash them both on a nearby planet before running out of juice.

Green Lantern and Fatality fought again on the alien planet, both being badly wounded. Fatality eventually triumphed, only for the pair to be attacked by a tentacled monster. Fatality refused to hand Kyle his battery, preferring for the both of them to die rather than save him.

Rayner, however, escaped from the monster. He couldn’t save Fatality – all was left of her was her left arm. Recovering his battery, he flew back home.

Yet Fatality came back, to kill John Stewart. For Rayner had been dumb enough to tell Fatality that Stewart was the man whose mistake was responsible for Xanshi’s destruction.

Cynril managed to take John, Jade and Merayn down, as well as the intervening Kyle. She then got away with Stewart in order to execute him. Jade and Rayner pursued and saved him, but Fatality again defeated Jade, took her ring away and engaged Kyle with Green Lantern energy.

Stewart intervened, manifesting a super-powerful burst of Green Lantern energy that blew Fatality away. But by the end of the battle, Stewart lost the uses of his legs. This handicap was later revealed to be somatic, a manifestation of his guilt over being unable to save Xanshi.

Fatality came back some time later, of course. This time she was wielding a Green Lantern-like making yellow constructs. This weapon was actually a prototype for the weapon that would be used by Nero. But Fatality proved less efficient with it than Nero or Rayner, who could blow through her constructs.

This defeat crushed her. Furthermore the hidden Qwardians who had given her the ring took it back explosively, blowing up her right arm. She survived the ordeal, thanks to Rayner rushing her to an hospital.

Fatality was then kept imprisoned at the Slab, a prison for metahumans. Her Earth-built right prosthetic and the alien-built left one were calibrated so she could exert no more than 10 lbs.. Attempts at psychotherapy were made, but failed due to her savage temper. Yet Stewart kept visiting her, trying to get somehow get rid of his guilt over the destruction of Xanshi.

The bitter, lonely Fatality kept provoking him. She kept Stewart’s tension gnawing at him.

On the other hand she was the one who revealed the somatic nature of Stewart’s crippled legs. She did so by using her ability to visualise weaknesses and noting that his spine was sound. Yet her sole goal was to make him whole again so she could honourably kill him when she would escape.

Fatality’s blood is purplish, which makes her intend to devour Kyle Rayner rather puzzling.

A warlike elven princess, basically. She is efficient and ruthless, and a good tactician – but also seemed to appreciate sensuality.

The later aspect might solely be due to the peculiar writing about Rayner during early career. But Fatality did go out of her way to dance with him and kiss him before she would butcher him. And she later kept sexually provoking Stewart, lamenting how much she missed physical contact while in prison.

Among her oddities, Fatality is a ritual cannibal. It is a tradition for her people to kill and eat particularly worthy opponents. However, it may be specific to her royal lineage.

Despite being a fearsome and ruthless killer, Fatality is running on teenage terror at seeing her home world destroyed and losing everything and everyone. She has been for years. When she was consistently thwarted by Green Lantern despite coming very close to her revenge, she unravelled. She felt horribly lonely and with nothing left in her empty life, and eventually collapsed in tears.

Once in prison she became quite bitter, vicious and manipulative, still clinging to her dreams of slaughtering more Green Lanterns.

“I was trained by the Warlords of Okaara. I can fight indefinitely. You can’t.”

“It’s not your sorrow I want. You think an apology could even begin to make up for genocide ? ”

“When I wake up, I forget what happened. I wonder what I feel something like gloves on my hands. Then I remember. I have no hands. I have approximately six pounds of metal and plastic and numerous fiber optic cables attaching them to my nerves ending, or so they tell me.”

Drawbacks:
SIH of Green Lanterns and former Green Lanterns, MPR (Due to royal inbreeding and genetic tampering, Fatality’s cell cannot be duplicated – she cannot have organs or limbs artificially regenerated and must use prosthetics], SPR (missing her left arms and lower right arm). 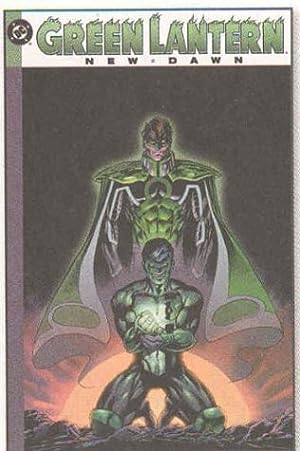 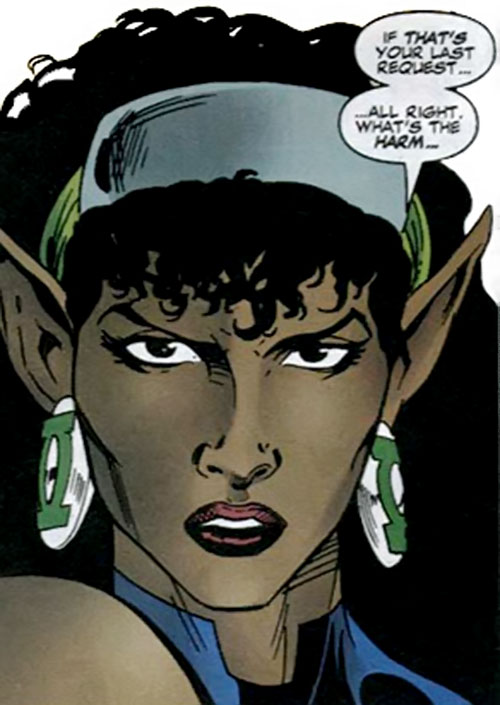 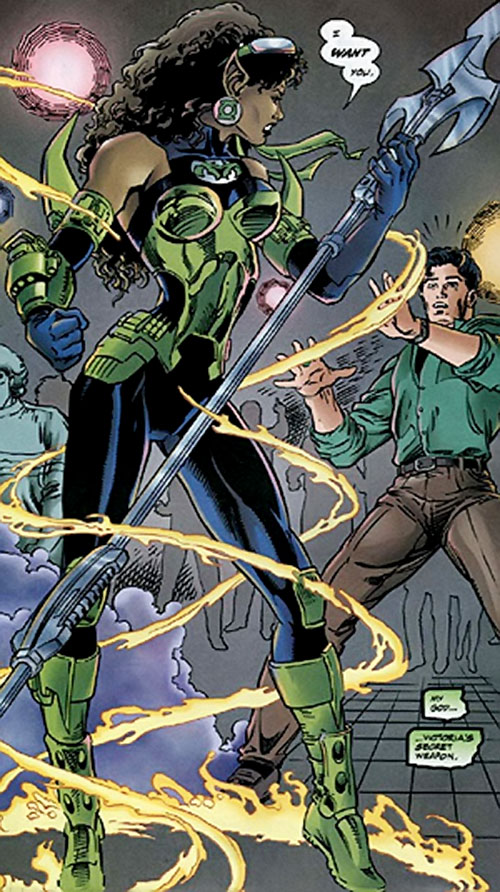 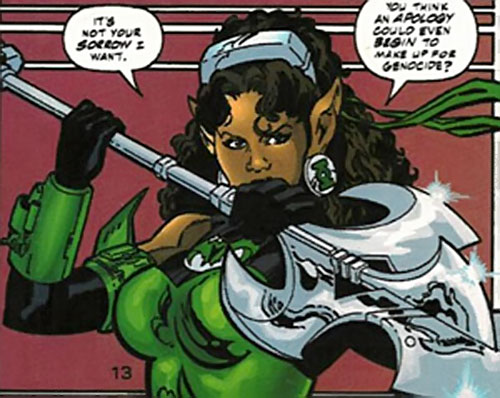 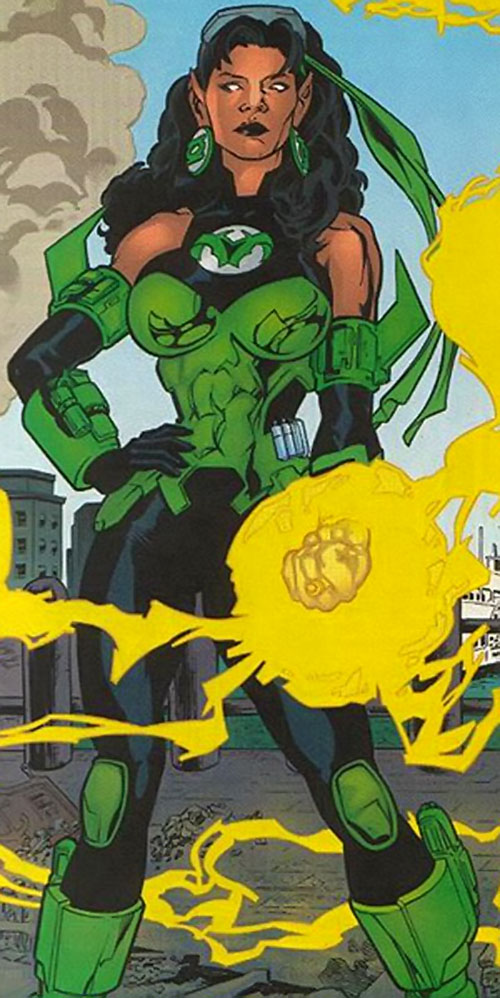 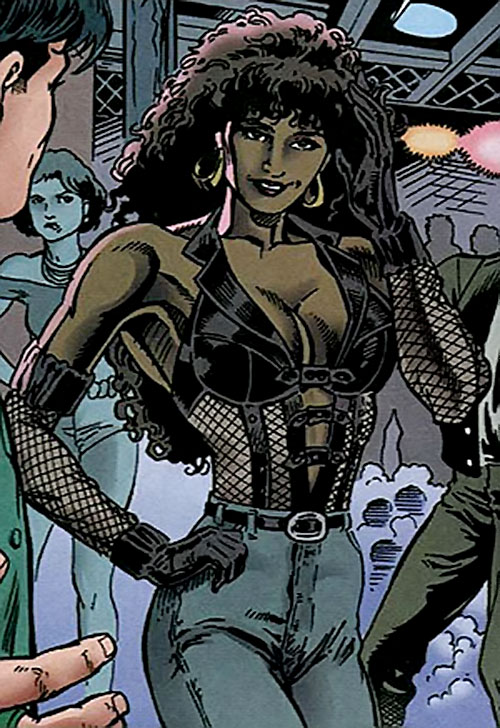