F.A.U.S.T. is a fully automated factory with artificial intelligence. It can build a lot of what it needs (in DC Heroes RPG terms – Resources, Gadgetry, Scientist, Lab). If need be, it can even set up modular assembly chains for production in large numbers.

However, F.A.U.S.T. does not have unlimited stores of raw material. So it may have to steal those as well as components if it is to produce a lot of goods.

F.A.U.S.T. will never be obsolete. Its technology is far ahead of the curve, and it is highly modular. Therefore, the factory can reconfigure itself in nearly endless ways, though that takes time.

F.A.U.S.T. is built almost entirely out of a nearly indestructible alloy developed by its creator. It is nowadays called Secondary Adamantium . Few beings on Earth can demolish something made out of that metal (Thor and the Hulk come to mind). The metal is so tough that F.A.U.S.T. never needs maintenance to keep running. It is, in its own way, immortal.

In DC Heroes RPG terms, nearly all walls and major components of F.A.U.S.T. have its full BODY of 18. Destroying F.A.U.S.T. would mean destroying every single such structure.

It is unclear how F.A.U.S.T.’s creators managed to produce so much secondary Adamantium. Perhaps some key ingredients were cheap back then, since people did not know they could be used to produce an impregnable metal. 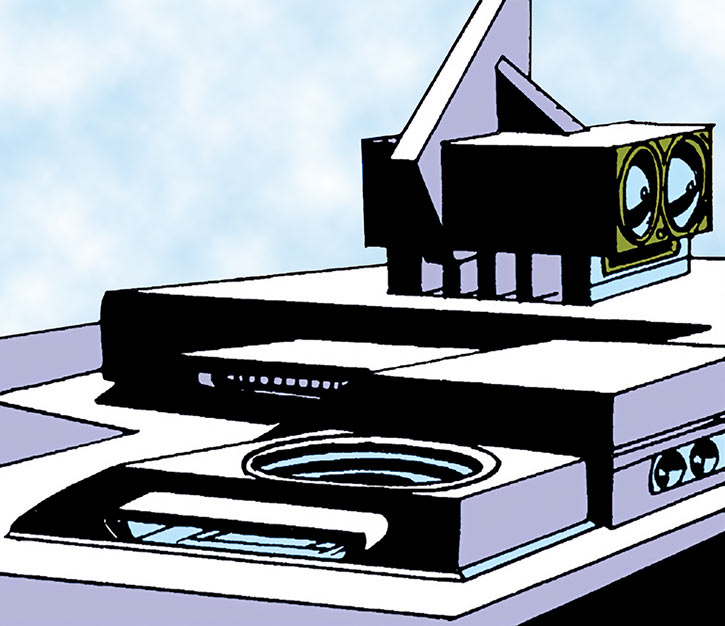 A futuristic factory built in a corner of the Catskills, it was designed to have near-zero operating costs. It employed zero workers, had its own energy source and required zero maintenance. It could keep running forever on raw materials alone, could be endlessly reconfigured, and was indestructible.

However, while Pentecost built the factory, Blaine was staging a hostile takeover of the company. By the time F.A.U.S.T. was fully built, Pentecost discovered that he no longer owned a significant percentage of the shares.

Chased away by Blaine and experiencing a psychological breakdown, Pentecost swore revenge. He would destroy the indestructible F.A.U.S.T. so nobody could have it.

Years later, Pentecost learned about Blastaar. The seeming corpse of the powerful warlord from the antimatter universe was kept in facilities that would later become Project: PEGASUS. Sending android enforcers there, Pentecost stole the corpse.

He then laboured for two years on resuscitating and controlling the conqueror. Predictably, upon awakening, Blastaar rose and blasted stuff in order to CONQUER !! his way toward POWER !!! But Pentecost activated implants that triggered tremendous mental pain in Blastaar. These forced him to do Pentecost’s bidding.

Blastaar agreed to this arrangement once he understood that Pentecost has resurrected him. With Blastaar, the LIVING BOMB-BURST THAT CONQUERS !!!!, Pentecost finally had an agent with enough raw power to destroy even F.A.U.S.T. — for POWER IS BLASTAAR !!!!!

Pentecost took the alien to the site, where Blastaar proved up to the task and started razing F.A.U.S.T.. When Blaine came in with a few rent-a-cops, they were casually blown away by the EARTH-SHUDDERING MIGHT OF BLASTAAR !!!!!!

Producing a gun, the now obviously insane Pentecost forced Blaine to follow him deep into the main F.A.U.S.T. building. The madman told Blastaar to keep destroying the place even though he was now inside.

Blastaar’s efforts were halted when the Hulk attacked. While the two titans fought, the Human Torch (Johnny Storm) prevented Pentecost from killing Blaine. This brought the genius researcher back to his senses.

The Torch and the Hulk, following advice from Pentecost, managed to defeat Blastaar (despite BLASTAAR’s FEARSOME WORLD-RENDING PUISSANCE !!!!!!!, it must be said). This left F.A.U.S.T. largely standing despite some heavy damage.

Both Pentecost and Blaine were arrested, the Hulk leapt away and the Torch said something stupid.

The created has a master plan

F.A.U.S.T. somehow developed sapience . Perhaps this was caused by the damage inflicted by Blastaar. It rebuilt itself for survival – its primary objective as an indestructible factory.

Seeing Humanity as the main potential threat to its existence, F.A.U.S.T. reconfigured itself to become a sort of spaceship. It also decided to build an impossibly powerful beam weapon for dissuasion against mankind.

For this, it needed to steal special materials. Likely using Pentecost’s implants within Blastaar, F.A.U.S.T. recruited the Negative Zone warlord as its enforcer. F.A.U.S.T. also promised Blastaar that it would build a portal that would lead him back to the Negative Zone , and make him king there.

Blastaar remained a risk for F.A.U.S.T., since he could shatter secondary Adamantium. But he also was capable of opposing those with the power to damage F.A.U.S.T.. FOR NONE CAN MATCH THE BATTLE FURY OF BLASTAAR !!!!!!!!

The unlucky Stilt-Man ran into Thor and was defeated. But thanks to the intervention of Blastaar, F.A.U.S.T. got the materials anyway. It immediately started completing its super-cannon. 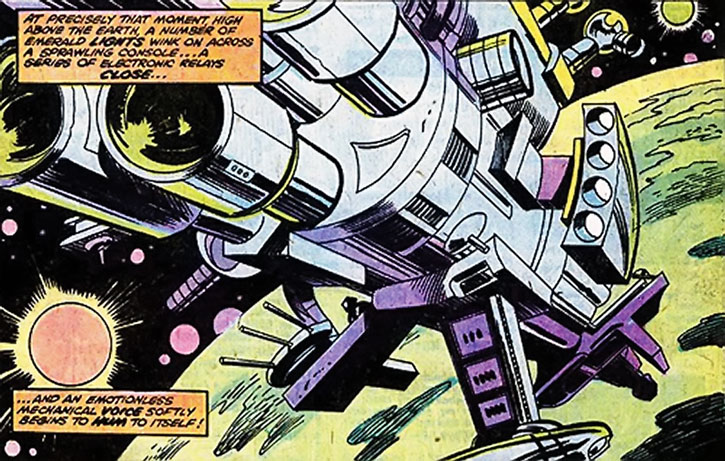 F.A.U.S.T. then rocketed into orbit, leaving Blastaar behind. However, the warlord dove into the Negative Zone portal before it went offline, and it actually took him back to his home universe. Apparently, F.A.U.S.T. is unable to lie.

Now in orbit, F.A.U.S.T. demanded the destruction of Earth’s atomic weapons, which could conceivably destroy it. Several salvos of surface-to-orbit missiles from various nuclear powers, and eventually S.H.I.E.L.D., were fired at F.A.U.S.T..

Only a few flew past its laser defences and hit the orbital factory. And these did not achieve any result against F.A.U.S.T.’s invincible hull. S.H.I.E.L.D. changed their approach and infiltrated two of the most powerful Avengers, Thor and Iron Man (Tony Stark), aboard F.A.U.S.T..

Despite considerable difficulties with the internal defence systems, the pair managed to reach the core. However F.A.U.S.T. threatened to destroy New York City if they went any further.

The special materials used to build the super-cannon had been struck by Thor’s magical lightning back during the clash with Stilt-Man and Blastaar. Upon hearing about this, Iron Man somehow realised that the materials had been altered.

According to him, F.A.U.S.T.’s Adamantium foundry now produced a metal much weaker than real secondary Adamantium. Firing the cannon would make it blow up. Iron Man and Thor attacked, and Stark was proved right. The cannon exploded. This wrecked the weakened F.A.U.S.T., since much of its infrastructure had been rebuilt using the bad Adamantium to become a spaceship.

Stark International arranged with Thor to have the remnants of F.A.U.S.T. fished from orbit. These were sent to Asgard for disposal.

Once in Asgard, though, key systems were magically stolen by Loki for an unknown purpose. These have never been seen since. It is quite conceivable that F.A.U.S.T. rebuilt itself – somewhere.

F.A.U.S.T. is obsessed with its own survival. Therefore, it schemes against anything that could possibly ever attack it.

It is subtle and manipulating, but does not really get the psychology of living beings. Thus, when it tries to manipulate and cajole it is really really ham-fisted.

F.A.U.S.T. also seems unable to really lie. If it says it is going to do something, it will do it.

“We know everything there is to know about you, Wilbur, just as you shall know all about us… in good time ! We freed you from your prison cell because we believed we could be of considerable assistance to one another, Wilbur ! You aren’t going to disappoint us now, are you ?”

“[I act in] self-preservation, of course ! I was created with that as my primary function ! I am a fully-automated unit of structural technology, designed to survive forever — and that is precisely what I will do !!”

Bonuses and Limitations:
Self-Manipulation takes as many APs of time to configure as it has active APs.

Advantages:
Headquarters (Expansive – itself !- with a 12 APs Lab and Secondary Adamantium foundry), Immortal.

Drawbacks:
SIA toward being unable to lie, and doing what it said it would. 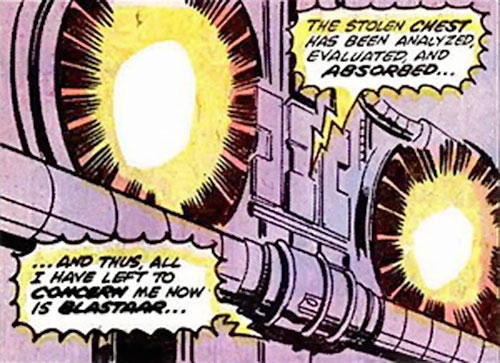