Fei Long is a relatively early character in the huge series of Street Fighter video game. He appeared in 1993.

He intensely is a Bruce Lee knock off. He’s so Bruce Lee that even Bruce Lee’s mum can’t always tell them apart.

His name (飛龍 — “Flying dragon”) likely alludes to Bruce Lee having been credited as Lee Siu-Long (“Lee the little dragon”) in early movies.

As such he could make a welcome addition to any martial arts campaign.

Fei Long is one of the most renowned martial artists. He featured in many Hong Kong action movies.

Beyond his great skill, he can use his chiA sort of universal life force/energy in Chinese-influenced cultures. to cause his limbs to burst into flames when he strikes an opponent. That and he hits really hard really fast.

As seen in his movies, he is able to mop the floor with a lot of mooks in short order.

In the video games, he’s best used aggressively – to capitalize on his speed and combos.

His power is decent and he hits for reasonable damage, but stringing combos together is how you capitalize on Fei Long’s damage output.

His aggressive style can be described as “bob and weave”. He has plenty of techniques to close the distance where he works best. His solid pokes and wake up moves excel at harassing opponents and keeping them on their toes.

That said, Fei Long has very poor long-range game. He therefore can be at a disadvantage when fighting characters that have projectiles and long-range moves. 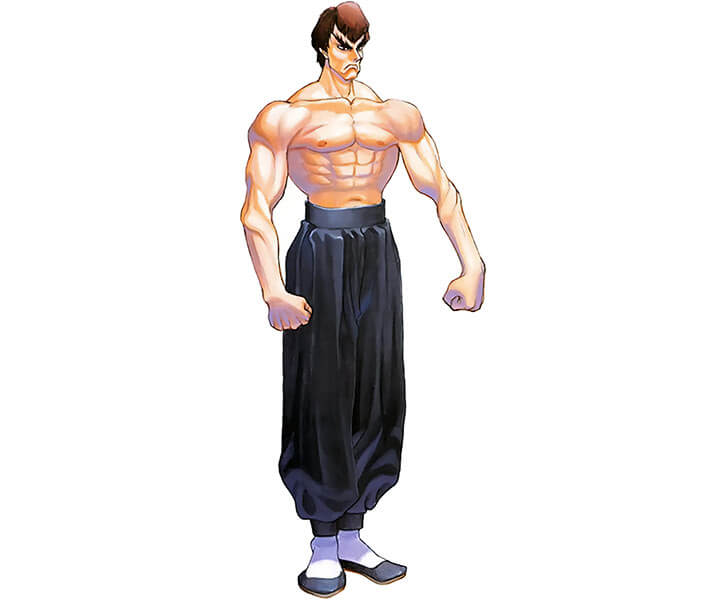 Fei Long started training in Kung Fu at the tender age of six. From a young age it was obvious to all around him that he was a martial prodigy.

Like his real-world equivalent, Long was always getting into trouble and picking street fights. That was to hone his skills.

One fateful day a famous Hong Kong director happened to be one of the spectators. After the director witnessed Fei Long pummel an opponent, he decided that the youth had all the makings of a future star.

The director was soon proved right.

He isn’t a playable character in this game. But he can be seen in the background of Dan Hibiki’s Hong Kong stage.

It seemed that fame and fortune didn’t really take the street out of Fei. He became notorious for sneaking off his movie sets to street fight. 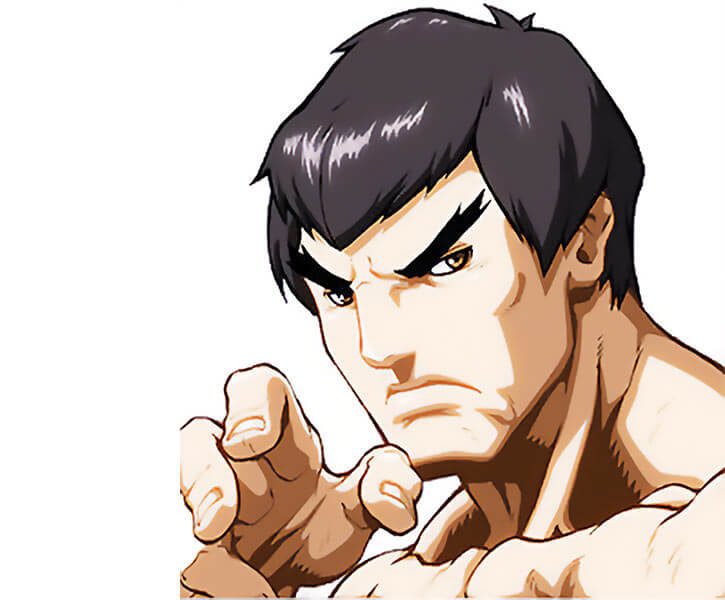 Fei Long made his actual debut in SFα3.

But he was generally thought of as a lower tiered character. Therefore, he likely didn’t advance too far in the tournament.

His contemporary movie, Street Supreme King, was a huge hit.

After fighting in the SFZ3 tournament, Fei Long realized that being a movie star was not his calling, after all. It was real fighting that truly mattered, not just acting.

He gave up his movie career, and mostly disappeared from public view.

Fei Long received an invitation to SF2 where his first battle was at his SSF2 stage, and went on from there.

Fei Long went on a quest to avenge his costars and stage hands. These had been thrashed by Shadaloo thugs.

Long eventually returned to his movie set to finish up the film. But Abel tracked him down to pass along some more info about S.I.N..

What happened after that is undocumented. But the two likely went on an adventure together.

Fei isn’t a playable character. But he is shown to be in contact with newcomer Rashid on SNS.

Likely still making movies and getting into street fights on the side.

As of this writing, there’s been no official announcement to him being playable in any future games. 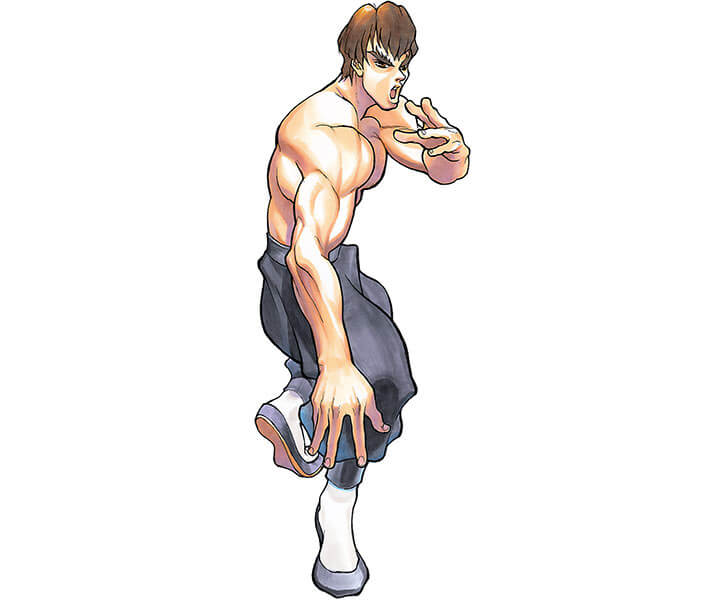 Think of an animé version of Bruce Lee who could cause his limbs to burst into flames.

Although admittedly he’s probably not quite as impressive as the original. 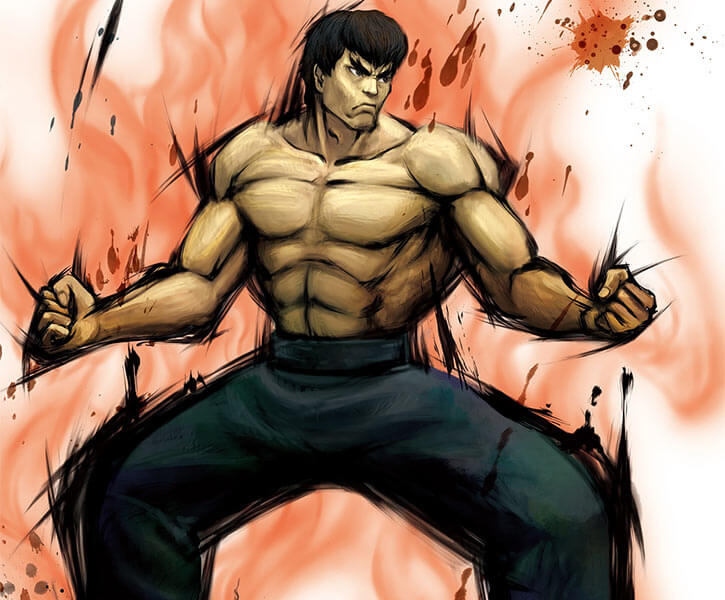 HE’S BRUCE LEE !!! Did we mention that he’s a Bruce Lee expyFictional character heavily based on another character ? 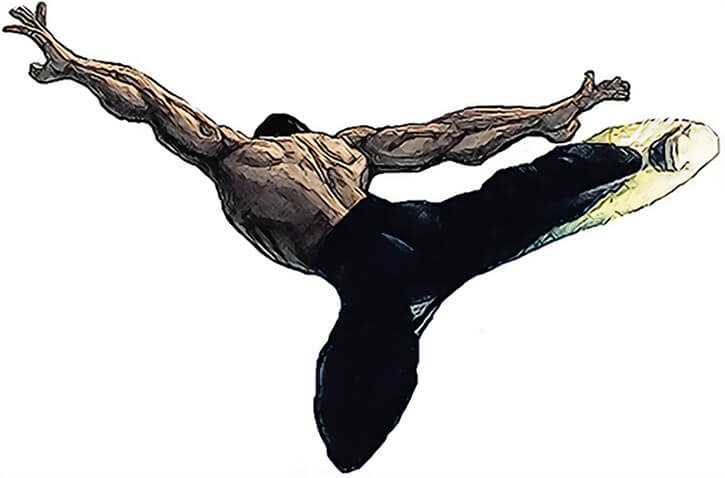 “I thought you understood. What I want to do is not acting, it’s real fighting.” 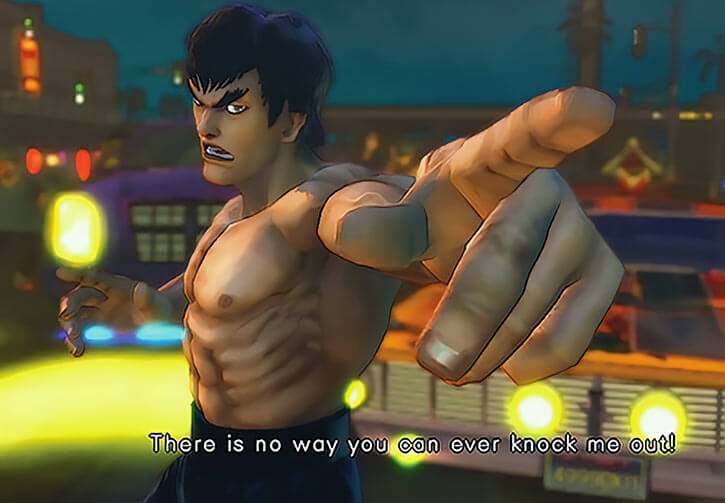