Vasquez (no relation) has had her musculature chemically enhanced. This makes her superhumanly strong and durable for her frame, and abnormally fast. She capitalizes on those asset by being a solid hand-to-hand combatant and having the training to perform superior athletics and acrobatics.

While her strength and constitution are very high for a 130lbs, 5’7” person, she is definitely not as strong as Captain America.

It is possible that Fer-de-Lance’s skin and muscle are robust enough to resist penetration from small calibre bullets and common knives. However, she has been taken down by sufficiently powerful blows.

More generally, whereas Fer-de-Lance reportedly possesses superior prowess, she has been quite easy to defeat during her appearances. This is true even during episodes where the Society are not treated as jobbers . In game terms, we have been conservative but most of the effect is produced by low Hero Points  and drawbacks representing poor luck.

Fer-de-Lance is a second generation Society member. For these guys, secondary sources  are considered near-primary  since they were written by the creator of the character. Had the stats been based solely on primary sources as usual, the’d be noticeably lower.

She wears two retractable 8” omnium steel razor-edged claws in forearms sheaths. These are very similar in design to Bushmaster’s. Some reports indicate that she also has two spring-loaded 3” omnium steel spikes in her boots. The springs ejecting the blade are powerful enough to impale a man.

Though omnium steel is usually depicted as being quite tough, Fer-de-Lance’s claws can be broken without massive superhuman strength. Perhaps this is because of the narrow design of the blade.

Fer-de-Lance was reportedly born in Puerto Rico. She reportedly worked as a mercenary and assassin in the Latin American underworld, apparently with some contacts with international terrorist the Viper.

The name “Fer de lance” means spear’s head in French. This species of snake was presumably named that way due to the shape of their head.

Fer de Lance was part of a team of mercenaries the Viper assembled – along with Puff Adder, Copperhead and Black Racer. Sometimes called the fourth Serpent Squad, this team attacked a series of casinos in spectacular, bloody heists. A significant part of the bodycount was created by Fer-de-Lance.

Due to silent alarms, one such attack in Las Vegas went sour. The Squad found itself faced with a lot of LVPD cops. The standoff was broken when the Captain (Steve Rogers) and his allies Nomad II, the Falcon and D-Man attacked from above. Fer de Lance was handily defeated by the Captain.

However, the Viper wasn’t that interested in the loot from their heists. The real goal was to have her agents recruited by the Serpent Society in order to infiltrate it. This worked – Sidewinder teleported in the Las Vegas jail they were in and offered to recruit them.

The Captain and his friends had been arrested too, though, and interfered. Fer de Lance only made it out when Sidewinder bluffed that he would kill her if Cap didn’t release his hold on him. 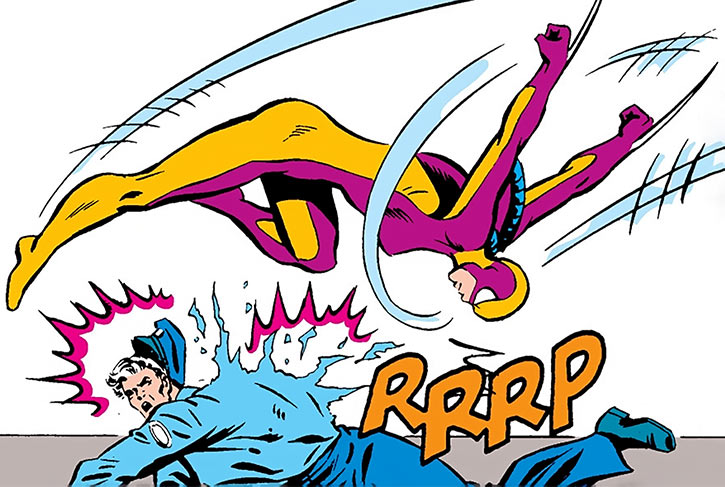 True to her name, Fer-de-Lance was the point woman for the next part of the Viper’s plan. Vasquez deployed a beacon to allow her boss to teleport in. Fer-de-Lance had learned who among the Society women was sleeping with Sidewinder, and helped the Viper disguise herself as Black Mamba to ambush the Society’s boss.

Sidewinder barely escaped and was saved by Diamondback, but the Viper’s agents (joined by a number of turncoats) took over. Fer-de-Lance attempted to stop Diamondback and Sidewinder. But Diamondback used her momentum to make her strike electrical cables with her claws, taking her out.

The scheme eventually failed. But Sidewinder eventually left and Cobra took over, letting the former agents of the Viper join. Fer-de-Lance was among those probationary members. One of the first big contracts was offered to the Cobra by Llyra and Ghaur, who wanted to recover the Serpent Crown.

Along with Diamondback and Copperhead III, Fer-de-Lance was sent to recover a bejewelled cro-magnon skull held by the repugnant sorcerer Mr. Jip. But a mystical booby trap incapacitated them before they could take more than a few steps in Jip’s creepy place.

Fer de Lance remained a part of the Society for years. During the Diamondback trial, she voted for her to die.

A day or two after that, she and Cottonmouth were attacked by Captain America as he rescued Diamondback. Fer de Lance had little opportunity to take her revenge, however, as Cap easily handled her and her fellow snake. Rogers broke off her claws with his shield. Along with many Society members, Vasquez was taken by Guardsmen and sent to the Vaults prison.

Months later, the Society got out of prison. They launched various operations to replenish their coffers, among them a hold-up conducted by Fer de Lance and Rock Python. They were defeated by Jack Flag, though – who blinded Fer de Lance with flares, then took her out with knockout gas.

Jack Flag then convinced the Society that he did this to join them. Thus, he infiltrated them for a while. He and Free Spirit then attempted to arrest them, though they were unable to do so until Force Works came in and finished the fight.

The Society was not seen for some time – presumably all or most were in prison. They eventually resumed operations, though.

The reassembled Society resumed operations by capturing Captain American and Diamondback to avenge past defeats, with Puff Adder leading the kidnapping. This was a mistake. Cap proved to be even more unstoppable than before, and “Diamondback”, unknown even to herself, turned out to be a souped-up LMD . The entire Society was soundly thrashed.

Along with a few other Serpents and lots of minor super-villains, Fer-de-Lance was seen at a Bar With No Name in Manhattan. A brawl with a visiting Spider-Man erupted, but the bartender almost immediately put an end to it.

Fer-de-Lance reappeared quite recently (early 2009) in the wake of he Skrull invasion. A number of current and former Serpent Society members had banded together and seemed shellshocked. Presumably they had had harrowing experiences caused by the Skrulls during the war.

Led by Copperhead, the beleaguered Serpents (Fer-de-Lance, Sidewinder II, Anaconda, Black Mamba, Death Adder II) took a farming community in Ohio hostage. Apparently, they intended to live off the land as warlords. They had become paranoid and were expecting random people to turn out to be Skrulls at any moment.

While the FBI’s Hostage Rescue Team was trying to find a way to defuse the situation, Richard Rider (aka Nova) and his new Nova Corp flew in at hypersonic speed. They neutralised all Serpents before they could react, with Qubit flattening Fer-de-Lance.

Fer-de-Lance is a Puerto Rican female with a ochre and violet costume that covers all but her lower face. She often wears her long hair as two tails tied together.

Fer-de-Lance is a brutal killer, with a volatile temper. She’s aggressive, abrasive and don’t like nobody, not even her allies. She’ll rail about those habits of theirs that she doesn’t like.

She’s reasonably sharp, though. She speaks in a sort of Spanglish.

However, Fer-de-Lance is not all violence, all the time. Being vicious, she likes dastardly plans that rely on subterfuge, as long as it makes her feel smarter than anybody else.

For some reason, Fer-de-Lance considers she cannot fight effectively without her claws – at least against costumed and superhuman opponents. She also has a tendency to hesitate and have no clear idea of what to do when fights have manifestly turned against her.

(To Black Racer) “For someone who doesn’t have a mouth-hole, you sure move your lips a lot, chica.”

“Okay, sabelotodo, you call the guards on us while we weren’t looking ?”

Bonuses and Limitations:
Both Powers are Contingent on STR.

Bonuses and Limitations:
Evasion is Subvelocity Ranged Only, *and* requires her to have her CLAWS ready. 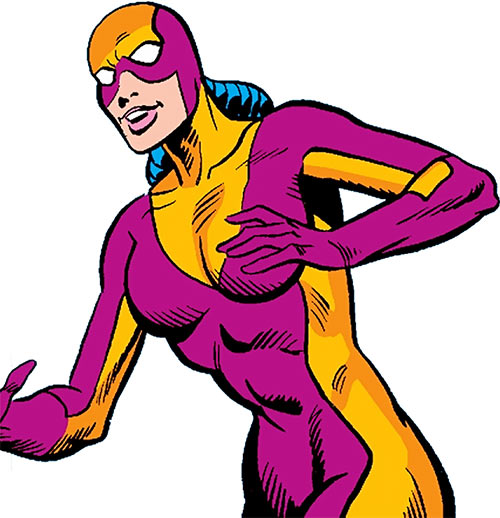 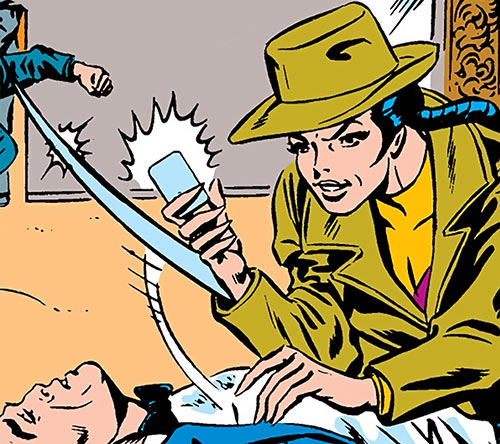 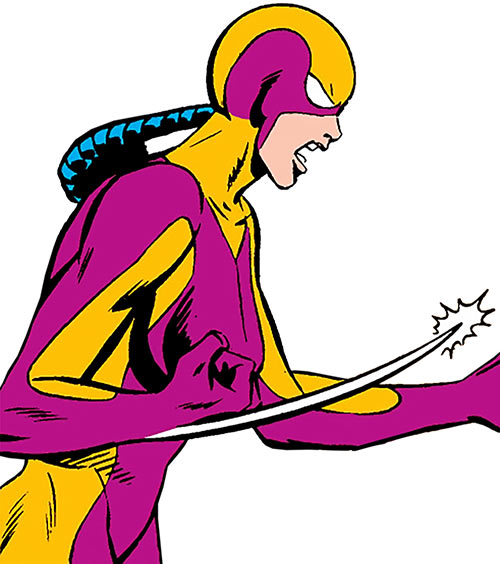