Ferro’s mutant ability allows him to transform his entire body into living iron. He thus gains its density and strength.

Broadway star Nancy Nolan received a nasty shock when her two sons were born. Their faces were so badly deformed, she could hardly bear to look at them. She left them in the care of a scientist named Doc 30, who she didn’t know was an abusive thief. She seldom thought about them again.

But the boys grew up and didn’t forget their mother. Andrew broke out of the institution. He spent time in shelters and on the streets with homeless friends such as his buddy Frank.

When the Sun-Eater threatened to end all life on Earth in the late 20th century, Andrew decided he couldn’t die without seeing his mother one last time.

While in the institution, Andrew had discovered that his freakishness was part of a greater mutation. He had the power to turn his body to iron.

When Nancy staged a free show to lift people’s spirits during the Sun-Eater’s attack, Andrew made his way to the theater. He confronted her…only seconds before the roof caved in.

Andrew, using his powers, saved his mother, and, with Superman’s guidance, saved and helped others. He felt like a hero and a human being for the first time in his life.

Andrew, adopting the alias Ferro, was introduced to other heroes who were fighting the Sun-Eater. These included the Legion of Super-Heroes. One Legionnaire, Spark, lent him her flight ring so he could help more people.

As he helped try to control the disaster, he came up with the idea of destroying the Sun-Eater with a bomb, which he would deliver.

The scientists fighting the Sun-Eater were unable to devise such a bomb. But they did come up with a plan that involved someone being in a spaceship to deploy special devices. That person would have to risk fiery death in a supernova.

Superman said he’d do it. But Andrew decided that Superman meant too much to Earth to possibly risk his life, and that he would go instead. He snuck aboard the ship. Nolan was going to die fighting the Sun-Eater, but he was rescued by Hal Jordan, a.k.a. Parallax, who saved Earth in the end.

Shortly thereafter, the Legion of Super-Heroes invited Ferro to stay with them at the old headquarters of the Justice League of America. They also revealed to him, somewhat unintentionally, that they are from the 30th century.

He then became an unofficial member of the team, helping them against such foes as Dr. Psycho. Andrew also attempted to free his brother Douglas from Doc 30’s institution. But that attempt that instead resulted in Douglas’s death.

Ferro was rewarded for his bravery with an offer to officially join the Legion of Super-Heroes. He accepted. Nolan was so grateful, he made new uniforms as a gift for the team. But only Inferno’s survived a fire she started.

When the Legion was finally able to return to the 30th century, they took him with them.

Ferro consulted a number of doctors about his mangled face, but learned the only way they could fix it would be to mold his ferrous form. Since this would require him staying in his iron form permanently, he declined the operation.

Ferro wears a plain blue and white Legion uniform. His hideously scarred face is hidden behind a metal helmet he always wears.

Ferro is upbeat, pleasant and cheerful. A bit shy at times, he is friendly to most people. When he first joined the Legion, Ferro was somewhat in awe of the Legionnaires, and couldn’t believe they wanted him to join. 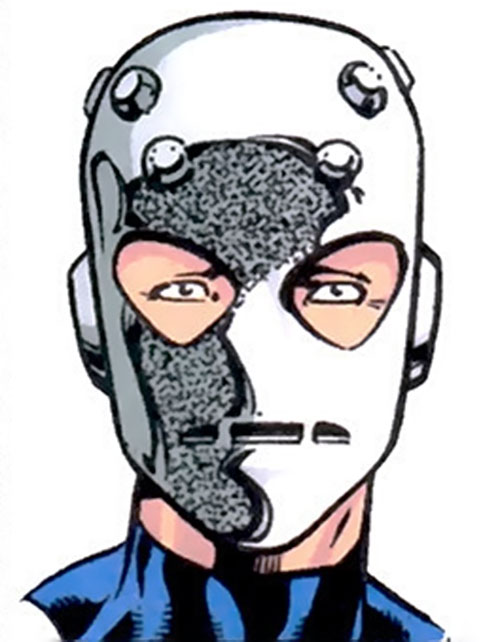