Originally, the Fighting American was a Captain America variant, published in 1954 by Cap’s creators (Joe Simon and Jack Kirby) and Harvey. There wasn’t a lot of material, though.

There were several, small revivals of the concept – mostly because Simon and Kirby are such big names.

The first such revival was a 6-issues DC Comics series. It was revision of the original concepts, and has no relation with subsequent revivals by Awesome Comics.

Nelson Flagg grew up in the shadow of his more gifted older brother, John. He admired John’s accomplishments – including athletic scholarships and his war record in Grenada . But Nelson despaired that he would never be as dynamic and charming as his brother.

By 1984 Nelson Flagg was helping his brother John on the talk show “Flagg Waving”. He worked behind the scenes as a researcher while John hosted. John did a story on “Poison” Ivan Brotski, an inside trader and junk-bond dealer whose crimes had gone unpunished for lack of evidence.

After the show, John Flagg was gunned down by “Poison” Ivan’s thugs right before his horrified brother’s eyes.

Nelson and his brother’s body were quickly picked up by Congressman Dorkin and a group of government agents. They’d been monitoring John Flagg because he was the ideal subject for a bold new experiment to fight the Commies: Project Fighting American. Though John was dead, his body could still undergo the enhancement process and even have another person’s mind transferred into it.

The mind transference process only worked on subjects with very similar genetic patterns. This made Nelson the only eligible candidate. Nelson agreed, motivated by his long-standing desire to be a hero like John and to track down the men that killed his brother.

The scientists of Project Fighting American believed the mind transfer would take six years to complete. As it turned out, it was nine years before Nelson’s mind made the transition.

During that time, the Soviet Union collapsed. The Project Fighting American team despaired, for their reason for existence — and hence their funding — had disappeared.

One of the project leaders found a way to salvage the situation. The Fighting American was retasked with hunting down domestic threats to civil liberty. When “John” Flagg emerged from his long slumber, his first target was “Poison” Ivan. This fit perfectly with the new goals of Project Fighting American (not that Flagg cared at the time).

After taking down “Poison” Ivan, the Fighting American fought numerous enemies with symbolic themes. These included the gonzo multimedia terrorist group known as the Media Circus and the bloated Gross National Product. At the same time, he revived the “Flagg Waving” talk show. Flagg explained his decade-long absence by claiming to have been lost in the jungle.

His secret identity didn’t remain secret for very long. He was upset with the duplicity of maintaining two identities and ended up revealing himself as the Fighting American on “Flagg Waving” while defending his heroic identity’s actions.

The Fighting American and his colleagues eventually discovered that all of their enemies had a common bond. These ne’er-do-wells and even Flagg’s supposed friend Congressman Dorkin were all working for a conspiracy called the Free Association.

Traveling to Ireland, the Fighting American learned that the Free Association was a group of aliens. They had landed on Earth centuries ago and were trying to homogenize human culture to make it more manipulable. They’d even secretly supported Project Fighting American to that end.

The Fighting American chased the evil aliens off the planet and returned to the US, promising to continue fighting to protect his homeland.

The Fighting American costume is a blue bodysuit with red boots with yellow trim and a yellow center stripe, red shorts sporting a yellow belt, red gloves with yellow trim, and white panels along the flanks and inseam. Centered in the chest is a white star on a red circle enclosed in a white ring.

A banner of stripes (three red stripes divided by two white ones) wraps around the shoulders and connects to the sides of the chest logo.

The costume was topped with a red cowl that left the ears and the lower face (including the nose) exposed. The cowl originally had a yellow skullcap, but the Fighting American quickly shed that in favor of an open top ending with a stylized eagle’s head silhouette on the temple, allowing his hair to flow free.

The Fighting American has the personality of a cardboard-cutout Golden Age hero. He is indefatigably optimistic, well-meaning but a little slow to put two and two together. He’s ready to intervene in any situation without hesitation, whether it’s a cat stuck on a flagpole or a crazed mob rioting.

Flagg was a little bewildered by the changes in society during his time in stasis, but gradually adjusted. In this way he was similar to other time-tossed heroes such as Captain America (Steve Rogers) and Captain Atom, though his sense of disconnection was not nearly as strong as that of either of those two thanks to his shorter period of lost time.

Between his confusion with the modern world and the moral quandaries he encountered in his work, Flagg felt that he was in over his head at times, causing him to brood in doubt during quiet moments.

“What compulsion propels this techno-beast ?!”

“Yes, son, some day we’ll look back fondly and remember that these were the good ol‘ days !”

Though the political allegory and satire in the series was very superficial, there’s no reason the character couldn’t be used in similar settings with more depth. Such as those of the Morrison Doom Patrol or Gerber’s Howard the Duck.

“I’m the body of Johnny Flagg inhabited by the mind of Nelson Flagg! I’m the Fighting American!”

Though Nelson’s mind inhabits the body of his brother, the transfer is not truly complete. The husk of Nelson’s old body still lies in stasis in the labs of Project Fighting American. Its continued existence is necessary to Nelson’s survival. This can be treated as Personality Transfer: 06 with the Limitations Always On and Body Left Behind While Transferred.

At the same time, the unusual nature of the Fighting American’s mind allows him to throw off Mental tampering more easily than he would otherwise be able to. This effectively gives the Fighting American Iron Will: 04. But instead of adding RV against Mental control Powers, it adds to the EV of attempts to break free of such Powers.

“We halted the train and saved untold lives ! This is the best of times !”

Notes:
The Kid (whose name was never given) was one of the backstage crew on “Flagg Waving.” He assisted the Fighting American in his battle against the Media Circus and was subsequently inducted into the project, honing his athletic skills in training with Flagg.

The Kid’s greatest contribution to the team was his sharp wits. He was much more adept at figuring things out than his partner ever was.

The Kid was a young black male with short Jheri curled  hair. He wore a outfit much like the Fighting American’s; though the top half of his uniform was a leather jacket rather than spandex, the basic color pattern was the same. The Kid wore a red domino mask instead of a cowl.

He adored the Fighting American and eagerly plunged into the fray alongside his idol, determined to fight the good fight. 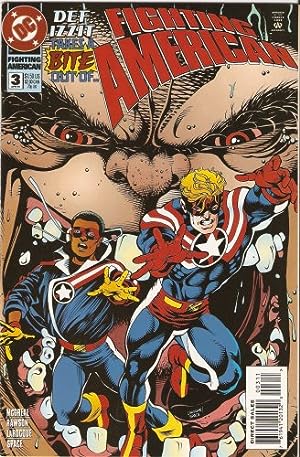 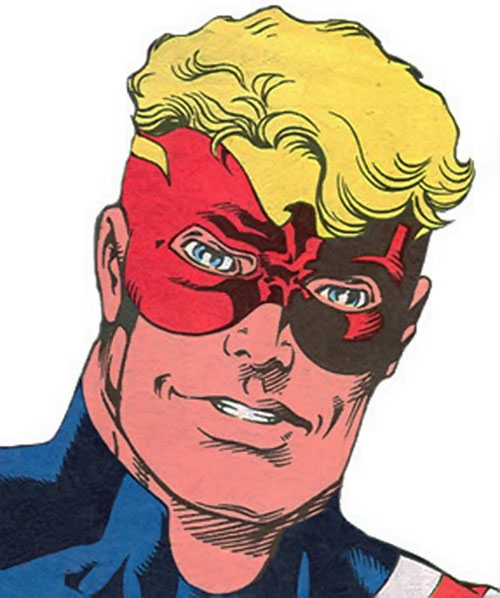 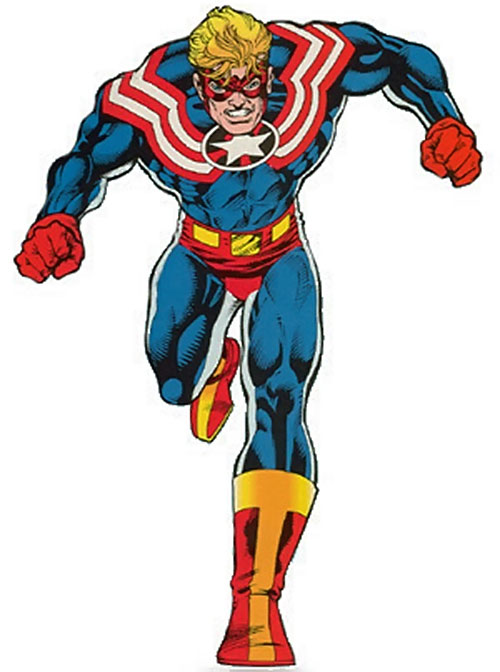 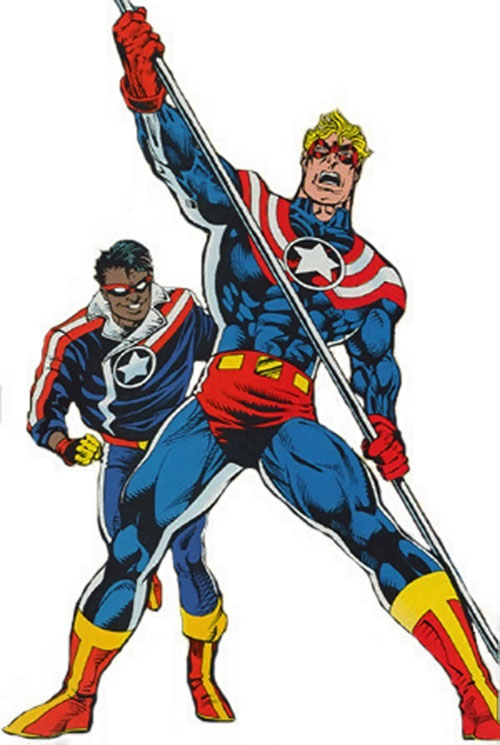 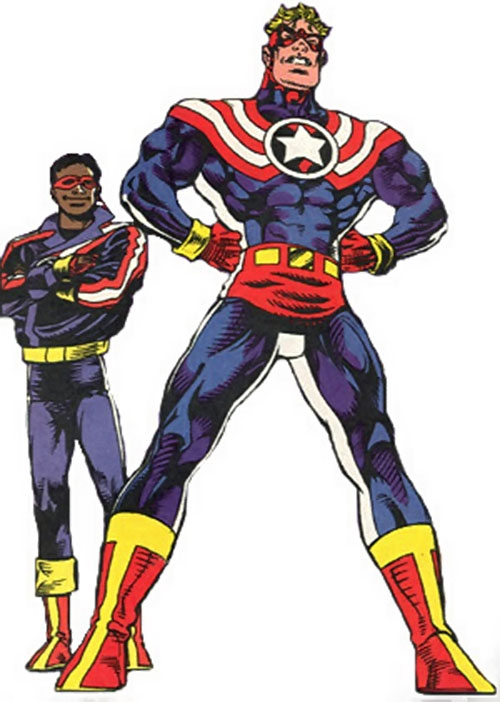 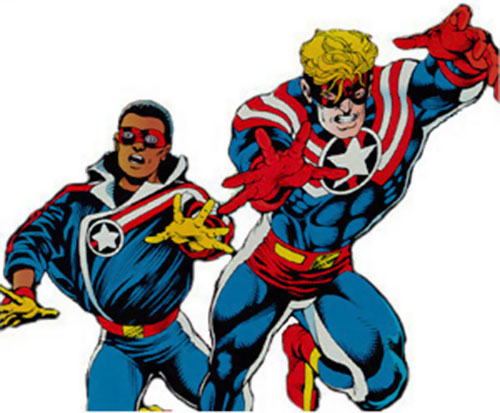 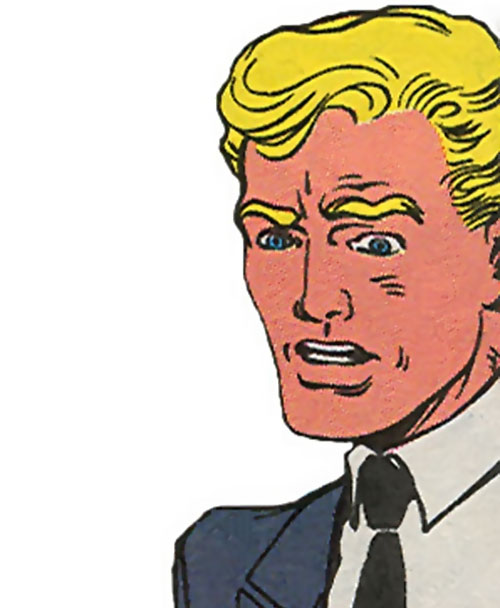 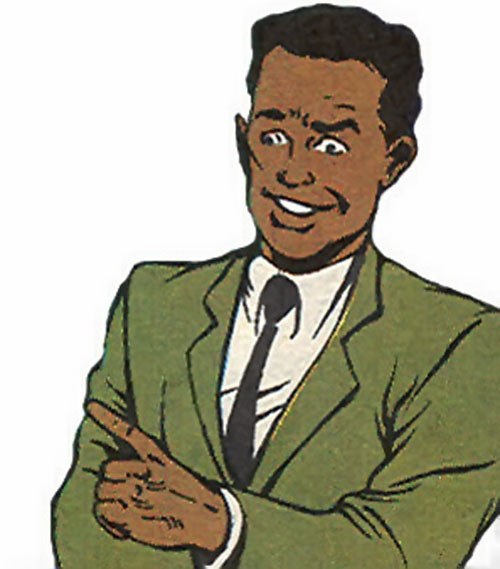