Finale’s race are capable of living both in and out of water, and spent a lot of time in the depths of the ocean. As a consequence she is superhumanly strong, agile and fast.

She wears a full body suit, which completely covers her and cannot be removed unless she wills it. And she wields the “Sword of Destiny”, a powerful relic from her home world.

Finale’s people lived in the Great Mother Ocean, and the small islands within it. They loved their freedom more than anything. So when the Rapture came to their world, seeking to add them to it’s hive mind, they fought it.

When it became apparent that they could not, it fell to their princess, Leilani Pahe Fava’ela, to protect the only freedom they had left. She killed them all. Her friends, her family, her entire race, even the soul of the planet, leaving it a barren wasteland.

Finale met Cascade and Network when they travelled to her world. Cascade performed her a service, for which Finale feels indebted to her. She joined them as they gathered the other Sovereigns together.

For most subsequent events, see the Cascade profile.

When Network was kidnapped by Chimera and appeared to turn against the team, Finale took this seeming betrayal the keenest. She left the team, and tried to start her own life in Manhattan. But she returned to the team after a while.

Following Rampart’s funeral, Finale caught a glimpse of him in a crowd at a New Orleans Mardi Gras. She even had a possibly hallucinatory encounter with him. Convinced that he could be brought back, she embarked on a quest, with the help of Pansy and Violet, to rescue him.

When the other Sovereigns opposed the Rapture’s invasion of Earth, Finale came to their aid, and helped turn the tide of battle.

Freedom was the most important thing to Finale’s race. She is fiercely devoted to her own freedom, and that of others.

After what she had to do to her people, she considers herself tainted, and cannot bear to go near water, for fear that she would pass the taint on to the Great Mother Ocean.

She maintains a slight distance between herself and those around her. She is afraid of what she is capable of doing, ever since the genocide. She thus has a vulnerability where relationships are concerned.

“I am a warrior, not some domestic menial.”

“Everyone wears armor, Pansy. Some are simply more forthright about it.”

“All water must someday rejoin the Mother Ocean. When it does, for the sake of all who live upon this world, it must have no taste of me.”

Cascade: “The hospital released you, Finale ?”
Finale: “I was needed. I left. Wisely, the physicians chose not to argue the point.”

“I am bound, Cascade, by a geas  no mortal can withstand. To destroy anything tainted by the Rapture.”

“We swore an oath in blood, you and I, Rhian Douglas. I, to serve you unto the death. You, to deliver me to the death should this day ever dawn. Please, Rhian. I’m so tired. I beg you to let me go.”

Drawbacks:
Guilt (about having killed her world’s entire population), CIA to destroying anything tainted by the Rapture, MPR (She has webbed hands), Miscellaneous Drawback (Owes a debt to Cascade), CIF of exposing her skin to or being touched by water, SIA to Freedom. 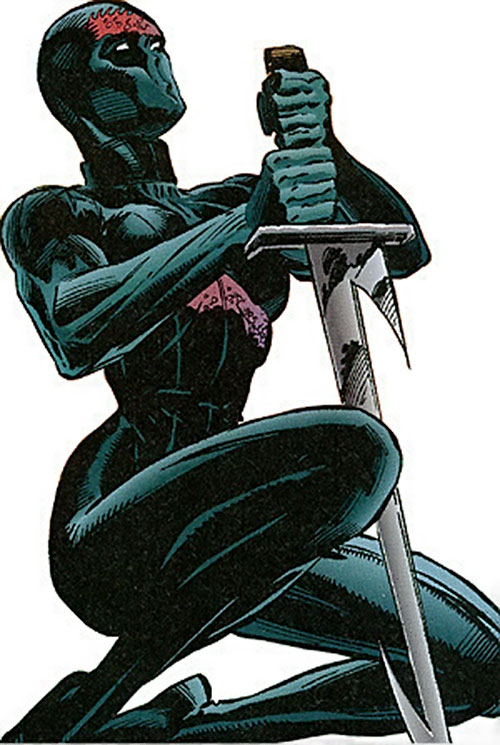