Karla is an odd, obscure Aquaman character. She only appeared once, in a 1965 storyline.

But Writeups.org contributor Vinnie thinks that she’s so groovy that even you fab hep cats will flip, dig ?

As should be obvious from her nom de crime, Fire-Haired Karla possesses a mane of fiery prehensile hair. She calls it “living flame”. The heat generated by her flaming tresses is so intense it is unaffected by water.

She can split her hair into at least four locks to encircle her opponents in a fiery cage. But she normally attacks with it in one mass of hair by stretching it over her head to strike at targets.

Karla is skilled in the piloting of the aliens’ undersea saucer.

When asked by her Terrible Trio teammate, the Invisible Un-Thing about her powers, she remarks that she was “caught in what is politely known as an ’industrial accident‘”. This is what turned her hair into living flame. Because her fiery tresses made her undesirable to men, she sought to have her revenge on them.

In her first and only recorded encounter with Aquaman, Fire-Haired Karla, along with the Un-Thing and the third member of the Terrible Trio the Fisherman, allied herself with a race of aliens. The group referred to these only as “Them.”

The theft of water

The aliens sought to invade Earth. But they possessed a fatal vulnerability to water. Therefore, they enlisted the aid of the three criminals in disposing of the world’s oceans.

The aliens gave the Trio a strange satellite that created holes in the ocean. Naturally, this attracted the attention of Aquaman, Aqualad, and Mera. Our heroes came to halt the satellite’s destructive progress through the ocean.

The villains did well against the Aqua Family initially. Karla kept Aquaman and Aqualad trapped in a living flame cage while the Un-Thing captured Mera. Meanwhile, the Fisherman regained control of the ocean-stealing satellite. After the Un-Thing rendered Aquaman unconscious with a viscous beating, the Trio, and the kidnapped Mera, zoomed away in an undersea saucer supplied by the aliens.

When Aquaman revived, he and Aqualad pursued the villains. Their second battle ended in the Trio’s defeat and Karla’s capture in a Mera-created hard-water hand. With their human lackeys vanquished, the aliens revealed themselves. They attempted to kill the Aqua Family and the Terrible Trio.

I was betrayed by aliens !

Naturally, good guy Aquaman saved Karla and her teammates from death by alien ray cannon (Karla: “Th – Thank you, Aquaman ! You’re a man I could admire !”) 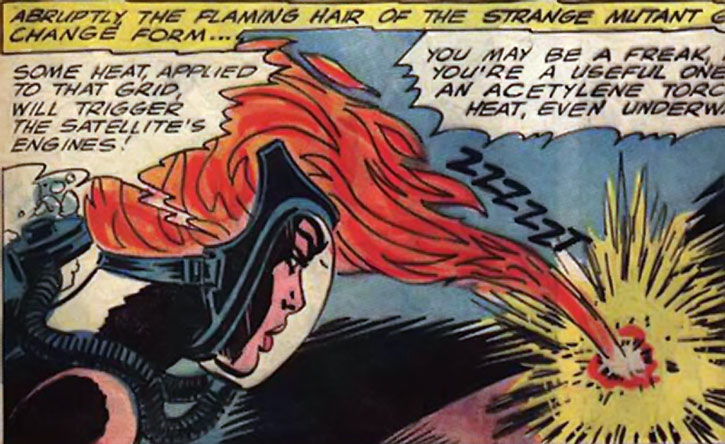 Using the undersea saucer to control the ocean-stealing satellite, Aquaman and Karla chased the alien spacecraft out of the sea. Once above the water, they rammed the satellite into the spacecraft. The alien invasion thus ended in a terrific explosion.

Aquaman turned the Terrible Trio over to surface world authorities. He promised Karla that for her part in defeating the aliens he would ask them to be lenient towards her. Fire-Haired Karla has not been seen since.

Karla’s hair is a bright red mane of fire. Her beautiful face is normally set in an expression of anger and bitterness.

Fire-Haired Karla is consumed by anger over her condition. She bitterly refers to herself as a freak.

She wants revenge on the world in general and men in particular. Yet she displays sufficient control over her misanthropic tendencies to work with the Un-Thing and the Fisherman.

By the end of her encounter with Aquaman, Karla seems to have turned over a new leaf on life. 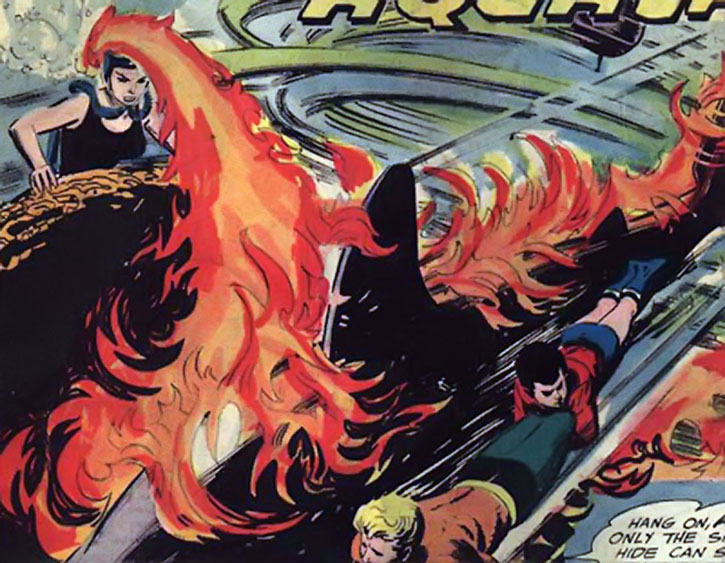 “Ha … The mighty Aquaman and his teen-age ally… like all males who oppose Karla, they’re pushovers !”

Though Fire-Haired Karla has not resurfaced in the post-Crisis DC Universe, it is possible for her encounter with Aquaman to have occurred much as it was originally presented. It is possible that her long absence was due to her “paying her debt to society” and she is only now being released from prison.

During the course of her encounter with Aquaman, she refers to the Sea King as a “gorgeous hunk”. And she admits after Aquaman saves the Terrible Trio that he is a man she could admire.

An interesting idea may be to treat Karla as if she developed an unhealthy fixation on the Sea King during her time in prison. This could spell trouble for the recently-as-of-this-writing reunited Aquaman and Mera.

Another route that a GM might take is to have Karla affected in a different way by her encounter with Aquaman. She may leave prison with a desire to put her Powers to good use on the right side of the law. The adventure’s constant remarks regarding her “freak” status could suggest a membership in a new Doom Patrol. 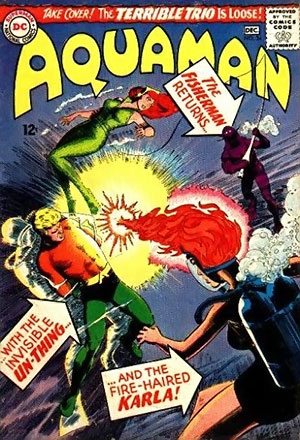 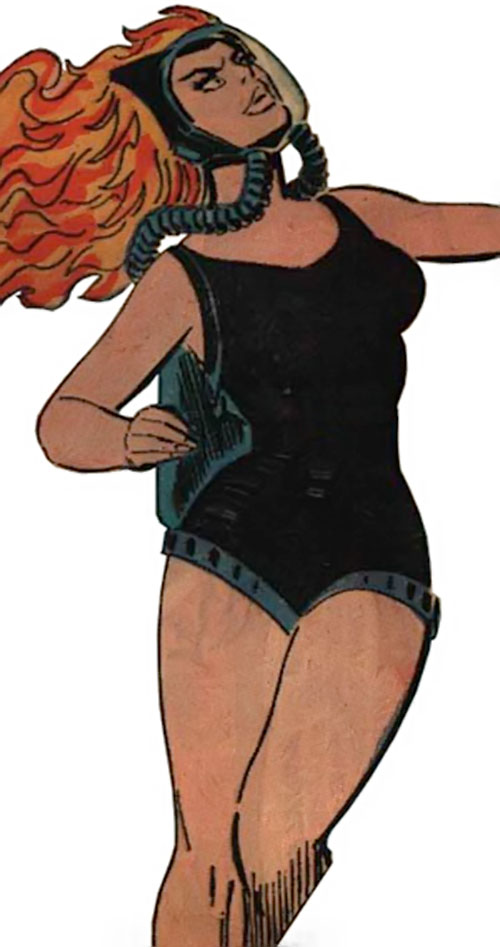 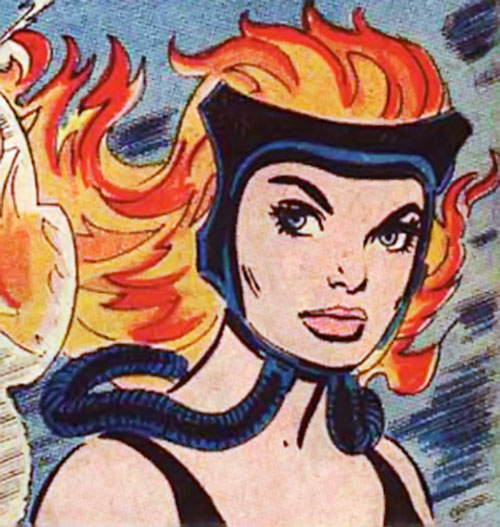