Lopez was a good Aladdin agent – but certainly not the best. He was proficient with athletics, firearms, technology use and the like.

Hitch, on the other hand, was the Lodge’s best sniper, and also shone as a commando and infiltrator. He was further trained in basic computer warfare.

Even Hitch paled in comparison to the previous Firearm, of course. This is an example the Lodge’s diminishing competency. Still, Hitch was a competent enough commando to single-handedly kill a dozen guards within Aladdin’s complex.

Firearm II has occasionally demonstrated the ultra-ability to project fierce flame from his hands. But this power is not under his full control and only activates in dire emergencies.

It is not clear whether, after the second Burial, Lopez retains Hitch’s level of killing skill.

After Alec Swan (code-named Firearm) left the Lodge, one of the Ministry of Defence’s dirty tricks squad, the organisation tried to rebuilt itself. Their aim was to recover from the treason that had led to the retirement of Firearm and the death of many of their best agents.

In time, a new agent demonstrated such remarkable skill at sniping that he became the new Firearm. However, while Swan was a great bloke as well as a multi-talented agent and soldier, the new guy, Hitch, was little better than a killbot.

Hitch was selected to undergo the process of “Burial” and become a sleeper agent. The “Burial” process meant that his memories were locked away within his own mind. Then, an artificial identity was constructed over his neutralised real one. He also underwent surgery to change his appearance.

Weeks later, he effectively *was* Peter Cordova Lopez. Lopez was a young American who had the ideal profile to be recruited by the US intelligence/enforcement agency Aladdin. For this was the plan – Hitch/Lopez was to worm his way deep into Aladdin. He would become the Lodge’s inside man if the relationship between the UK and the US intelligence communities were to turn sour.

After he was recruited, “Lopez” trained hard to become an elite Aladdin field agent. He also married a colleague, an analyst named Marylu. They had a son.

After five years, “Lopez” was deployed for his first field mission, wearing a special suit. He was to contact and exfiltrate an informant who held the secrets of an highly-advanced anti-ultra  weapon. He was too late, however – the man had already been killed by the ferocious Blood brood.

Lopez barely escaped from his savage opponents alive. What made his survival possible was the discovery that he was an ultra. To his astonishment, he shot flames from his hands.

However, unknown to Lopez, somebody was killing off other deep cover Lodge agents. The killer was sending to the Lodge a clear message – its days were numbered. Then, one of the Lodge’s Inner Circle was killed through self-combustion. All clues pointed toward Aladdin being behind the murders. The Lodge decided to retaliate.

A short time after his harrowing first mission, Lopez received a telephone call from the Lodge. That immediately reversed the Burial – blocking access to Lopez’s memories and personality and unearthing’s Hitch’s.

The killer went to a hidden Lodge weapon stash in the desert. He then easily infiltrated Aladdin as Lopez. His orders were to destroy the whole headquarters as a suicide mission.

Using Lodge stealth technology, Hitch prepared a computer virus to fry Aladdin’s system. However, he then realized that the Aladdin computer were already at a high alert level. This made viral injection impossible.

The Lodge then initiated plan B. Firearm was to rally a critical point of the Aladdin base and blow himself up using explosives in his costume, taking the base with him. Firearm fought his way in, killing Peter’s colleagues and friends. But when he reached his suicide spot, he happened upon a video of himself as Peter.

Memory overload set in, and he collapsed before he could arm the explosives he carried. The man woke up as Peter Lopez, with no recollection of what he had done as Hitch. As he was interrogated by Aladdin staff, his wife Marylu was being presented with evidence that her husband never existed. He always had been a cover for somebody else.

Using his recently discovered ultra-power, Hitch escaped, picking up Lopez’s wife and son on the way. They soon found themselves hunted by Aladdin. Furthermore the Lodge started hunting them down too. They now realised that Aladdin had never been behind the attacks on their agents, and sought to eliminate Hitch as a cover up.

*Furthermore*, the Blood brothers wanted to kill Lopez for having set one of their own on fire during his first mission.

As they fled, Hitch/Lopez kept switching back and forth between his Lopez and his Hitch persona, hammering his sanity. As to Marylu Lopez, she was struggling with the realisation that her husband was another man.

The Lopezes managed to work together to outmaneuver the opposition. Then Hitch/Lopez ultimately had the Lodge perform Burial on him so he would be Lopez again.

The first costume is the Lodge one ; the second is the Aladdin one.

James Hitch was a cold bastard, a mean murder machine, a stone cold killer. He never got over the trauma of seeing his older brother fatally run over by a car as they were playing rugby in front of their house as a kid. As a result, he became unwilling to form any deep attachment. He even prided himself on his joyless, angry demeanour.

When he was “reborn” as Lopez, his defining moment became not the death of his brother. It was falling in love with ’Lu, their marriage and their son. Experiencing what Hitch never could, he became a happy, grounded man with a loving wife and a great family life. He also was an excellent husband and father.

While Hitch grimly killed dozens, Lopez was nervous before his first field mission. He wasn’t a cold, emotionally stunted professional like his previous self.

I’m your Janus, I’m your fire

After the Burial was undone, Hitch/Lopez were in a lycanthrope  situation. They switched periodically, but did not remember what had happened while in the other persona.

Hitch was not very successful at playing the role of Lopez. This resulted in an horrible situation for Marilu who occasionally had a stranger in her husband’s skin. There was a man trying to pretend that he was Lopez, but which she almost was sure wasn’t.

Hitch was also growing violently jealous of Lopez for having married such a beautiful and loving woman. This jealousy was worsened by knowing he was in effect jealous of himself, and by his wife’s fears.

Meanwhile, the Lopez identity was experiencing traumatic flashbacks to the death of Hitch’s brother.

Hitch eventually realized that Lopez — and Marylu and Peter Jr. — were his chance to let go of his childhood trauma and resultant alienation and bloody bitterness. He thus was willing to have his persona (and the secrets to the anti-Ultra weapon) buried again, so he could from now on live as Lopez with his family.

(As Hitch) “Only targets smile.”

“I remember dreaming. I *never* dream.”

“Man. James Hitch couldn’t bed a female like this for a month’s hazard pay ! If I ever meet my other self face-to-face, I’ll ask Mr. Lopez – ’what’s your secret weapon ?‘”

He’d certainly work as a DEO agent. Or as a Checkmate rook working his way to being a Knight.

Bonuses and Limitations:
Flame project is a Minor Marginal Power.

Advantages:
Expertise (Sensors-proof weapons). Formerly had Credentials (both Aladdin and the Lodge depending on personality, Low).

Drawbacks:
Dependents (his wife and son), SPI (after the Burial was broken, random switches from one persona to the other). 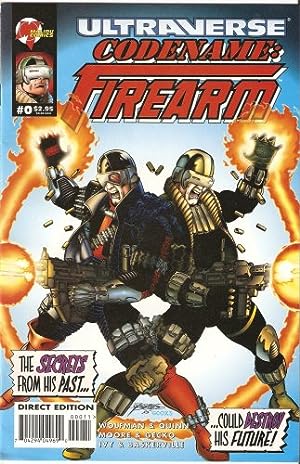 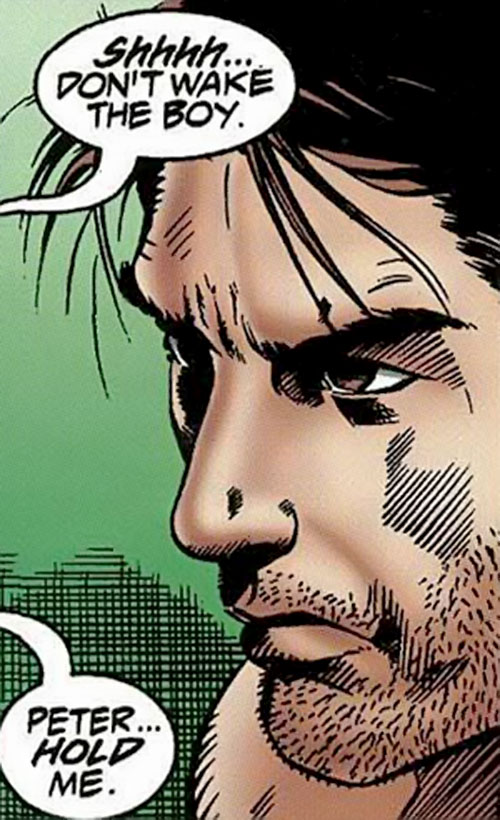