Byrnes is a competent researcher in pyrotechnics, who made at least one major breakthrough.

In the grand comic books tradition, since he was disfigured and went insane, he also possesses a maniacal level of strength (in DC Heroes terms STR, Martial Artist). This allowed him to fare surprisingly well in hand-to-hand combat with the Blue Beetle.

His suit of armour is able to operate deep into raging industrial fires, protecting him against heat, flame, fumes, glare, etc.. It also has armoured plates to protect against falls and falling debris, as well as heavy gauntlets.

It packs a nearly inexhaustible amount of recreated “Greek fire” in an armoured backpack. The liquid gets pumped via armoured lines into the heavy gauntlets, the fingers of which end in high-pressure nozzles.

Firefist’s unique incendiary formula results in fires that are abnormally hot and difficult to put out. The usual firefighting tools and techniques have little effect on his flames, and even the best commercially-available fire-extinguishing foams will yield very poor results.

In DC Heroes terms, treat this type of fire has having 12 APs of potency when trying to put it out with Powers – see our rules files for more about fires.

Lyle Byrnes was a pyrotechnics researcher in Chicago. One day, a sudden research accident turned his lab into a wrecked inferno.

A fireman came into the room, but was stunned by collapsing debris. When one of his colleagues found him, he pried his fellow fireman out and dragged him out. But they apparently did not hear Byrnes’s cries for help. Thus they left him to burn, pinned under a beam.

Eventually, the floor collapsed. This saved Byrnes, though he was badly burned and severely disfigured. During his months in the hospital, he developed a somewhat insane hatred of the CFD. To take his revenge, he developed the identity and gear of Firefist the Incendiary Man.

At the heart of his arsenal, shot from the finger nozzles built into his gauntlets, was his recreation of the legendary “Greek fire”. This is a potent incendiary compound that, according to myth, could not be extinguished until it had burned itself out. 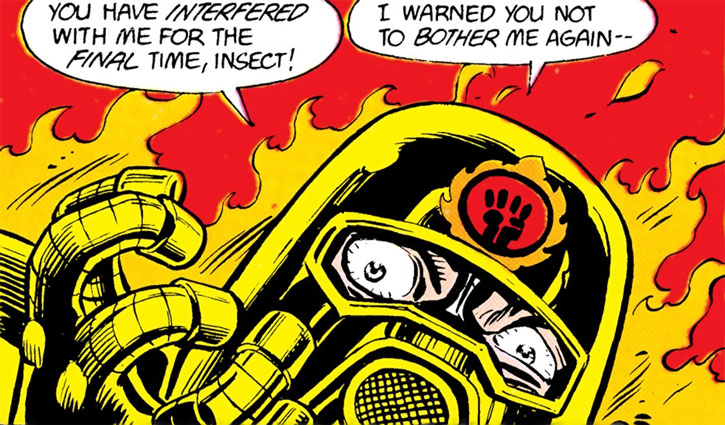 Firefist started striking in Chicago, starting with the buildings housing the apartments of prominent firemen. He also prepared his big strike against the opening ceremony of the Chicago Museum of Firefighting. The Blue Beetle (Ted Kord), who was just coming out of his self-imposed retirement, came after Firefist.

The Beetle deduced Byrnes’s identity and to intercept him at the ceremony at the Museum. However, the Incendiary Man still managed to torch much of the Museum. The Beetle unmasked Firefist, who fled in a panic to hide his ravaged face. At this point, the roof collapsed around the arsonist and he disappeared into the inferno. No body was found.

Byrnes resurfaced much, much later in Smallville, as a hired hitman. His psychological state seemed to have considerably improved, though he was still a bit weird. He was one of a number of minor villains hired to conduct strikes on places and people in Smallville whom Superman held dear.

Like the others he was stopped within seconds by Superman as soon as he was detected.

A raging psycho, with a murderous, petty hatred of the CFD. He considered that he had died as Byrnes during the fire in his lab.

He was full of bitter resentment at his disfigurement, greatly fearing the gaze of others on his destroyed face.

Apparently, in the years between his initial appearance and his documented return, he got considerably better. Mind, he still kept his face hidden and behaved as an antisocial, murderous arsonist. But was feeling pride about his discoveries and felt he deserved some recognition for them.

He was flakey, but not violently demented.

(1986) “They’re cowards, every one of them —! They abandoned me to the flames — left me to die — as you shall all die for daring to support them —! Feel the flames of Firefist, fool — and know what it is to suffer !”

(1986) “No ! You mustn’t mention that name ! Lyle Byrnes died in his burning laboratory ! Now there is only Firefist ! FIREFIST — THE INCENDIARY MAN !!”

Drawbacks:
Strange Appearance, MIF of having his face revealed. Formerly had a MIH of the Chicago Fire Dept..

His Maniacal Intensity Power may have diminished as he became saner, but on the other hand he might have improved his suit.

His Averaged PL ends up deceptively low, since he’s rather one-dimensional and has clear weaknesses. But for a street-level character the Toughness, constant All-Out Attacks and sheer destructiveness of fire on the environment make for a threat greater than a PL 7-ish would suggest. 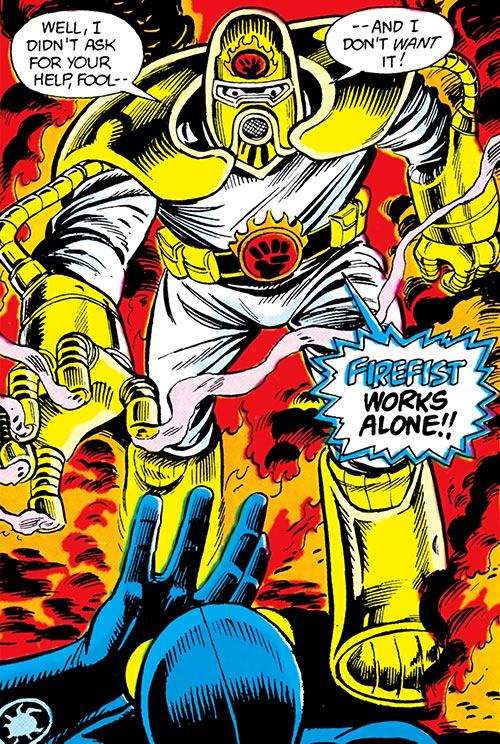 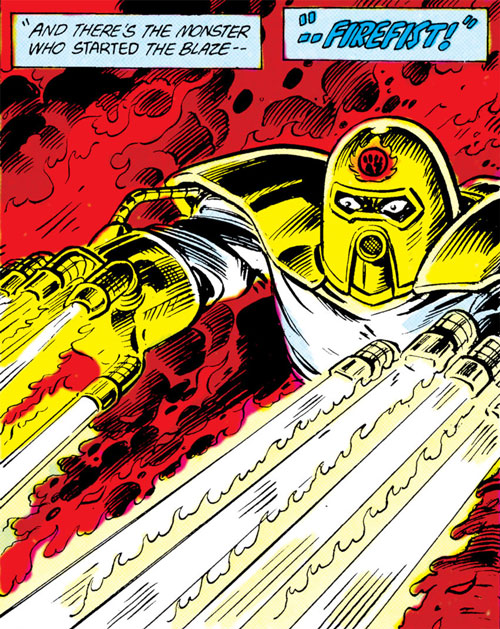 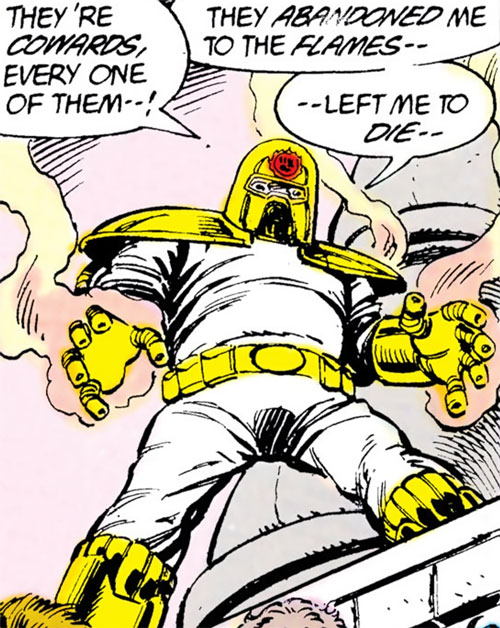 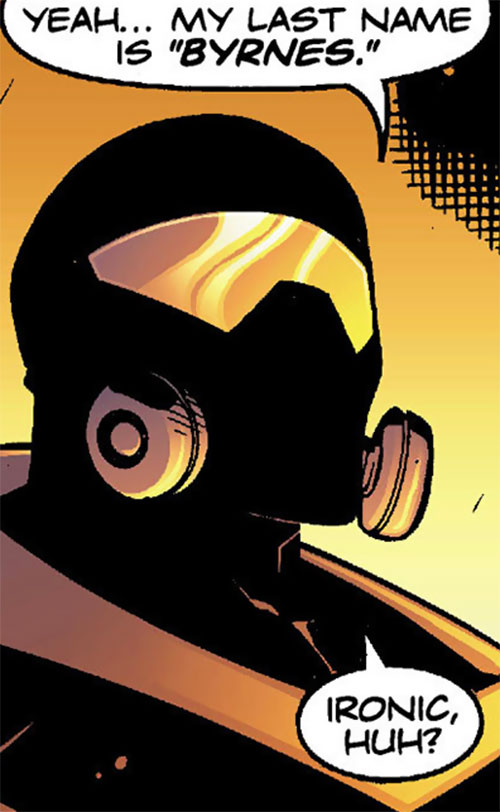 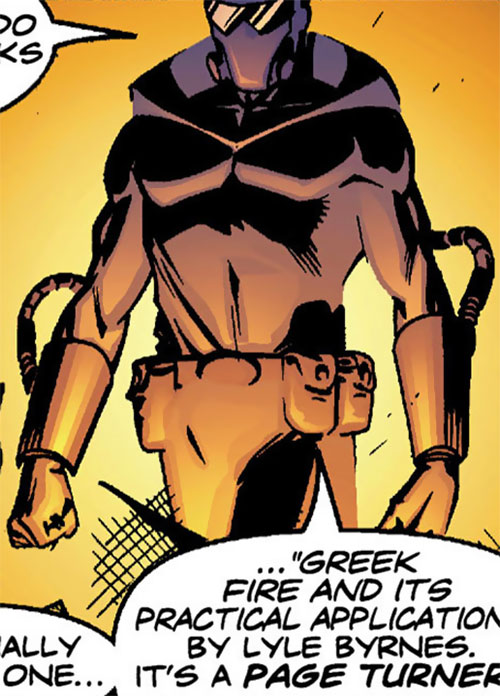 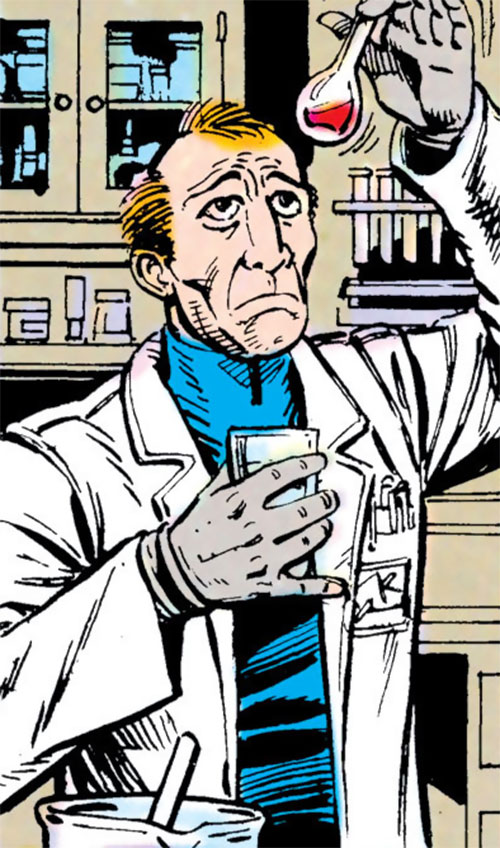