Firefly seems to be a normal, if athletic, human in a superpowered suit. The suit is fireproof, padded and insulated, and can ignite objects with a touch. It also has flaps which allow him to glide on the updrafts from the fires he starts.

The suit does not appear to be waterproof, and exposure to water shorts out its circuits. The same is true of fire-extinguishing foam.

A second version of the suit could project heat and flame blasts from the gloves, though the range seemed modest.

It is unrevealed whether the Firefly created the suit he wears, or whether he acquired it from another source (possibly Justin Hammer). He appeared starting blazes at energy plants in the New York area.

This drew the attention of Nova, who eventually caught up with him in the Westhaven nuclear generating station. The two fought, Firefly managing to set Nova on fire. But it ended quickly, when Nova flew Firefly into a nearby pond.

The Firefly suit proved not to be waterproof, and the arsonist was easily subdued.

Firefly spent seven years in prison, but he broke out in 1984. He almost immediately returned to his old trade, attempting to torch a grimy building in Manhattan’s Lower West Side. Iron Fist (Daniel Rand-K’ai) and Power Man (Luke Cage) intervened, but were stalemated for a short while by Firefly’s flame blasts.

Seconds later, Firefly was neutralised and arrested by Crime-Buster (Eugene Mason), a ruthless bounty hunter. He ain’t been seen since.

Depending on his motives (which weren’t stated) he’s either:

Either way, he’s overly confident in his ability to handle any threat.

“So you caught up with me, kid — only… who cares ? Certainly not the FIREFLY ! Or did you actually forget I’ve got heat circuits built into my uniform. All I have to do is touch you, and you’ll go to blazes !”

The second version of the suit had Flame project: 07 with the Diminishing Limitation and a Range of 03. This Power was its own AV (+1), though that also was Diminishing.

In his second appearance, his suit has the ability to project blasts:
– Burn:

Assuming an appropriate background, he might have Ranged Attack 2, giving his fiery blast an attack bonus of +5.
This raises his points total by 7 (to 70). 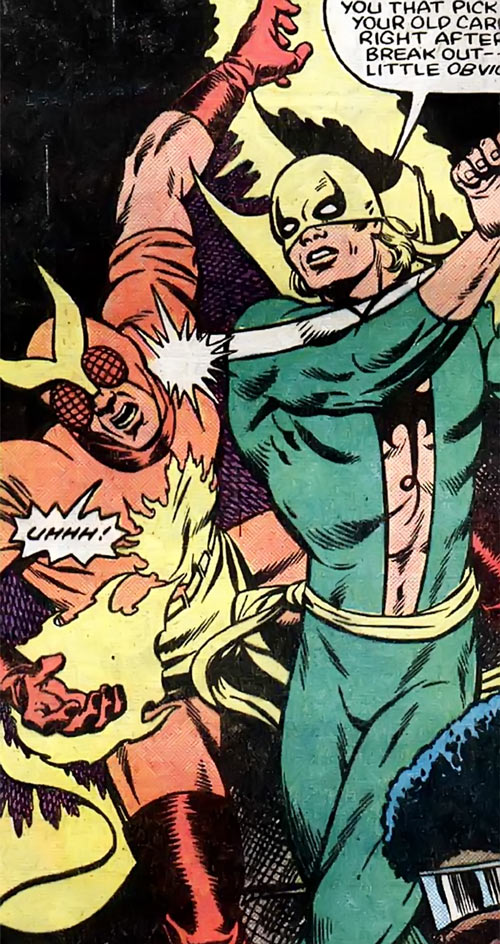