Firefox is a combat monster, a one-man military SWAT team and executioner. He possesses formidable skills in weaponry and shock tactics. Firefox once “sculpted” a hammer and a sickle by simultaneously using two trees as target practice – each tree getting shredded into shape by one of his automatic guns.

He has numerous scars and has been maimed on at least two occasions.

Firefox always wields two guns. One is his “wire gun” replacing his lost hand and forearm, the other a normal automatic weapon held in his left hand. These are seldom used simultaneously. This is presumably a matter of having a lot of ammunition, since with his missing hand Firefox has a hard time reloading. For some reason, in the US Firefox only had the wire gun.

Firefox usually goes for urban assaults tactics. Burst in with a powerful tear gas grenade, ruthlessly execute everybody with automatic fire, swiftly grenade hardpoints and keep moving. When facing mutants he will often deliver a sarcastic remark before killing them off (in DC Heroes RPG terms, Intimidation Subskill).

Firefox seems to have immunised himself to tear gas and low temperatures (perhaps through repeated exposure and raw badassery). Our game stats assumed mithridatisation against all sorts of dangerous conditions, given these precedents. He could also quickly recover from a drugged dart used by the Black Widow.

Ironically, Firefox’s extraordinary toughness and combat prowess are a weak point of sorts. His habitual superiority means he tends to just wade in and shoot everything to bits rather than plan, gather intelligence or come up with special tactics.

Grigori Andreivitch may have been one of the top soldiers enforcing the old “kill on sight” policy the USSR had toward mutants starting in the 1930s. This policy only started relaxing in the 1950s when Piotr Phobos’s experiments were authorised. Firefox likely continued to be sent to sanction rogue mutants after the 1950s, though.

Those fights are very likely the explanation of his numerous scars and other body damage, as well as his violent hatred of mutants.

After the fall of USSR, Firefox became a mercenary hitman, but his main employer apparently still was the GRU. One of his first documented contracts, in the early 1990s, was paid for by Colonel-General V. Shatalov (then with the GRU – that was before Remont IV). Firefox was to eliminate a network of mutant dissidents headed by the mutant Blind Faith (Father Garnoff).

Firefox once again proved brutally effective. He slaughtered many of Blind Faith’s operatives (such as Concussion, Mentac or Iron Curtain) and mutant refugees on their underground railroad system.

Firefox worked his way up and confronted Blind Faith’s recent, and much more powerful, allies. But he was defeated by the former Soviet Super-Soldiers (Darkstar, Vanguard and Ursa Major), with Vanguard nearly killing him.

In 1995, Firefox worked security for a reactionary American spook. This man had a plot to arm street gangs with heavy high-tech firepower. The nature of the plot and Firefox’s role in it were not quite clear. In any case, the operation was stopped by Nick Fury and his son Scorpio.

Apparently, Firefox kept an interest in the US underworld and the opportunities for profit there. By 1996, he was working for an organizatsiya in the US, under one Mr. Kozorov. After slaughtering Kozorov’s enemies in a brutal warehouse firefight, Firefox coldly murdered Kozorov and took over.

Firefox then aggressively moved into the New York City organised crime space, going for a gang war right out of the gate. He was the main enforcer for his small mob. Andreivitch almost immediately clashed with the Geraci family newly headed by Don Castiglione – the Punisher.

Firefox personally kidnapped the teenage daughter of a Geraci capo, slaughtering her bodyguards. In exchange, he demanded confidential Mafia files, to be delivered by a senior made man. Firefox executed the messenger, but it was a disguised Punisher. Castiglione wore specific body armour to protect against a torso burst and the traditional KGB follow-up bullet in the back of the head.

The Punisher and his Geraci allies could thus locate and rescue the hostage, but Firefox escaped during the firefight.

Undaunted, Firefox joined a mob alliance, assembled and led by Tombstone. Their goal was to take down the Punisher and his Geraci mob before they became too dangerous. The alliance succeeded in destroying the Geracis. But the Punisher managed to take them out in return.

Firefox nearly slew the Punisher, but was unexpectedly betrayed by Hachiman, one of Tombstone’s enforces. Having a debt of honour toward the Punisher, Hachiman slashed through Firefox’s wire gun with an enhance axe, badly damaging Andreivitch’s cybernetics and taking him out.

Firefox was later seen working for a major Russian criminal named Samsonov; He was his head enforcer and hitman. Andreivitch briefly clashed with Hawkeye (Clint Barton), who took him out. In DC Heroes RPG terms, Hawkeye went Acrobatics (Dodging) the first Phase, surprising Firefox with his large OV, then won Initiative and delivered a Trick Shot to the EYEPIECE.

In a Russian secret missile base Firefox clashed with the Black Widow herself. She out-ninjaed him and took him out with a drugged dart. But Firefox recovered from this much more quickly than expected, and trapped her and Hawkeye in a precarious position. The two Avengers managed to dispatch him with high explosives once they really started collaborating with each other.

Firefox has not been seen since.

A brutal, cruel, hateful old soldier and stone-cold killer. He’s all about willpower and domination, and carves his own way out of sheer resolve and ruthlessness. He kills at the slightest provocation to generate terror and deny information.

He is almost guaranteed to go for the most brutal and efficient tactic every time. The Punisher noted that Firefox relied on textbook, blood-chilling KGB tactics and was now too old to use new tricks. Human life is of no value whatsoever to Firefox, and terminating a mutant life is actually a net gain.

In his Punisher appearances he spoke English with a Russian-like (or at least pseudo-Russian-like) grammar. This is not too bad a way to emphasise his rigid intellect (he’s not very open to new things and languages), but on the other hand… lousy cliché.

“You have come to the Firefox for either one of two reasons, Valentin Shatalov — either you want to die, or you want someone else to. Which is it ?”

“Mutant mуксун. What did you do ?”

“I have been instructed to offer you the opportunity of an honorable surrender… though I’d rather you show some spine and fight back !”

“Understand. My weapon is called a wire gun. Wired directly into my brain. I think, you’re dead, see ? And I think you’re dead.” (BRRRT)

(In English) “Am not old man. Am Firefox. And I am thinking of killing you.”

(In English) “As for you, little dove… I want you should come with me. Quietly.”

“Playing fair makes you dead, Mr. Halftree — which is what you are.” (BLAM)

Drawbacks:
SPR (missing one hand), Distinct Appearance, MIH of mutants, Loss Vulnerability (if his EYEPIECE is destroyed he gains a MPR (missing one eye) and a +1CS to OVs penalty for ranged attacks ; he also automatically suffers the 04 RAPs the Eyepiece took to his current BODY (no LDD allowed) and the Wire Gun acquires a R# of 15 as long as the EYEPIECE is not repaired).

We dream of rain and the history of the gun

Firefox seemed more efficient in his first appearance. Therein he could slaughter superhumans. He only failed when he took on a team that can destroy a small army, including a guy who once defeated the Hulk.

Later on, he started becoming just a guns guy with a gimmick.

Villain decay  is a recurrent issue when writing characters up. So let’s come up with a No-Prize  mechanic.

Firefox has a Schtick (the Motherland Schtick) that makes him operate in the Action Genre whenever he is on ex-Soviet soil. This works irrespective the Genre of the story might be. E.g., when he spends HPs they have the same effect as if the story was taking place in the Action Genre, even though everybody else might be in, say, a Mock-Real genre.

If operating for Russian concerns outside of the former USSR (such as his tentative organizatsiya in New York City) he operates normally. And if he operates in a non-Russian story he is one Genre *above* everybody else. That is, HPs he spend are less effective by one Genre.

An alternative I considered

Another possible take is that the Genre shift occurs when he’s fighting mutants – as a sort of ’racial enemy Ranger bonus’.

I also doubt he would have fared better had Hawkeye been a mutant. 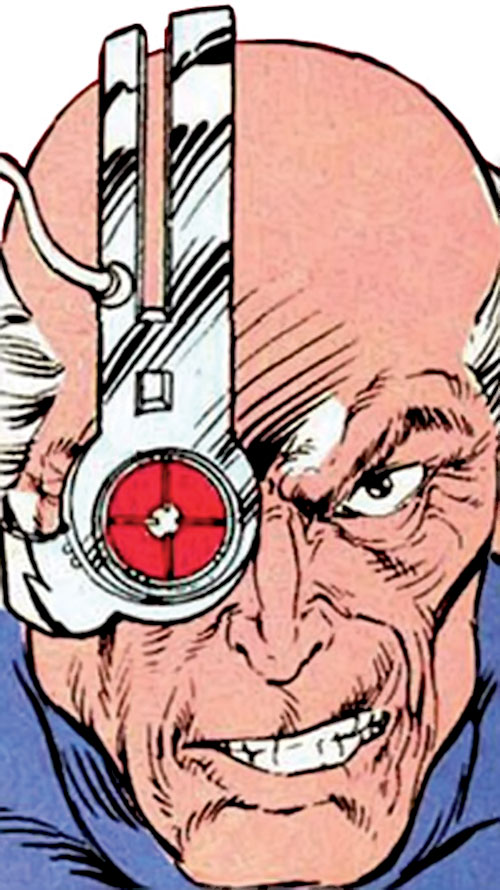 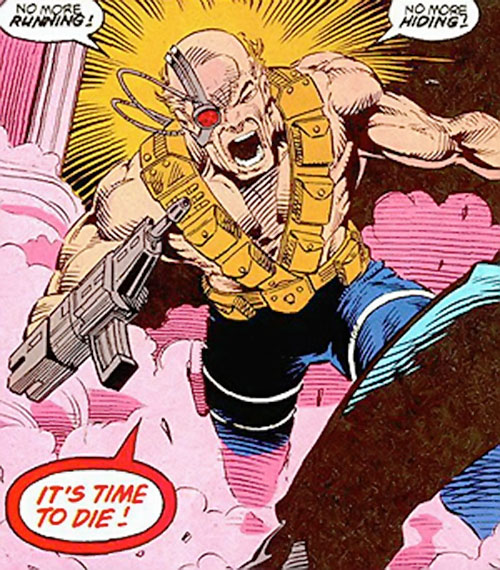 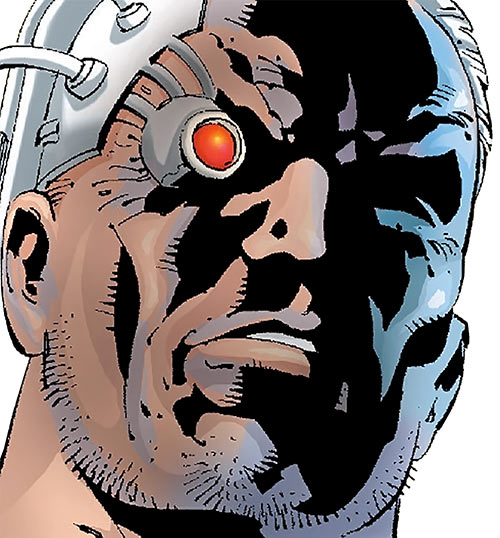 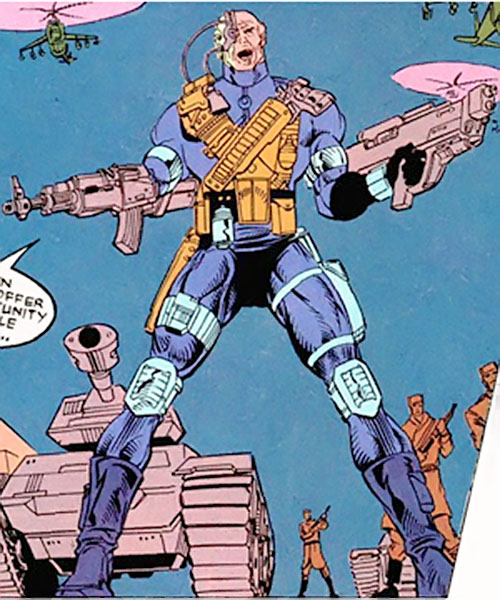 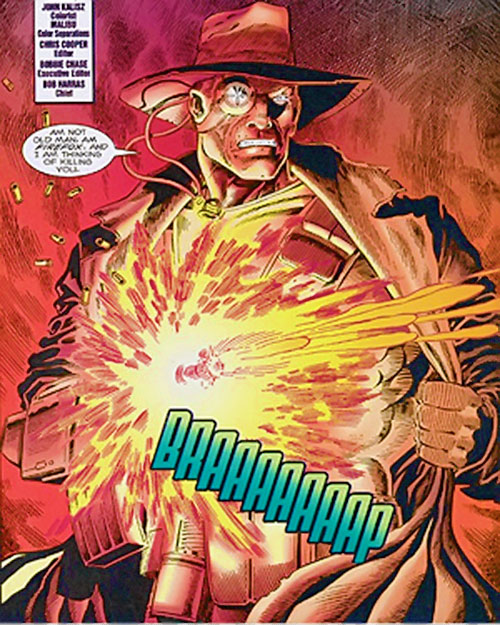