Firelion is one of the Nocturnals. If you’re not familiar with these painted comics, you should first check our “base camp” Nocturnals article. It explains the things.

Firelion might be too steeped into early 1990s geek tropes to be easily used in a more modern story. But then of course, there’s nothing that additional character development can’t fix.

Firelion is a pyrokineA person who can create fire with their mind.. That means he can mentally generate flame, like in Stephen King’s Firestarter.

This is a devastating ability, capable of killing multiple nearby persons within seconds.

Furthermore many resilient kinds of undead, such as vampires, are as vulnerable to fire as humans.

Firelion usually fights at close range with flame and his katana. He can make his blade burn. Presumably, the sheath is modified to add a film of specialty oil when drawn.

He but rarely carries both blades – katana and wakizashi. Firelion is always seen fighting with just the main one. 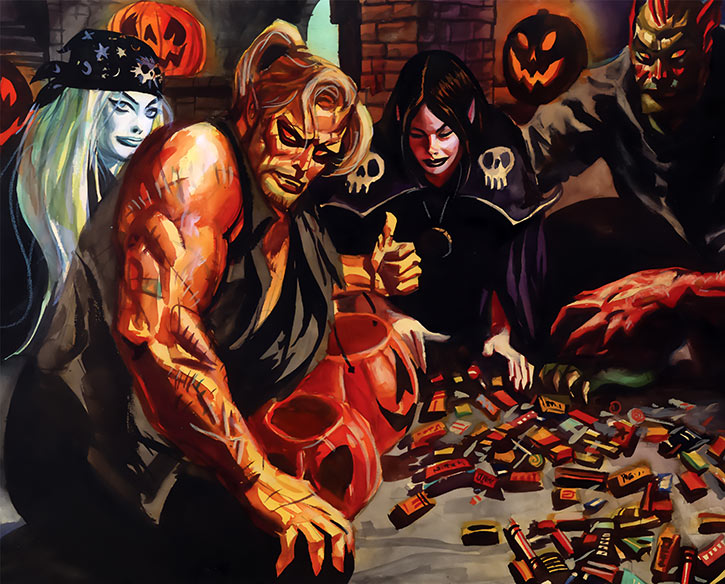 Firelion has an advanced synthesoidAn artificial being built using organic-like tissues, rather than robot-like hardware. body. This frame is far more durable — and more expensive — than common synths, such as the Torpedo series ones seen in early Nocturnals adventures.

Gold is a skilled and experienced law enforcement officer. He has worked in a number of roles, though his main experiences seem to have been as a patrol officer and as a detective.

He’s also a martial arts expert, specialised in medieval Japanese forms. Since he did non-ballistic combat instruction for the police, one assumes that his skills include jujitsu, tonfa fighting and presumably other styles such as karate schools and hanbojutsu.

While you were reading comics, he studied the blade. Kenjutsu, iaijutsu, battojutsu and presumably the -do forms.

He presumably speaks Japanese, and has a good knowledge of the cultures and history.

Mr. Gold served as a law enforcement officer in a number of Californian agencies. He mentioned the State Criminal Hospital in Napa, and having been a patrolman in San Francisco. He received his detective gold shield while with the Nebula City Police Department.

With his passion for, and expertise in, the martial arts, he frequently was tapped as a police instructor. He eventually was on track to become a full-time trainer, which he preferred over the fastidious and humdrum work that’s 90% of what detectives do.

For most of his life he was aware that he had some sort of power over flame. He never really explored it. It was too volatile, too taxing on his body, and mostly served to badly burn himself when he tried.

However, he apparently ended up on some secret list due to this.

During a big collar, his uncontrolled flame resulted in a heart attack, and spontaneous combustion.

But amazingly, Detective Gold did not die. His body was rushed to a clandestine research project. His brain, spine and part of his nervous systems were extracted from the near-corpse, and transferred into a specialised synthetic body.

The operation, handled by Narn-K Corporation experts, was a brilliant success. He was the first “Burner” super-soldier that the US government could field.

Over time, four other persons made up a unit of burners. It was tasked with conducting high-impact, indiscriminate special operations. 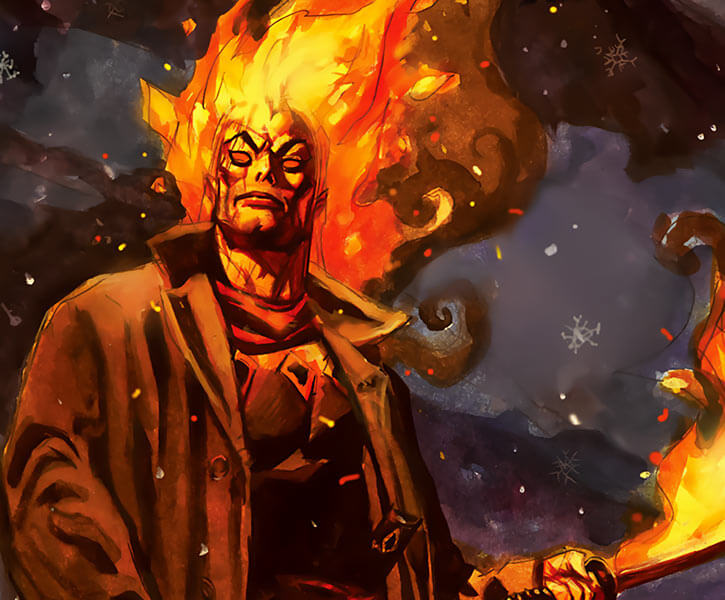 Most members were unstable. The unit thus went rogue while on a covert operation in the Middle East. Drunk with power, they deserted and attempted to carve out their own country using a captured nuclear warhead.

Gold was the most stable, most powerful and most patriotic of the lot. He turned against them and took them down, killing two and preventing a complete disaster.

The military shut down the entire project as it was too dangerous. However, Phestus was to be “retired” along with the other two survivors.

Gold managed to run, and became a discreet drifter. He came to consider that he had been betrayed by Narn-K, rather than by his country. Which may or may not be correct.

Years later, Gold met with Doc Horror. The scientist asked him to join his crew. Wanting to serve and protect, and tired of being a lone fugitive, Gold took the offer and joined the Nocturnals.

Needing a framework, Gold considers that he serves Horror like a samurai would. But it’s not something he ever mentions in the comics. It’s just a private way for him to be more comfortable with his circumstances.

Firelion has proven invaluable to the Nocturnals, whether with the team or on solo missions. He’s also served as a close combat instructor to a number of crewmates and allies. 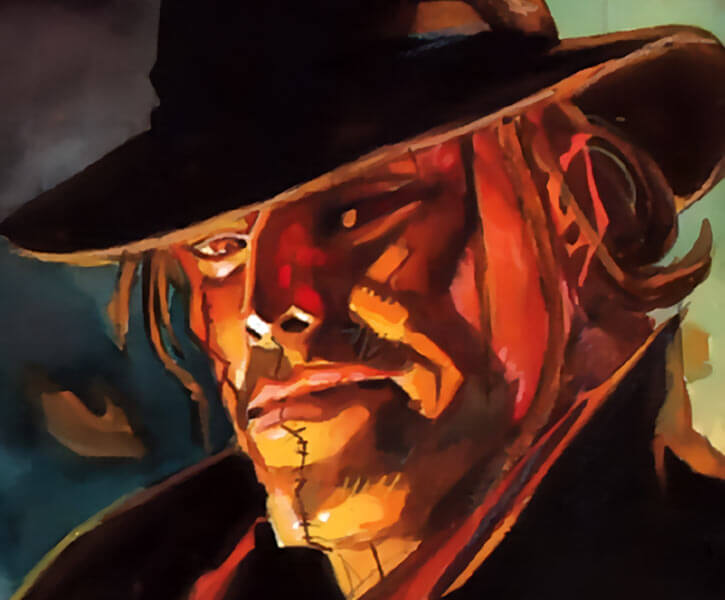 Firelion is almost always wearing the same clothes. These are proofed against fire, which is presumably why he has but a small wardrobe. The most visible article is a cowboy-style trench coat, for when he needs to hide his sword.

The clothing underneath is thus obscured, but he seems to favour tougher outdoors clothing in an Old West style, or a medieval Japanese style – or a tunic likely provided by Doc Horror. These are drab, functional clothes.

To activate his flame, Gold often lets out a leonineHaving to do with lions. roar. This is much like he would use a kiai shout for a martial arts strike. The roar and the eruption of flames are impressive, and are the reason for his “Firelion” moniker.

When he’s aflame, his voice is also deformed and sounds less human.

His entire body is criss-crossed with scars. These are actually cracks from exposure to heat, since his experimental body turned out not to be 100% fireproof after all. Over time, he will likely need a new synth body.

When not pressed for time, Gold travels light and low-tech, a bit like a 1930s hobo. He’ll have a few belongings in a bundle, carried over the shoulder using his sheathed sword as a stick. Plus a cowboy-style hat, because it rains a lot in the Pacific Northwest.

He’ll also favour forest trails and other rustic paths, as the other Nocturnals do.

He occasionally wears shades to hide his synthetic eyes. But it’s not part of his usual attire. Having those melt on his face wouldn’t be good.

Firelion is an easy-going, unobtrusive bloke. But though he’s friendly, relaxed and has good people skills, he’s also a loner. He likes people fine, but he’d rather be on his own and working through his extensive daily martial arts training routine.

His mix of police, military and paranormal experience make him an assured, knowledgeable operator. He’s calm and understands a fair bit about vampires, goblins, zombies, etc..

Firelion is also well aware of just how much firepower he wields.

Gold seems to be a man of action, and to like having a defined role. He likes his nickname. In the field, Gold can thus be the great heroic warrior Firelion, performing this simple, useful and exciting role without having to ponder too much.

Phestus is something of an outsider among the Nocturnals. He’s the only one who’d return to the diurnal world if he could, to be a cop again.

Gold is also slightly ill at ease being among aliens, monsters and dead people. But these are his friends and he cares about them.

“Some things are better left in the dark, Detective. I hope we’ve made our point.” 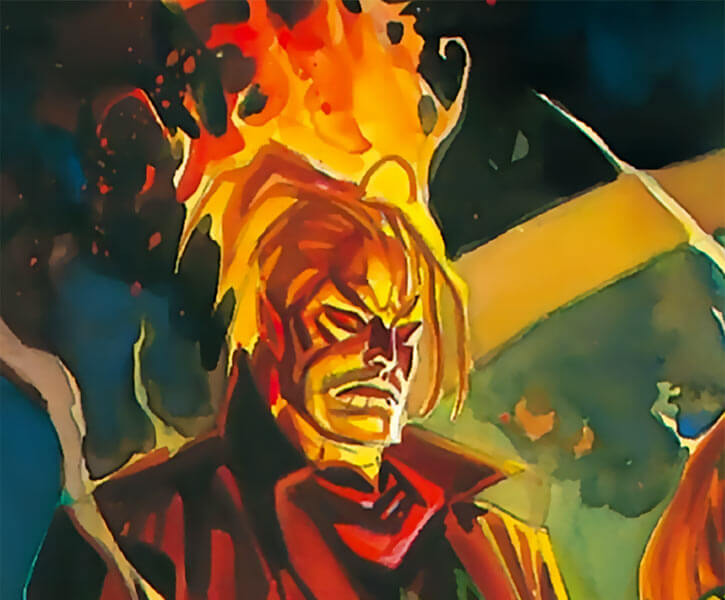 Katana [BODY 06, Enhance (EV): 02 (cap is 09), Flame being: 02, Descriptor: Slashing, Piercing, Limitation: Flame being can only be activated by a pyrokinetic].

That his body is slowly cracking under the heat is more of a small-s subplot than any sort of Drawback. It doesn’t seem to hinder him in any way in the field.

I’ve assumed stock police detective Skills, even where not demonstrated.