The Firepower power armour  suit has clashed multiple times with Iron Man, starting in 1988. It is an exceptionally powerful armour/mecha , with tremendous armament.

The Firepower suit was supposedly constructed to fight the next war – which, in the 1980s, meant the Third World War against USSR. But in reality it was constructed to stop metahumans if they became a menace to US military interests. It was contracted out to Cord Enterprises by the Pentagon.

It is equipped with an impressive set of weapon systems. Furthermore, it was strong enough to severely damage the Scarlet Centurion Iron Man with a single punch, even hurting the pilot, while grappling him with a single hand. It can also resist Iron Man’s repulsor beams without a scratch. 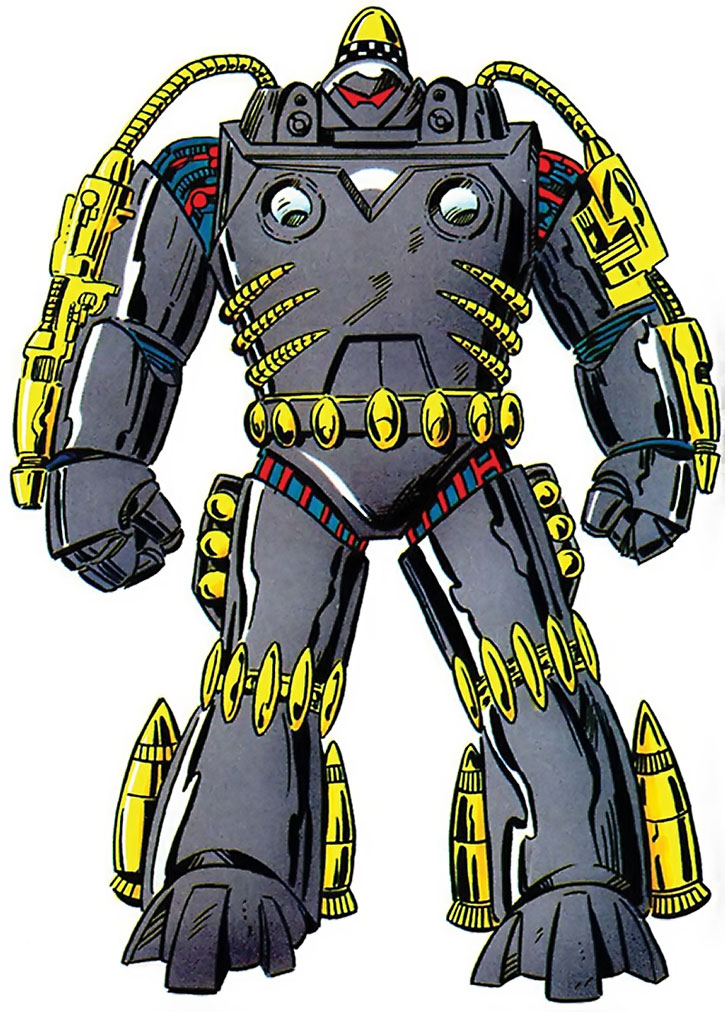 The chosen wielder, Mike Taggart, was a veteran agent had good piloting skills and used the armor effectively. But he relied too much on the ranged weapon systems and their targetting computers.

After Justin Hammer stole Iron Man technology and sold it to many villains and third parties, Tony Stark started a crusade against all armor-wielders who could be using his secrets. Even former allies such as the SHIELD’s Mandroids and the Vault Guardsmen were attacked and deprived them of their suits.

Alarmed by this offensive, the Pentagon funded corrupt industrialist Edwin Cord (an old Iron Man/Stark enemy and competitor) to build a weapon powerful enough to stop the Golden Avenger. The project was organized by one Senator Boynton, and directed by General Meade.

Cord selected Taggert as the pilot, who apparently had an extensive experience with this kind of work. I’d imagine he may have been a former Vaults armored guard. 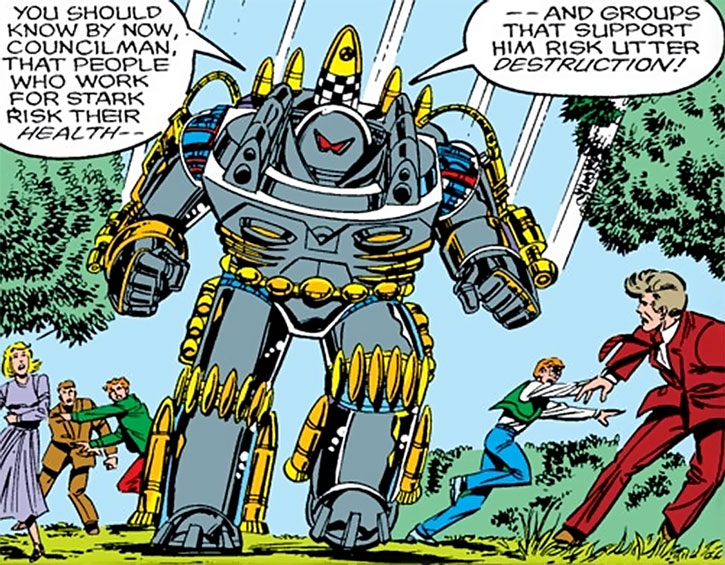 The result was certainly notable. They built a bulky, but not slow, dreadnought. It had enough weapons to destroy half of Detroit – according to its creators. The Firepower suit gave Iron Man one of his life’s worst beatings. At the end, Stark had to sacrifice his Scarlet Centurion armor, sending it off without a pilot so he could escape.

The armor was destroyed with a single-shot Terminax missile, and Iron Man was believed dead.

The man who killed the Iron Man

Stark, in one of his usual schemes, used that event to convince the world that the rogue Avenger was dead. He stated that the next wearers of the Iron Man suit were different men.

When the military tried to obtain the Firepower suit, Cord argued it was his. When pressure mounted, Cord threatened Meade and Boynton to reveal in court and under oath that Firepower had not been designed to be used against superhumans. Cord menaced to state in court that the suit was the ultimate weapon against large-scale civil unrest (weird as it may seem from the payload and design). 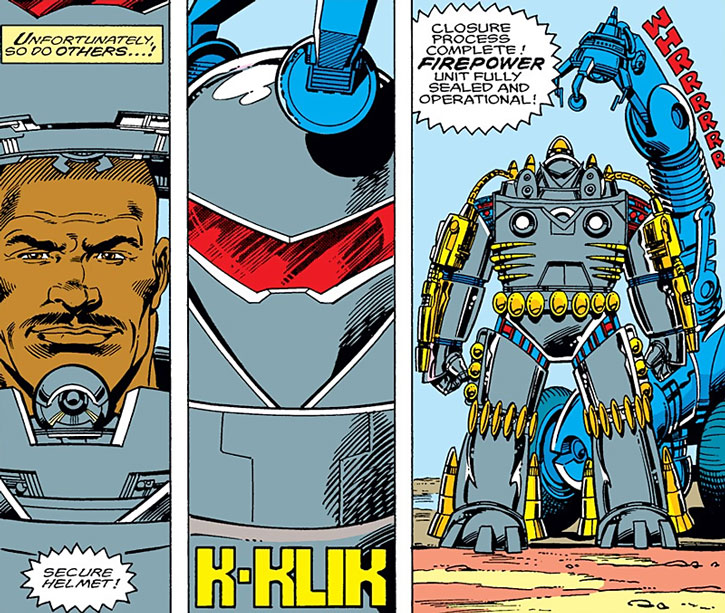 Cord gave in to his bitterness against Stark. He used Firepower to terrorize Stark Enterprises clients and employes, without worrying about the damages and casualties it caused.

Firepower appeared again while Jim Rhodes was acting CEO of Stark Enterprises. By this time Firepower was working for the US government and was sent in to stop the ecoterrorist Atom Smasher from destroying a Stark Enterprises nuclear facility.

As War Machine, Rhodes was able to find a peaceful way to assuage Atom Smasher’s concerns and deter future attacks. Firepower tried to take down Atom Smasher anyway, only to be shut down by War Machine’s EM pulse. War Machine then dumped Firepower with the other US troops and told them all to get off of Stark property.

Taggart is a large, bald black man with a moustache. 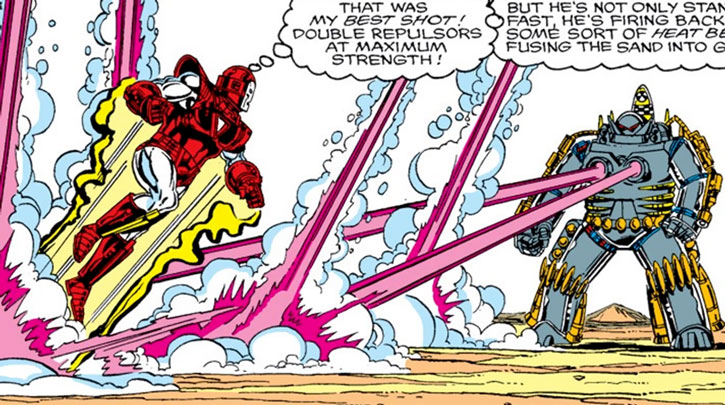 Taggart was smart enough to keep his mouth closed near his military backers. He seems to be a good, if a bit trigger-happy ,soldier. But when Cord took control, he showed his true self. Taggart acted like a dangerous bully in love with his weapons and convinced he is the alpha dog.

When Iron Man easily got the upper hand in their second clash, he was quickly demoralised. But he still prefered to throw his entire arsenal before surrender.

(While destroying two expensive, taxpayers-paid robot planes) “I could probably take them out with only two surface-to-air rockets ! But I’ve always been a sucker for a flashy ending !”

(Just after a brutal attack to a Stark Enterprises facility) “Pay attention, chump ! You don’t have Iron Man to protect you any more ! So be smart ! Do what you’re told !”

Firepower was a government contract with LexCorp that was diverted by Luthor to stop Steel (J.H. Irons) when he started his crusade to eradicate the Toastmaster gun (his own creation) from Suicide Slum. In this case, the armor’s weapons were designated using the Toastmaster’s design.

Being powerful enough to defeat Irons, he probably needed the help of Superboy or Supergirl to stop him. 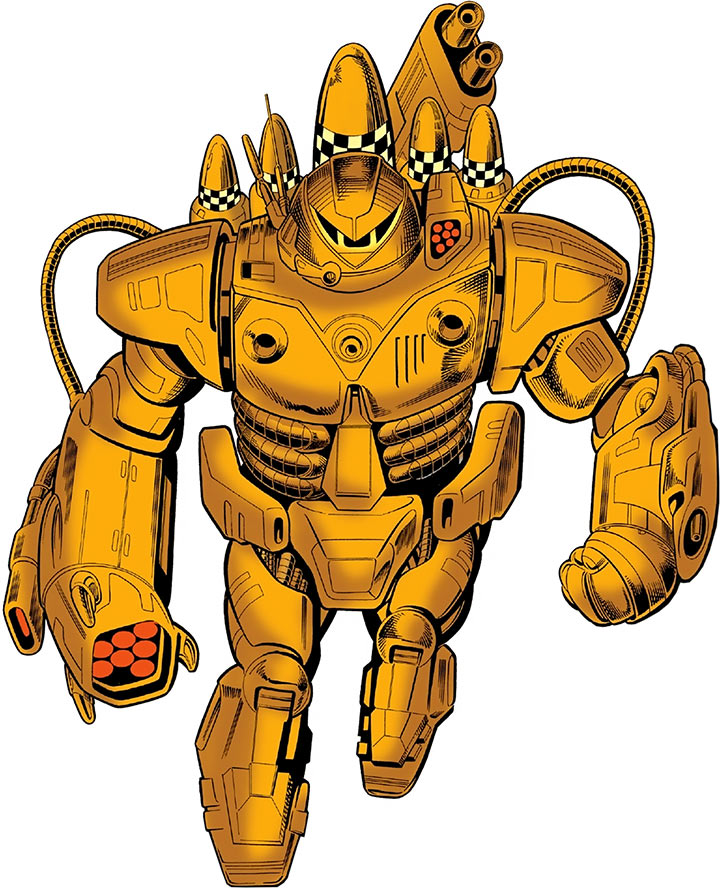 A Barrage is a form of Flailing Attack sometimes used by characters with multiple ranged offensive Powers, in which the characters fires numerous attacks simultaneously.

This scattershot approach is used when the attacker is mostly concerned with either simply hitting the target or attempting to control another character’s movement by placing a “wall” of damage in his path.

Barrages have the following Column Shifts: -1/+3 to the target’s OV/RV, -1 to the attacker’s OV for that phase as if the attacker had Pressed the Attack (which is in a sense what the attacker is doing).

As with Combined Power Usage rules for multiple Dice Actions (see the List Rules document), if Hero Points are used to defend against the attack, then the HPs count against each and every power. For instance, if the target invests 5 HPs in LDD against a Projectile Weapon and Lightning combination, he LDDs 5 HPs away from the damage from the Projectile Weapon, and 5 HPs away from the Lightning attack – and only spends 5 HPs.

Likewise, the attacker should designate a main Power whenever he fires a Barrage. Only that Power can benefit from doubles. If doubles are rolled, conserve the initial value of the roll for Powers in the Barrage that are not the main Power, and perform the additive reroll(s) for the main Power only.

A character firing a Barrage can designate a different Power as his main one each time a Barrage is fired.

In the War Machine series, the Firepower armor was piloted by an unnamed guy with some military background. He had 10 HP, and the same stats as Taggart. The armor also seemed less resistant, so give it /BODY/ 15.

This second Firepower wore the orange suit – as opposed to the grey finish of Taggart’s suit. 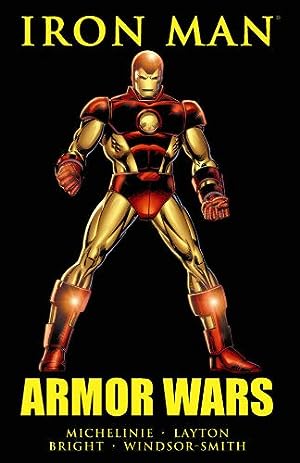 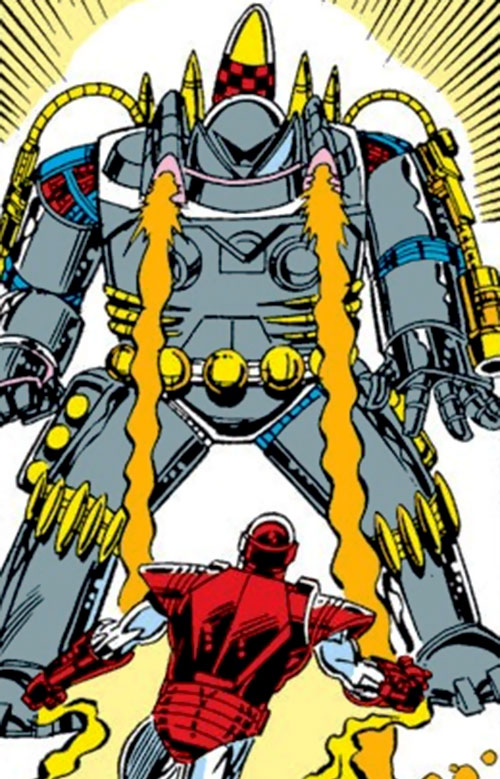 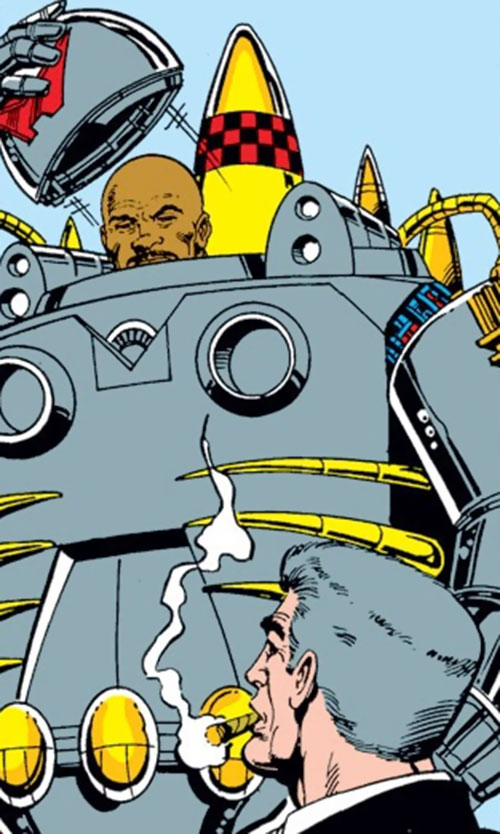 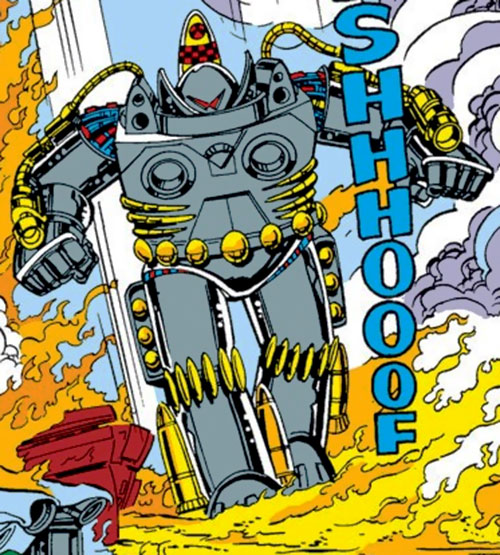 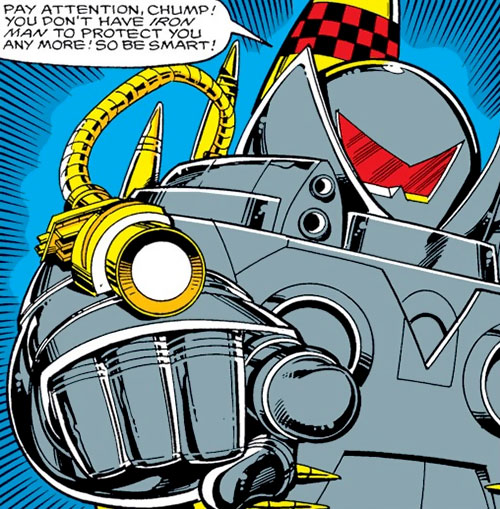 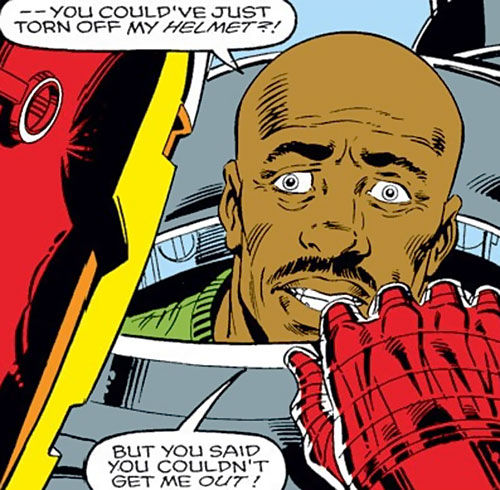 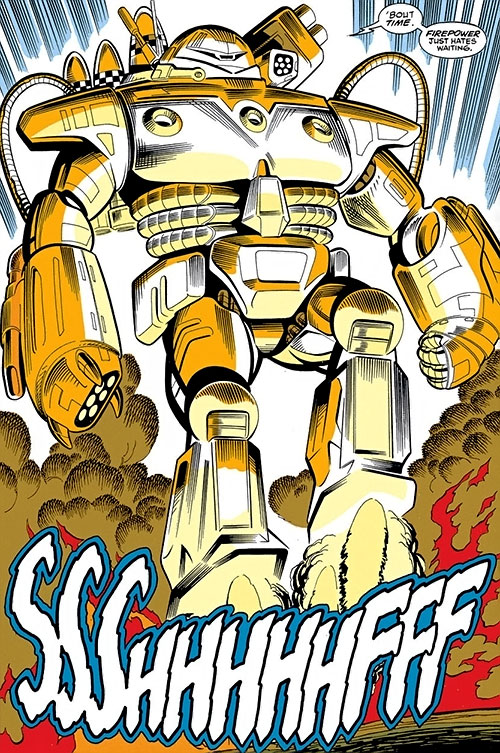