A mutant, Angelica has the power to control heat in all of its forms. Angelica is extremely susceptible to cold. Kraven the Hunter described her as the most powerful living heat source in the world.

Firestar possesses the normal human strength of a woman of her age, height, and build who engages in regular exercise. By placing flame around herself using it for propulsion, Firestar can fly. Firestar has shown herself to be quite swift and maneuverable in flight.

She can generate enough propulsive force to carry considerable weight. For example, she has carried a giant pteradon, trapping it in a flame cage and transporting it. 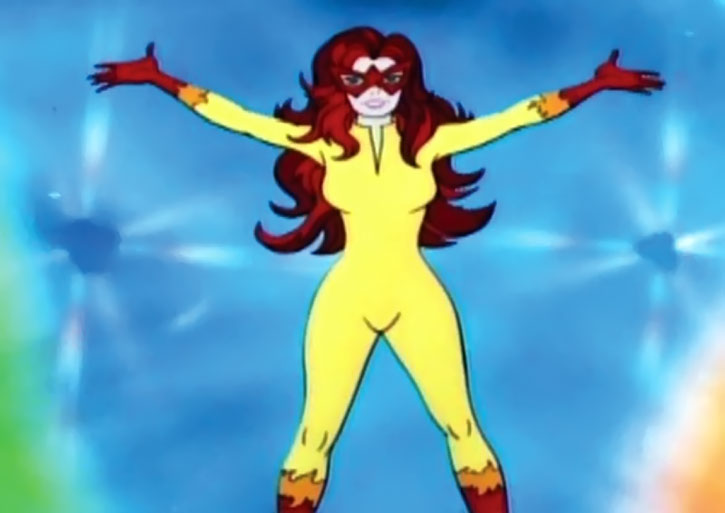 Apparently, Firestar and Iceman have put together some plans of their own. How to use their powers together to create combined affects.

When beginning her career, Angelica sewed her own costume.

It is uncertain whether or not her mother died or walked out on the family, but Angelica was raised by her father. Although they never had much money, the kindhearted Mr. Jones proved an attentive father and therefore her home life was a relatively happy one.

Angelica’s “gifts” began to manifest at an early age and so it took her a little while to gain control over them. Inevitably, however, accidents did occur and after unwittingly melting both a snowman and a doll house she was given the name “Miss Angelica Jinx” and taunted by the other children.

One little rich girl, named Bonnie, persisted in harassing Angelica throughout her school days, but she never let it get the better of her. In fact on one occasion Bonnie’s bullying lead to the discovery of Angelica’s favorite gift, the power of flight. 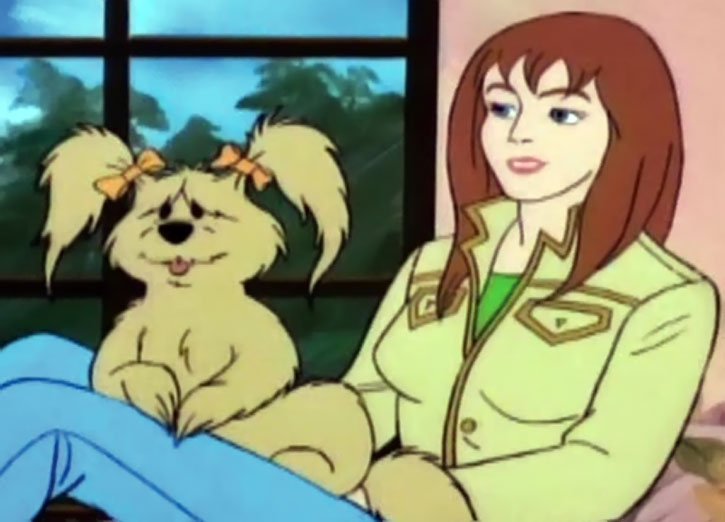 Not long after this happy revelation her new found ability was put to good use. While visiting her father at his job on a construction site, she [in disguise] saved his life by flying him to safety when part of the high story building he was working on collapsed beneath him. From then on she realized that her powers could be used to really help people and save lives.

During her senior year in high school, Firestar was born. Having been framed for stealing the school’s golden trophy cup and wrongfully suspended, Angelica sewed together a costume and set out to prove her innocence by catching the guilty party [namely Bonnie and her boyfriend].

Her plan worked, the two culprits were expelled and Angelica’s name was cleared. The uncertainty she felt over what she should do next soon dissolved when the X-Men tracked her down and asked her to join them. She accepted and was consequently trained.

This is where she met fellow X-Man, and future Spider-Friend, Bobby Drake. The two eventually left the X-Men though remained in contact with them. (It is also mentioned in an episode that Angelica spent some time studying on the west coast, where she met Nathan Price/Cyberiad.) 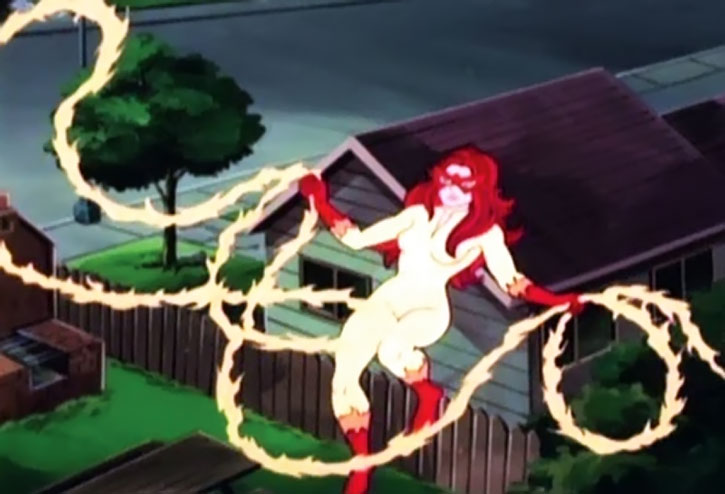 Angelica first met Peter at an inventor’s convention. When he subsequently discovered that she was in fact Firestar, she was enthusiastic over his proposal to join up as a team and it was Angelica who invented the name “The Spider-Friends.” Angelica is currently a student at ESU and boards at May Parker’s house with Peter, Bobby and her dog Ms. Lion.

Yellow bodysuit; red mask, gloves, and boots with orange cuffs. Angelica wears her hair straight, when she transforms into her Firestar persona her red hair curls up like flame itself. Her body glows with a flash of reddish orange energy as she transforms. 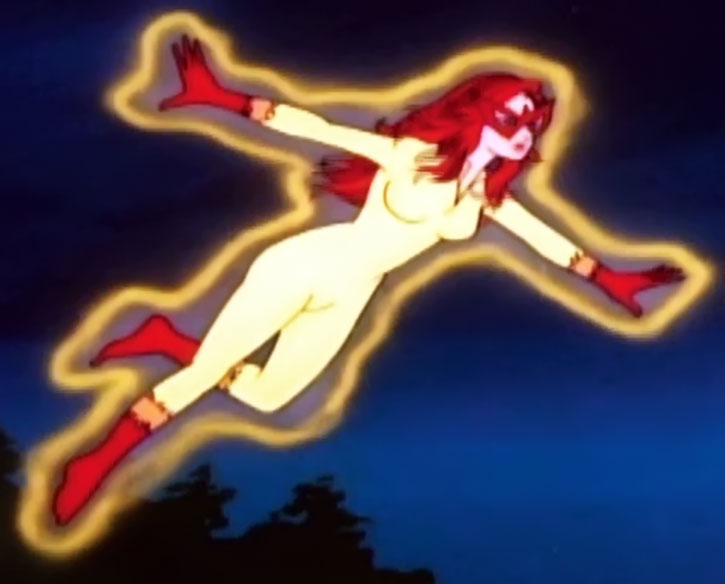 Firestar is upbeat and optimistic even when faced with adversity.

Many times Firestar acts like a starry eyed teenager. Angelica loves Peter; however the two never date because (in Peter’s case) they don’t want to risk ruining their friendship and the team if something went wrong. She had a romantic connection to Sunfire, as well as Nathan Price aka Cyberiad.

As quickly as she falls for a new guy she just as easily bounces back and doesn’t dwell on past romances. It is even hinted that she has dated the school bully, Flash Thompson. 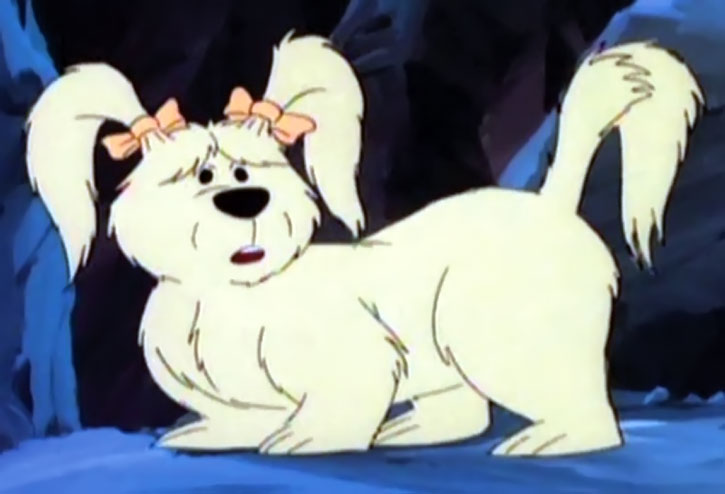 This version of Firestar lives in a New York City that is nearly vacant of citizens. Stan Lee runs a pet shop in the city and Marvel Comics Headquarters is a familiar backdrop. Adamantium  is easily obtained by super-villains, S.H.I.E.L.D., and the NYPD.

“Sorry but you’re not my type.”

“Ahhh! The cold again !” (Her flaming aura goes out and she falls unconscious)

“You never know when good luck will strike.”

“Sometimes it’s fun for a girl to make her best guys jealous.” (Giving both Bobby and Peter a kiss on the cheek.)

Spider-man: “Spider friends!”
Spider-man, Iceman, and Firestar: “Go for it !”

(When Firestar was a child)
Angelica’s Father: “Never mind how poor we are my little angel, try to do the right thing whenever you can ; you’ll be a better person.”
Angelica: “I’ll try daddy, always.”

(Fighting the Sandman) “Quick Bobby, use plan 9 before he can re-form !”

A 850 points Character (without Ms. Lion)

Previously our stats gave her Flame Immunity – as it was implied by her powers, but never actually demonstrated. If one wishes to infer this capability, her team-up with Sunfire suggests it’s probably at least one C.S. weaker than her full Flame Being, putting it in the 7-8 AP range.

Flame Being’s AP value is based on lava having a 12 AP value.

Angelica’s pet, Ms. Lion seems to understand a lot, but maintains her animal intelligence even knowing what “C-A-T-S” is when spelled in front of her. Ms. Lion is also capable of delivering hand written messages to the correct person.

Bonuses and Limitations:
Shrinking is always on, Ms. Lion may use the ’Only to Squeeze through‘ bonus to squeeze through 1AP smaller areas.

Source of Character: The 1981 animated series Spider-Man and his Amazing Friends, voiced by Kathy Garver. 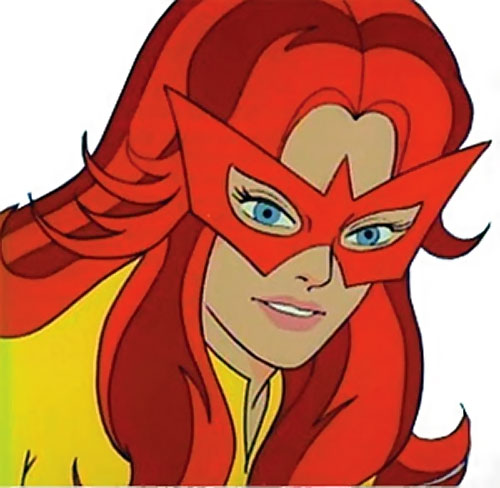 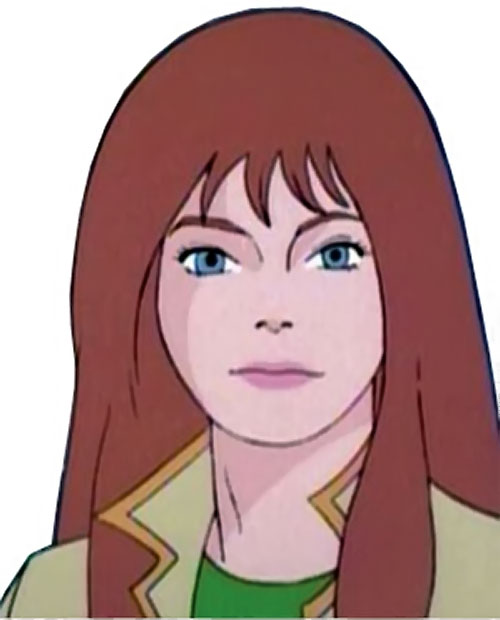 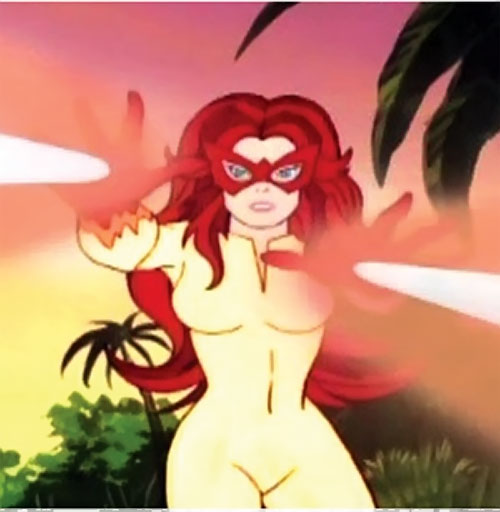 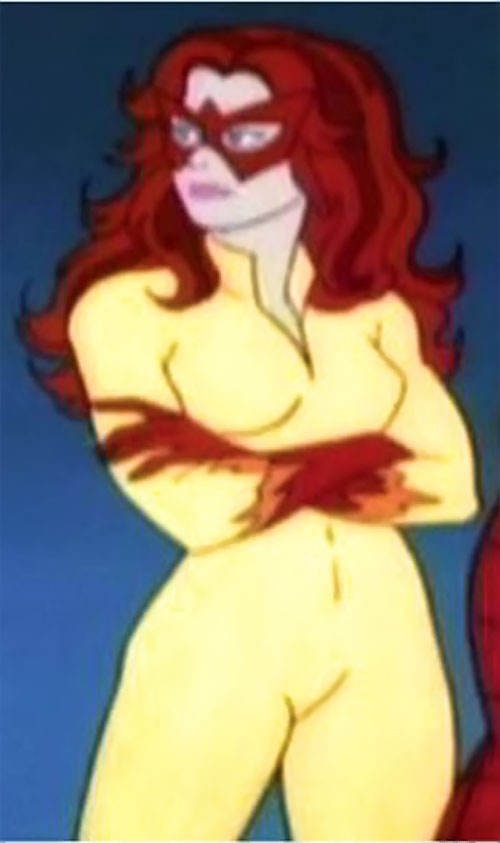 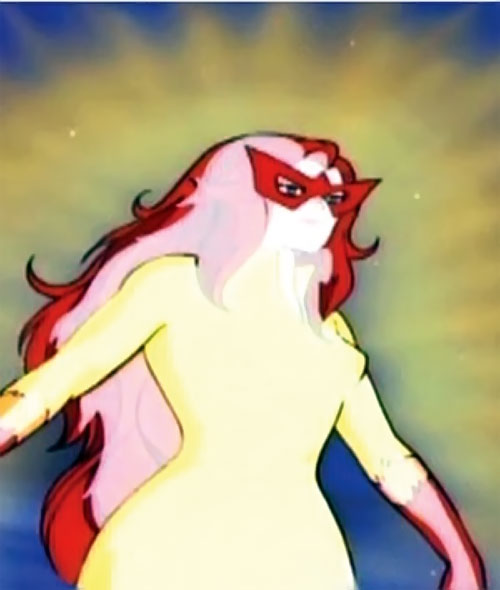 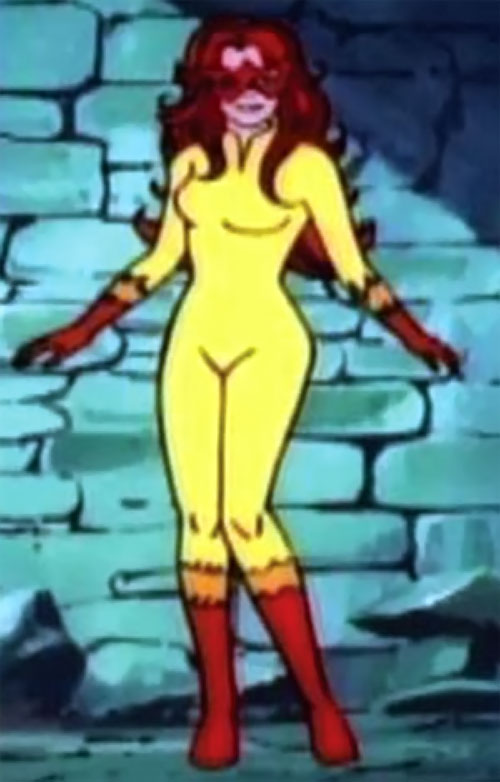