Firestorm’s powers cause him painful feedback when he tries to use them on “organic” materials. Presumably, this means that he can not create organic materials either. Well, it depends what you mean by “organic”.

He managed to change a newspaper into a bouquet of roses, for example. On numerous occasions, he creates plastic (or wax) versions of plant or animal matter (since he presumably should not be able to create plant or animal matter). Yet anything containing carbon is technically organic and plastic contains carbon.

He is able to affect a stuffed bear (which in theory *could* have been created out of all synthetic materials). But he later creates lemon curry and caviar (actual, real caviar). And he has problems affecting an inorganic machine containing the mind of a villain, and he can’t affect Slipknot’s rawhide noose.

So, what is “organic” anyway? The way Firestorm’s limitation works is that he can’t affect

Furthermore, he can not create such material… except as noted, which are presumably cases where the feedback happened to score no RAPs.

To use Firestorm’s SIA to poor use of his powers, roll each round that Firestorm is in combat. If he fails, he may not use Dispersal, and he must enter hand-to-hand combat. Even if he succeeds, roll again to see if he uses his powers in a less than effective manner (such as creating a cage consisting of a giant wax pumpkin with the top cut off like on a jack-o-lantern).

During a terrorist attack on an experimental nuclear power plant, Professor Martin Stein and teenage jock Ronnie Raymond were fused together into Firestorm (I), the Nuclear Man.

As the nuclear-powered hero, they were members of the Justice League and worked as a team to defeat menaces such as Black Bison and Killer Frost.

As Firestorm, Ronnie’s red hair was floating in the air and on fire. He possessed a yellow and red costume.

As Ronnie, he was a teenager with red hair, and a football player’s body. Martin was an older man with black hair, slightly balding. He also wore glasses.

Ronnie was brash and fun-loving. He didn’t take having the Firestorm powers very seriously at first, but eventually grew to the responsibility. Martin provided a balance to Ronnie’s energetic personality, preferring to analyze the situation and think through any problems. Together, they made a very effective team.

Drawbacks:
Alter Ego: Controllable (Ron Raymond/Martin Stein), MPI (See Below), Secret Identity, SIA (poor use of powers, especially resorting to hand-to-hand combat and not using Dispersal), Loss Vulnerability (All powers but not stats, 0 AP range, extreme cold, only sometimes), Misc: Damage or poor health (being drunk, having a brain tumor, being a werehyena) on the part of Firestorm’s Alter Egos will have a similar impact on Firestorm (and sometimes vice-versa). Loss Vulnerability: Firestorm’s BODY is only 4 against attacks which Blindside him.

Bonuses and Limitations:
APs of energy absorbed via Energy Absorption may be added to the APs of any of Firestorm’s Burnt Out powers for the purpose of being able to change into Firestorm again ; Telepathy can only receive (and presumably transmit) feelings of pain from (and presumably to) Professor Stein.

Skills:
Acrobatics: 02, Scientist: 08 (Ronnie did not start with the Scientist skill, but Martin Stein’s brains rubbed off on him).

Drawbacks:
Alter Ego: Controllable (Firestorm I) (formerly Uncontrollable, as he did not know about Firestorm and suffered amnesia when Firestorm was formed).

Late in their career, Firestorm would suffer periodic “attacks” as a result of Stein’s brain tumor, during which he needed to maintain intense concentration or split into Ronnie and Stein.

This is represented by a Minor Psychological Instability. Should Firestorm ever roll a natural 2, he must make an Action Check using his Will/Will vs 8/8. If this check fails, Firestorm will split into his two personalities. See below for more details.

This power only works on inorganic material.

Helper(s): Based on a writeup by Danielle Mendus (using Who’s Who) ; KalEl el Vigilante, Eric Langendorff. 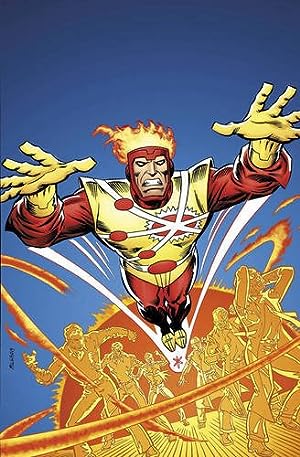 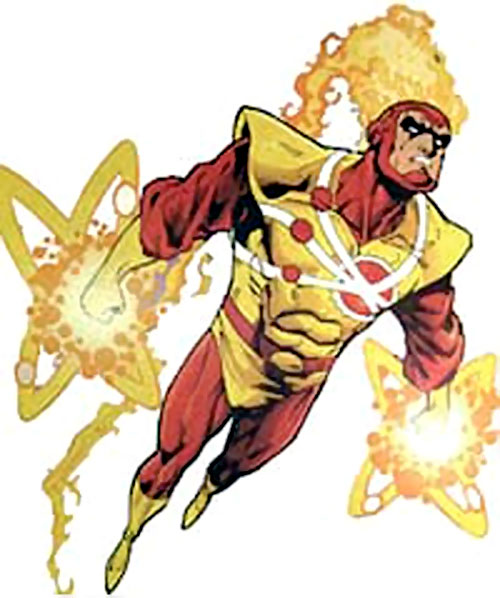 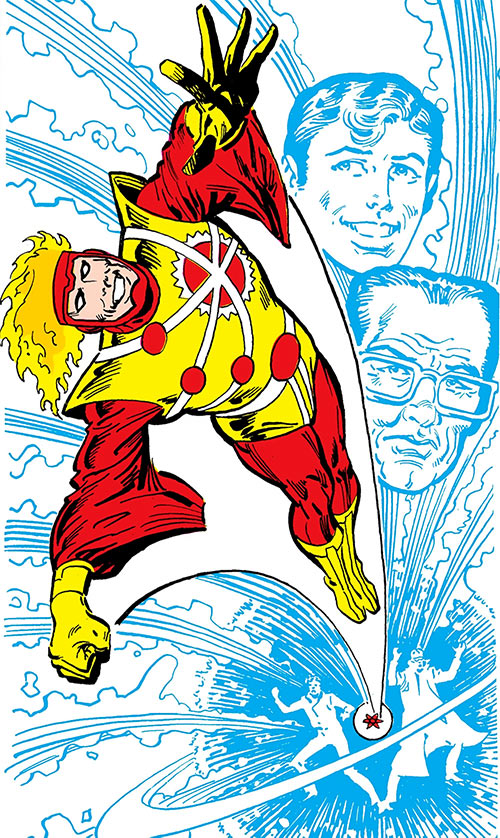 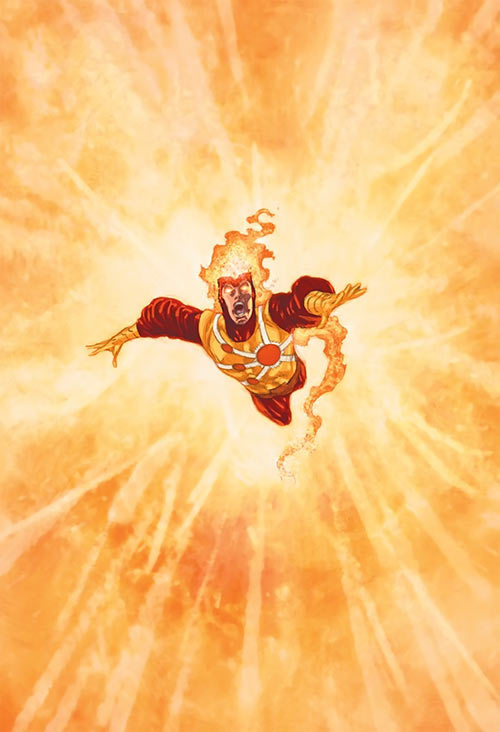