The Fisherman’s primary ability is his phenomenal skill with his unique weapons. He repeatedly snares Aquaman in his fishing line even when battling underwater where the advantage belongs to the Sea King.

On two separate occasions he has displayed strength sufficient to lift his prey (Aquaman and Blue Devil) off their feet with his rod. He appears to posses some skill in the design of his simple yet effective weapons and vehicles and is an excellent pilot.

He has used trained dolphins in his crimes.

In his first recorded appearance, mysterious seagoing criminal the Fisherman tried to net the biggest haul ever; “a whole civilization !” The civilization in question ? Atlantis !”

To this end, the sea thief sent his frog-suited henchmen to steal a new growth formula created by the elderly Professor Brant. Aquaman, who was visiting his friend the Professor, fought the frogmen. But he was inadvertently splashed with the formula and knocked unconscious.

Upon awaking, Aquaman discovered the professor dead. The excitement of the battle had been too much for Brant’s weak heart. He also discovered himself growing to gargantuan proportions. Lumbering back to Atlantis, he found it being torn out off its foundations by a Fisherman-enlarged jellyfish. Meanwhile, its criminal master cruised nearby in a strange manta-shaped sub.

Through a series of size changes by both the Sea King and his adversary, Aquaman defeated the Fisherman and his henchfrogs. The Fisherman was turned over to “upper-world authorities.”

Not long after, the Fisherman resurfaced as a member, along with the Invisible Un-Thing and Fire-Haired Karla, of the extremely short-lived super-villain team called the Terrible Trio. The Fisherman and his teammates were in league with an alien race they referred to as “Them”. These sought to conquer Earth but possessed a fatal vulnerability to water.

The Earth criminals were bent on exacting revenge on the world. It is never clearly explained why the Fisherman seeks revenge – perhaps for his incarceration. They were given a strange undersea satellite that created holes in the ocean. Naturally, this brought the Trio to the attention of Aquaman, Aqualad, and Mera.

After an initial skirmish that saw the Aqua-Family getting the worst of it, the heroes vanquished the villains. The Fisherman found himself trapped in his own fishing line by a rapidly swimming Aqualad.

This forced the hand of the aliens, who attempted to kill all six combatants. Aquaman and Karla teamed up to repulse the alien attack and the criminals were turned over to the proper authorities. The Fisherman had been netted once more.

Many years later, Aquaman stumbled across a drug trafficking operation using trained dolphins to deliver heroin to France. When the Sea King followed the drug runners back to their floating marina base, he was shocked to discover his old foe the Fisherman in charge. The sea criminal captured Aquaman and sentenced him to death in a vacuum chamber death trap.

As so often happens, the villain left the scene of his great triumph to attend to other business. This allowed the hero to elude his dire fate. Aquaman escaped the death trap and, after a brief running battle, defeated his enemy. The Fisherman was turned over to NATO.

Short weeks later, Aquaman discovered a gunrunning operation, headed by Black Manta. It was supplying underwater-modified laser rifles to Karshon. Karshon (actually the disguised Shark) had deposed Arthur as King of Atlantis and was plotting further woe for the hero.

Aquaman tracked Manta’s supplier to “A. Hobb’s Confederate Emporium”, a Civil War memorabilia factory just outside of Vicksburg, Mississippi. There he encountered the Fisherman. Using a booby-trapped dummy of himself, the villain captured Aquaman and put him in another death trap.

This time the Sea King was hung on an oversize fishhook and slowly lowered into a crossfire ring of laser rifles. Escaping this latest death trap, Aquaman defeated the Fisherman and left him wrapped up for the authorities in a Confederate Flag.

It wasn’t long before the Fisherman returned, this time in the employ of Kobra. Kobra, whose latest world domination scheme required the recovery of the sunken cargo ship the Bellerophon, hired the Fisherman. He was to supervise the salvage operation and eliminate a possible threat, Aquaman. 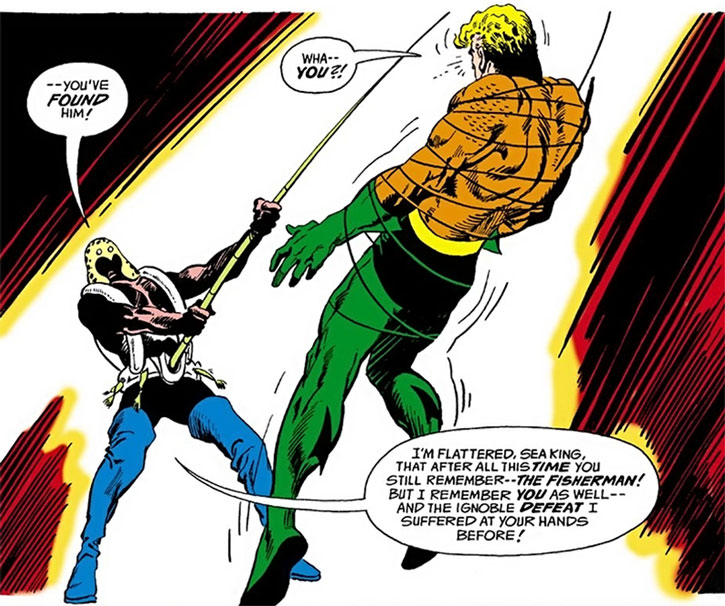 For the third time, the Fisherman captured Aquaman and stuck him in a death trap. This one had the Sea King strapped to a pair of solar collectors stolen from NASA. These were attached to the top of a lighthouse. When the sun rose, Aquaman would fry!

The Fisherman left the scene on further business for Kobra. What the Fisherman could not have known was that the lighthouse to which he chose to affix the panels was Arthur’s childhood home. Gaining strength from the memory of his father (and conveniently recapping his origin), Aquaman burst free of his bonds. He then tracked the Fisherman down.

During their subsequent battle, the Bellerophon was jarred loose from its precarious position on an undersea cliff. It descended rapidly into the deepest abyss. However, it was caught and stolen away from both hero and villain by the Scavenger’s Scorpion Sub.

Arthur suggested that he and the Fisherman team up to defeat the Scavenger. But the villain ignored both the Sea King’s idea for a temporary truce and Kobra’s direct orders. He attacked Aquaman vowing to, “get that blasted do-gooder off my back permanently !” He was soon defeated and delivered to NATO, once more.

It was several years before the villain returned. Howbeit, the Ocean Master did use a Fisherman robot during one campaign against his hated half-brother, Aquaman.

During the Crisis, the Fisherman finally resurfaced. This time he attacked a swank Hollywood party attended by Daniel Cassidy, the reluctant hero called Blue Devil. The Devil foiled the Fisherman’s plan to rob the party guests. He also defeated his bumbling fish-named and fish-suited henchmen (Monk, Whiting, Pollack, Calamari, ugh !).

More recently, Aquaman and Animal Man battled a super-villain called the Gamesman. Among the trophies seen in the Gamesman’s ship is the distinctive helmet and cowl of the Fisherman. How the Gamesman acquired this item is unknown. But the implication is that this new villain killed the Fisherman.

In his earliest battles with Aquaman, the Fisherman wore a bulky diving suit. Its segmented armor shell gave him the appearance of a humanoid lobster. This costume also included gloves, swim fins, a helmet, and the Fisherman’s trademark spotted cowl that kept the faceplate of the helmet in perpetual shadow. The entire ensemble was in deep purple with a fishing net cape.

His fishing rod in this incarnation resembled a lance with a flared hand guard and no external reel.

In later appearances, the Fisherman’s uniform became more streamlined. He added an oversize metal belt / shoulder harness and dark blue hip boots. His cowl became the yellow spotted version that he wore from then on and the color of his uniform lightened to a pinker shade. His fishing rod lost its hand guard but gained its telescoping feature.

In his battle against Blue Devil his costume once more became deep purple although it retained its streamlined look. Under his mask is a thuggish face with a black mustache.

But for his chosen milieu, the Fisherman would make an excellent addition to the gimmick-laden Rogues Gallery of the Flash. He is boastful and overconfident when winning but willing to beat a hasty retreat when things begin to go against him. In addition, he is fond of the sort of overblown death trap that modern super-villains rarely use anymore.

Able to devise and execute his own plans and schemes, he also has no problem taking a paycheck from someone like Karshon or Kobra. However, judging by some of the transmissions between them, the Fisherman seemed genuinely intimidated by the latter villain. Though he hates Aquaman, such hatred does not usually cloud his judgment the way it does Ocean Master’s or Black Manta’s.

In his battle against Blue Devil, the Fisherman displayed a truly out of character goofiness. He makes terrible fish-based puns, has one of his henchmen give him a verbal “Da Da Da Dum !” vamp before announcing his nom de crime. He even mentions hiring his gang out of something called “The Villain’s Gazette.”

“Your briny friends won’t save you from my wrath this time !”

If the Gamesman episode is to be believed the Fisherman is dead. But the cardinal rule of comics is: “no body, no death.” It is possible that the villain who battled Blue Devil was a former henchman who gained access to his boss’ weaponry while the Fisherman was in prison.

This would explain the Fisherman’s odd behavior during this encounter and might prove to be the individual killed by the Gamesman.

Once a reason for the Fisherman’s return is decided upon, he can easily be used as an enemy for a low-powered group of PCs. Or he could be a lackey of a major criminal for a campaign featuring a more powerful group. As long as the Fisherman stands to gain financially, he would be as likely to accept an assassination contract as rob a bank.

Note:
The number of times that the Fisherman has been captured would seem to preclude a Secret Identity yet his real name has never been revealed.

Note:
In addition to his more fantastic equipment, the Fisherman has used a number of mundane vehicles (helicopters, jet ski-like water vehicles, etc.) in his crimes. He can be expected to have some sort of escape vehicle prepared should he require one.

The Fisherman’s weapon of choice is a specially designed fishing rod. With this unlikely tool in his grasp, the Fisherman is a fearsome foe. He may use it as a whip, striking targets with the weighted lure at its end.

A Line Grapple is an attempt to use a lasso, length of chain, whip or similar rope-like object to grapple a target. Such an attack bears some similarity to a traditional Grappling Attack but differs in a few significant areas.

A Line Grapple Attack uses the attacker’s Exotic Weaponry Subskill as AV and the STR of the Line as EV, although GMs may rule that such an attack may be attempted with the usual Unskilled Use Penalties by characters who do not possess the Exotic Weaponry Subskill. OV / RV equals the target’s DEX / BODY while the Range over which a Line Grapple may be made equals the length in APs of the Line.

If this attack earns one or more RAPs, the target is grappled by the Line and takes damage normally. The effects of a Line Grapple are as follows:

If a target that has been Line Grappled has not yet acted during a Phase and has earlier declared that he would be performing an action which is now illegal, he does not get to act in the Phase at all.

Unlike a traditional Grappling Attack, both characters involved in a Line Grapple may use Ranged Physical Powers to attack any character in Range including one another. Hand to Hand combat and Powers that have a Range of Touch may only be used to attack each other although the attacker must still cover the distance between himself and his target in order to attack in this manner.

These attacks use the attacker’s DEX / STR (or APs of Power) as AV / EV and the target’s DEX / BODY as OV / RV as normal.

Additionally, characters that initiate a successful Line Grapple attack may attempt to use the Line to do further damage to the Line Grappled character in subsequent Phases. Such an attack is always resolved as a Trick Shot using the attacker’s Exotic Weaponry Skill / STR as AV / EV and the target’s STR / BODY as OV / RV.

A Line Grapple is also broken at the end of any Phase when all of the involved parties agree to allow the Line Grapple to cease. 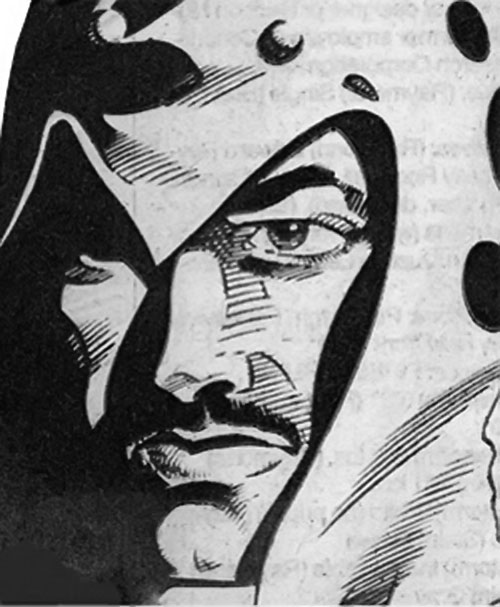