Streeter uses the F.I.S.T. power armor ; while it seems pretty powerful to him, it is actually typical of entry-level power armors, and less powerful than such armor as Guardsman suits in the Marvel Universe.

Frank Streeter was a self-employed inventor of electronic components, who had several of his patents stolen by a company called Newtronics to build the Flying Infantry Shock Troop (F.I.S.T.) power armor, an attempt to win an U.S.Army contract. Badly angered, Streeter sabotaged the project, stole the wreckage of the prototype and repaired it single-handedly.

Now, as F.I.S.T., he carries out vendetta missions against the U.S. government, the military and big business whenever he feels their actions are unjust or immoral. As a terrorist he’s hated by the public ; and villains distrust his motives and goals, making F.I.S.T. a hunted man by both sides of the law.

Only Mocker shares his attitude to a degree, and F.I.S.T. thus mostly works as a member of the Crushers.

The F.I.S.T. armor is coloured red, white and blue.

Streeter prefers to stay aloft, strafing at ground targets. When he must close he tends to gloat about the improvements he made on the armour and demonstrate the strength of the suit by using objects such as compact cars as weapons.

His pride toward the armor make him wary when it starts being damaged, and he’s likely to flee a fight if he thinks the suit might be destroyed. This overcome even his genuine, strong loyalty toward Mocker. 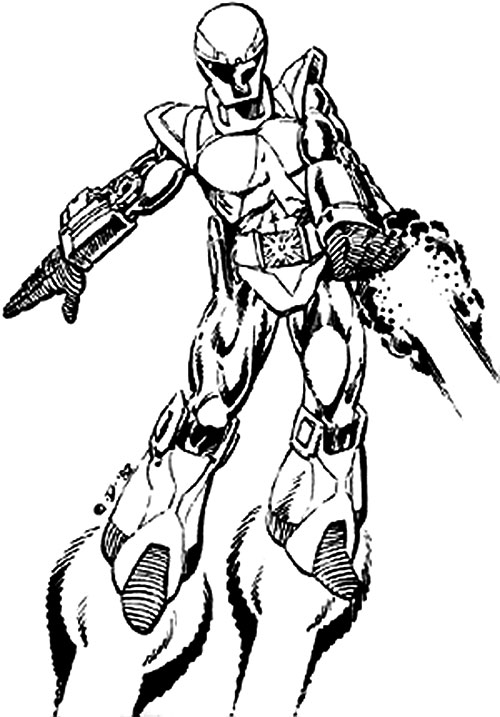