Fisto is a heroic warrior fighting alongside He-man in the 1983-1984 He-man and the Masters of the Universe animated series.

He is one of the series’ few heroes who began as a villain. And known for his huge mailed fist.

For more context, see our profile about the world of Eternia.

Fisto is a muscular warrior with an oversized right mailed hand. Punches from this hand can shatter boulders.

He travels through his forest by swinging on vines.

Fisto is an excellent trapper. He doesn’t build death-traps but instead predicts his opponent’s actions. This allows him to do things like put glue on a trail where his victims will walk.

He displays an aptitude for training wild animals. While evil, Fisto had an Arachna as a pet. 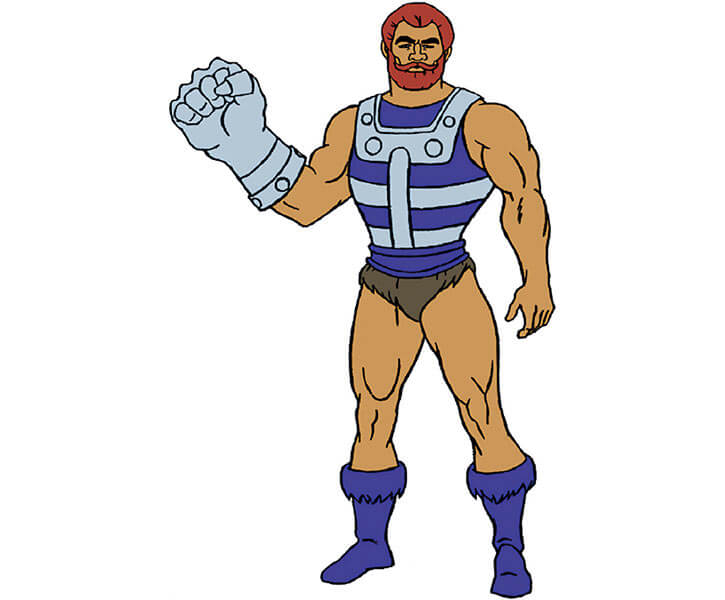 It all began a few years ago. Skeletor put the Elf-Lord under a spell and made Fisto ruler of his forest.

Fisto changed the course of a river, which in turn cut-off the waters from a large peaceful farming community. Locals began calling the forest, “Fisto’s forest”.

A young farmer sought revenge, for without water his people would starve. But Fisto had a pet Arachna, a huge evil spider. They had no trouble capturing the intruder.

The farmer’s young daughter fled to the Royal Palace and begged for help. Prince Adam, Orko, and Teela accompanied her to the forest. They were to rescue her father and persuade Fisto to free the river.

Will you walk into my parlor? Said the spider to the fly

Fisto spotted the heroes following his trail. He set a trap for them -a huge rush of water would wash the heroes into a small cave. A heavy log would then be dropped into the entrance, closing the cave.

Fisto’s trap worked. But when he dropped the log it inadvertently landed on top, pinning him. The water continued to rise and would soon drown them all.

The farmer’s daughter was small enough to slip out. She saw Fisto in his plight and helped him. She placed the end of the rope in his strong right hand so he could lift the log, freeing himself. 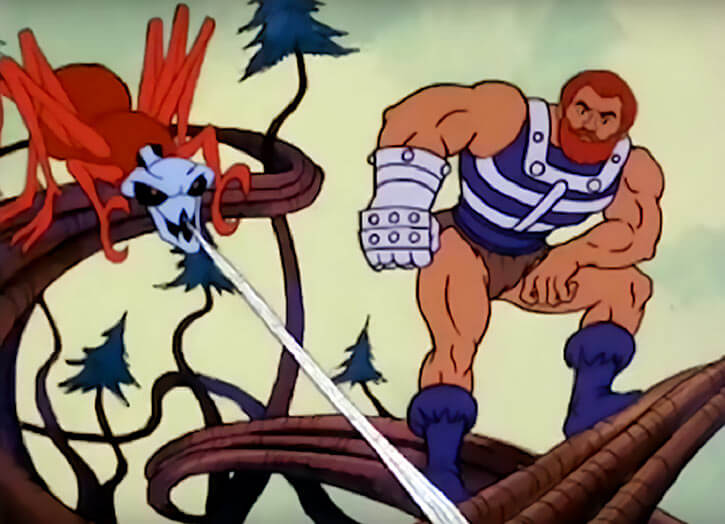 Amazed at the girl’s kindness, Fisto immediately changed his ways. He left Skeletor and became a champion of good.

Today, Fisto lives in that same forest, helping and protecting travelers. He can also be found at the Royal Palace aiding He-man and his friends.

An alien race called the Bendari visited Eternia. They wanted to understand the concept of Good and Evil.

They sought the most powerful individuals on the planet — one evil, one good — to compete in a game.

Prince Adam didn’t get a chance to transform into He-man. Therefore, the Bendari selected Fisto to represent good!

Fisto is extremely muscular, and speaks in an echoing voice.

His most notable feature is his oversized right hand. This hand is always in a gauntlet.

He wears a heavy blue and metallic harness. His shorts and boots are blue fur.

He knows he is stronger than others. Fisto used to use his strength to hurt others for his own gain. Shown compassion, Fisto now spends his days helping others.

Once he realized his past deeds were wrong, he became humble and worked daily to make amends.

Fisto has a deep respect for He-man. A steadfast ally. 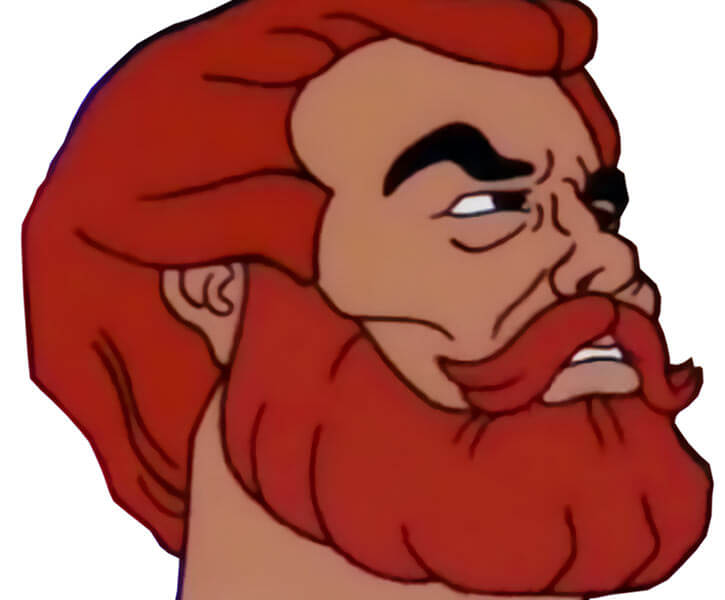 Boy: “Hey, thanks !”
Fisto: “Yeah, you’re welcome. Anytime I can give you a *hand* just let me know.”
He-man: “And when Fisto offers you his hand, boy, that’s a big offer.”
(Everyone laughs)

(The alien, Bendari, came seeking the strongest individuals to represent good and evil for their contest).
Fisto: “It should be quite a match. I only regret that it shall not be I who will represent the side of good.”
Orko: “How can you be so sure ? I mean you’re really powerful.”
Fisto: “Hehe, perhaps little friend, but no. The Bendari will only have one choice when the time comes to choose someone to represent all that is good on Eternia. And that choice will certainly be… He-man.”

Fisto could have fought against Black Panther before seeing the error of his ways. This would place Fisto’s Forest near Wakanda and make him a Black Panther ally.

In Fisto’s origin story we learn he had a trained giant spider called an Arachna.

The stats for Fisto’s Arachna are the same as the average Arachna found in the Eternian animals of the Masters of the Universe profile.

The Arachna are always evil-aligned. So, when Fisto became good the spider became his enemy.

During his career as one of Skeletor’s warriors Fisto lived in a cave and had a crystal ball. The latter doubled as the Elf-lord’s prison. Fisto abandoned these and his evil Arachna when he became good.

Fisto’s motivation was Mercenary until the farm girl’s compassion changed him.

Source of Character: The 1983/1984 animated series He-Man and the Masters of the Universe. Fisto voiced by Lou Scheimer.