The Flag-Smasher is in excellent physical condition. Furthermore, he is a gifted hand-to-hand combatant with great proficiency in the shotokan ryu of karate, as well as in wielding his trademark spiked mace and most kinds of guns.

He’s also a brilliant terrorist strategist and an excellent linguist.

(From the Marvel SAGA Avengers Roster book ) :
The man who would become the Flag-Smasher followed his Swiss diplomat father around the world. he watched him try to forge unity through diplomatic means. In his travels, he picked up half a dozen different languages, plus a black belt in shotokan karate . Flag-Smasher was set to enter college and follow in his father’s footsteps.

All of this changed when his father was killed in a riot outside the Latvian embassy. Then Flag-Smasher saw that his father’s peaceful, passive means of bringing about world unity had been unsuccessful. In a world that only understood violence, he would become a violent agent of change to show humanity its fractured folly.

Adopting the guise of Flag-Smasher, he set out to destroy symbols of nationalism. He would show people how foolish and fragile they were to hang separately.

His tirade culminated in a clash with Captain America (Steve Rogers), when he took an auditorium full of people hostage right where Cap was lecturing. Captain America defeated Flag-Smasher, who was deported back to his native Switzerland.

However, he surfaced again on various occasions, even taking control of the terrorist group ULTIMATUM. He also fought along with Captain America when it was revealed that the Red Skull was the secret backer behind ULTIMATUM. Flag-Smasher has rebuilt the terrorist organisation since – without Nazi stakeholders.

Among Flag-Smasher’s moments of glory : he actually beat U.S.Agent and left him to die in a frozen pond (U.S.Agent survived). And it was during a fight against Flag-Smasher that Captain America had to grab a gun and shoot an ULTIMATUM agent who was going to spray automatic fire on a crowd. It was the only time Cap had to take a life since WWII, and it’s still haunting him.

He wears a simple black and white costume leaving only the lower half of his face bare. He has an Earth emblem on his belt, and carries ammo and fuel supplies on his back.

Flag-Smasher is extremely committed, even fanatical, about his goals. He intends to destroy all physical symbols of individual nations, so that people may begin to understand the necessity of a united world. When Flag-Smasher is around, no monument or national emblem is safe. 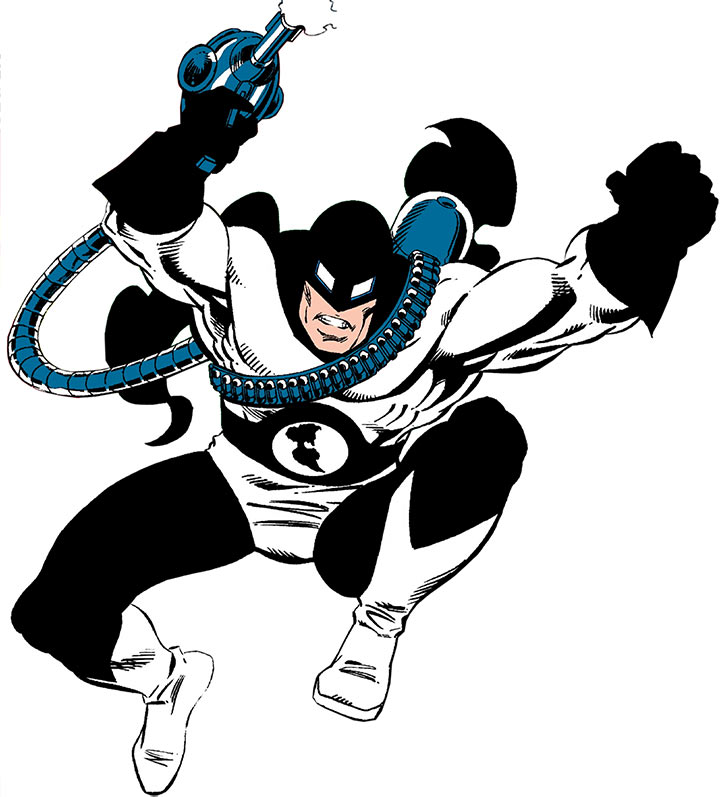 At first, Flag-Smasher was portrayed as being ready to commit any heinous crime for his goal. He constantly spouted rhetoric and too far gone to be reasoned with. More recent portrayals have been more open-minded.

Depending on your opinions, Flag-Smasher may be one more heinous terrorist killing moms and apple pies and stealing candy from babies, or an intelligent, if fanatical, man asking good questions through wrong means.

(To Captain America) “I despise you for your fanatical devotion to your ideals. I hate that you have proven my physical superior twice now. I don’t deserve a foe as… *grand* as you. *You must die*”.

In the DCU, Flag-Smasher could become a hero of sorts if he discovered the existence of American Scream (from Shade). In that case, he might believe that nationalism is a tangible, mystic force that can be fought directly and destroyed.