The Flame is a skilled criminal, motorcyclist and driver. His foremost skill is arson. The Flame can efficiently destroy buildings using fire, accelerants and some prep work.

The Flame always sabotage all nearby fire fighting equipment, telephone lines, police boxes, exits, etc.. He ensures that fire engines will be alerted as late as possible, to maximise the damage and (in most cases) the loss of lives.

His main asset is his distinctive equipment :

The Flame is one of the top arsonists for hire on the West Coast. When encountered, he was working in San Francisco for a landlord called Crowley, as part of an insurance scam. One of the tenants put at grave risk by this plot was Alison Blaire – the Dazzler.

Blaire saved all people endangered by the fire. The situation then escalated, since she mistakenly thought the fire had been started by her enemies Mystique, Destiny and Rogue. Dazzler contracted the Heroes for Hire (Luke Cage and Iron Fist).

Enraged by having been foiled, the Flame set fire to the recording studio where she was working. The Heroes For Hire’s actions helped prevent a tragedy.

Dazzler then accidentally exposed Crowley and the Flame. She was captured and left to die in the Flame’s next blaze. But she freed herself and defeated the Flame, who was taken in police custody.

See illustration – conveniently displaying both the Flame and his bike.

The Flame seems somewhat psychotic. He enjoys his work, and consider himself a lord and master of his trade, the rest of the underworld being péons.

Toughness, efficiency, class, living out revenge fantasies and proving himself top dog are constantly on his mind.

He’ll almost instantly reach zealous hatred of anybody who interfere with his plans, and target that person for death. He doens’t care about any accrued damage to buildings and innocents.

(About his bike) “It’s elegant, and efficient… like me.”

He would have made for an excellent encounter for Flamebird back before Titans West.

Drawbacks:
SIH of anybody who thwarts his plans. 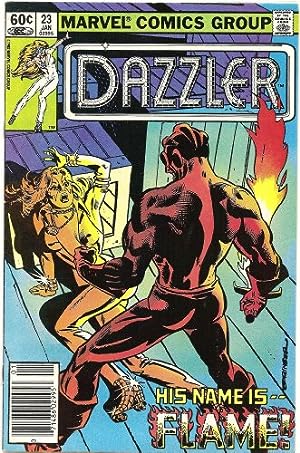