Somebody is bound to need such strange creatures for a game. And thus here they are – Fantomah wills it !

Flaming Claws are enemies of Fantomah. Fantomah probably was the first super-powered comic book heroine, and was one of the features of Jungle Comics during the early 1940s. Yes, *all* the stories in these comics were about the jungle.

“Flaming Claws” are chemically-created creatures of an unclear nature. Apparently they are an animated liquid compound within a coherent, solid body – perhaps loosely comparable to the Elements of doom in the Marvel Universe, or some of Diablo the Alchemist’s creations.

They were created by a genius nicknamed Angel Eyes. His parents had died during a scientific expedition in the jungleland overseen by Fantomah. Though it was a freak accident, Angel Eyes remained convinced that his parents had been murdered by unknown parties. He swore that he would destroy the entire jungleland in retaliation.

After years of work he produced a batch of Flaming Claws and sent them out, causing widespread carnage and terror. Fantomah stopped them, executed Angel Eyes and broke down the Flaming Claws into their constituent chemicals.

Another mysterious adventure of Fantomah in the next exciting issue. It’s a thriller !

At first, the Flaming Claws appear to be just that – a pair of red, disembodied, burning clawed hands. These are gigantic, large enough to grab an adult male lion or attack an elephant. Flaming Claws can kill most persons and animals within seconds, and move faster than almost any man.

An important edge of the Flaming Claws is that people assume that they are indeed disembodied hands – and do not attempt to attack their invisible body where it should logically be (in DC Heroes terms, they are attempting Trick Shots to hit the hands, without any upside). This also suggests that the Flaming Claws also have a surprisingly light footfall.

Of course, Flaming Claws are probably huge and thus resilient to common weaponry. The body of Flaming Claws may also be more resistant to injury than a normal organic being’s.

At one point Fantomah neutralises the power of the Flaming Claws. Their hands remain red, clawed and visible, but no longer flamed on. Perhaps the fire is a sort of exhaust from the thermogenic reaction powering them.

The Flaming Claws seem to be about as smart as frenzied attack dogs, and there were about 6 or 8 of them.

In the DC Universe, broadly-similar events could have occurred but with the Spectre replacing Fantomah.

In the Marvel Universe, they could have been an early Mad Thinker plot, using some extra Unstable Molecules stolen while building the Awesome Android to create some extremely rough copies of the FF – giant hands like Reed, some flame like Johnny, enhanced strength like Ben and invisible like Sue.

Perhaps these were later found and unleashed against Brother Voodoo, who magically extinguished their flame and thus shut them down.

Bonuses and Limitations:
Thief solely to reduce noise and tracks from footfalls

Flaming Claws could easily have further resistances and vulnerabilities depending on their actual chemical makeup. However, we have no information about that, as Fantomah easily defeated them by kicking them in their weak Mental and Mystical Attributes – circumventing their physical might.

The Self-Link (Water animation) is a marker for that – it’s there but the game effects are not really defined. Just adjust them depending upon the role you want them to play in your campaign, the power of the Player Characters, etc. 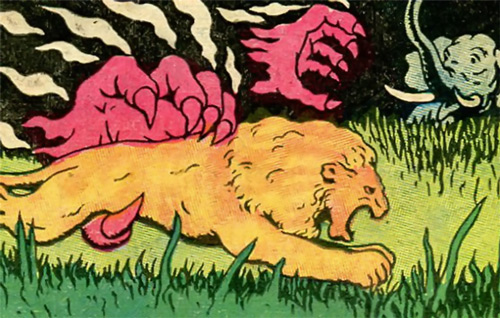