Flamingo is a nearly unstoppable combat machine. He’s proficient with all sorts of weapons, can withstand an unbelievable amount of pain, is extraordinarily strong and can seriously threaten even world-class hand-to-hand fighters.

Flamingo’s tactics seem to be a mix of terrorism, pragmatism and sadism. When detailed to kill the Red Hood, he ambushed the vigilante and his sidekick from his parked bike with a sniper rifle, seriously wounding his target. He then came in to finish off the Hood and Scarlet, which he likely deemed to be less dangerous. 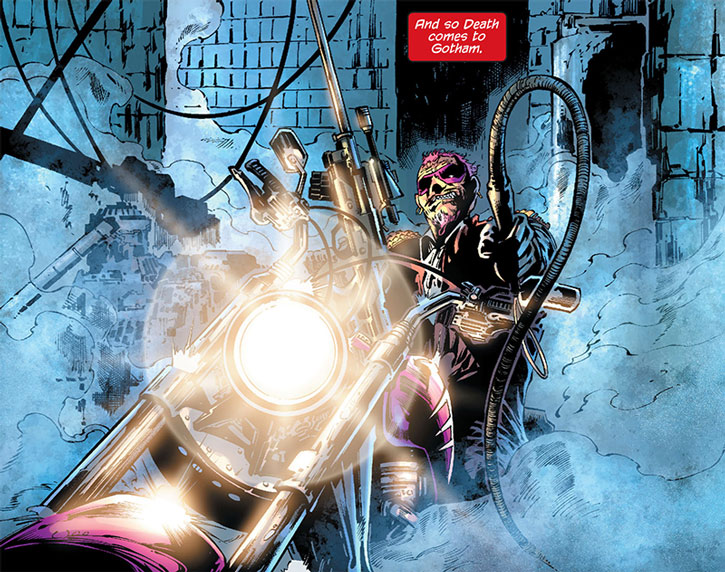 Though he might be closer to being an animal than a person, he has genuine tactical acumen and fights in a hard and cunning manner.

This entry assumes that his ravaged brain afford him a high level of psychic resistance (in DC Heroes RPG terms, Mind Field), since this is usually how it works in comic books.

Eduardo Flamingo is remembered as a man who fought the mob. That presumably took place in Mexico (and I’d assume he’s in fact a Mexican citizen), though in which capacity is unrevealed. Perhaps he was an activist, a journalist, an untouchable cop or judge, or something along those lines.

The underworld eventually nabbed Mr. Flamingo. It was presumably El Penitente, a cartel boss, who decided that one of their most determined opponents would become a symbol of fear for the cartel, and their most terrible servant.

Criminal surgeons went to work, killing selected areas of Mr. Flamingo’s brain. They created an utter monster, worse than death itself and beyond most definitions of criminal insanity. El Penitente had his new enforcer tested by having him kill Sr. Flamingo”s wife, his children, and everybody else he ever loved or valued.

Flamingo then became the alpha enforcer of the cartel, working everywhere the cartel did. The legend of the inhuman, grotesque Flamingo grew quickly. He became feared throughout the underworld as he left hundreds of corpses behind him.

During the late 2000s the resurrected Jason Todd, formerly Robin, stalked Gotham as killer vigilante the Red Hood. He recruited a sidekick, Scarlet, and started eliminating criminals in talks with El Penitente’s Mexican cartel. This affront could not go unpunished, and the Penitente sent the Flamingo to Gotham.

Due to the terrifying reputation of Flamingo, the move did not go unnoticed. The GCPD even managed to find Flamingo’s plane, though a bit too late. The enforcer was already in Gotham’s streets, leaving the boys in blue to deal with the sickening horrors they found inside the jet.

Flamingo hit the Red Hood hard, severely wounding Jason Todd. He would have killed the Hood and Scarlet hadn’t Batman (Dick Grayson) and Robin (Damian Wayne) intervened. Even this went badly, though. Robin was shot six times and left paralysed, and Batman found himself in a precarious position. 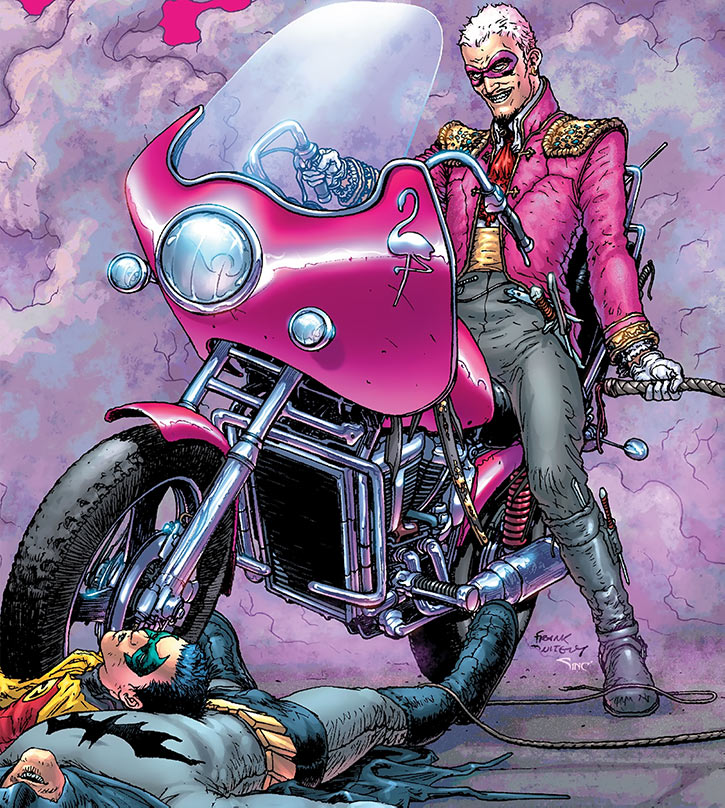 Running on adrenaline, the Red Hood used nearby machinery to try and dispose of Flamingo. Though he managed to take him out, no body was found and it is likely that Flamingo survived.

After the fight was done, Scarlet fled town and apparently managed to get out of the vigilante scene. As for Robin he received extraordinary medical care arranged by his mother, and his destroyed spine was replaced.

Sr. Flamingo is no longer a man. He’s an utterly psychotic, trepanated thing, damaged beyond what any human could be through natural circumstances. He’s a cunning but bestial killer who cannot even speak. He seems to take immense pleasure in violence and murder, ignoring his own pain as he grunts and giggles.

What makes sense to Flamingo is utterly warped. His look is based on phonetic associations on his own name (a flamboyant aspect that seems to draw from a torero’s costume, a fixation on various shades of pink, and certain “flaming gay” aspects taken from exaggerated, self-caricaturing 1980s performances – plus body art). What he finds interesting is also likely to be utterly depraved and deranged.

Flamingo eats faces. Usually those of young, pretty women, and he seems to go through a lot of those. He skins his victims alive himself (though they usually die in the process), and eats the epidermis served as in an expensive restaurant. This probably means something to him, but what it could be is unfathomable.

Bonuses and Limitations:
Mind field is Self Only, Form Function and Always On. 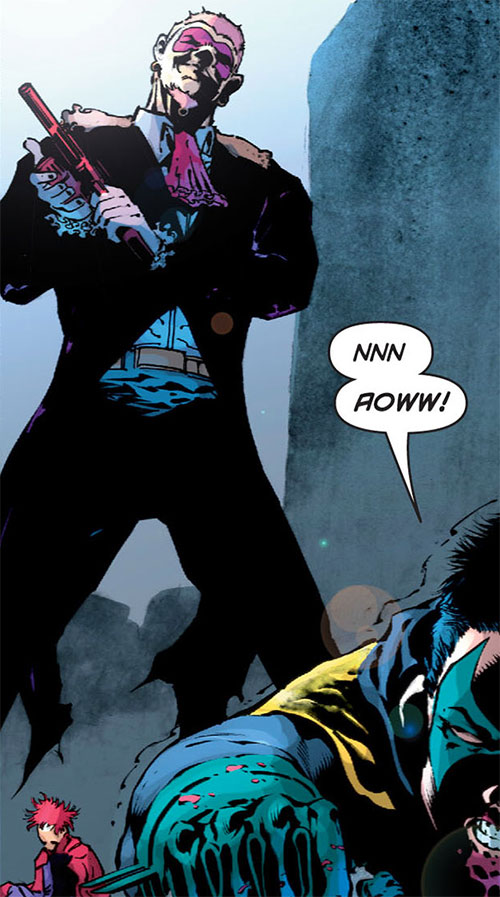