The Flash possesses the power to move at superhuman speed, and can attain velocities equal to the speed of light.

His superhuman endurance enables him to run great distances without tiring (this speed and endurance diminished somewhat with age).

He also possesses an aura of unknown energy that protects him from friction heat and the other adverse effects of movement at super-speed.

The Flash also has absolute mental control of his body atom’s and molecules. He most often uses this power to vibrate his atoms at such high speed that they can slip past the atoms of solid objects, enabling the Flash to pass through such objects without damaging them. He can also travel to other dimensions through varying the vibratory rate of his atoms.

The Flash can also vibrate his clothing or even another human he is holding through a solid objects or into another dimension.

In 1940, Jay Garrick was a graduate science student at Midwestern University. He worked closely with Professor Hugues on a compound called “hard water” – which clearly was much more exotic that what is commonly called hard water (i.e., water with a high mineral content such as calcite).

He was also on the university’s gridiron football team. But as a perennial bench-warmer nicknamed “Leadfoot” since his speed and accuracy were not the best.

One of Jay’s life ambitions was to woo one Joan Williams. But both Joan and her father Major Williams felt that his mediocre athleticism meant that he wasn’t man enough to marry her.

During a long night of chemical experiments with “hard water”, Garrick accidentally broke a beaker. The fumes knocked him out and he was left breathing them all night long. Hugues and his colleagues quickly established that the student was now a freak of science, since “hard water” was known to super-accelerate human metabolisms.

(If you like linking vintage stories together (à la Roy Thomas  or Wold Newton ), “hard water” could be a variant formulation of Gibberne’s Accelerator, featured in a HG Wells novella.)

Jay indeed demonstrated massively superhuman swiftness as soon as he got out of the hospital. He promptly used his newfound speed to single-handedly win a seemingly lost football game for Midwestern. Joan agreed to a date. 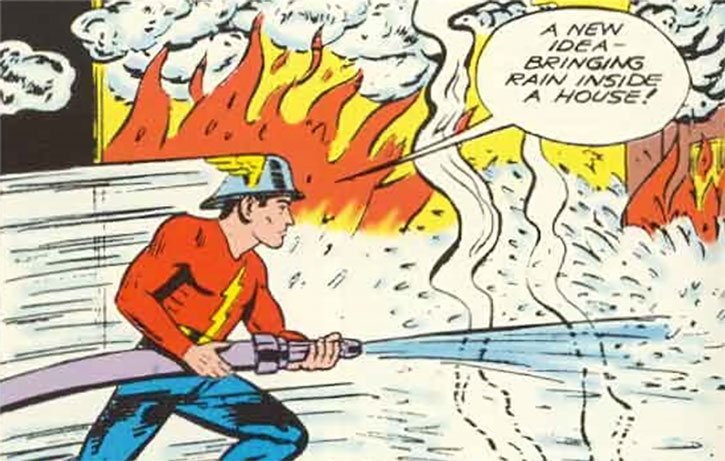 A few months later Joan and Jay graduated from their physical science program. Jay moved to New York’s Coleman University as an assistant professor. Reading news about racketeers eluding the police, he created the Flash identity – visibly based on Classical Mercury/Hermes imagery.

When gangsters kidnapped Major Williams to extort the secrets of the “atomic bombardier”, Joan requested Jay’s help. She correctly assumed that Garrick’s superhuman speed was the safest way to rescue her dad. The Flash defeated the mobsters called the Faultless Four and saved the Major. Joan readily agreed to keep Jay’s secret.

They resumed dating and soon became a couple.

Unlike many “Mystery Men”, and relying on his immense speed to obscure his unmasked features, the Flash fully collaborated with the authorities. He was even deputised by the Keystone City Police Department.

While the mission failed, other heroes came to the rescue and helped save President Roosevelt from a flight of valkyries. This heroic assemblage became the Justice Society of America, and would later join a greater force called the All-Star Squadron.

The Flash left the JSA in 1941, and wasn’t as active as other wartime heroes. However, he participated to the missions to foil Ian Karkull in late 1941. During this case both he and Joan were exposed to chronal radiations that greatly prolonged their youth and vitality.

Garrick was also a regular member of the Keystone Liar’s Club, who challenged each other to credibly tell tall tales. Jay often won by simply telling his adventures as the Flash. During the war years the Flash repeatedly clashed with such villains as the Shade (Richard Swift), Rag Doll (Peter Merkel) or the Thinker (Clifford Devoe).

By 1945 Jay rejoined the JSA full-time, as he had become and independent researcher in Keystone. By this point he and Joan were engaged, and they married in 1948. More clashes with notable villains took place, including the Golden Age Star Sapphire, the Fiddler (Isaac Bowen) or the Thorn (Rose Canton).

After his marriage Jay retired as Keystone City’s protector, as another hero called Alias the Spider had emerged. Unfortunately, the Spider turned out to be a criminal as he betrayed the Seven Soldiers of Victory, and Flash returned to protecting Keystone. 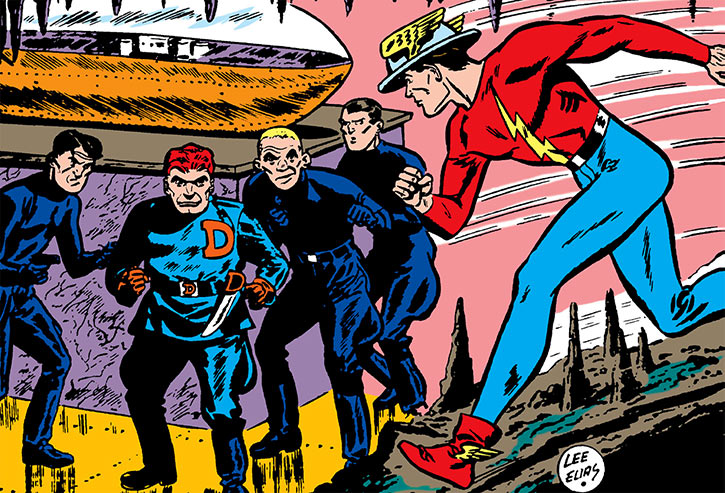 In 1951, the Flash and his JSA colleagues refused to reveal their identities to answer the House Un-American Activities Committee’s accusations, and disappeared.

A decade later three of Jay’s enemies — the Fiddler, the Thinker and the Shade — kidnapped the whole of Keystone City, including the Garricks. This was sensed on Earth-1 by the Flash (Barry Allen), who came to the rescue. The Flashes of two Earths released the Keystone citizenry, and Garrick returned to active duty.

(There were several accounts of this landmark Flashes of Two Earths story due to the various DCU continuity upheavals, but this remains the core of the case).

Due to a plot by Vandal Savage, the Justice Society then returned on action on their native Earth-2. They would regularly team up with the JLA of Earth-1. Beyond resuming fighting many of his aforementioned classic villains, Jay also teamed up on his own with Barry Allen, since the two men could easily jump from one Earth to the other.

Into the Bronze Age

Garrick eventually revealed his identity in a We magazine article in the late 1970s, whilst remaining a highly active JSA member. During the Crisis on Infinite Earths he was one of the Earths’ core defenders. He thus could remember the old multiverse even after reality was realigned and the planet became New Earth.

Soon after the Crisis, Jay and the JSA left for Limbo where they would fight forever to stall Ragnarok. Joan was incorrectly informed that her husband had been killed in action.

Years later, the JSA was able to return from Limbo and found a changed world. They continued to be active, and Jay also mentored the current Flash (Wally West). He even briefly joined the JLA.

During the Zero Hour crisis, the JSA was devastated by the villainous Extant, who greatly aged many of its members. Garrick announced his retirement. However, the Speed Force had protected him from ageing, and he eventually returned to action.

The “Golden Age Flash” continued to associate with Wally West, and in 1948 celebrated his 50th anniversary with Joan. He even occasionally resumed being Keystone City’s main defender.

In 1999, the death of Wesley Dodds marked a new beginning for the JSA. Jay and the rest formed an expanded roster that included the inheritors to their various 1940s legacies, and the Society returned stronger than ever.

Jay Garrick is a classic Golden Age hero: intelligent, determined, and responsible. When he gained his powers, he instinctively knew that he had to use his new-found abilities for the common good.

Like many of the Golden Age heroes, his attitude and actions have served as a model for the succeeding generations of heroes. Though he has seen many tragedies in the course of his career, Jay still has a light side and delights in his heroic pursuits. This is especially true when he is working alongside his JSA companions and associates and his fellow speedsters .

In his later years Jay is serving not just as a hero but also as a mentor to many of the heroes that have followed in his footsteps. He has taken on this role in a paternal (but never condescending) way. He quite often works alongside the current Flash and has an active role in the new JSA, providing support, encouragement and wisdom.

Compiled by Sébastien Andrivet (using World at War and Who’s Who). 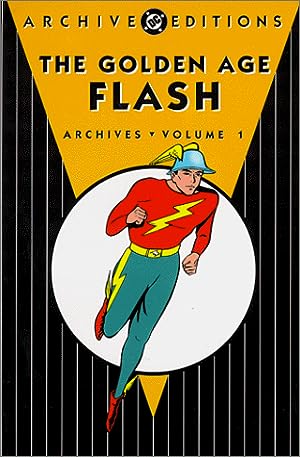 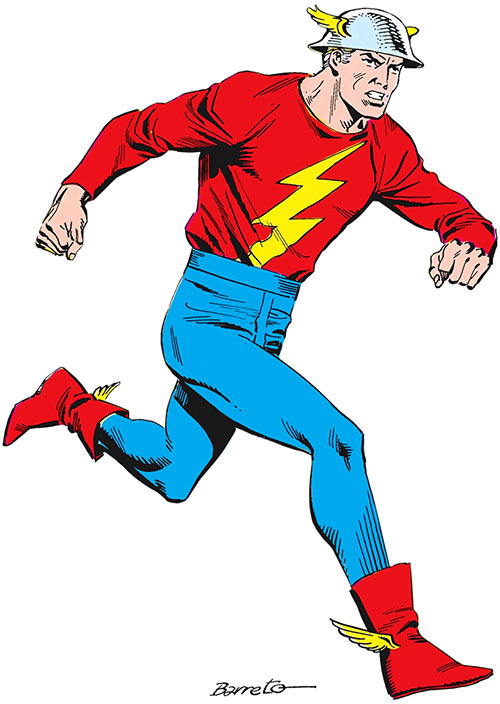 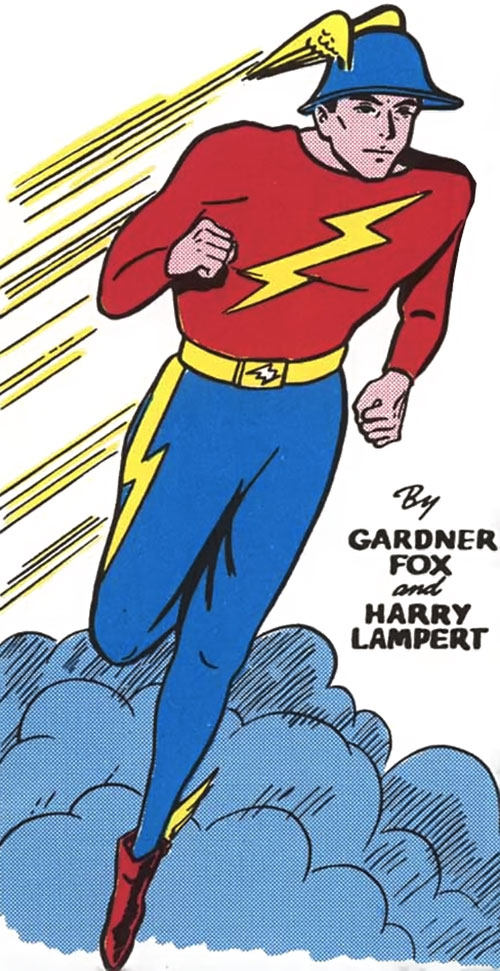