Flash IV inherited her connection with the Speed Force from her father. Like him, she is able to move and run at tremendous speeds.

She is very skilled in using her speed but has never had any formal training. Therefore, she is unable to perform power stunts such as creating whirlwinds by windmilling her arms or the like.

Iris Margolin West only ever wanted love and attention from her father. But Wally was too busy saving the world 24-7 and was never much of a father figure. Her adoption of the Flash moniker was without his permission and apparently without his notice, as he never spoke with her about it.

In order to strike back at Wally emotionally Iris joined Batman’s New Titans, clearly drawing the battle lines between them. Iris participated in the battle at the Gulag, where she was killed by the nuclear blast.

In another corner of the Hypertime  where the Gulag was never built and the confrontation never occurred, Iris was recruited by Rip Hunter. She then traveled back to 1998 and confront Gog.

She also made a wrong turn in the time stream recently and scared the bejezus out of Wally West in the middle of a crucial battle. She may show up again as the Cobalt Blue legacy unfolds.

Flash IV is an attractive 16 year-old girl who wears a costume very similar to her father’s Kid Flash outfit. Her sleeveless top is yellow with a red lightning bolt. Her pants are red with yellow bolts down the sides and she wears red booties. Both these design elements are reminiscent of Jay Garrick’s early costume.

Iris wears a black leather jacket over her costume, and finishes the ensemble with red stylin’ sunglasses.

Flash IV is spunky and determined. For most of the time of Kingdom Come she is angry with her father, and does her absolute best to prove to him (and to herself) that she is worthy to carry on the Flash name. She even died carrying the wounded off the field of battle at the Gulag rather than run to safety herself. 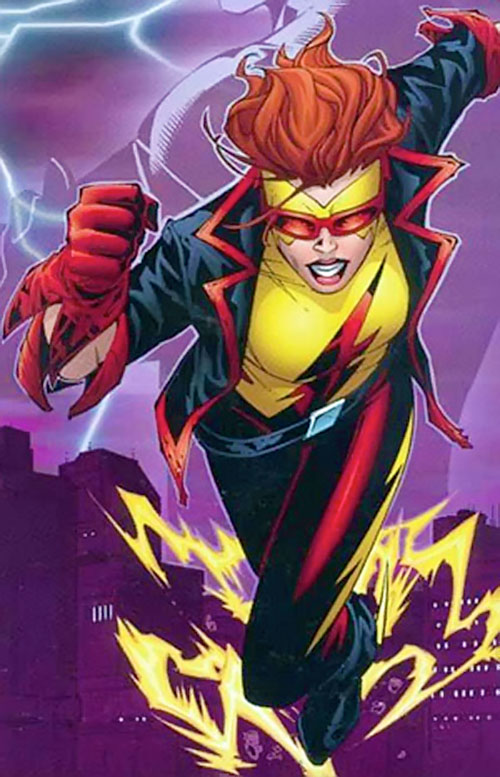