Mostly forgotten publisher Ace Magazines did pulps  during the 1930s, and comics during the 1940s and 1950s. Most now know of their work indirectly, when their Doctor Nemesis character became public domain and was reinvented as Marvel’s Doctor Nemesis.

Writeups.org contributor Sean took notes for a few Ace characters. These include Marvo the Magician, (F)Lash Lightning and Magno the Magnetic Man.

“Flash”/”Lash” Lightning and Lightning Girl were endowed with typical electricity-based powers. Such as the ability to generate lighting bolts from their hands.

Trained in all the ancient and modern sciences, young American Robert Morgan was given great powers by the Old Man of the Pyramids. He used these powers to fight crime as “Flash” Lightning. This was the background for the character when he first appeared in Sure-Fire Comics no.1.

Later, in Lightning Comics vol. 2 no.2, the character was renamed “Lash” Lightning, and the Robert Morgan identity abandoned.

In vol. 3 no.1 of the same title, Lightning Girl made her debut. She was Isobel Blake, who shared similar powers and wore an almost identical costume, but with a skirt. Lightning and Lightning Girl were described as a “famous crime busting team.” There was no longer any mention of the Old Man of the Pyramids.

“Flash”/”Lash” Lightning and Lightning Girl were endowed with typical electricity-based powers, such as the ability to generate lighting bolts from their hands, as well as flight and increased strength. The strip ran in all 14 issues of Sure-Fire/Lightning Comics, as well as issues 1-22 of Four Favorites.

He wears a red long-sleeved shirt, green tights, silver belt, red briefs, orange gloves, and orange boots with black ribbons tied around it in an archaic fashion. On his right arm, he has a green armband with a yellow lightning design.

His chest symbol is a large yellow triangle with a lightning bolt shooting from each side. His red-haired head is uncovered.

Bland superhero. Unwilling to stop an enemy army if it means that one woman would die.

Flash Lightning could fly off to Korbal with Lightning Girl. Their descendants would one day devolve into the Lightning Beasts that gave the Ranzzes their powers. His costume is reminiscent of Lightning Lord’s, so he might have inspired Lightning Lord’s fashion sense.

Alternatively, they could be antecedents of Lightning (and Thunder), the Electrocutioner(s), or Jonni Thunder’s alien thunderbolts.

Connections:
The Old Man of the Pyramids (High). 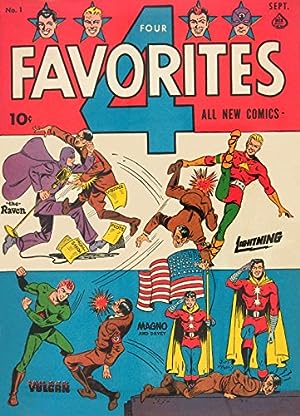