The Flash can run at the speed of light, and be anywhere on Earth in the blink of an eye. She is so fast she can run on water and doesn’t leave footprints on more solid ground. The Flash is surrounded by an anti-friction aura that protects herself, her costume and whatever (or whoever) she is carrying.

Her metabolism seems to be enhanced to the level of a professional athlete as a side effect of her powers.

Mary is still discovering her abilities – she has yet to sub her Superspeed for her EV, for instance. For now she mostly focuses on her Air Control ability, allowing to act indirectly and without coming too close to her opponents.

Like most comic book speedsters , she doesn’t create a wake, a sonic boom or any other environmental catastrophe when she runs at physically impossible speeds.

Mary Maxwell was a beautiful, perky undergrad. But her brilliant, reclusive father was a workaholic. Though he loved her and cared about her, he was absent-minded and engrossed in his work – cutting-edge DNA research. This left Mary lonely, bored and having to run the house by herself.

This dullness was shattered when killers from the international criminal organisation STEALTH came to the Maxwell home. Their mission was to kidnap Mary’s father and kill any witness. Philip Maxwell was expecting them, however. Unbeknownst to his daughter, the oblivious genius had clashed with STEALTH before.

Mr. Maxwell activated mechanical traps throughout their house. The Maxwells fled in their old station wagon, which included jet motors hidden in the trunk.

Maxwell explained his flabbergasted daughter that STEALTH was after him to advance their time-travel research. His genius-level DNA manipulation expertise could design or strengthen organisms so they could survive the terrible stress of time travel.

The Maxwells fled to Australia. Once there Philip bought a new house and installed new high-tech traps. However, STEALTH was now firmly on their trail, and found them again.

The Maxwells escaped again. But while at sea in their getaway motorboat crossed a strange green mist. The fog was somehow permeating the water, and numerous dead fishes were floating on the surface. Intrigued by the phenomenon, Mary tried to get a closer look at a fish, but the choppy water threw her overboard.

Her father quickly fished her out, but Mary’s skin had gone green and she was frozen stiff. Fortunately, her normal skin tone and body heat came back within minutes. However, there were severe after-effects. The youth was now as slow, sluggish and tired as if she were in her 80s.

As the Maxwells came back to the US to throw STEALTH off their trail, her father tried numerous means, not all of them scientific, to cure his daughter – to no avail.

As he was walking in the garden, the researcher came up with a desperate notion. He would use hummingbird DNA to concoct a genetic cure for his daughter. Soon, Dr. Maxwell had a test drug that could accelerate a person’s metabolism like the bird’s.

Mr. Maxwell started injecting the torpid Mary with a small dose of the viral agent. However, STEALTH killers burst into their house and fatally shot him in the back. The shock had him reflexively inject the entire content of the syringe into Mary’s arm. With an unexpected burst of super-speed, Mary then neutralized the attackers.

After mourning her father, Mary started testing her newfound powers. A super-heroes comics fan, she decided on a proper costume and name – the Flash. Her first adventure led to the apparent destruction of STEALTH.

Mary’s subsequent exploits resulted in a fly-by-night publisher launching a comic book dedicated to the Flash, which she loved. She thus was her own biggest fan.

The Flash has been a member of the JLA since. She has fought against the Doom Patrol, Reverend Darrk and against the all-powerful Crisis.

The coloured ribbons trailing behind her head induce a “rainbow trail” effect when she runs at superspeed.

Mary is a clever, dynamic 18-year old. She is a bit clumsy and has dorky interests – she’s a lifelong super-hero comic books fan and has an interest in science. But she’s also she’s bouncy and quite popular in college.

Mary is very excited to have super-powers. She really really wants to be a big-time super-heroine, like in the comics. She thinks most things in the funny books could work in the real world. Thus she “knows” what super-heroes should stand for, why they should form super-groups and why teamwork is important, etc.

Her passion for comics also armed her with a collection of okay Silver Age -ish one-liners.

Mary reacts with flashy bravado whenever somebody implies she’s not fit to be a big-timer.

Technically, she’s a Valley girl. She can indeed occasionally come across as somewhat wide-eyed, over-enthusiastic and superficial.

“When I was running that lap before… I met myself coming back… before I started. That means — for a split second — I ran faster than the speed of light !”

“Y‘know, this is just like in the comics when the good guys come together !”

The “half-Fatiguing” Limitation simply means that the APs used are divided by two, rounding up, when testing for the Fatiguing Limitation. Thus full-bore use of her Superspeed at 12 APs means a Fatiguing effect at 6 APs against her BODY of 05.

Mary will tire at the same rate as a top athlete when running, fighting, moving around, etc.. Although this can be played up in-game due to the nature of her power, this is just flavour and has no game effects on its own. 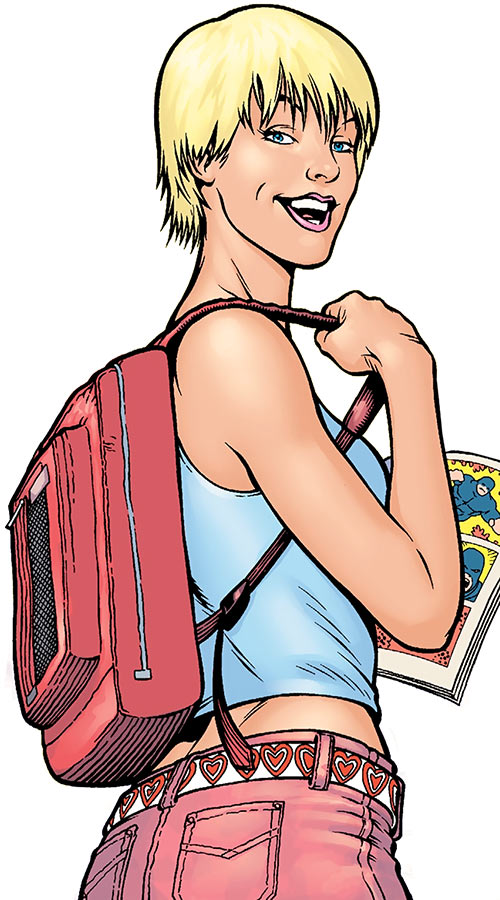 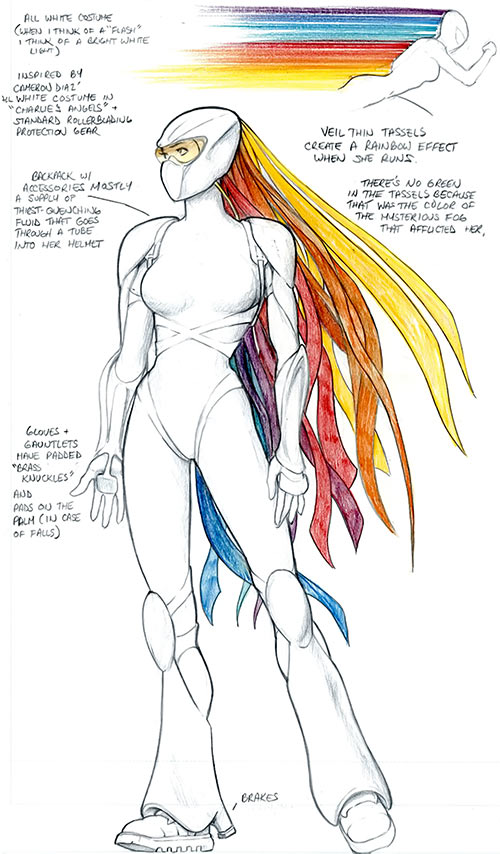 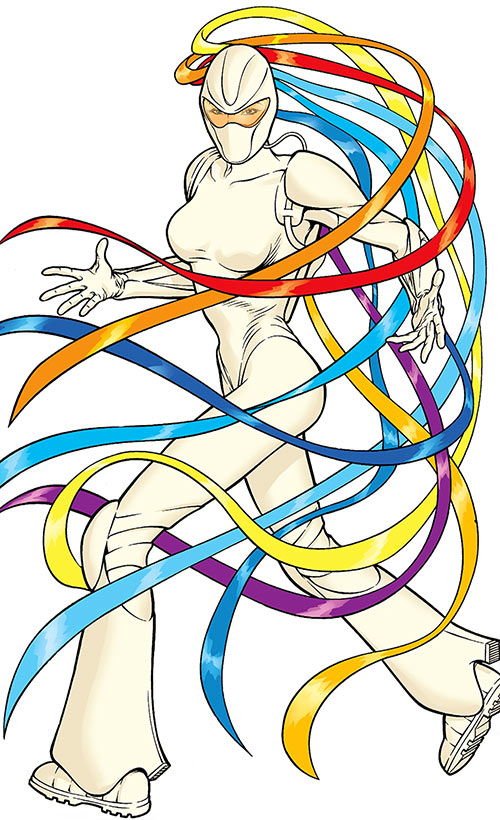