Flash is the fastest man alive. He can run close to the speed of light, side-stepping the laws of physics by tapping into the extra-dimensional energy known as the Speed Force. He also possesses a “frictionless aura” which protects him and the environment from the intense effects of his speed.

Wally’s control over the Speed Force allows him to perform several stunts. By moving body parts (or himself) at superspeed, he can create giant whirlwinds and vortexes. By vibrating his molecules at certain frequencies, Flash can wiggle them through solid material, allowing him to pass through solid objects.

He can also leave Speed Force energy in whatever he passes through, causing the object’s molecules to speed up and explode. He can lend Speed Force energy to other people and objects (if they’re already moving), and recently learned to steal speed from objects. By pushing his speed, he can break the “time barrier” and time travel.

Since this entry is chiefly a game stats modernisation one we’ve not written a history. A good one can be found on the site Flash: Those who Ride the Lightning , by Kelson Vibber.

Wally stands roughly 5’11”. He has auburn/red hair and green eyes (blue in the silver age). He is in his mid- to late-twenties.

Wally is a mid-western boy, born and raised. He’s the most down-to-Earth member of the Justice League, and often keeps the most human perspective on their universe-spanning adventures.

Having been a hero his entire adult life (since he was 14), his experience precludes him from being overwhelmed by the insane, mind-bending events of his day-to-day life.

Wally is completely devoted to his wife, Linda. She is his anchor, and he uses his love for her as an “anchor” whenever he is travelling through time, Hypertime or the Speed Force.

Advantages:
Area Knowledge (Keystone/Central City Area, Earth), Attractive, Insta-Change, Lightning Reflexes, Miscellaneous (Flash’s wife Linda provides him with a reason to come back to her as well as an “anchor”; he reduces the penalty to resist the Speed Force by -2 CS and can navigate through other dimensions and the timestream with a -2 CS OV/RV bonus), Scholar (speed force, physics).

When Wally first became Kid Flash, he had Air Control 08, Dispersal 12, Flame Immunity 12 (with the listed “frictionless aura” variation), Skin Armor 02, and Superspeed 20 as his only powers (Air Control and Dispersal had the last limitation listed above).

Sometime before the Crisis, Wally learned that his Superspeed was slowly killing him. If he actively used any of his powers for more than a few minutes, he used the APs of time he has been using them as EV versus his Body as RV in an automatic Killing attack. His Resources were rated at 03 APs at this point (04 after he joined the New Teen Titans).

After the Crisis, Wally’s powers stabilized, but he found he was much slower than he used to be. At this point, his only powers were Superspeed 10 (which he could not push) and Skin Armor 02. Whenever he used his Superspeed, he burned calories at an unbelievable rate.

Every time he used his powers for more than a few minutes consecutively, he had to make an Action Check using the APs of time as the AV/EV and his Body/Body as the OV/RV. If the check earned 1 or more RAPs, he had to immediately stop and eat or his powers would all burn out.

Thereafter, at each moment the total APs he used his powers increased, he would have to make another check in the same way. He could spend Hero Points on his OV/RV as usual. 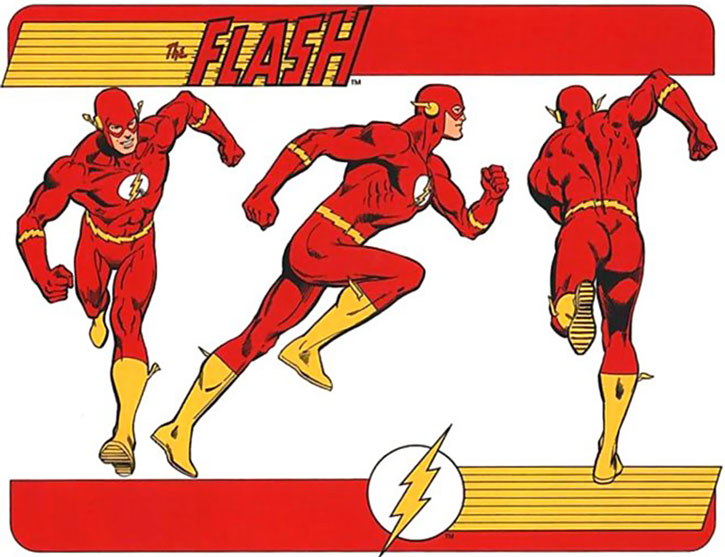 Shortly after Legends, Wally won the New York state lottery and his Resources increased to 11. By Millenium, Wally lost all his money, reducing his Resources to 03.

After Flash vol.2 50, Wally’s Superspeed was rated at 14 APs (since Flash v2 50) and he regained his fine control, enabling him to use Air Control 08. He created a new costume [Body 06, Flame Immunity 06 (with frictionless aura bonus)]. At this point, his Resources are 05 APs.

After the Return of Barry Allen, Flash pushed his speed to the limit in the battle with Professor Zoom. His Superspeed was then rated at 25 APs, and he also had Air Control 10, Skin Armor 02, and his innate frictionless aura was rated at Flame Immunity 11.

During Zero Hour, Wally accomplished what he then thought was impossible: Light Speed. He managed to attain a speed of 29 APs (the speed of light). He developed the “call of the Speed Force” limitation detailed above (though he actually had it all along, this was the first time he discovered it).

The limitation worked in the same way, except the initial OV/RV to resist suffered +2 CS to the OV/RV. He also developed his Danger Sense and link to Linda (the “Anchor” advantage described above).

After returning from the Speed Force, Wally’s Superspeed was rated at 26 APs. He gained the “lending speed” Bonus listed above, his Air Control was raised to 13 APs and his Flame Immunity was raised to 12.

Wally also relearned the trick of vibrating his molecules to pass through objects (Dispersal rated at 13 APs), but the amount of Speed Force he normally called on excited the molecules of anything he passed through, causing it to explode.

In game terms, he automatically attacked anything he passed through using the Dispersal attack detailed in the rulebook. Wally never took damage from this attack, only whatever he vibrated through.

Wally’s powers continued to develop. After a fight with the Suit, he learned how to coalesce Speed Force energy into a form of matter, which he later used to create a new costume (the one listed above).

During the “new Flash” story, Wally learned to “steal speed” from his doppleganger Walter West (he gained Neutralize at 28 APs with the listed limitations).

Wally also found he could Time Travel by pushing his abilities to their limit. He could control the amount of Speed Force his body used, allowing him to vibrate through objects without damaging them (unless he wished to).

By Danielle Mendus (using Who’s Who and JLSB). 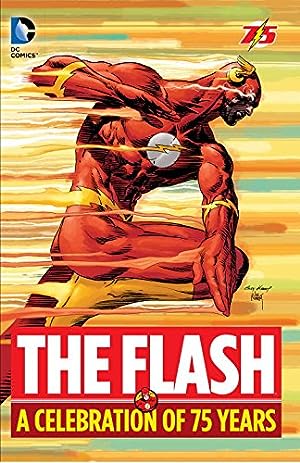 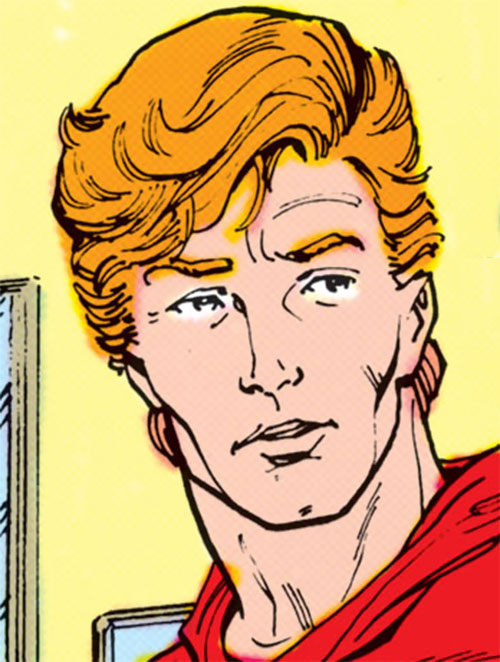 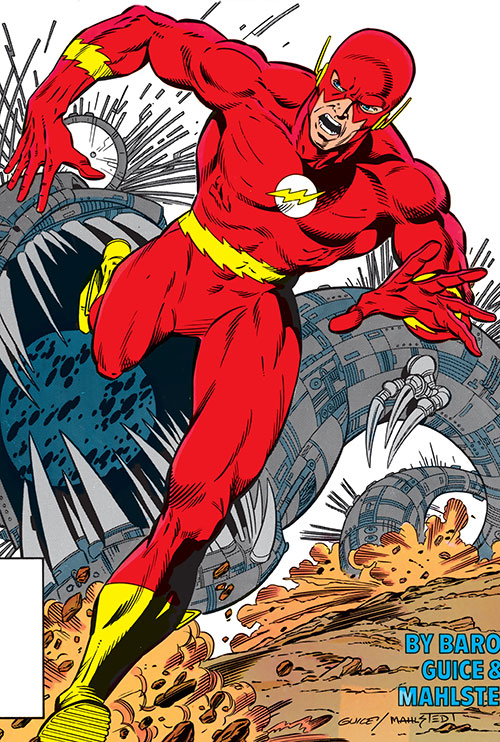 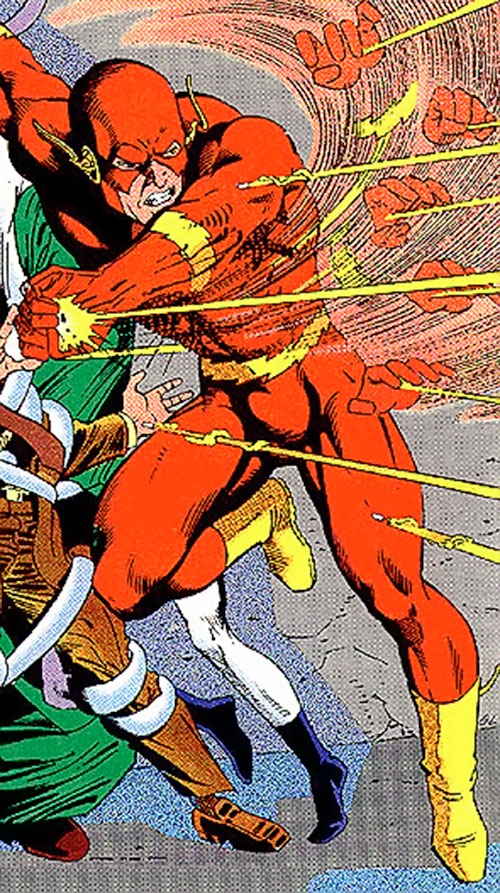 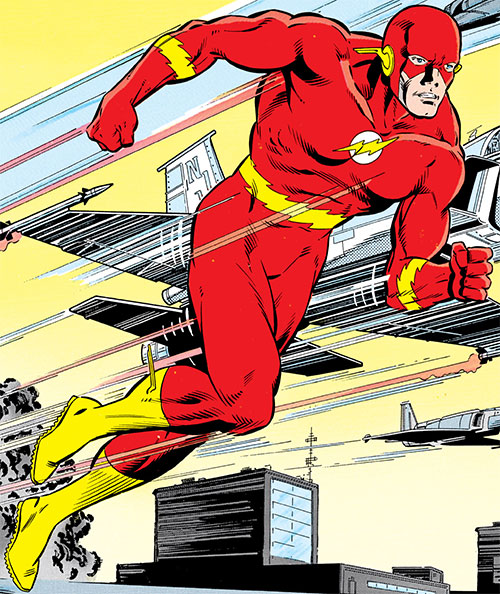 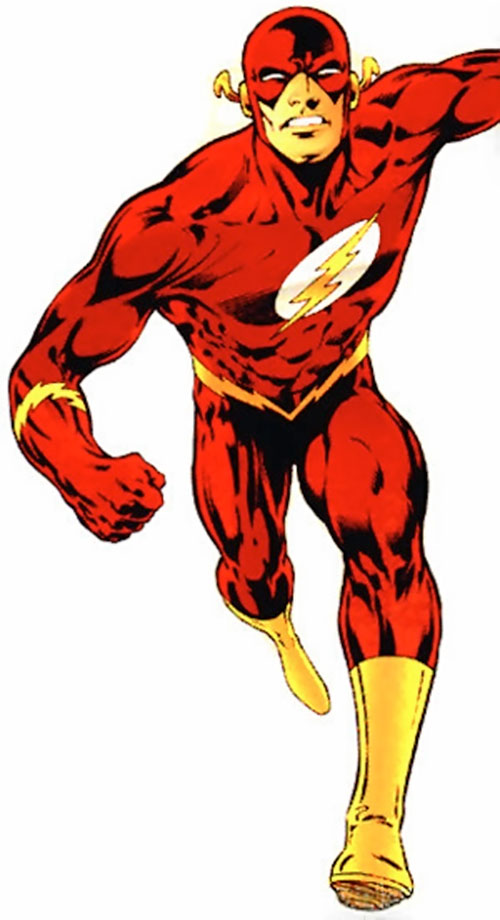 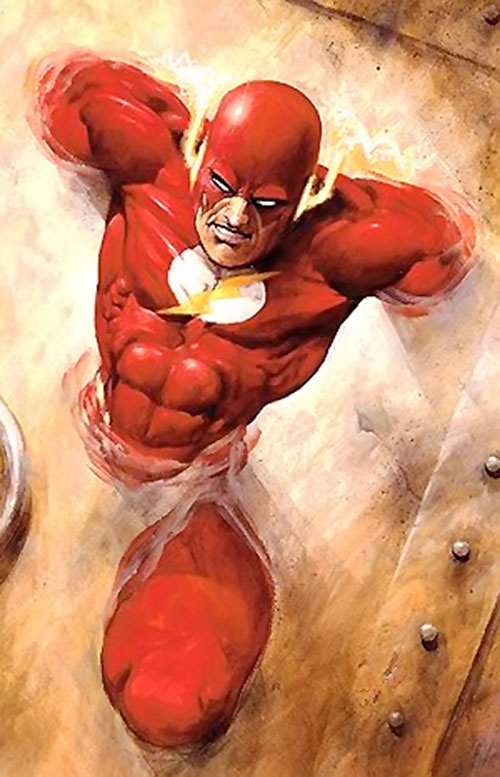 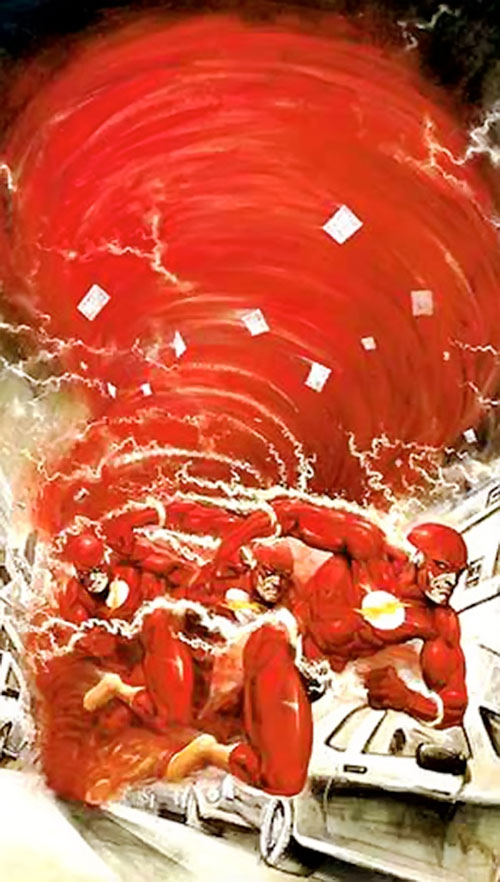 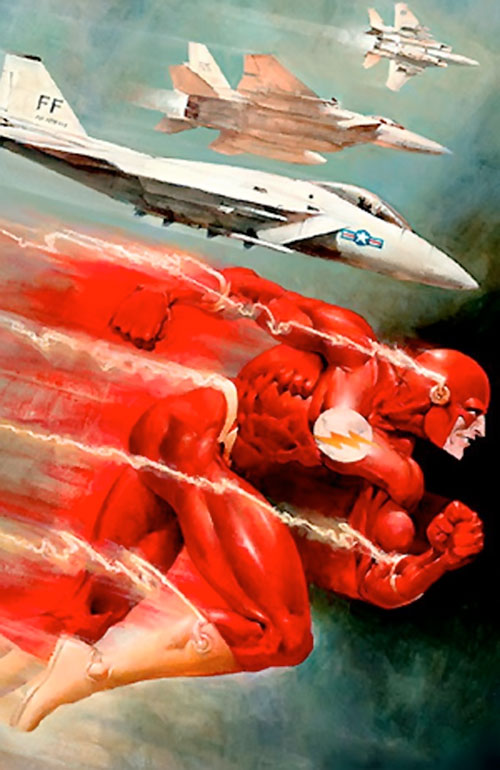 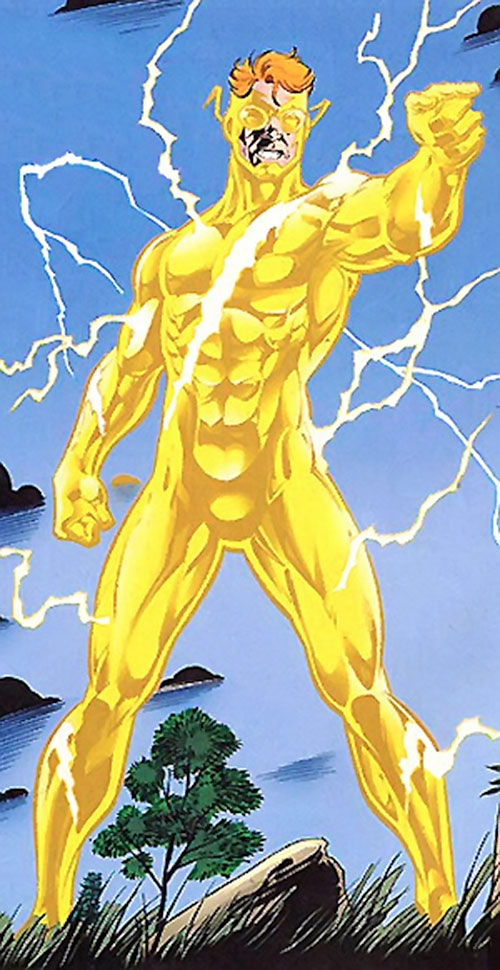 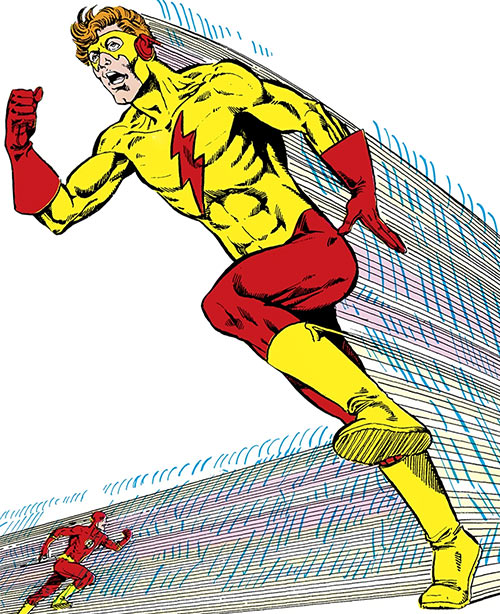