Flashback is a Bang Baby. That is, a gang member who received superhuman powers in the wake of the Big Bang. The Big Bang was supposed to be a rumble between all of the major gangs of Paris Island to settle their turf wars, once and for all.

However, the Dakota City Police Department learned of the impending showdown and developed a special tear gas that also contained a radioactive marker. Their plan was to use the gas to break up the Big Bang and then trace the gang members down the next day by tracing the radioactive “tags.”

Instead, most of those exposed to the tear gas died. And the handful of surviving gang members that lived had all developed superhuman abilities.

One of the Bang Babies, Rolando Texador, took the name Tech-9 after his favorite type of pistol. He gathered his fellow survivors together with a proposal. Tech-9 wanted to form a new gang, the Blood Syndicate, with the aim of achieving substantive positive social change. They took over an abandoned door factory, which they simply dubbed The Factory.

The gang’s all here

Operating from The Factory, the Blood Syndicate smashed crack houses throughout Paris Island, trying to rid the neighborhood of the dealers while taking the money captured in these operations to fund their activities.

In the course of their work they would acquire new members, and put an end to many threats in Paris Island. Flashback and her brother, Fade, were two of the founding members of the Syndicate.

During her time with the Blood Syndicate, Flashback struggled with an addiction to crack, worsened by the stresses of her work with the Syndicate. She also trapped herself in a self-destructive relationship with Holocaust, another Bang Baby and occasional rival of the Syndicate.

In the course of their work they would acquire new members, and put an end to many threats in Paris Island.

In the wake of the original Syndicate’s disbanding, former Syndicate member-turned-criminal Holocaust began forming a new Blood Syndicate. This one was more sympathetic to his schemes. He recruited several villainous Bang Babies as well as some former members of the first Syndicate.

He then arranged a confrontation with Icon to remove that hero as an obstacle to his plans.

This process was hindered by Starbreaker’s attempt to steal Dharma’s powers and is thus on-going. Dharma stated that it would be months, if not years, before it was complete (this was likely also a metatextual statement on the incorporation of the Milestone characters into DC Comics’ mainstream titles).

Flashback is a beautiful young Hispanic woman with dark skin. Her costume consists of a pink bodysuit accessorized with a padded vest, boots and gloves, all in purple. Her civilian attire usually incorporates the same colors.

The first picture is a rather early Flashback ; on the second one she’s a bit older.

Sara is a very caring person who wants to see others live well. She cares deeply for her brother but chafes under his over-protectiveness.

She engages in extreme behavior at times while out partying to escape the stresses of her life ; it was this habit that led to her addiction to crack.

“You don’t have to live like an animal anymore. You’re better than that.”

The Big Bang and the Blood Syndicate can dropped into any urban area where gang activity plays a major role. Flashback and her brother Fade could be encountered individually, perhaps as metahumans who acquired their powers during one of DC’s numerous temporal disturbances (The Crisis, Zero Hour, the upcoming Crisis in Hypertime, etc.).

Advantages:
Area Knowledge (Paris Island), Attractive, Expansive headquarters (The Factory, though the Blood Syndicate may have a new base of operations after its disbanding and subsequent reformation), Language (Español). 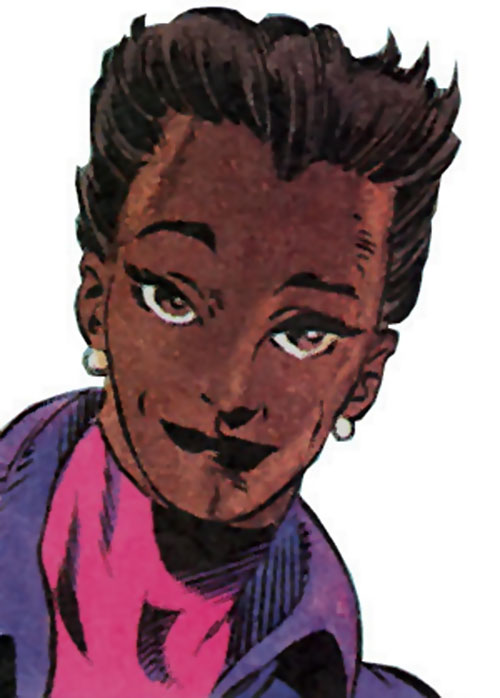 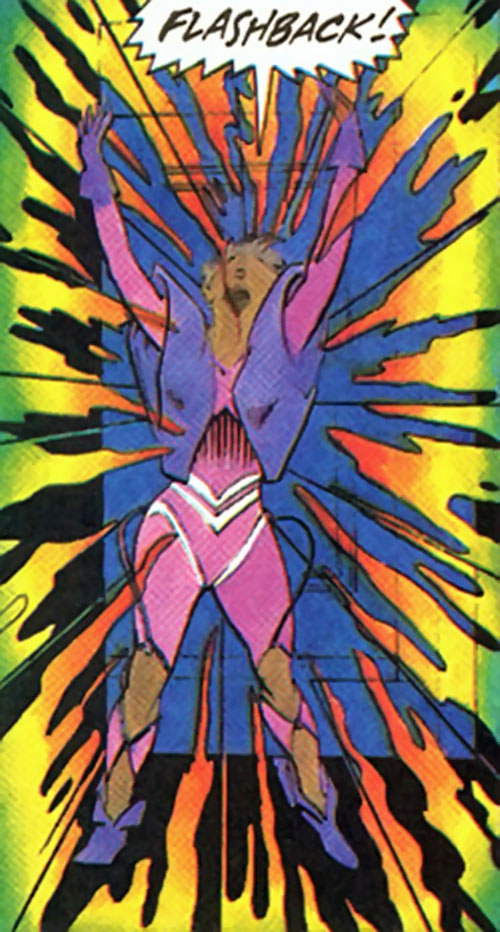