Flashpoint’ power is to fire concussion energy blasts from his eyes. The best part is that he can make the beam follow any path he desires.

He also has a top combat and investigation training.

Flashpoint joined the rank of StormWatch with Battalion and Nautika. He was drafted by John Windsor, who hesitated between Battalion and him for the leadership of the team. His bad attitude made Windsor select Battalion. That’s one of the reason Flashpoint held such a grudge toward Jackson King.

The other reason goes back to the Gulf War. This is when he, Nautika and Sunburst were captured by the MERCs. The rest of StormWatch Prime (namely Battalion and Backlash) thought they died in the explosion of a bomb. In fact, the prisoners were sent to Gamorra, where the Daemonite Lord Defile brainwashed them to make them double agents.

When StormWatch 1 freed them, it didn’t settle the issue. Flashpoint never forgave Battalion for leaving them in Kuwait. Nevertheless, he respected StormWatch and Bendix’s authority when acting under the leadership of Battalion. Still, whenever feasible, the Weatherman arranged to assign the two of them on different missions.

After their release, the trial of fire for StormWatch Prime was the exposure of Defile’s plan to bomb historical monuments worldwide. Since they worked out well together, Bendix estimated they were combat ready again, and teamed up the three of them. However, the missions they were given involved more investigation than actual combat.

Flashpoint later went on a personal crusade to settle the score with the MERCs. He killed Kilgore, and nearly slew Deathtrap. The villain was about to reveal that Defile had been holding them in Gamorra to brainwash them, when Sunburst and Nautika arrived and took him into custody.

Flashpoint was guilty of breaking several StormWatch rules. As a result, he was sent to jail in StormWatch’s detention center in Terra de Fuego.

When Al Fathal threatened to bomb three major cities, the Weatherman out of available agents. He thus let Flashpoint out of jail, to find and rescue StormWatch rookies captured by the Islamist militants. Using reckless violence and torture, Flashpoint did the job – killing at least one informant in the process.

Nevertheless, Bendix sent him again on an investigation mission. This time, he was to find the murderer of the Russian representative on the UN’s security council. The first suspect was no less than Winter. In the end, suspect and investigator teamed together to solve the case.

Flashpoint was killed during the “Fire From Heaven” episode. StormWatch didn’t mourn him. Only Battalion felt uncomfortable because he was under his responsibility.

Flashpoint is a tall man with blue eyes and a short, blond military cut. He wears large blue goggles that seem to have to do something with his optical beam.

He always shows a bad attitude. Though he respects Bendix’s authority, and would follow his orders, he’d always do it in his personal, violent way. He is ruthless, and wouldn’t hesitate on torturing, either physically or psychologically, to get his information.

Needless to say, it’s better to avoid leaving him in the same room as Battalion. Doing so has led to brawls in the past.

He’s a sworn macho, showing no respect for women, not even his team-mates. We can honestly say that the man has no honor.

“The only real waves are in Australia.” 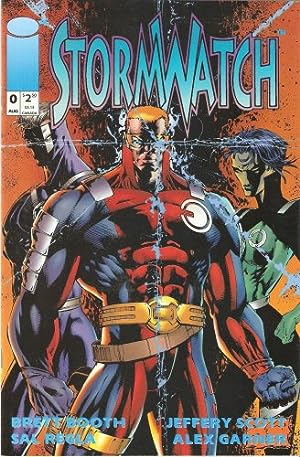