This writeup is based on the 1985 movie Fletch, starring Chevy Chase as an investigative reporter with a quirky sense of humor.

Fletch is a phenomenal improvisational actor. He’s capable of passing for virtually any part, anywhere. This his primary tool for acquiring the information he needs for his stories, and for escaping potentially lethal situations.

Anyone truly interested in role-playing should try an adventure as Fletch.

Irwin Fletcher was first seen working at an unnamed Los Angeles newspaper, posing as an “amiable minor league junkie” at a local beach, seeking out a drug source. A tycoon named Alan Stanwyk approached him, offering $1000 to listen to a proposition at his residence.

Once there, Stanwyk offered “Ted Nugent,”as Irwin introduced himself, $50,000 to kill him, claiming terminal bone cancer.

Without spoiling the film further, it can be stated that Fletch uncovered Stanwyk’s true motives and the drug conspiracy.

Like many 1980s movie trailers, this one is a decent intro to the movie. So that’s handy.

Fletch is a moderately tall, athletic man in his 30s.

He’s usually dressed in a light colored suit and tie when not wearing some outlandish outfit for some undercover job.

Fletch takes everything very lightly, except his job, although his editor would seriously disagree with that exception.

He also has a habit of making up a phony name out of thin air when addressing strangers – especially for his job. 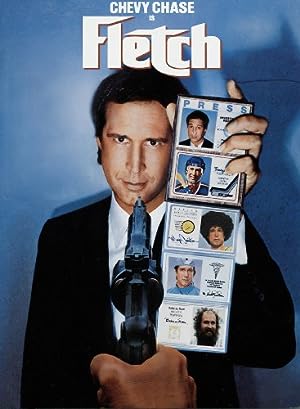