By the time she joined the International Ultramarine Corps she added a pair of rather dangerous-looking swords to her arsenal. During her time as a licensed-to-kill agent, she used lethal weapons such as firearms.

She generally operates on a cinematic  level and can handle low-level superhumans. Though she never demonstrated any power, the first mention of her implies that she has something.

Comic book tradition dictates that she counts savate among her fighting styles.

During World War II, a number of super-heroes operated in Europe. After a JSA mission to Europe in 1942, they were inspired to form a team to become symbols of the opposition to the Nazis and Fascists. These were he Legionary (Italy), the first Knight and Squire (UK), the Musketeer (France) and Wingman (Sweden).

Another big name of that era, the Gaucho, had operated in Europe along with the others. But he left when WW2 was over to return to Buenos Aires.

In 1957, in the wake of the Treaty of Rome , this intra-European coordination was revived. The Treaty established the Dome, under the impetus of African consultant Doctor Mist. Headquartered in Paris, the Dome coordinated, informed and managed the super-heroes of the member countries, like a sort of Interpol.

Its early members were the WW2 figures listed above. As they aged or were killed, Doctor Mist extended the membership of the Dome beyond the European Community. It became a clearing house for heroes throughout the world. By 1982 at the latest, these were active as the Global Guardians. The Guardians were first seen in action against Thaumar Dai.

Fleur-de-Lys wasn’t listed among the “core” Global Guardians, and thus likely joined later. She was first glimpsed in 1987.

The Dome gained the enmity of Dr. Cornelius Krieg, the billionaire and villainous head of corporation Cornelius/Krieg. In late 1987 the mysterious coordinator of the Dome, Belphégor, attempted to expose Cornelius with her agents Fleur-de-Lys and the Legionary. But it was too late and the Dome was shut down through political pressure. The Guardians were on their own.

Global Guardians Green Fury and Icemaiden transferred to the Justice League, were they became Fire and Ice. Most others went freelance, and Fleur-de-Lys transferred to a French intelligence agency called Department Gamma.

Gamma was headed by André Chavard, formerly of the Boy Commandos. Fleur-de-Lys apparently worked for them as the equivalent of a 00 agent. During these years she had a brief relationship with Deathstroke the Terminator (Slade Wilson). 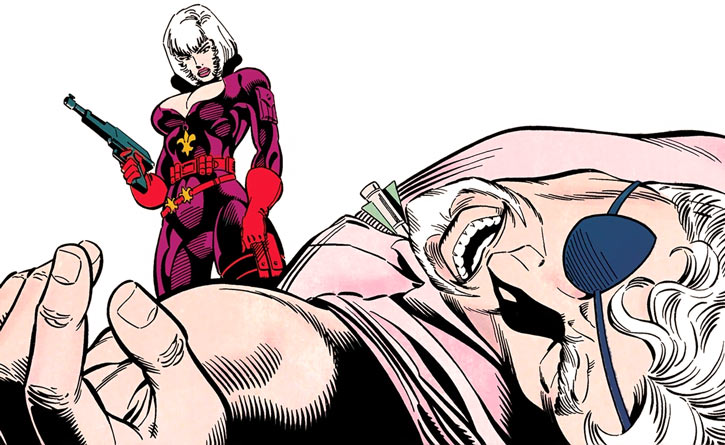 She also had a relationship with international drug dealer and seducer Jacques Morel, possibly as an undercover mission assignment. Avril did not get Morel, and Morel left her nearly dead and made her lose the boy she was a few weeks pregnant with.

In 1994, Fleur-de-Lys saw both men again. Chavard had her capture, then ally with, Deathstroke in another unsuccessful attempt to get Morel.

By the 2000s, Fleur-de-Lys had returned to her white super-heroine costume. She joined the International Ultramarine Corps, but was not part of the dedicated core of the team. She operated with less committed contributors such as Vixen and Global Guardians alumni such as the Olympian and Little Mermaid. She seemed especially close to the Tasmanian Devil. 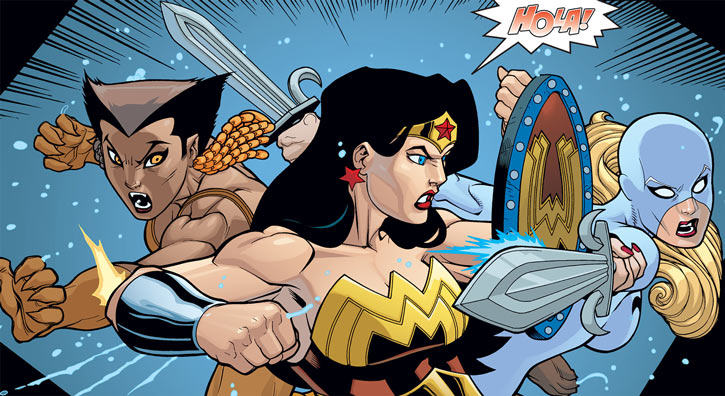 The Ultramarines weren’t generally successful – see the team profile for more. In 2005, their whole roster fell under the sway of Sheeda spineriders as a result of a trap set up by Grodd and the Nebula Man. They were freed by the JLA.

Though the JLA now opposed Ultramarines operations, they agreed to send them on a mission inside the Nebula Man, who was actually a miniature universe. The reality inside was getting corrupted by evil, and it was hoped that injecting super-heroes into the mix could save this small universe.

It proved impossible to put an end to this corruption. However, the Ultramarines (including Fleur-de-Lis) engineered some sort of universal toxin that would make it possible to destroy the Nebula Man if he became too much of a threat. Their work was later used by Frankenstein, based on information from S.H.A.D.E., to prevent the Nebula Man and the Sheeda from devastating Earth.

FWIW, the Fleur-de-Lys has been a formal symbol of French royalty since at least Louis VII, though heavy usage started in the VIIIth century, before Charlemagne. White (for instance, in the middle third of the French tricolour) is also a symbol of royalty, based on the use of a white cross during the late Middle Ages. Whether this means anything about Noëlle Avril is unrevealed.

Fleur seems to be serious, dutiful and disciplined.

When she stopped being a super-hero and became a super-agent for Department Gamma, she seemed meaner, more sarcastic. She was a tough-talking fighter who remorselessly used lethal force against anybody using deadly weapons against her. It is possible she was influenced by the ruthlessly pragmatic and double-crossing Chavard, who seemed to seek to make her a deadlier agent.

In the field she prefers to use subterfuge, stealth and subtlety rather than brute force.

(Predicting Deathstroke’s tactics) “A plan would indicate subtlety. You’re just going to march in and take him.” 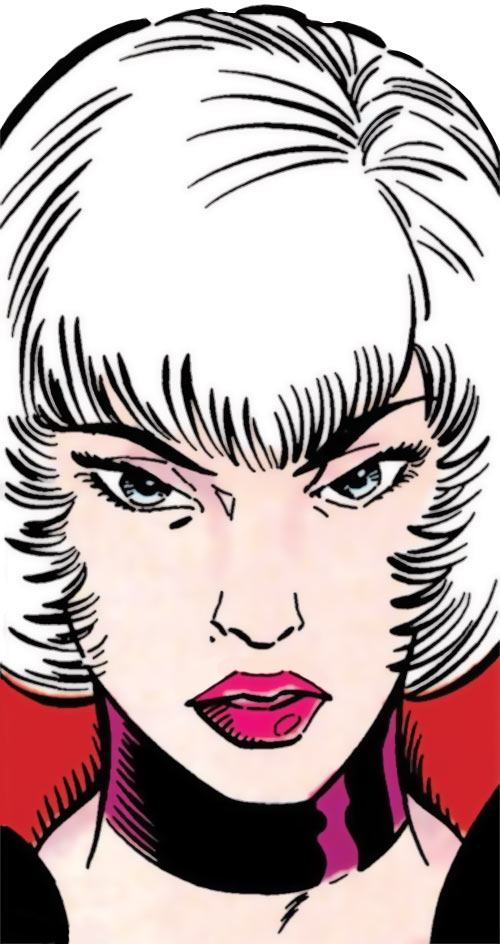 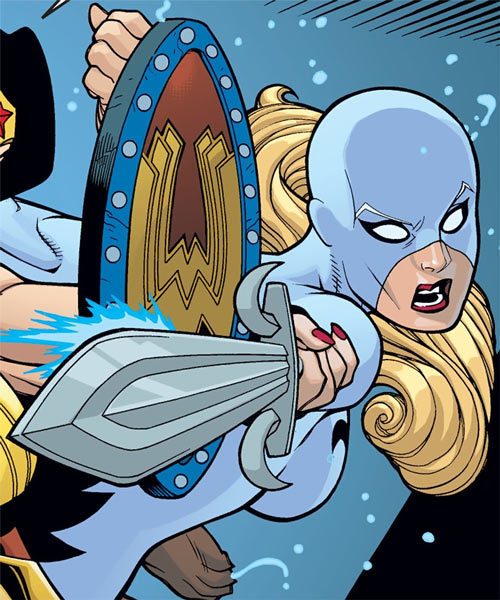 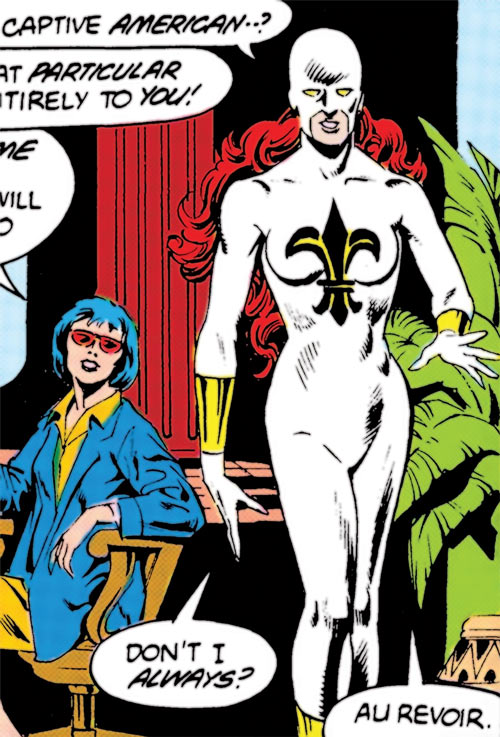