After years of experimentation, Doctors Joel and Joshua Williams perfected their greatest creation : Flexo the Rubber Man ! Flexo the Rubber Man is an artificial being, a sort of construct built out of “living rubber, filled with a secret gas, and operated by remote control”. For all intents and purposes, just consider him a robot.

This robot is intelligent and sentient. But the two doctors see fit to control him via remote radio link most of the time. And, most of the time, they use him to fight the scourge of crime !

Flexo has been seen during no less than four separate missions against criminals.

The first was to prevent the evil Doctor Murdo from fashioning a death ray using stolen radium.

The second saw Flexo retrieving a secret “torpedo repeller” that the spy Karl Damos had stolen from the Williams Doctors.

Later, Flexo was seen bringing the arson spree of the diabolical Iron Duke to a screaming halt.

His final mission brought him to Germany (well, more or less) to rescue the Williams Doctors and their experimental explosive formula. They and their formula had apparently been taken by German operatives for some evil purpose or another.

After this, the public saw little more of Flexo the Rubber Man. He seems to have drifted off into obscurity for the rest of World War 2, and beyond. Of course, there are a few interesting questions about Flexo that can lead to further adventures revolving around his person, both good and evil.

For instance, the two Doctors that created Flexo could operate him via a radio link, basically telling him what to do. Now, the big question is whether or not he wanted to help them out, or if his very will was tied to that radio link. If he isn’t beholden to it, he could very well be living out a life all his own somewhere isolated.

Well, Flexo doesn’t have a costume, per se. Unless you count the pot-like helmet he wears at all times.

In appearance, Flexo looks just like the Michelin Man , though red, but always with a smile on his face.

It is known that Flexo is a sentient being, and that he has a desire to help people by fighting crime.

However, for most of his known appearances, he’s been under the control of his two creators, who likely don’t care too much for the notion of his freedom.

He could easily be a prototype of the Metal Men (or similar robots). In fact the (pre-”we were humans all along”) Metal Men might find out that he is being used and try to free him.

Bonuses and Limitations:
Radio Communications only represents the range at which he can be controlled by his creators. 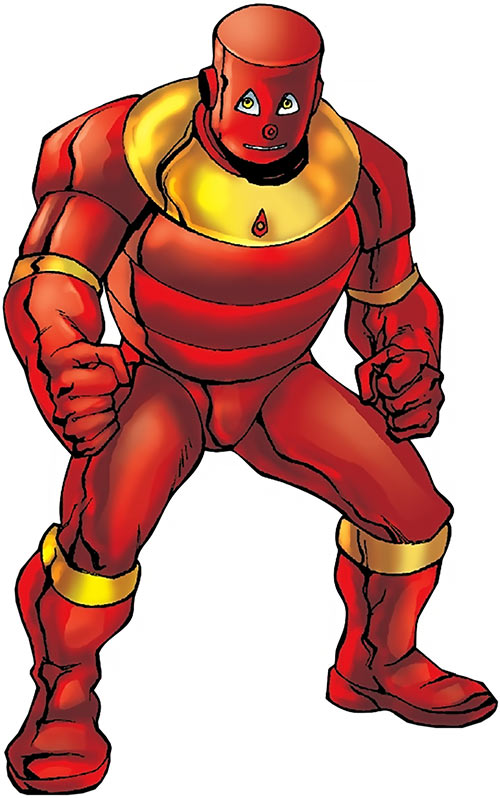